Jackson Audio may be a new name in the pedal world, but the folks behind it have an established pedigree of boutique excellence. 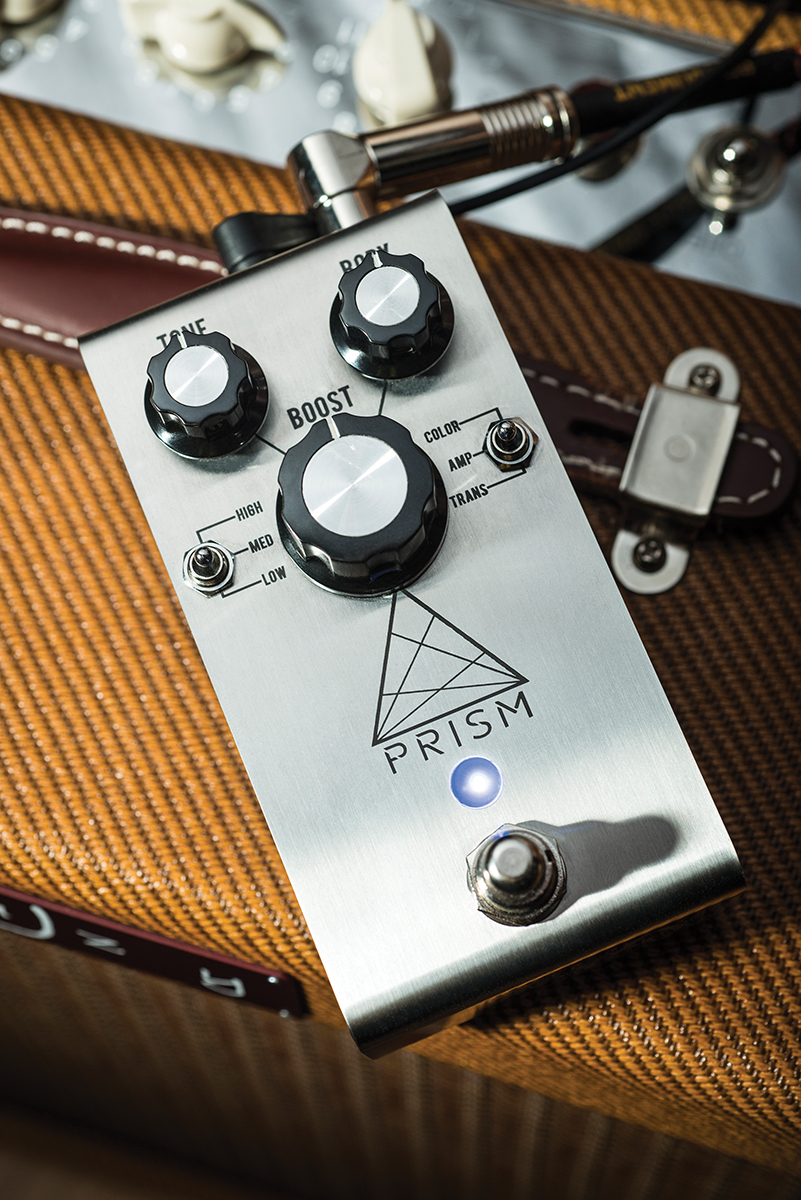 Founded in 2010, in Fort Worth Texas, Jackson Ampworks has become synonymous with high-quality boutique amplifiers made entirely in the USA. This new brand – Jackson Audio – is an offshoot company created with the intention of applying the same no-compromise ethos to the design and construction of a range of pedals: the first being the Jackson Audio Prism.

On paper, the Prism is a very versatile unit with a number of subtly different possible applications such as clean boost, FET preamp, transparent overdrive, buffer, amp simulator or any variation thereof. Given the boutique price point, this pedal is clearly aimed squarely at the sort of tonal apex predator who demands only the very best – and there has been an established marketplace for this kind of unit (arguably initiated by Bill Finnegan’s Klon Centaur) for decades now, with a wealth of boutique builders vying for the attention of the well-heeled sonic sommelier.

Brad Jackson of Jackson Audio describes the way this pedal functions as being identical to its namesake; splitting the “white light” of your original signal into an array of distinctly beautiful colours. Could this be the cover of The Dark Side Of The Moon in pedal form?

The first thing that strikes us upon opening the box is the weight. With a custom-designed stainless-steel chassis, laser-engraved artwork and some of the most rugged construction this reviewer has seen, the Jackson Audio Prism gives off an immediate sense of high-quality build. The smooth-turning knobs and heavy-duty switches offer a reassuring aura of permanence. This is clearly a piece of kit intended for decades of time-zone-straddling world tours… it could conceivably outlive several generations of owners.

The Jackson Audio Prism features a charge pump that converts a nine-volt DC charge to 18 volts for the transparent JFET circuit, active EQ and buffer circuit. Dutifully applying the requisite voltage and assembling an auditioning committee of Gretsch, Gibson, Fender and Supro instruments – featuring Filter’Trons, PAFs, Stratocaster single coils and Vista-Tone pickups respectively – we set about putting the Prism through its paces. 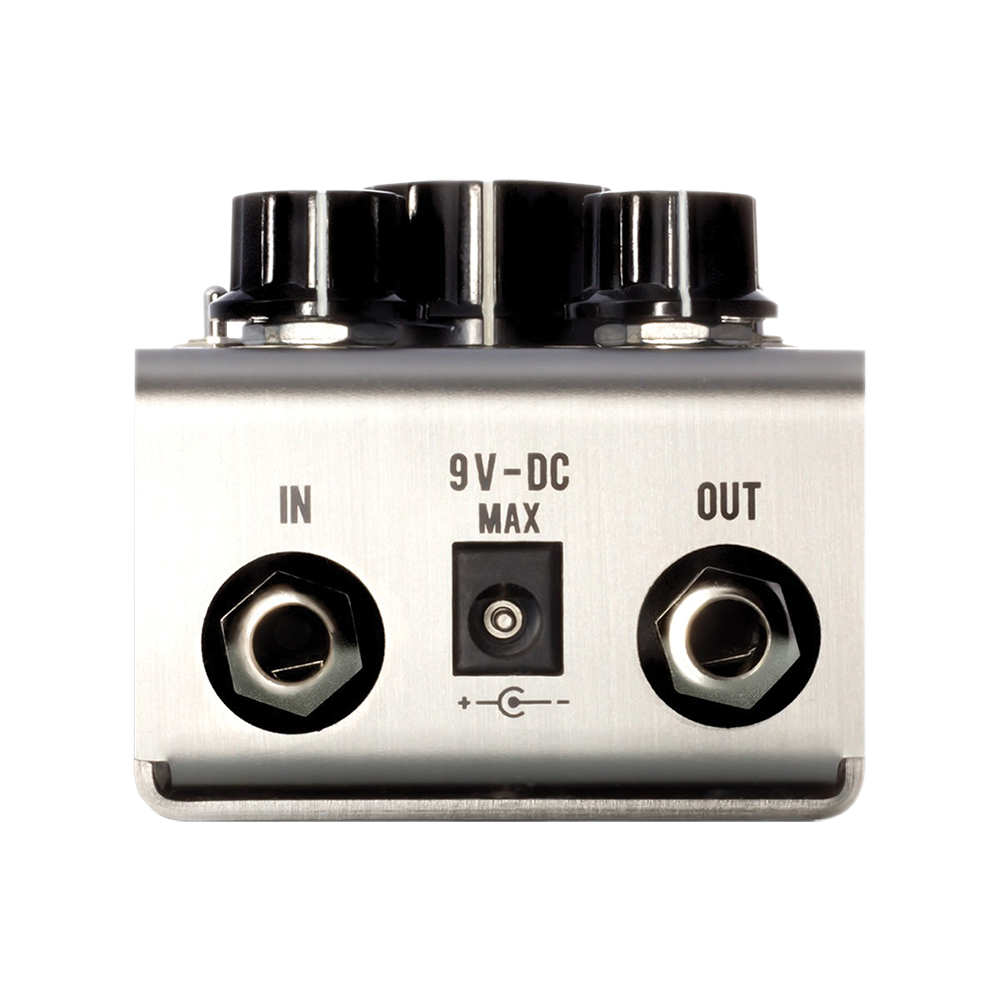 While at first glance, operating the Jackson Audio Prism may seem complicated, the control array is intuitive enough. It’s perhaps helpful to think of the Prism in terms of ‘threes’. There are three control knobs, three switch-activated gain levels and three ‘character’ settings. Ignition is made noiseless by the relay-based true-bypass circuitry, with no pops or clicks. Those of us with more complicated pedalboards know the pain of unwanted sonic detritus all too well. With the Prism, we can breathe easy.

Let’s look at the tone knobs first. The tone control handles the treble and the body control sculpts the bass response. The largest of the three, the boost knob, will give you a fearsome +/-15dB boost or cut capable of bringing your amp up to full chat very quickly indeed. There’s a lot of potential to work with here.

In practice, we found the tone makes the trebles silky and delicious, giving a sophisticated sheen to the gnarliest of sounds (we’re looking at you, Supro…) while still retaining character. As with the very best pedals, the body (bass) control works in a way reminiscent of the proximity effect experienced with a high-end cardioid studio microphone, adding depth and presence to the sound without getting muffled.

To the left of the boost knob, we have the first of the Prism’s two mini toggle switches. Bearing the legends low, med and high, this is a pre-gain switch that decides how hard the pedal boosts your signal by activating one of three incrementally higher gain levels. Low will get you to x2 unity gain, med covers all bases from clip to crunch, and high gets you where you need to be for tasteful, expressive soloing. Think early-Soldano-meets-Two-Rock levels of gain, rather than brutal, face-melting distortion here.

While it’s not the most important aspect of this pedal, it’s worth noting that the LED light changes colour smoothly from white to blue to red depending on the amount of gain you’re using, for a visual indication of the current state of affairs. It also – and this is perhaps where it will find its most appreciate audience – looks achingly cool. It has been pointed out, not unfairly, that guitarists as a species often have something of a weakness for shiny things. This is one of those things.

Finally, we have another mini three-way switch that dictates the character of your sound. Your first choice is trans, a completely transparent JFET circuit which leaves the integral timbre of your instrument untouched (it was so clear, in fact, that when we plug in a hand-made Jason Kostal Modified Dreadnought acoustic, the results are nothing less than studio quality).

Next up, we have amp: a MOSFET circuit that, as the name suggests, gives you an amp-like response: the mids become more prominent and there is an extremely authentic valve-style response and feel. Finally, we have the color switch which uses a silicon transistor for a Vox Top Boost sound, very effective indeed for cutting through a band mix. Sonically, the standards are as high as the build quality of this pedal, with a detailed and characterful response across its wide sonic spectrum and a huge amount of tonal versatility.

The Prism is an extremely high-quality pedal that, with its combination of solid tones, encourages you to play better and enjoy the creation of every note to the full. While it’s targeted at an increasingly crowded marketplace, this needn’t detract from the fact that the Prism is an impressive debut from a new company that lives up to the ethos with which it was founded. 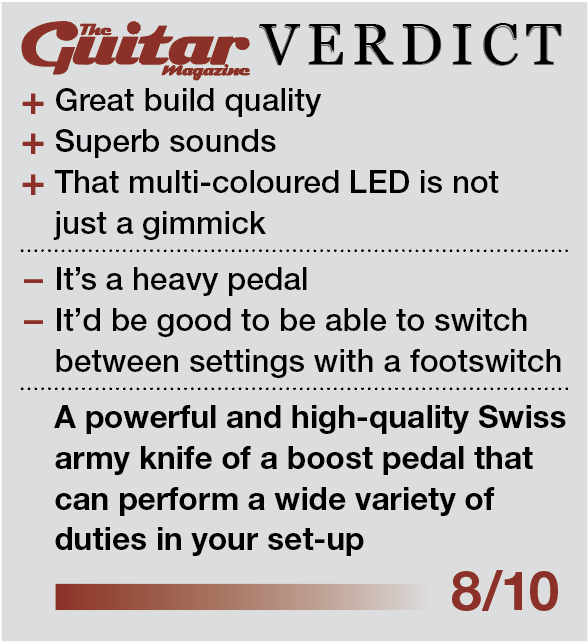