Former Megadeth man Marty Friedman needs a guitar that’s built to shred, and this affordable Jackson seems to fit the bill. Darran Charles from Godsticks straps in and gets ready to rock, and also speaks to the man himself… 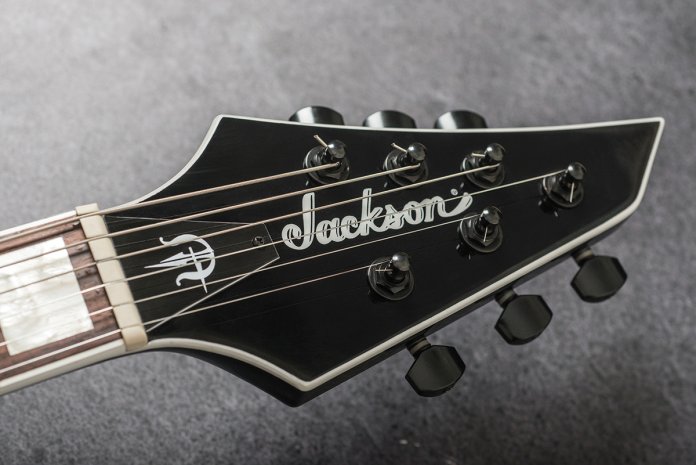 Such is Marty Friedman’s synonymity with Jackson guitars, many casual observers would probably be surprised to learn that he there was a time when he wasn’t playing them, but the former Megadeth man and all-round shred titan did spend three years with PRS before returning home in 2017.

“When I came off the Inferno [his last solo album] tour Jackson had big plans that they wanted to include me in,” Friedman explains when asked why he came back to the brand. “And after many talks with the people there, I felt I could make a bigger creative contribution to Jackson than I could with PRS”. And with that, the prodigal son returned with a brand new signature model. 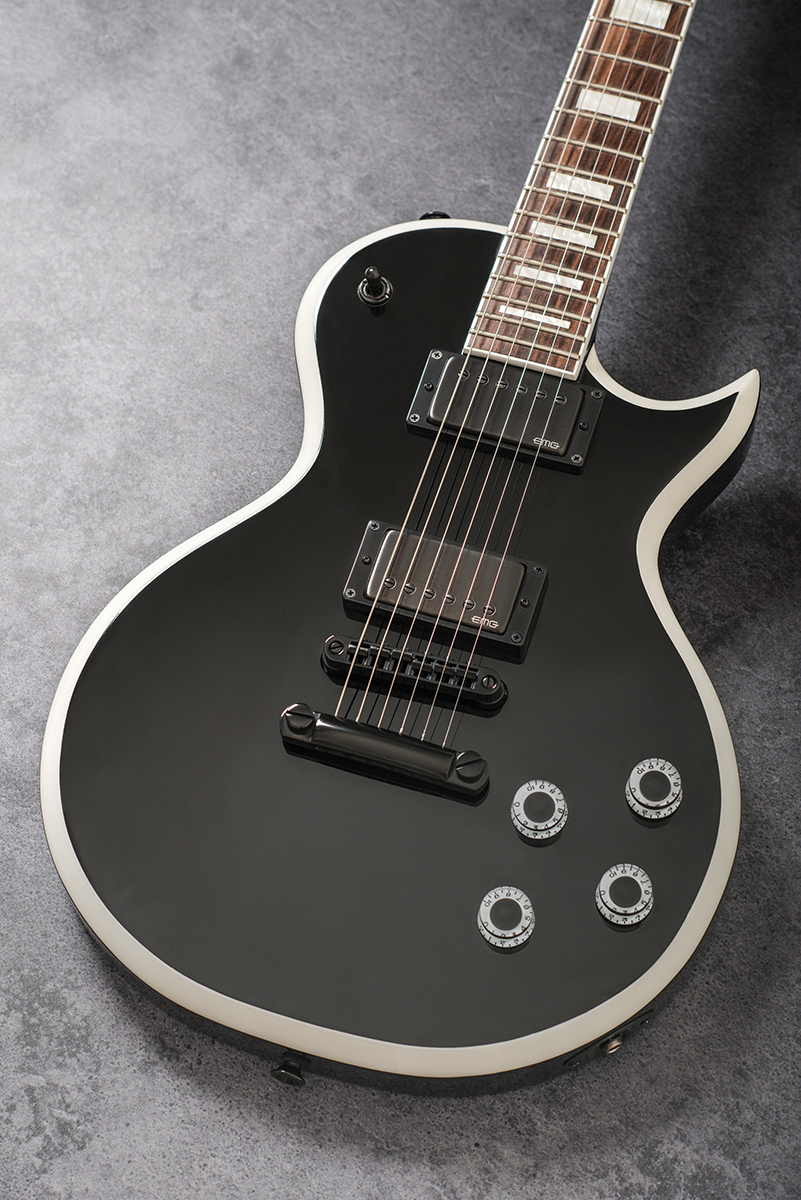 His time with PRS clearly had an effect on Marty, however. His previous Jackson signature, the Kelly, was a Explorer-inspired design, but after a few years playing a Singlecut, he’s opted to make the similarly vibed Monarkh body shape the basis for his latest squeeze.
“I’ve discovered that a Les Paul-style shape, while looking rather normal and plain when in its case, looks fantastic on just about anyone,” Marty explains of the MF-1’s single-cut shape. “You can’t take a bad picture with it!” 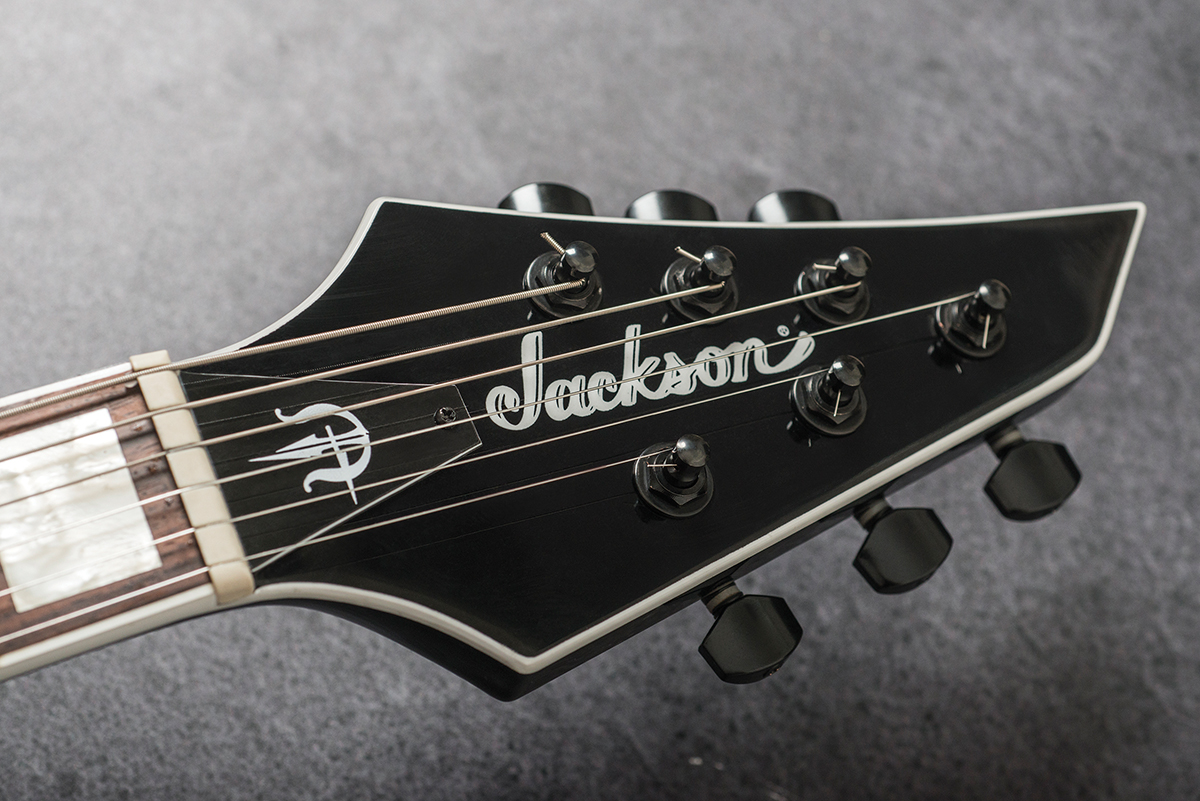 There’s just one finish available on the MF-1, and it’s an appropriately glossy black – but with striking white bevelled edges that add an almost playful air to what might have otherwise been a very sinister looking guitar. The body is constructed of nato – a wood that has similar tonal properties to mahogany – with a set-neck sporting a rosewood board and bound edges. Slimmer than a Les Paul with a body depth of 46.7mm, the rear of the lower horn has also been extensively carved to allow unrestricted upper-fret access.

The black gloss finish extends to the back of the neck, which is a comfortable, familiar-feeling C shape. At the other end, the three-per-side AT-1 headstock is constructed so that the strings run perfectly straight through the nut into their respective locking tuners, providing maximum tuning stability – a definite advantage for an artist known for his expressive bending work and tone-wide vibrato. 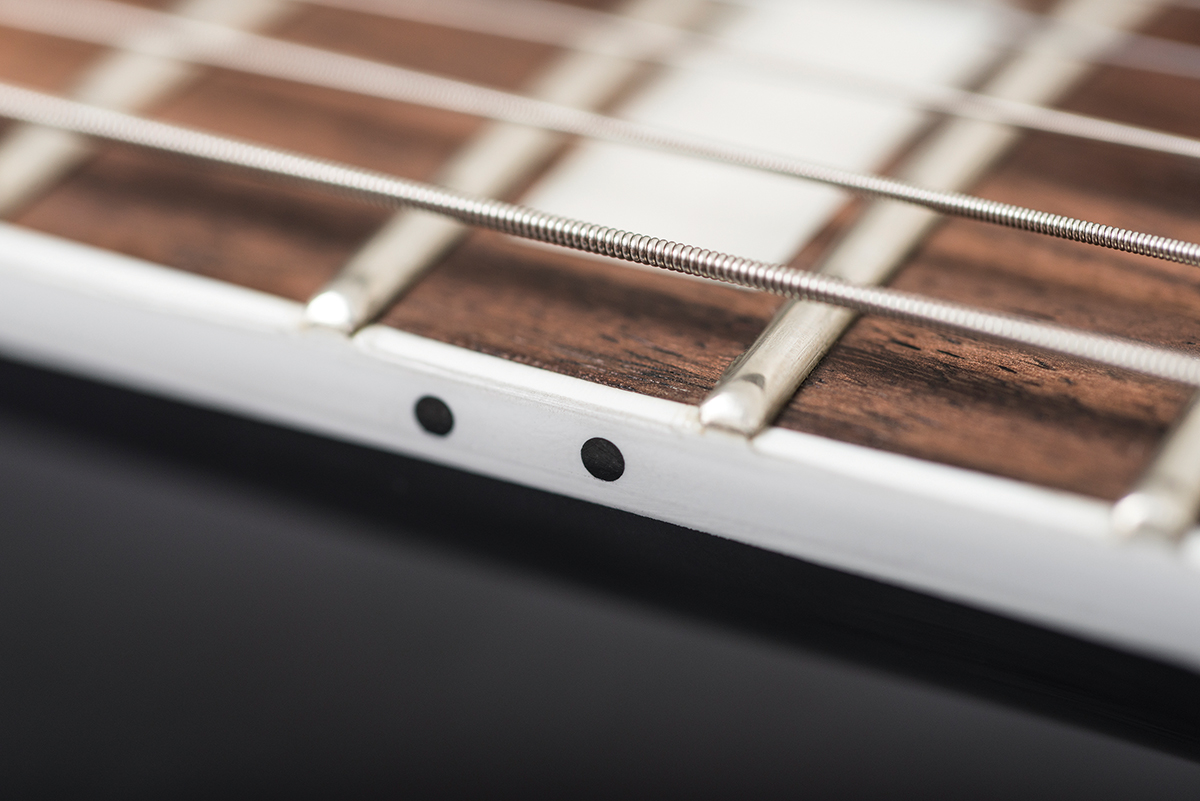 It’s a weighty beast but it’s a weight comfortably distributed when strapped on, and this reviewer never experienced any shoulder fatigue during use. The white bevelled edges, although likely only present for aesthetic reasons, provide a comfortable surface on which to rest your forearm, contrary to the forearm burden sometimes provided by the lip of carved-top guitars of this shape.

The 12-inch radius of the fretboard insures against fretting out while still producing a comfortable enough curvature for chordal work. Despite the high-gloss finish to the back of the neck, it’s a slick surface for the thumb, and quick navigation up and down the neck produced little in the way of friction. 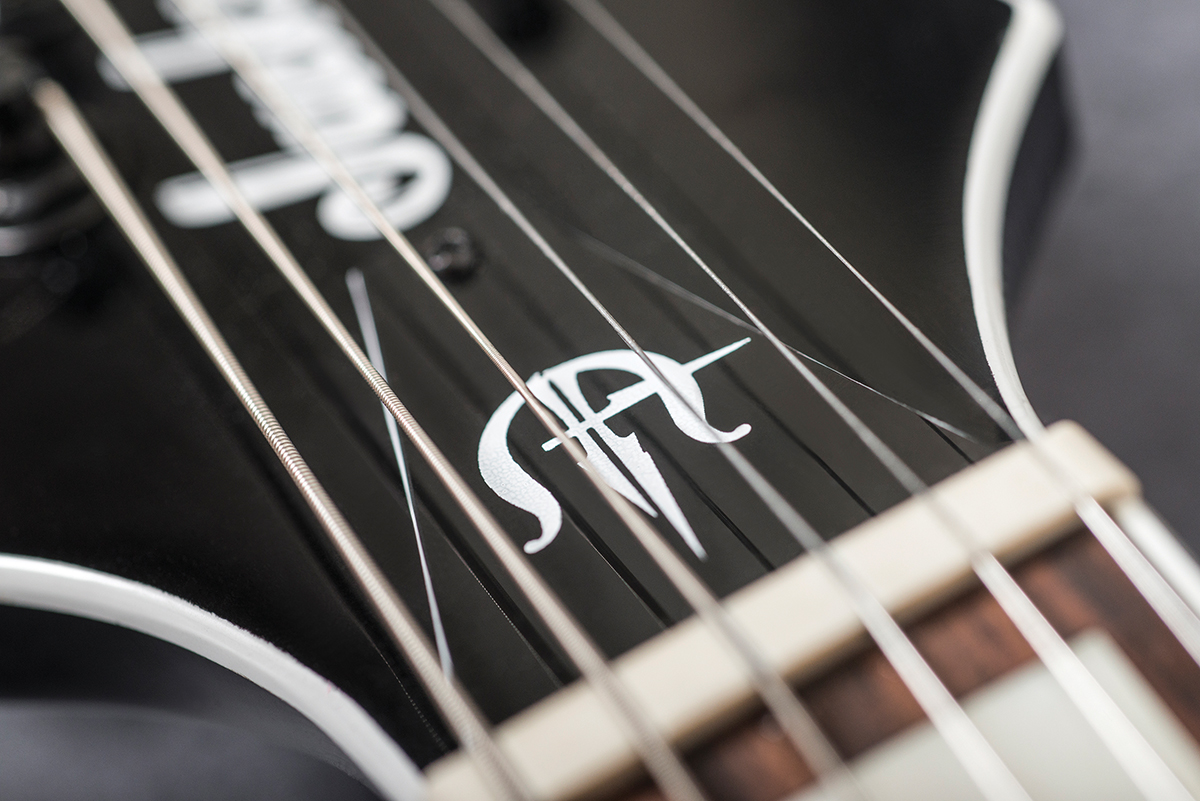 A black single-cut loaded with EMGs (albeit passive ones) is never going to be a shrinking violet in the gain department, but when played through a Bogner-style patch through our Axe-Fx III, we find more of charismatic but powerful heavy rock than the gain-laiden metal we were expecting. Most notably, the pick attack is round and dare we say ‘tuneful’.

This pick attack doesn’t dominate the sonic landscape, however, even when attacking the strings with speed and gusto. It’s unusual for the harmonic produced by the pick at the point of impact not to have a greater influence on the sound, and it’s to Jackson’s credit that it doesn’t. 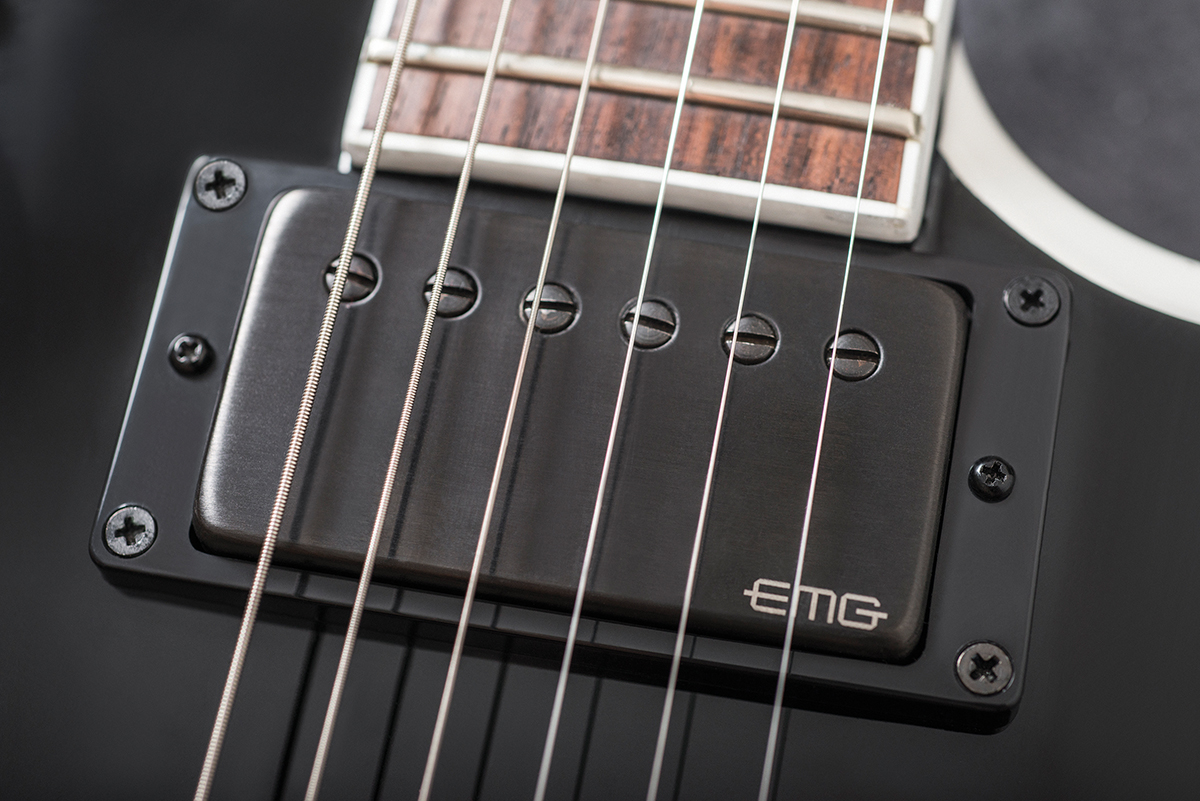 With its none-more-metal looks, you’d be forgiven for not expecting much versatility in the clean department, but running the MF-1 through a Twin Reverb patch soon proves that assumption wrong. The full-bodied clean tone you would expect from humbuckers is all present and correct, and indeed the extra power provides wonderful clarity for arpeggiated chords. Even more surprisingly, digging in for lead lines produces a dynamic response not entirely dissimilar to the neck pickup of a Strat. EMG pickups often get a bad rap for their perceived lifeless clean tones, but they can prove to be quite dynamic if you know how to set your amp up to suit them.

While Friedman is famed for having a particularly unorthodox playing technique, you don’t have to play like him to enjoy this guitar. This is a true metal workhorse. 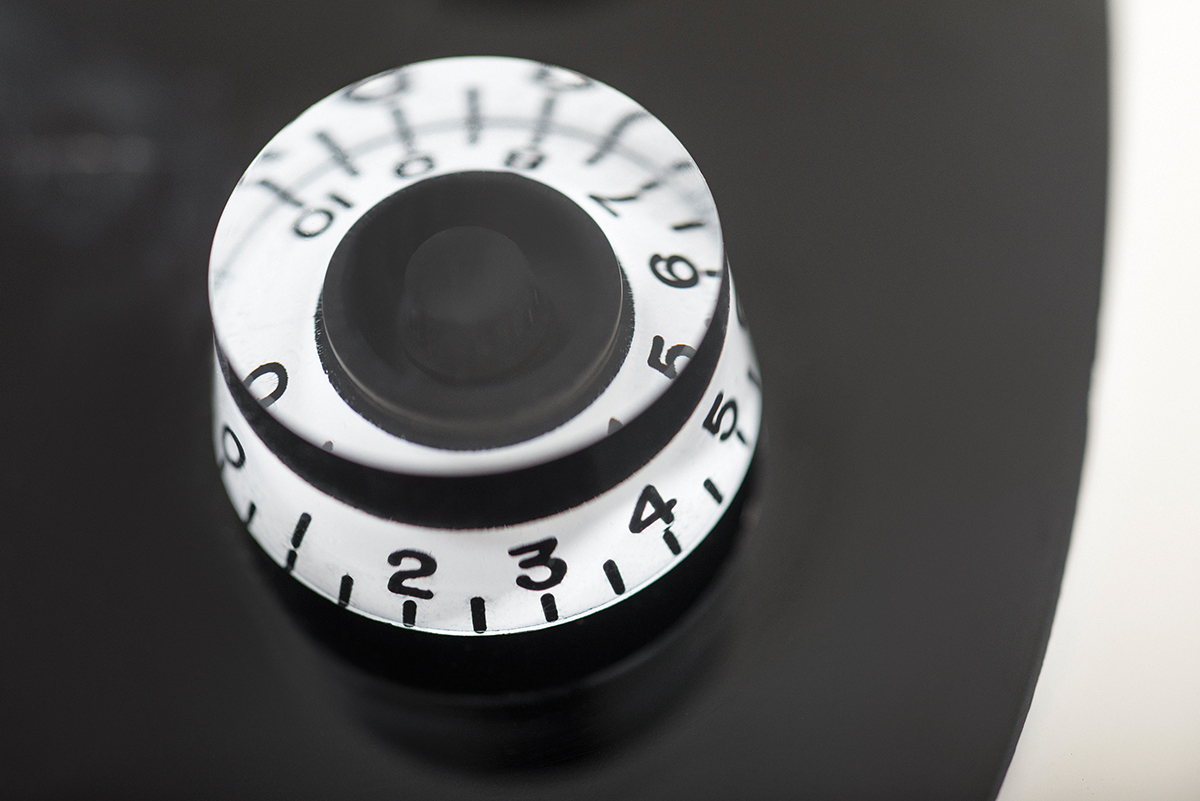 What really makes this guitar stand out in a crowded market, however, are Friedman’s signature EMG pickups, and it’s great to see such high-end units still included on this Indonesian-made model. Their tight and punchy delivery of rhythm work, while still producing the necessary output for soaring lead, is a difficult balance to achieve without the sound being too squashed or too uncontrollable, and this has led to the production of a guitar that can easily cope with any style of hard rock or metal that you throw at it. 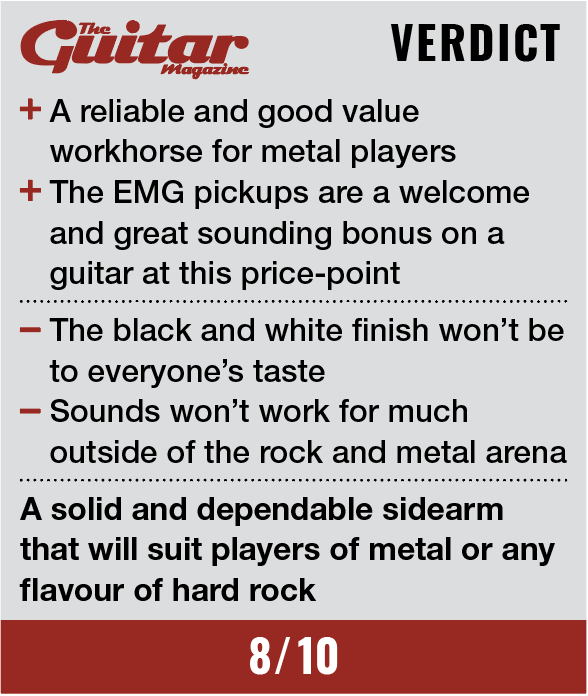 INTERVIEW: Marty Friedman tells us about the development of his new Jackson signature model, pickups and more… 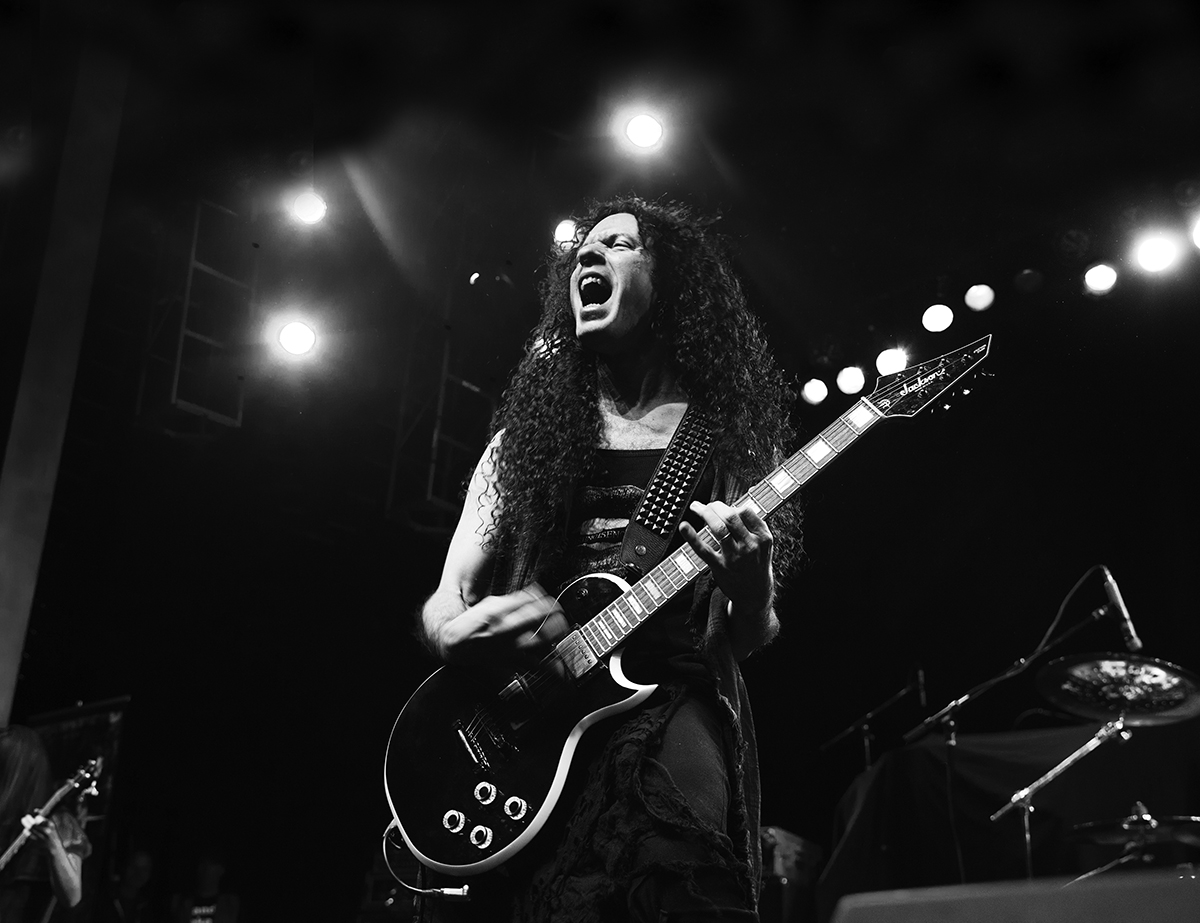 Your new Jackson signature guitar is very different to your last one – how did you go about developing it? Did you go to Jackson with a very specific design from the outset, or was it a gradual process of trial and error?

“People know me from my signature Kelly, and as much as that was an iconic guitar, I am not the type to get nostalgic and try to do something I’ve already done before. So, my main objective was to have Jackson do something equally as cool, but new. Not to compete with the Kelly, but to be a different animal altogether. At the same time, we wanted to improve on the Kelly wherever possible.”

You’ve been playing guitar for a long time now. What things have you discovered are important to you in a guitar’s design?

“That a guitar is also an accessory. Think about it: you take hundreds, if not thousands of pictures with it every year, so you want it to be something that looks good on your particular body and playing posture. Some guitars look absolutely amazing in the case, but when you stand with it, it just looks weird; or stands out in an awkward way; or doesn’t complement the curves and lines of your body. I used to have a Dean ML, and I looked like an absolute dork when I had it on. But Dime always looked amazing with them. Different things work for different people.”

The MF-1 also features your new signature EMG pickups – how do they differ from other EMG pickups?

“Being passive is a must. Battery-operated things, especially pickups, can have sweet spots in regards to how much power is left in the battery. I want to be in the sweet spot all the time. I went back and forth with EMG to develop the ultimate passive pickup: one that can match that great EMG active heavy sound and have really human sounding warmth as well. I used the prototypes for this pickup all over my Wall Of Sound album. It was the ultimate testing ground. I absolutely love these pickups; they give the MF-1 a warmth that I was missing with the Kelly.”

You’ve often described guitars as ‘tools’ – do they really not hold any more romantic value for you?

“The guitar itself never, ever is what inspires me. Of course, when you like the sound, the touch and the consistent tuning of a guitar, it is much more of a joy to play than a guitar that doesn’t give you those things; but I firmly believe the guitar is nothing but a work tool. It’s a vehicle to get whatever music I am making out of me, and deliver it to whoever is listening.

“For that reason, I want a reliable vehicle and I’d like to arrive in style, too. Like a Benz, it’s not the most expensive vehicle out there, but it’s solid as a rock, and makes the owner look great. Some of the crazy-expensive sports cars are so ultra-cool that they take the focus off the driver and put the focus on the car itself. They tend to need a lot of repairs too: those are qualities I wouldn’t want in a guitar.”

Do you experiment with different guitars in the studio when recording an album?

“I don’t like to, but I do experiment when I’m not getting magic. Sometimes the guitar you least expect to be great, sits in the track so nicely you get magic. Still, if a guitar keeps a good tune and sounds awesome, I’ll just go with that because I truly hate noodling around trying to find a sound.

“When I’m in the studio I’m so focused on the music I’m making, that doing anything other than actually performing the music is a nuisance. If you start out with a great workhorse instrument, you don’t need to waste too much time experimenting.”

Do you think players can be too focused on gear at the expense of exploring their craft?

“Some people are really suited to tweaking gear, doing it smartly and getting great results. I admire those people, but I don’t have that in me. But I will play the same phrase 100 times with different fingerings, timings, tweaking the most subtle nuances and accents of the phrase until I get the magic. I put all of my energy into the music itself and the way I interpret it. I try to surround myself with great techs and engineers to twist he knobs until it’s sonically good. Those people must be focused on gear.

“There are some greats out there who honestly love tweaking gear and are making fantastic music too – Devin Townsend is one of these anomalies. However, I do fear that in the amateur world there may be a lot of people who are constantly talking about gear, comparing gear, praising and badmouthing gear, to the extent that it saps them of precious energy that might be better spent on the actual music they intend on making.”