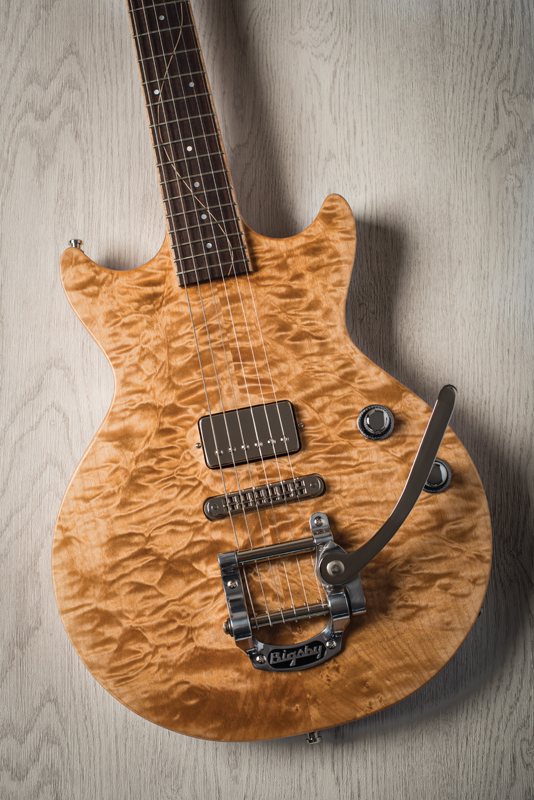 Should I be forced to choose a single word to describe the James Collins GTA, it would have to be `formidable’ – in looks, feel and weight. It’s an absolute timber-fest, too, with a one-piece Honduras mahogany body and a book-matched, flat-quilted maple top cap.

The mahogany neck is set into the body with a mortise and tenon joint and there’s no back angle. The neck has a multi-layered construction with a maple/rosewood/maple stringer all along the centre. More quilted maple is used to bind the rosewood fingerboard, which features a maple `wave’ along its length that continues through the rosewood peghead veneer.

There’s even a thin layer of maple veneer beneath the rosewood front, which adds definition to the GTA’s headstock shape. It’s all high-quality timber, and a very thin, almost perfect, high-gloss polyester finish really enhances the grain.

A single Bare Knuckle Black Dog humbucker teams up with volume and tone controls. Collins has come up with the novel approach of seating the T-style knobs in T-type jack cups. The controls must have been pulled into the body through the pickup rout, `ship in a bottle’ style, because there’s no control cavity cover on the reverse. 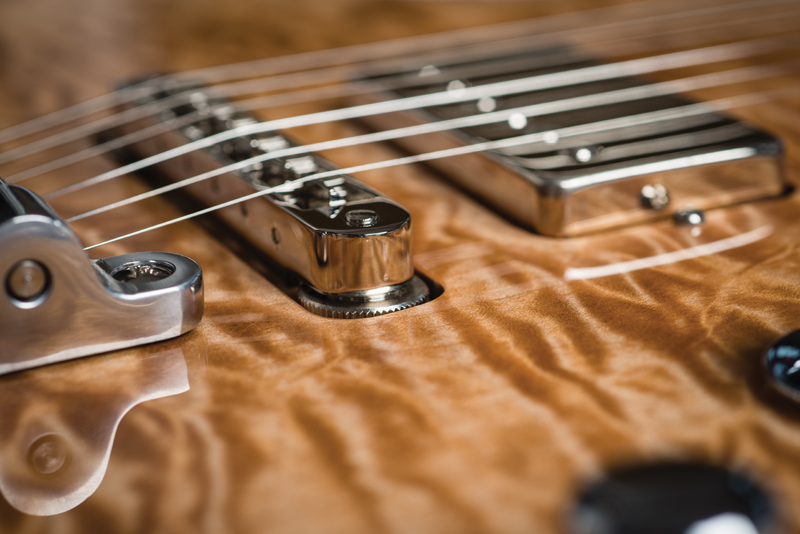 The sides of the fingerboard are bound with maple but not the end, which effectively shows that the `wave’ isn’t simply an inlay. In creating the wave motif, Collins demonstrates his impressive woodworking skills by hand-cutting and re-joining the two separate parts of the fingerboard with a maple layer in between. Unfortunately, the finish at the end of the fingerboard does look a bit scruffy when it’s compared to the rest of the guitar.

GTA models are built to order, so many of the specifications given here can be changed. However, the standard features include a medium `C’ neck profile, medium frets, a Jensen paper/oil tone capacitor, a Bigsby B5 tremolo and a Hiscox hardshell case.

There’s an art to carving `fat’ necks which feel wonderful, rather than just, erm, fat. The GTA’s doesn’t quite hit the mark, and my recent experience with mid-1950s Les Paul Goldtops provided clues to explain this – when studied closely directly from the back, the binding on the vintage Gibson necks was clearly visible and I could even make out the dots.

When the GTA is examined in the same way, the binding can’t be seen on the neck, which indicates that the profile is more of a straight-sided `U’ than a `C’. The upshot of this is that it fills the hand but doesn’t have that `comfortable as old slippers’ feel. However, Collins will work with customers on an individual basis to achieve the neck profile they desire.

Having a neck with no back angle has possibly had a knock-on effect on the positioning of the Bigsby. Since the strings are closer to the body at the bridge position than they would be on, for example, a Les Paul Junior or Standard, the tune-o-matic bridge is obliged to sit in a routed recess. 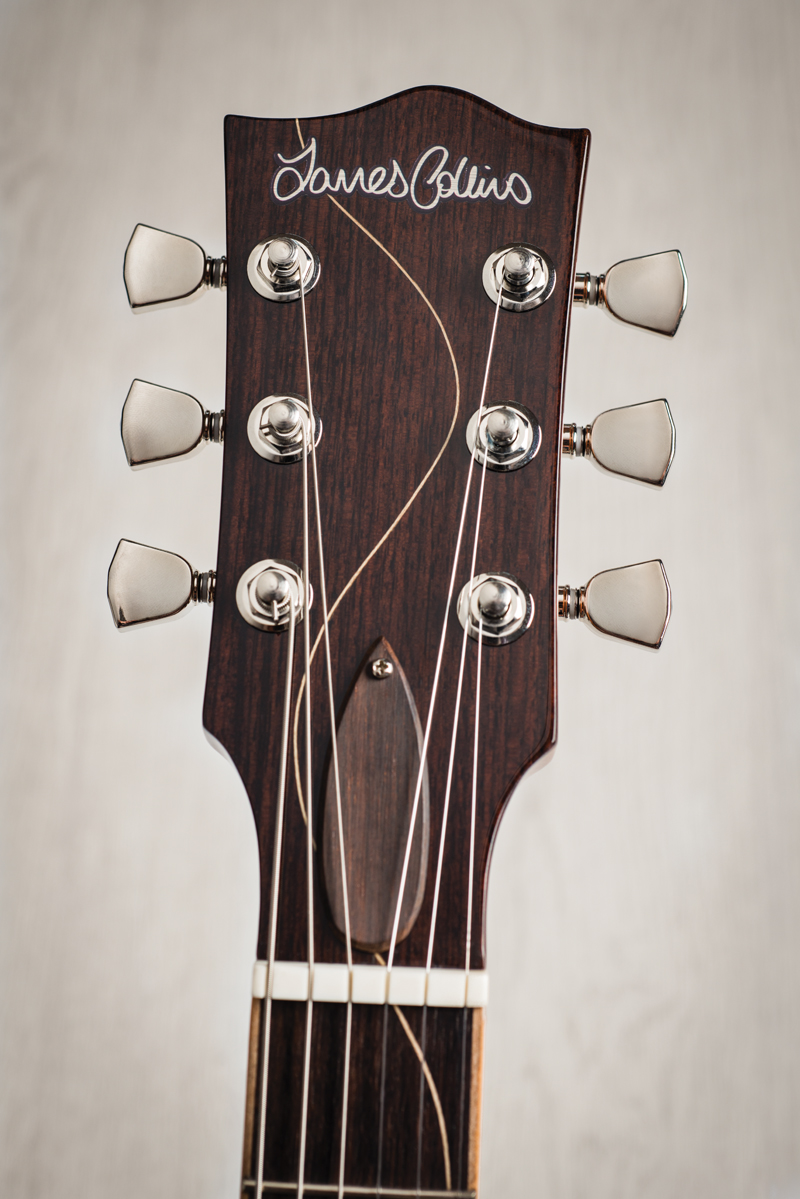 One requirement when installing a Bigsby is to achieve an adequate break angle over the bridge. Because the GTA’s bridge is relatively low, the Bigsby’s front roller is positioned a little closer to the bridge than might otherwise be the case, simply to make the break angle more acute.

The upshot of this is that the position of the Bigsby, combined with the recessed bridge, meant I had to be careful to avoid hitting the Bigsby with my wrist.

Acoustically, there’s not a great deal of woody resonance, but the GTA sustains exceptionally well and there’s an even volume balance across all of the strings.

Starting with clean tones, the GTA delivers a surprisingly jangly and lively tone with snappy definition and a characterful hint of phasiness from the wound strings. The pickup isn’t at all microphonic, so it can’t quite match the airiness and open treble of an accurate PAF replica, but you can be confident of a squeal-free high-gain response.

The power hinted at by the clean tone comes to the fore when overdrive levels are increased. The bass end’s solidity and considerable depth become more apparent and the nasal midrange is transformed to a honking, raunchy bite.

Moving on to high-gain, the GTA is really in its element. Powerchords sound appropriately huge and lead tones combine full-bodied bite with crisp pick attack and sustain. Although there’s no treble bleed capacitor across the volume control, you can still back it off to clean up the sound while maintaining a consistent frequency response, clarity and body.

Compared to any two- or three-pickup guitar, a single pup will offer a limited range of tones. However, well configured volume and tone controls should still allow you to cover a lot of ground. The GTA has both, but access is somewhat restricted by the Bigsby and the T-style jack cups. 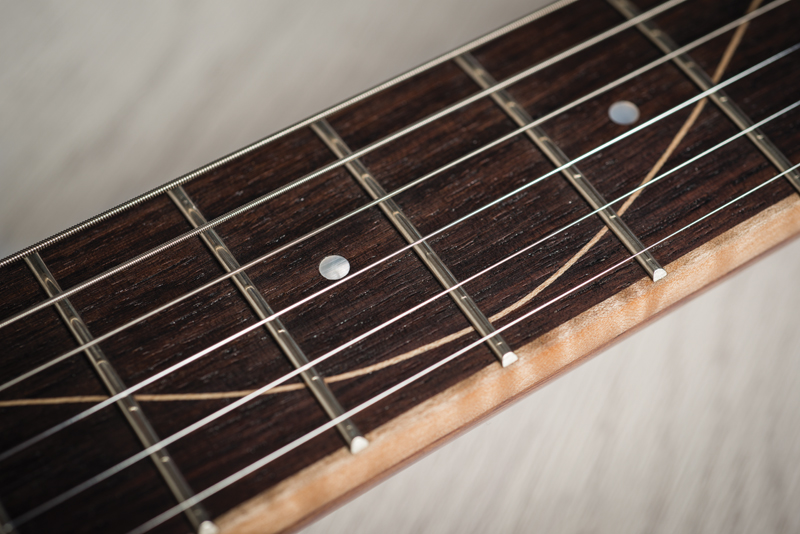 The latter are a neat idea, but viewed from the side you’ll see that they sit proud of the top. Maybe a chamfered edge would allow the cups to sit a little lower, to expose more of the control knob and provide better access. It’s workable as is, but this tweak would really improve their usability.

Ultimately, the GTA has the sound, feel and (to some extent) look of a type of custom-built guitar that a really good luthier might have produced in the late 1970s or early 1980s. If you like to dial in a tone and keep things simple, then the GTA could really work for you.

It’s obvious that the GTA has been made with genuine love and care, and that Collins has incorporated some really good and original ideas. There are some minor details, which I feel aren’t quite on the money, but I’m left with a sense that the best is yet to come from this very talented guitar builder and I look forward to seeing more of Collins’ work in the future. 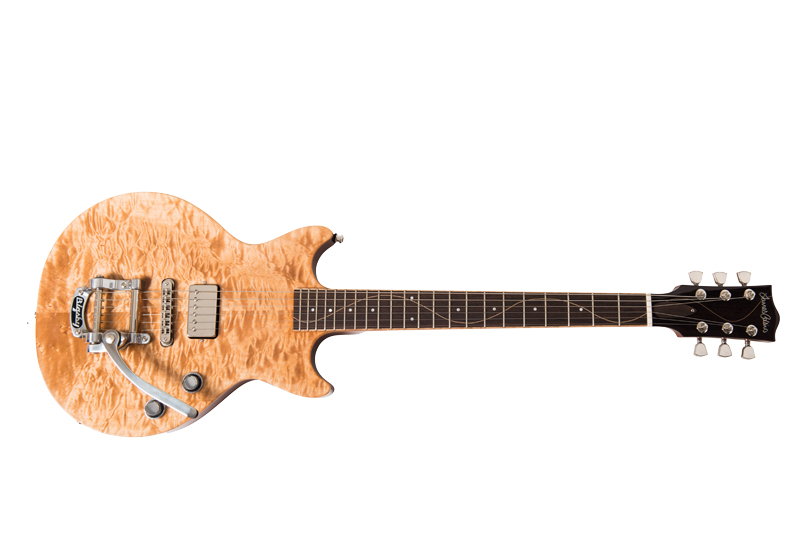 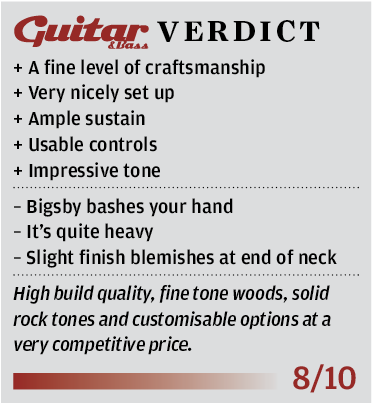