Vintage Supro and Silvertone amps are pretty scarce in the UK. Can you get their sounds from these pedals? 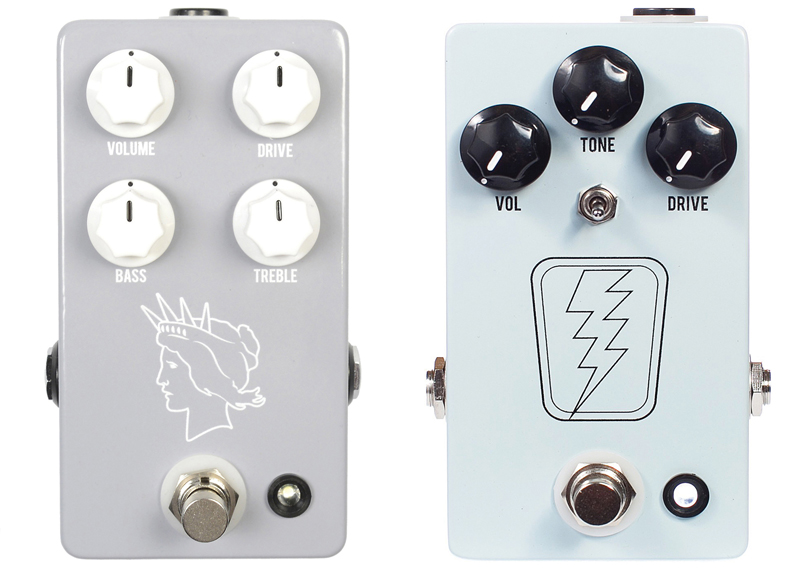 Like many boutique stompbox companies, JHS started out with one guy in an apartment trying to repair a broken pedal. Josh Scott was so pleased with the outcome of that work that he was inspired to learn more. A period of pedal modding followed, until his technical understanding reached the level where he began designing his own pedals from scratch.

Although JHS has grown as a company, it’s still a hands-on operation with four full-time builders and a few extra support staff servicing more than 100 dealers worldwide. As well as offering pedal modifications and rehousing services, JHS has built up a fairly extensive range of original products that include the specialised overdrive/boosters we are reviewing this month.

Both are built in regular-sized enclosures, finished in two shades of grey with screen printed logos and legending. Neither pedal accommodates a battery because voltages are bumped up internally to 18 volts from a regular centre negative nine-volt supply.

These days, there’s a vogue for overdrive pedals that are configured to sound like specific vintage amps. The SuperBolt is designed to simulate the tone and character of 1960s-era Supros, and features discreet components mounted neatly on a bespoke printed circuit board with open frame jacks and voltage trim pots for all the transistors.

The tone control is fairly true to the designs in many of these vintage amps, and is designed to produce usable tones throughout its range. A hi/low toggle switch provides two gain settings, which the manual likens to the high- and low-level inputs found on many amplifiers. 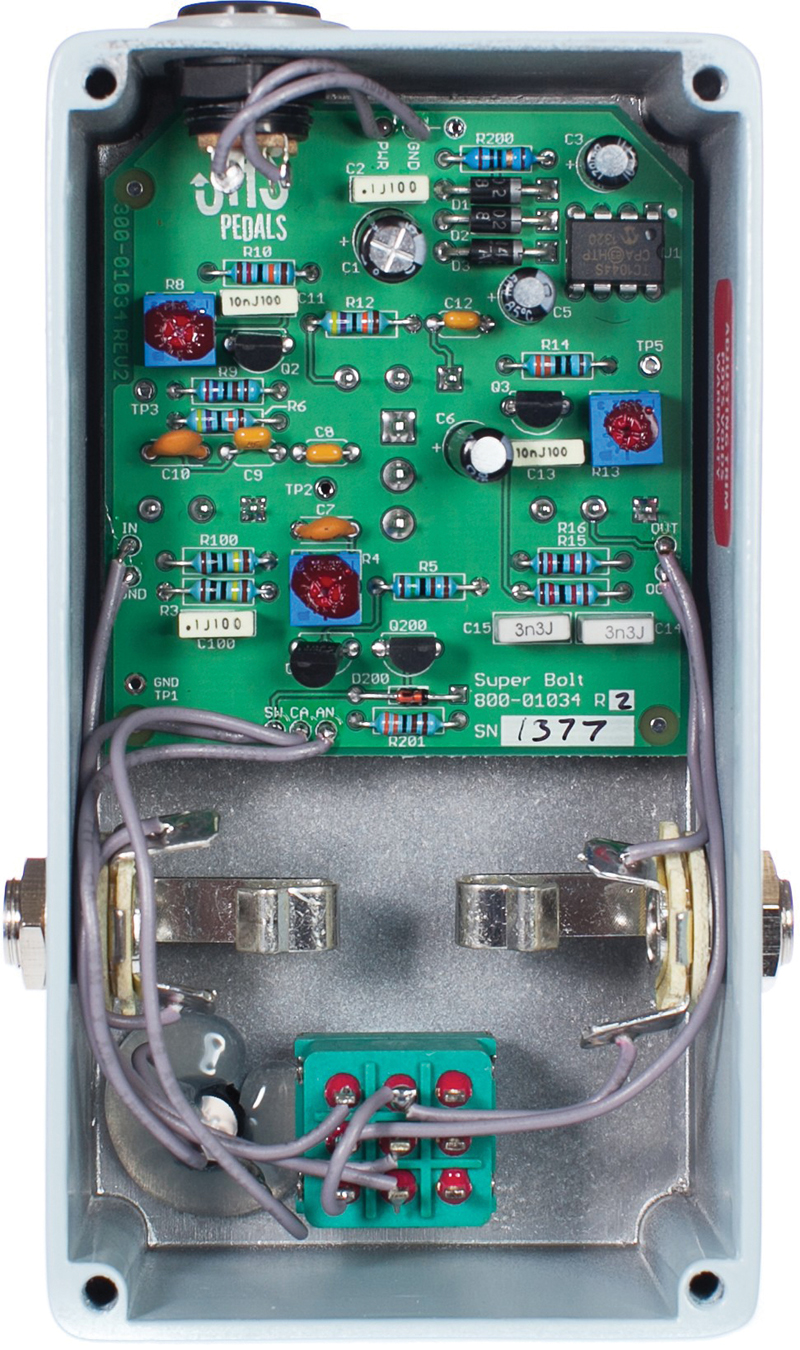 Before getting into the overdrive tones, it’s worth noting that the SuperBolt is an exceptionally transparent and natural-sounding boost pedal. For a neutral treble response, you need to roll the tone back to around 10 o’clock, and there is some slight bass roll-off that you can’t do anything about.

On the plus side, your guitar tone will be clearer. The low setting has a bit more midrange, while the hi setting is slightly brighter. The SuperBolt’s natural brightness becomes less apparent as drive is added and volume is reduced. In low mode, the overdrive comes through as a throaty bark in the mids, with ever-increasing amounts of compression.

At extreme levels, there’s a slightly ragged and aggressive Class AB quality to the breakup, juxtaposed with a surprisingly sweet, chiming treble. The SuperBolt remains touch sensitive throughout, and will clean up when you play lighter.

Equating hi mode to an amp’s high sensitivity input seems about right, and you get more of everything. In low mode, I might leave the SuperBolt activated as a tone shaper, but in hi mode it behaves more like a regular overdrive – albeit with a highly stylised sound.

At extreme drive levels, the SuperBolt does a convincingly fuzzy impersonation of a vintage mid-power valve amp on the verge of meltdown, yet that sweet and articulate treble remains. As for sounding like a Supro, we’d have to ask which model, because JHS isn’t exactly forthcoming on that one.

This time, the amp JHS has chosen to emulate is the Silvertone 1484 – as used by artists such as Beck, Death Cab For Cutie and Jack White. The Twin Twelve has discrete transistor stages that replace the 1484’s valves, with each stage adjusted for optimum voltage, and it’s built with surface mount components.

The controls include volume, drive, bass and treble. The equaliser is close to the 1484’s Baxandall circuit, but tweaked to maximise the useful range. Both bass and treble controls are active and provide boost and cut.

I should probably fess up and admit that I have never played through a 1484, or indeed any other Silvertone amp. They were cheap amps sold through catalogues in the US, so while they may be commonplace over there, relatively few crossed the Atlantic. My only recourse, therefore, was YouTube.

Online demos can’t give you any indication of playing dynamics, but they can be useful when you want to learn something about tonal characteristics and range of sounds. Without exception, all the 1484s sound raunchy and ballsy. The mids and upper bass are thick and rounded, but there’s plenty of upper-mid bite and pick definition, too. At higher gain levels, it veers towards fuzziness, and the overall vibe is discernibly vintage.

So, does the Twin Twelve nail the 1484 thing? Given that I can’t do an AB test, my answer would be an enthusiastic, although qualified, yes. Regardless of the drive setting, simply switching on the Twin Twelve ramps up the fun factor.

With humbuckers, some might find the woolly bass lacking a little in definition to cut through a dense mix, but it has an authentic grind that almost compels you to play garage-punk rhythm and blues-rock riffs.

Like a valve amp, it cleans up nicely from a guitar, but this feature works best with lower-output single coils. At low-to-medium drive settings, it also obliges you to work a little harder if you want sustain for soloing, but again this feels authentically amp-like. It also retains a sweet jangle with clear note separation, even at relatively high drive settings.

Both equaliser controls are very powerful and usable over their entire ranges. You can go from lo-fi clanginess, with the bass cut and the treble maxed out, to a soupy sixties fuzztone, with bumped-up bass and drive combined with heavy treble cut.

Although Supro amps are being made once again, their sonic character may be something you’d want to enjoy now and again rather than use as the basis of your tone. The SuperBolt may be an effective and cost-effective alternative, but it also holds its own as a boost/overdrive pedal.

The Twin Twelve is at its most effective when adding character and colour to clean-sounding amps, because it responds so well to volume adjustments and playing dynamics. You can match levels with the bypassed sound without losing any vibrancy or power, and it stacks very nicely with other boosts and overdrives, too. It’s the sort of pedal you may want to leave switched on all the time 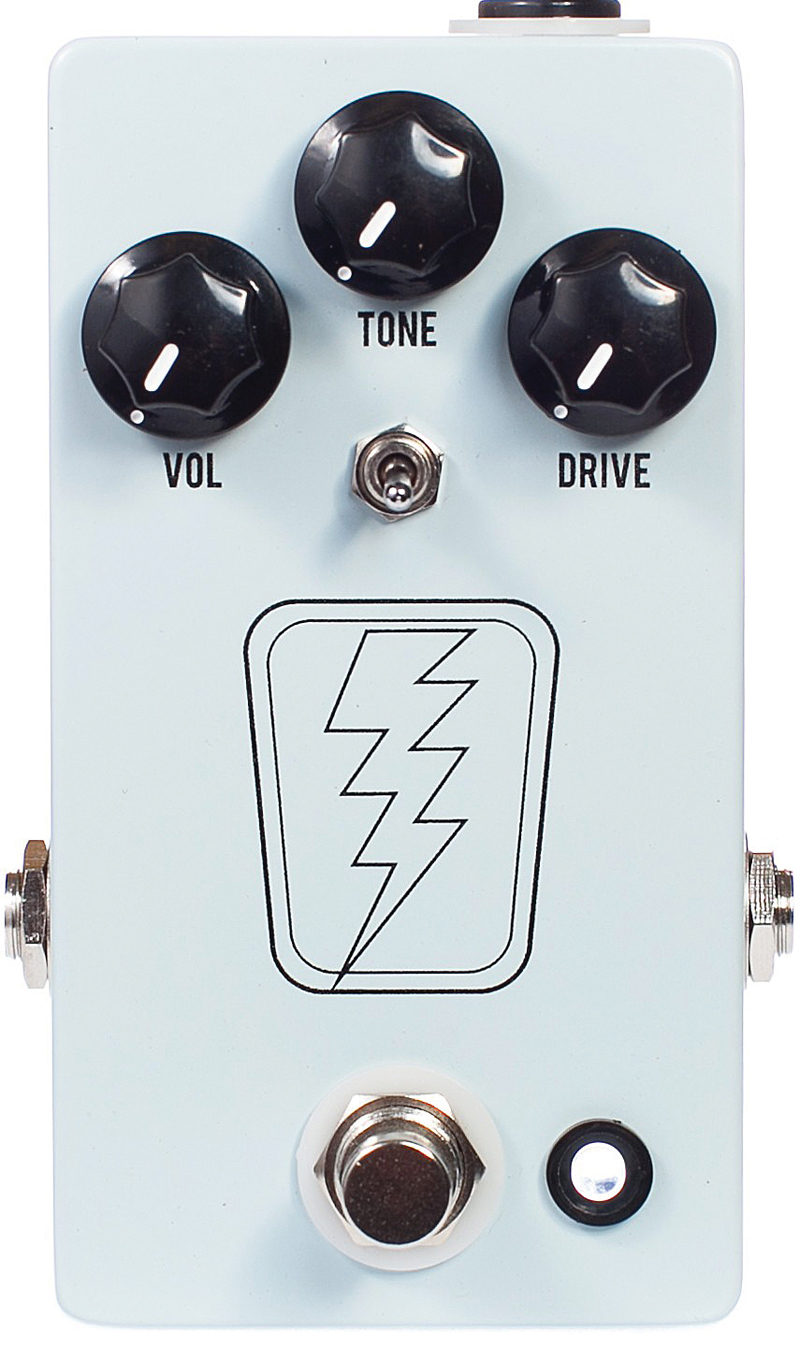 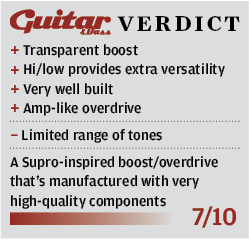 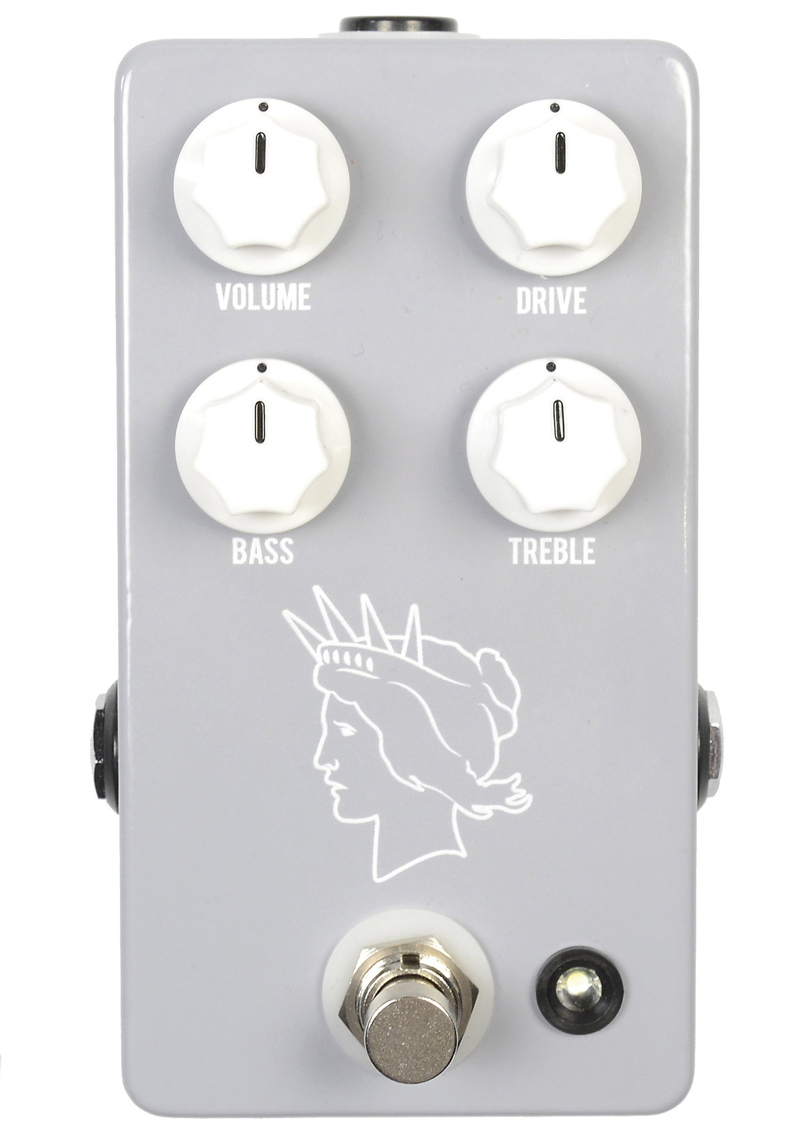 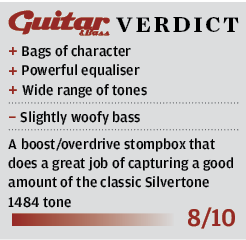