Capturing the sound of the world’s most famous studios in a stompbox is an ambitious task. Sam Atkins checks out the results… 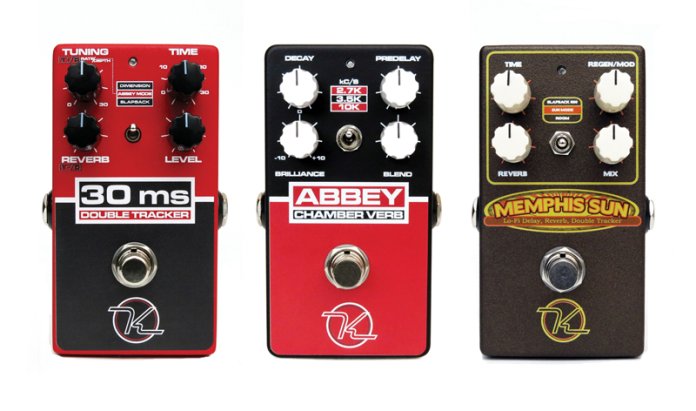 Abbey Road. The Beatles. Pink Floyd. Elvis Presley. Sun Studio. Johnny Cash. Double tracking. The Beach Boys. Smells Like Teen Spirit. Are you feeling suitably warm and giddy from what those words conjure up inside you? Good, because Keeley Electronics has three DSP-brained stompboxes at the ready to sate those desires.

The 30ms Double Tracker, Abbey Chamber Verb and Memphis Sun Lo-Fi Reverb pedals effectively capture the sound and feel of the world’s most famous studios and place them at our feet. To say they’ve sent ripples through the pedal world is an understatement, already shifting 1,000 30ms units since the pedal was announced at Summer NAMM in Nashville.

While the likes of Strymon and TC Electronic succeed at cramming numerous effects into a single enclosure, what Keeley is tapping into – and rather successfully here – is the fact that many players also enjoy single-pedal units that produce one or two perfectly realised tones. Having said that, 2016 holds some very exciting news, which Robert Keeley shares with G&B in the interview with the effects guru which you can check out here.

On amp duties for this review, G&B has enlisted the help of a Fender ’68 Princeton Custom and a Supro Thunderbolt, with a Custom Shop ’56 Fender Stratocaster and a Gibson Les Paul Standard, along with a Fender Rumble V3 500 and a Gibson SG Bass for those low-down sonic expeditions! 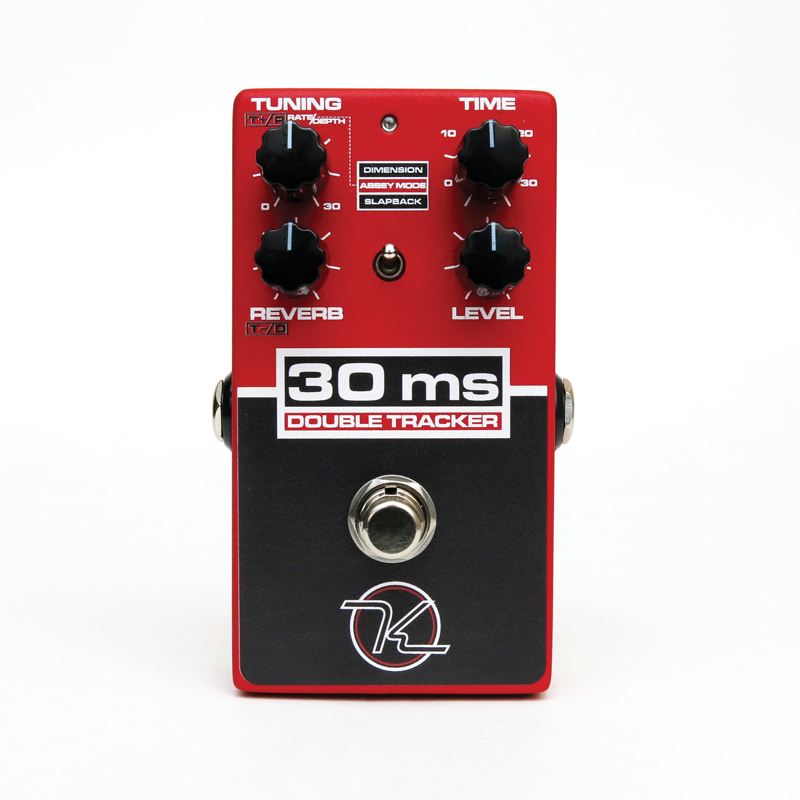 The 30ms, referring to 30 milliseconds of double-tracked effect, has been particularly popular with Keeley, which is valiantly trying to keep up with demand. Let’s start with what double tracking actually is. In the most simplistic form, it is the doubling up of your signal (guitar, bass, vocals or keys), creating a lush, wide and `doubled up’ sound as if two of you were playing in perfect unison, albeit with a very slight delay.

You have three switchable modes: Dimension, producing two voices that can be detuned and delayed by, you’ve guessed it, 30ms; Abbey mode, which reproduces the double-tracking effect from those famous studios in London, with added modulation simulating the manual effort of slowing a tape machine; and, finally, Slapback, which unlocks the delay time available from 30ms to 120ms with two doubled-up voices.

But that’s not all! Along with those modes is the added bonus of a Pro mode (with dip switches inside the pedal), which changes the control layout, dropping the reverb option in favour of complete control over the double-tracked sounds (using the tune knob to dial in whatever flat/sharp tones you desire). Let’s not forget that you can use a standard mono cable or a TRS cable, feeding the dry signal to one amp and the double-tracked signal to another.

We should also mention that Keeley has shoe-horned in a little of that Studio Two magic with a glorious Abbey Road-style reverb, too!

With all knobs at 12 o’clock and the Abbey mode selected, it’s difficult not to rip into a few Beatles licks and Pink Floyd numbers with a huge grin on your face. You’d perhaps be forgiven for thinking that this is a glorified chorus pedal, but the reality is it’s much more than that. It brings your rig and guitar sound to life without sounding artificial. Though subtle in its purest form,  what you have at your feet is the flavour of a legendary recording studio in a pedal enclosure.

For the gigging musician already enjoying a stereo rig, or the player experimenting with using two amps, a 30ms on your pedalboard is a seriously tempting addition. Hooking the Princeton and Supro up together, G&B used the internal dip switches to send the dry unaffected signal to the Supro for that tight controlled tone that the Thunderbolt does so well and the full wet double-tracked sound to the Princeton, which is pure aural ecstasy.

We’ve written a lot about the various functions on offer, which may seem complicated, but worry not, as to have this level of control and sound in a live rig straight out of the box is exactly what single-switch pedals should be all about. Should you wish to unlock Pandora’s Box you can, but you can also take the simple approach.

We cannot think of any genre of music the 30ms would fail to add something positive to. We also demoed the pedal with a Gibson SG Bass into an already huge-sounding Fender Rumble 500 and the 30ms delivered a noticeable treble lift,  enough to make us want to run two Rumbles!

Using a Keeley 1962 British-style overdrive pedal with the 30ms slightly detuned in Dimension mode and a dirty-sounding Princeton opens up a huge palette of easily recognisable classic rock and even metal tones (Metallic’s Enter Sandman sounding particularly tasty). And let’s not forget the Slapback mode for those crisp country-style runs up and down the neck. All in all, the 30ms is a versatile and joyful pedal to use, which players from all over the musical spectrum will get something from, and it puts a big silly grin on your face.

Refreshingly, the marketing blurb stands up to the weight of expectation, and we would have to agree that the 30ms is the ™ultimate double tracking experience∫ in stompbox form. 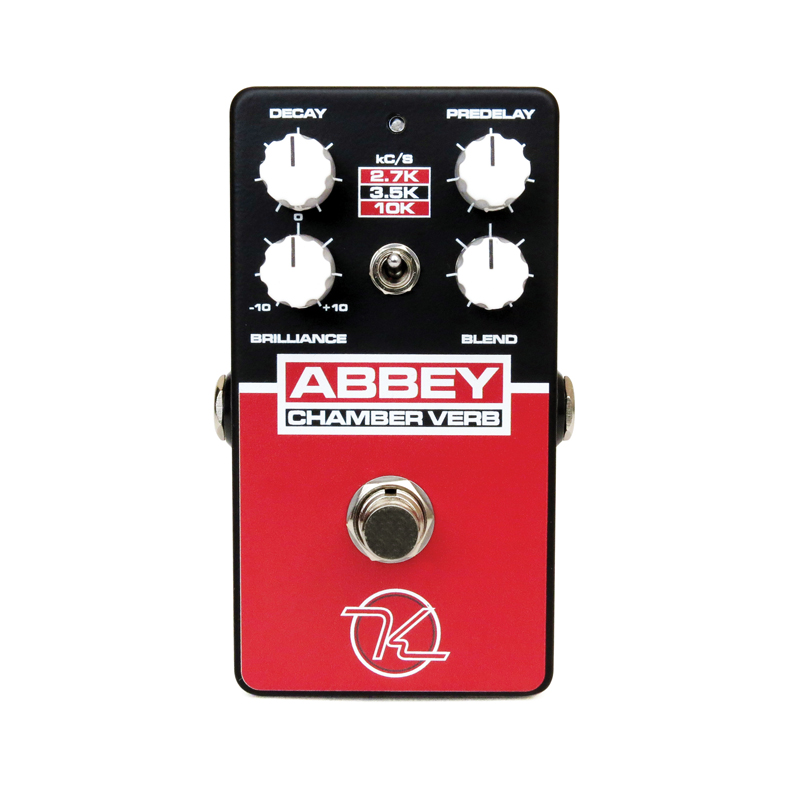 Staying with the Abbey Road theme, we have the Abbey Chamber Verb,  recreating the echo chambers found within those famous walls. An echo chamber is an isolated booth inside a recording studio designed to capture natural reverb sounds from a signal piped into it. It gets a little more complicated after that, as the men in white coats developed an array of electronic filters and switchable frequency levels (2.7 kHz, 3.5 kHz, or 10 kHz) all thankfully replicated here in pedal format (wearing a white coat whist using the Abbey Chamber Verb is optional).

The Chamber Verb is designed to deliver warm analogue-sounding reverb tones aplenty, so if you’re in the market for a reverb that creates incredibly long decays and space-like reverberations you should look elsewhere. Looking for a small room sound with a soft short reverb? No problem. Perhaps a large hall reverb sound that is bright and reflective? Yep, does that too.

The brilliance and pre-delay knobs on the Chamber Verb are where the magic happens. Those men in white coats again developed a way of refining what sort of naturally occurring reverb sounds were produced in the echo chambers at Abbey Road, and by using the brilliance option you can boost or cut the frequency response (+/-10dB) along with using the switchable 2.7kHz, 3.5kHz or 10kHz for added effect. The pre-delay has a range of 30ms to 150ms, so with little effort we were able to dial in some realistic echo chamber reverb sounds.

What impressed us the most was the pairing of the 30ms Double Tracker with the Abbey Chamber Verb.

These pedals are designed to appeal to players who want to achieve studio-like tones live without the need for complicated DAW software or an engineering degree with some carpentry skills thrown in. And let’s not discount the aesthetics either, as these pedals look the business, too ± and who doesn’t like good looking pedals on their boards? 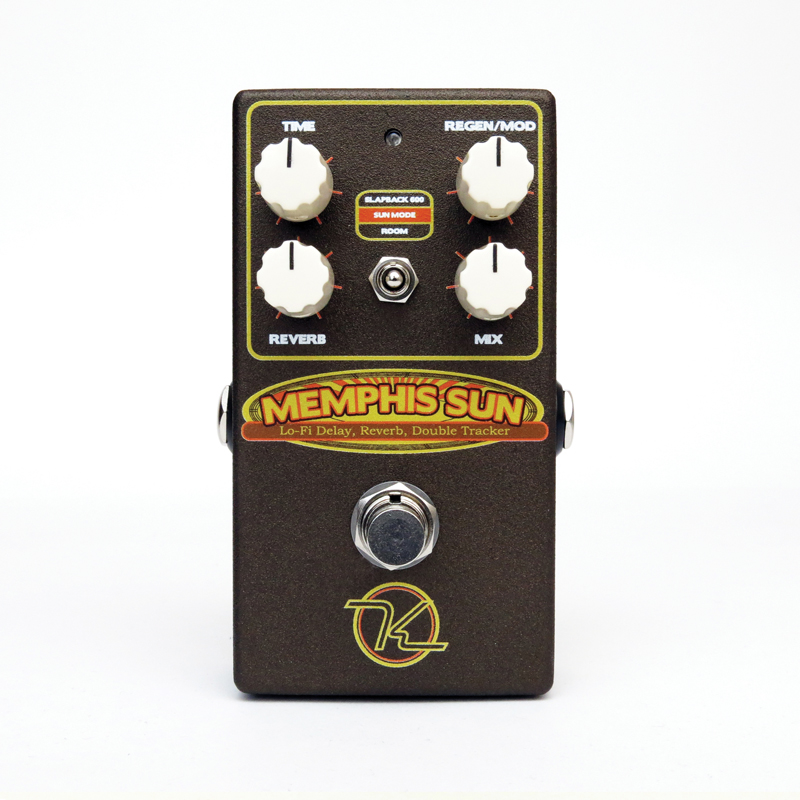 The Memphis Sun Reverb continues with the studio-in-a box theme, but this time has both feet planted firmly in the 1950s. The legendary Sun Studio in Memphis, Tennessee is a small unassuming building but has played host to some of the biggest names in the industry. Elvis Presley recording That’s All Right, Jerry Lee’s Great Balls Of Fire, and let’s not forget Johnny Cash singing about walking the line. All within the walls of Sun Studio, which proudly and confidently terms itself `The birthplace of rock and roll’.

So, then, what exactly is the Sun Studio sound represented here in pedal form? What you’re getting is a unique small room reverb pedal (simulating the hallowed 33x18ft asbestos-tiled room) with added slapback, along with ADT (auto double tracking). But this isn’t a one-trick pony pedal, as like the 30ms Double Tracker and Abbey Chamber Verb there’s a lot happening under the hood.

Similar to the 30ms Double Tracker, the Memphis Sun has three switchable modes available: Echo 600 offering a lo-fi echo with a small room reverb effect, Sun mode with double tracking, modulated slapback echo with the small room reverb and, finally, the Room setting, which offers up the same reverb effect but with pre-delay and variable filtering.

What’s instantly recognisable when playing is that the reverb is subtly compressed, which successfully emulates what happens to loud sounds in a small space. It’s that level of detail that makes playing with the Memphis Sun so much fun.

Most players, like us, will go straight to the Sun mode and attempt our best early rock ‘n’ roll licks, and perhaps even a bit of chicken pickin’ to really immerse ourselves in the 1950s sound. Keeley has added ADT to the Sun mode, which wasn’t around in those days but certainly doesn’t detract; in fact, it adds a lovely warm-sounding double-track effect and another vintage-sounding flavour to the pedal’s arsenal. In this mode, adjusting the delay time between 30-180ms, we are firmly in slapback territory, and using the regen/mod knob to dial in some modulated `tape’ screams Carl Perkins and Junior Parker.

Echo 600 is the mode that puts an even bigger grin on our faces. With a delay time from 30ms to 666ms (a nod to the devil’s music, naturally) that is filtered, compressed and filtered again creates the illusion that you are playing in a small studio space. All this filtering makes the signal almost tape saturated with an edge of subtle distortion, which would make contemporary retro stylists such as Dan Auerbach and Jack White feel very much at home.

Emulating the sound of legendary studios and cramming studio-like effects into a standard pedal enclosure is an interesting and brave concept, but Keeley Electronics has delivered the goods. These are high-quality gig-ready pedals that would happily remain on pedalboards (for guitar, bass, keyboards and even vocals) for years to come. 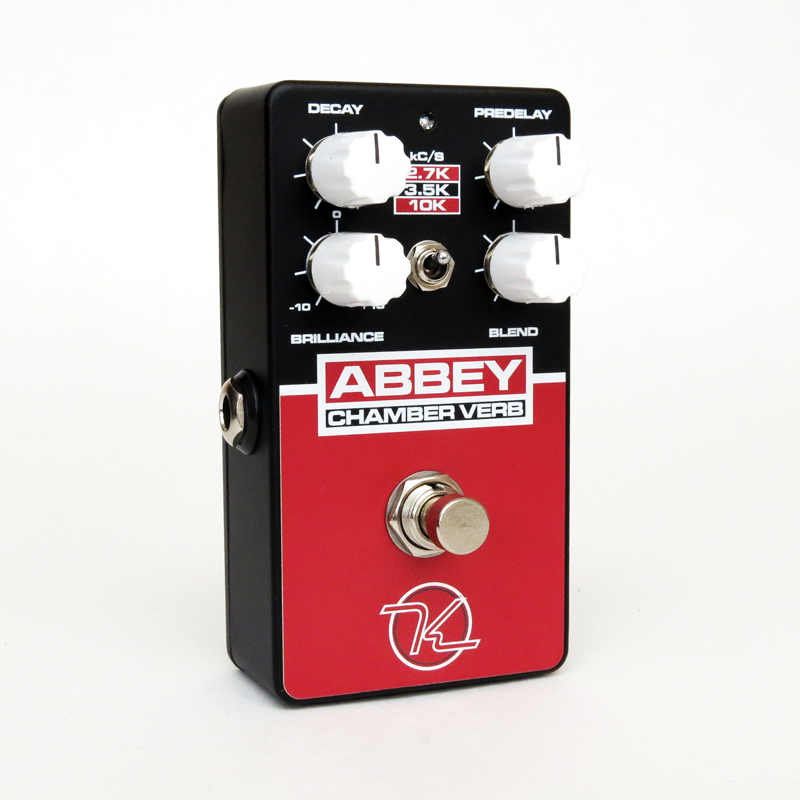 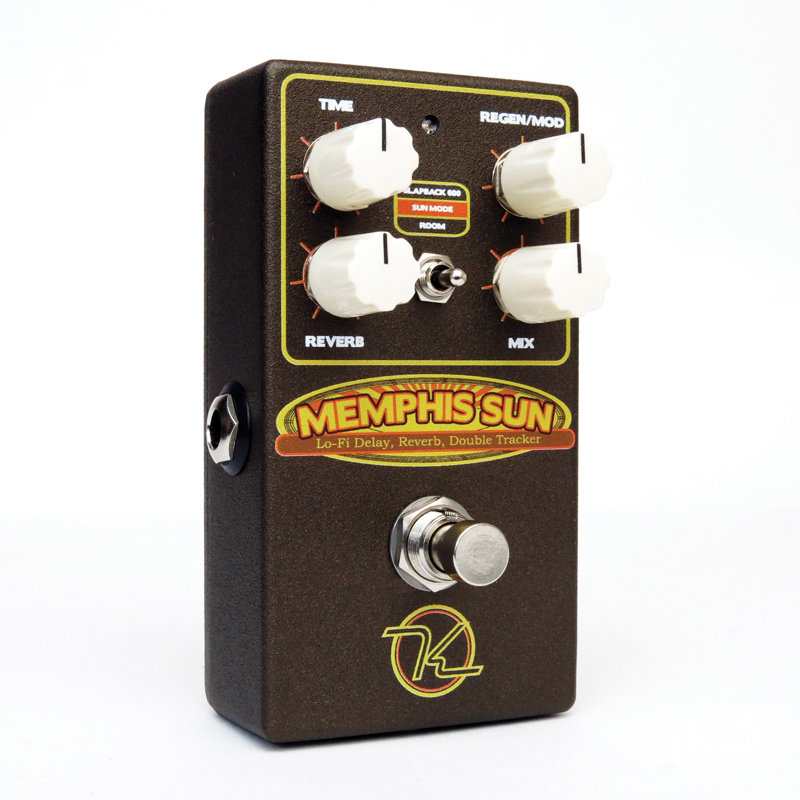