Lakewood started out making bespoke instruments, and a guitar like this all-koa M56 Custom shows just what a fine job they can do with a special customer order. 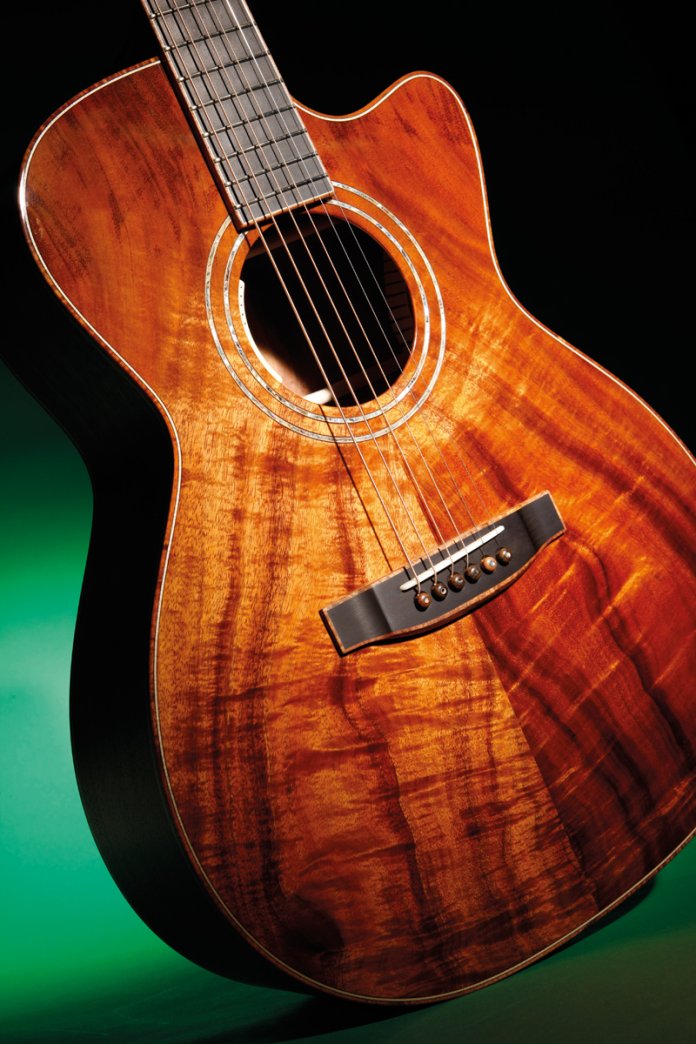 Lakewood may be a fairly mainstream guitar brand these days, but a visit to the company website will reveal how streamlined the process for ordering a custom Lakewood has become, as there’s a ‘virtual designer tool’ which allows you to choose the exact specifications for each and every component of your guitar from an extensive drop-down menu. It’s an exhaustive list that encompasses tone woods, neck profile, nut width, inlays, binding and purfling, tuners and far more besides. 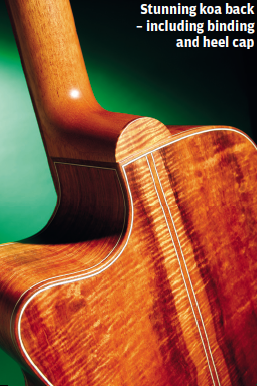 You could easily while away a few evenings designing your dream guitar. Some features come as standard while others are subject to an upcharge, but the designer tool keeps a running cost total for you, so it’s easy to stick within budget. Once you have made a decision on all your specs, you simply print off a PDF document and send it to your dealer to begin the ordering process. Waiting times vary, but can be less than three months.
Koa wood is the overriding theme of this Grand Concert-shaped cutaway model, and we’d be hard pressed to say whether the front or back is the more spectacular. The back and sides have an open pore satin finish, with gloss preferred for the front. 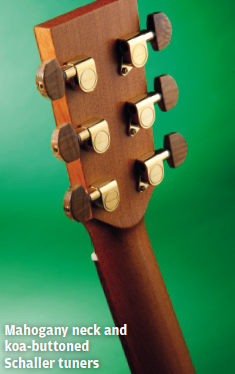 Every available edge has been bound with koa – including the ebony bridge, which is a very unusual touch. There’s also wood purfling and two slim bands of abalone for the rosette, and even the buttons of the gold Schaller tuners are koa. The one-piece mahogany neck inevitably pales in comparison, but the peghead has a lovely ebony overlay to complement the un-marked fingerboard.

Lakewood offers two pickup options, the LR Baggs Element and the Anthem; this M56 was supplied with the Anthem system – an Element undersaddle piezo pickup plus a Tru-Mic condenser mic mounted 3mm off the bridge plate. A control panel just inside the soundhole provides Blend and Volume controls along with a phase switch and battery indicator.

Sound
Although all-koa acoustics are rare, I have had the opportunity to review such instruments in the past. One in particular, a Collings Concert 0002HKK, was unforgettable. Although the Collings is a hard act to follow, I started this Lakewood M56 Custom review with high hopes and I wasn’t disappointed.

When a guitar differs so significantly from the usual formula, it has to be assessed on its own terms. There’s not much point in wondering why it doesn’t sound like a similarly-proportioned spruce or cedar-topped instrument. We can only describe the tone to the best of our abilities so you can figure out whether it would suit your playing needs and taste.

All-mahogany guitars have seen a recent upturn in popularity. Besides the colour, the only common feature between all-mahogany and all-koa guitars is reduced volume and punch compared to spruce-topped guitars. Where the mahogany will typically give a dry and woody tone with prominent mids and a rolled-off high frequency response, the M56 has a gorgeously sweet sparkle and shimmer that is totally devoid of brashness. There’s a refined quality with even string-to-string balance and a low end that’s solid but not too dominant.
One listener suggested it would record very easily because it almost sounds like studio quality compression and equalisation has already been applied to rectify boominess, bring up the midrange detail and add some treble gloss.

The M56 sounds drier and less lively than equivalent guitars with rosewood back and sides, but it’s more harmonically complex than a typical all-mahogany instrument and also far more ‘sophisticated’ than our 000 sized mahogany/spruce reference guitar.

When you first spend time with an unfamiliar but inspiring acoustic, the tone and playing feel of the guitar itself will often steer you towards the style of playing that suits it best. Although fun to strum, the M56’s charms really emerged through fingerpicking.

For palm-muted styles, the M56 produces a nice degree of thump and the harmonic overtones provide intriguing sonics without obscuring close note clusters. It’s excellent for bluesy and ragtime as well as Celtic stylings with drones, dropped tunings and mash-ups of open strings and fretted notes. Some heavier strings may help to bolster the bass in dropped D and C tunings, and we’d be inclined to experiment because this guitar is great for laid-back slide playing.

Since the pickup system is an optional extra, customers can opt for either of the LR Baggs systems Lakewood offers or have their preferred system fitted post-purchase. So we won’t dwell on that aspect beyond stating that the combination of the Tru-Mic and Element undersaddle pickup certainly does the M56 justice. The tone is natural, realistic and feedback resistant, but a bit of treble attenuation may be required through some amps or PA systems. 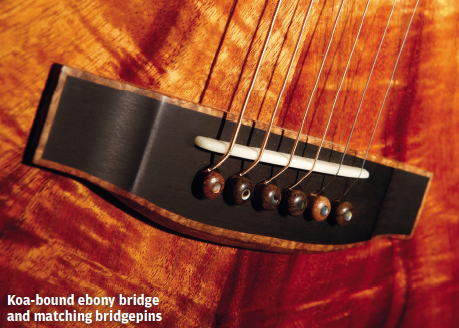 Verdict
Generally speaking this Lakewood’s build quality is top-drawer, but those inclined to search out such things may notice two small imperfections. For instance, the top of the bone nut is polished to a high gloss, but the back is left rough, with visible file marks. Viewed front on, the gloss top looks fantastic, but from a player’s perspective it’s obvious how the finish sinks into the grain. This is a consequence of Lakewood’s policy of keeping the finish as thin as possible to optimise tone, which is fair enough. Obviously these are minor details that have no bearing on playability or tone, and the M56 Custom is an unusually beautiful instrument in every respect, and we’re reluctant to send it back. 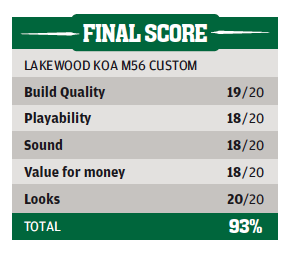