After relocating to Arizona, Israeli luthier Gil Yaron set about a rethink of one of guitar history’s most iconic designs. We inspect the Bolt S… 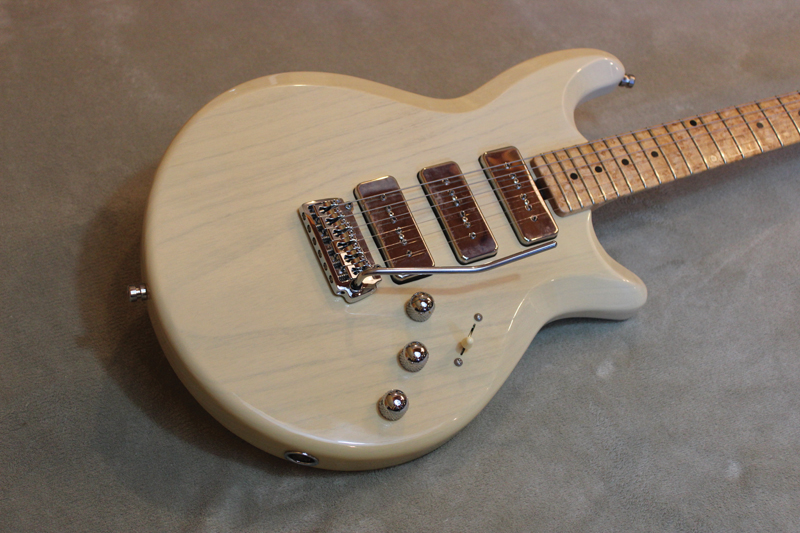 A guitar maker of legend in the minds of many fans of vintage Les Pauls, Gil Yaron is perhaps best known as the Israeli luthier behind some of the world’s most sublime reproduction ’59 ’bursts, although he has also built hugely respectable 50s bolt-neck recreations. While contemplating moving his business and family to the United States two years ago, Yaron figured it would behove him to design some original models.

I had an opportunity to play the first of these, his Bone guitar – an elegantly original take on the set-neck, single-cut solidbody – and was massively impressed. The Bone uses the archetypal wood combination of old-growth mahogany back and neck and carved eastern maple top, but Yaron routes the mahogany body to a shell that is filled with a precisely matched core lightweight paulownia before gluing down the top.

The result is a genuinely solid-bodied guitar that nevertheless weighs a mere 6.1lbs. Add a hand-rubbed shellac finish, Brazilian rosewood fingerboard and Yaron’s own patented Air Gap II humbuckers and the Bone is a tasty and highly expressive instrument.

Now, a few months after having settled into his new premises in Arizona, Yaron is submitting his second original design for consideration. A rethink of “the other great American electric guitar”, the Bolt S is Yaron’s take on the double-cutaway bolt-neck with vibrato bridge.

Exquisitely crafted and creatively redrawn, it’s an ergonomic rethink of the world’s most emulated electric guitar, and another impressive achievement in the process.

As many followers of guitar forums will know, Gil Yaron has been generous about sharing his build process across the development of several guitars, and the prototyping of the Bolt S was no different. In a long thread in April 2014 (a search should still find it), Yaron laid bare his construction of the first example of this model, and the painstaking process reveals a blend of artisan and technician. 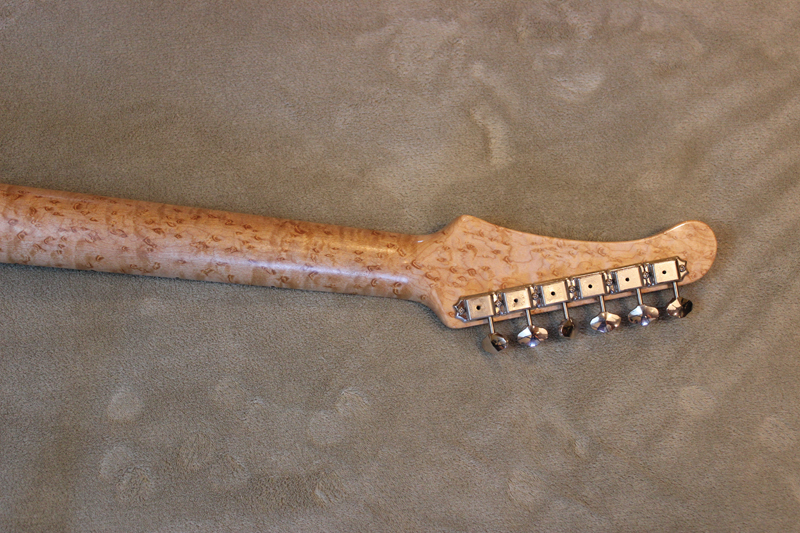 The results show a nuanced consideration of how a 25.5-inch scale bolt-neck should feel in the hand, sit on the lap, hang on the strap and resonate harmoniously – both unplugged and amped. And while the final product is flexible regarding pickup complements and some other details, it remains ultimately a homage to the spirit of the classic Strat.

This Bolt S has a lightweight swamp ash body carved in a shape that’s mildly reminiscent of the Ernie Ball/Music Man Silhouette, although its lines and beveled edges follow original proportions in its asymmetrical double-cutaway design (you might also call it ‘Strat meets SG’).

The wood displays the kind of grain you’d expect in a cherished early-50s black-guard Tele, bold beneath a thin blonde finish in Yaron’s proprietary blend of shellac and nitrocellulose lacquer. The neck is a superbly figured length of birdseye maple, with a maple “cap” fingerboard that allows for the installation of Yaron’s proprietary truss-rod design without the need for a skunk stripe at the back.

Adjustment is achieved via a wheel within a slot at the body end, leaving more wood at the neck-to-headstock region for a stronger joint and improved resonance beneath the nut, while still achieving a neck that’s easily tweaked without removing it – or a pickup – from the body.

The neck is available in different profiles by request, but I can’t imagine many players taking issue with this one: a full, yet rounded C with a hint of soft V at its apex. With low shoulders that fall away gently, it sits beautifully in the hand and plays exquisitely all up and down the 22 well-dressed medium frets. 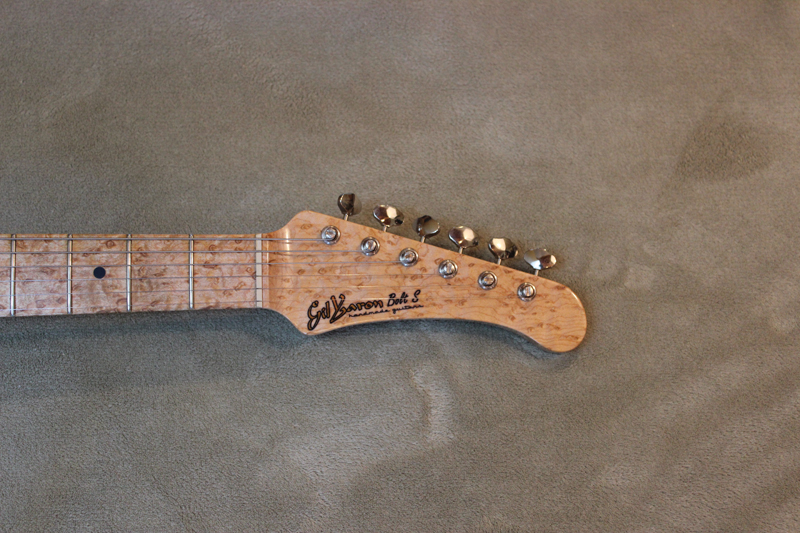 Gil Yaron has long wound his own pickups – PAFs and P-90s for his LPs, Tele and Strat-style single coils for his bolt-necks – and the new creations for his original guitars are an enormous part of the formula. The three Air Gap II P-90s in this Bolt S employ his patented technology in single-coil designs that situate the eponymous “air gap” between the six individually adjustable magnets on the pickup’s underside and the steel pole pieces above. 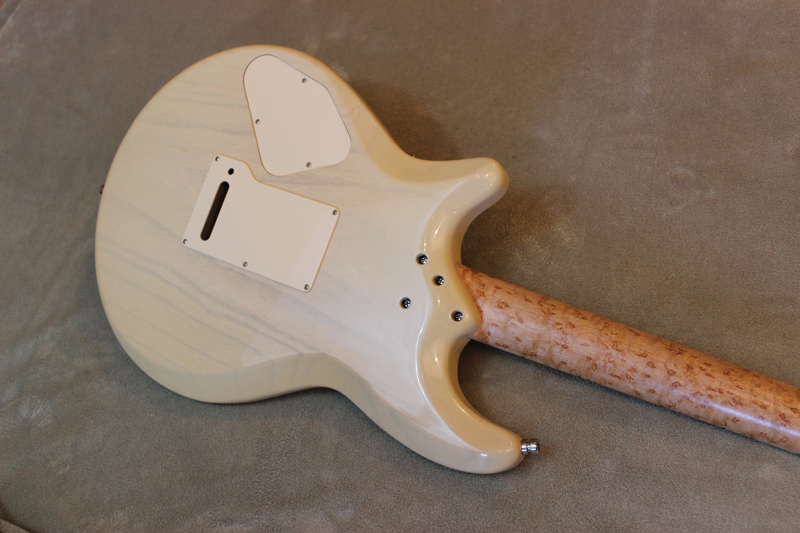 Adjustment of the relationship between magnet and pole piece allows for precision tuning of the pickup’s output and treble and bass response for each string, resulting in an incredibly clear and balanced amplified tone, without placing any magnetic drag on the strings themselves. This set reads 8.83k, 8.06k and 7.01k ohms from bridge to neck respectively, which would indicate a good, balanced trio for standard P-90s – although these pickups are nothing like standard P-90s.

They are wired through a semi-traditional complement of master volume, an individual tone for the bridge pickup, with a shared tone for the neck and middle, and five-way switch.

I played the Bolt S through a custom-built JTM45-style head, 2×12 cab and a Matchless SC-30 combo with overdrive and fuzz pedals, and found that Yaron’s design objectives rang true through both amps at a range of settings and pedal insertions. On top of which, this is a superbly effortless guitar to play. 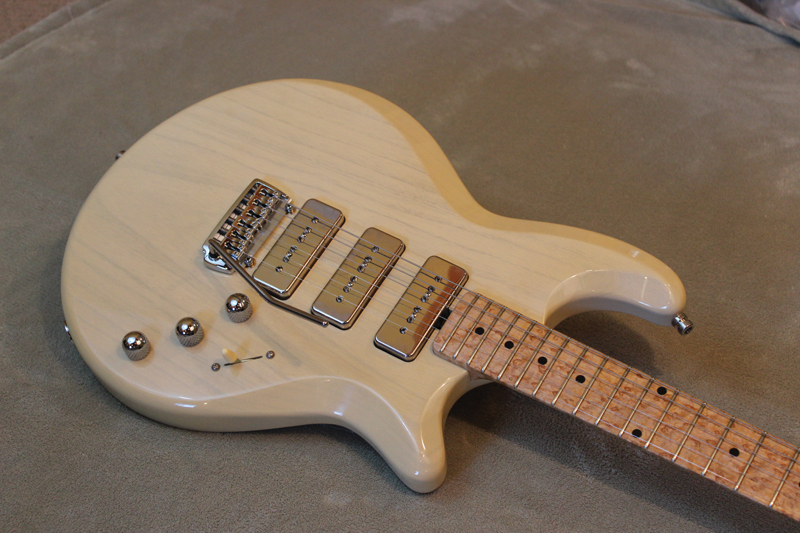 Rather than repackaging vintage S-style tones (Yaron’s had those covered for years), the Bolt S reinterprets the essential ingredients – three pickups, vibrato, trad woods and 25.5” scale length – into a modern instrument with a more open voice.

These pickups look like P-90s, but they sound very little like them, other than attaining just a whiff of gritty-edged hair at the front of the attack. Instead, they are extremely clear and articulate, yet full sounding, and surprisingly quiet for wide-coiled single coils (plus, the in-between positions are noise cancelling).

The Bolt S sounds snappy, funky and round at clean amp settings, excelling at the poppier side of country or, with just a little more amp gain, stinging retro Chicago blues. With either amp cranked into crunch or, for example, a Gas FX Drive Thru overdrive, these pickups’ clarity via the swamp ash and maple’s punchy and slightly scooped voice lends bite and power to lead tones, and an extremely crisp snarl to powerchords.

This is a beautifully constructed bolt-neck that touches several Strat-inspired references, but more fully lends its own voice and character to your playing.