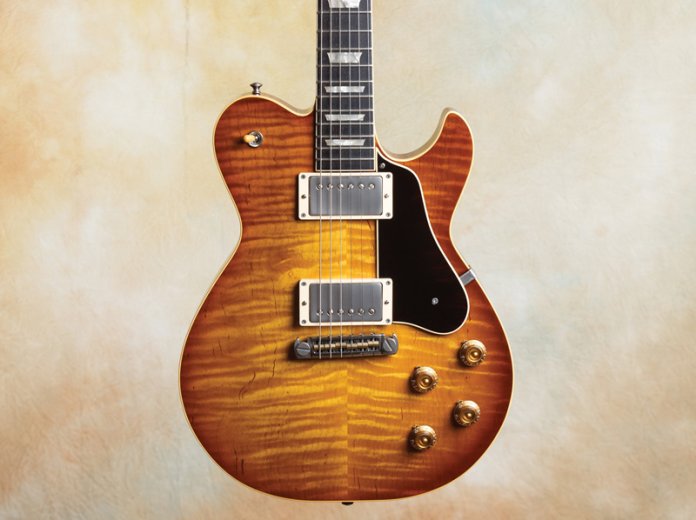 I first encountered Johan Gustavsson’s Bluesmaster Custom 59 in the ether, via word of mouth and fevered forum discussion. What was this gorgeous beast that melded classic designs, cost nearly twice as much as a Gibson Custom Les Paul reissue, and promised the closest thing available to circa ’59 Burst tones?

Some years later, I finally got my hands on one, and perhaps the most surprising aspect of the experience was how immediately I determined that owning such a guitar would be worth every penny of the steep asking price. Word often has it that Gustavsson is able to capture ‘old-wood tone’ and ‘vintage-guitar feel’ in his new creations. Spoiler alert: somehow or other, he really does, and it’s a wonderful thing. 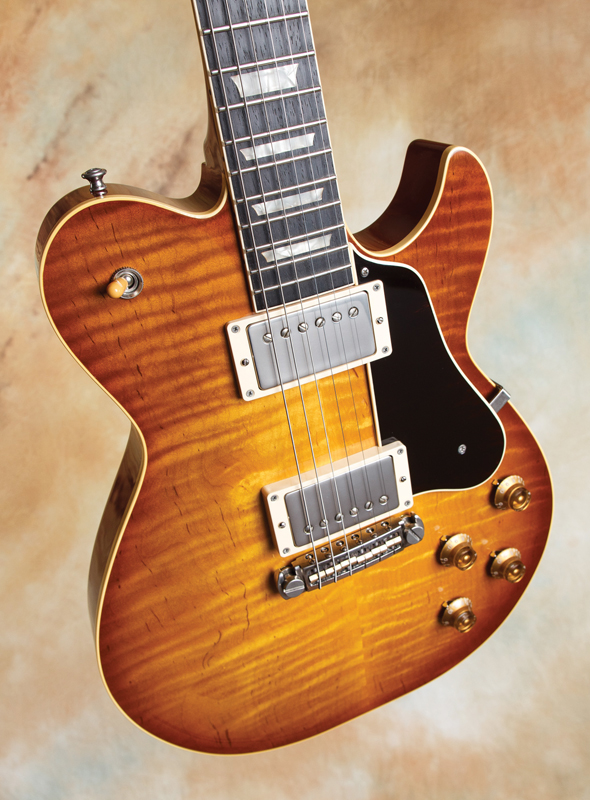 Now, this guitar presents something of an anomaly in my monthly Letters column, seeing as it’s not made in the United States. It is, however, more readily available Stateside than just about anywhere else, and there are two official US dealers I know of. Otherwise, most sales go directly through the maker.

Johan Gustavsson is based in Limhamn, Sweden, and learned woodworking by crafting custom furniture. A guitarist himself, he was inevitably drawn to luthiery and has been building fine instruments for 30 years. He began formulating the design for what would become the Bluesmaster back in 1993, and finally released his flagship model in 2001.

An elegant marriage of what he calls his “two favourite solidbodies” – the Les Paul and the Telecaster – the instrument clearly owes far, far more to the former, although the familiar reverse-S curve of the Fullerton-inspired upper bout and other subtle details form a constant reminder that we’re a long way from any Les Paul clone or copy. The guitar I acquired for testing remains true to the original formula, although we can assume that Johan has refined his craft over the years. 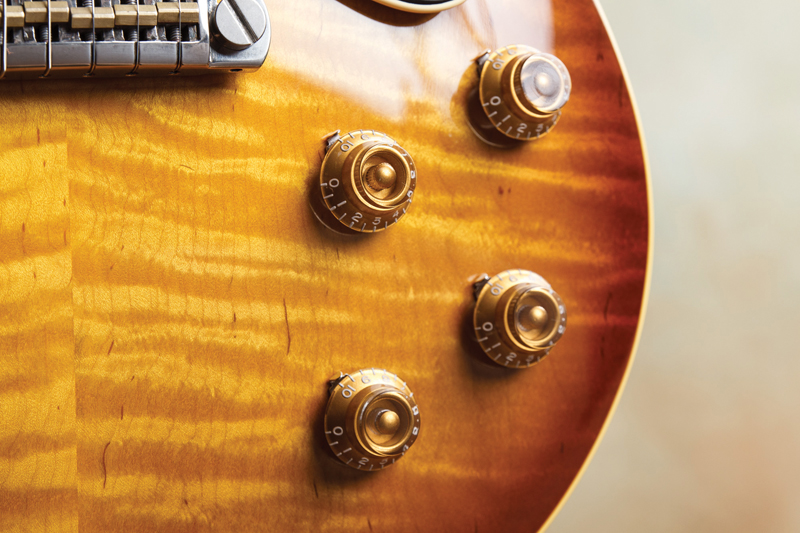 But enough of the esoteric rambling; why on earth is this guitar so feted? How can it be this good? Both are difficult to answer in simple terms. And yet, while I’m against prescribing any ephemeral magic to an instrument crafted by human hands from readily available organic materials, we are looking at the work of a builder who is adept at capturing his refined aims in wood, wire and metal.

Other than the few instruments that occasionally land at his two US dealers – CR Guitars and Destroy All Guitars – Gustavsson’s creations are essentially custom-built, so some specs will vary, but the Bluesmaster Custom 59 as a standard model does have many consistent features. Johan goes to some lengths to select and acquire the woods, and the obvious quality of the one-piece mahogany back (solid, in this case, but chambering is available) and flamed eastern maple top attest to the effort. 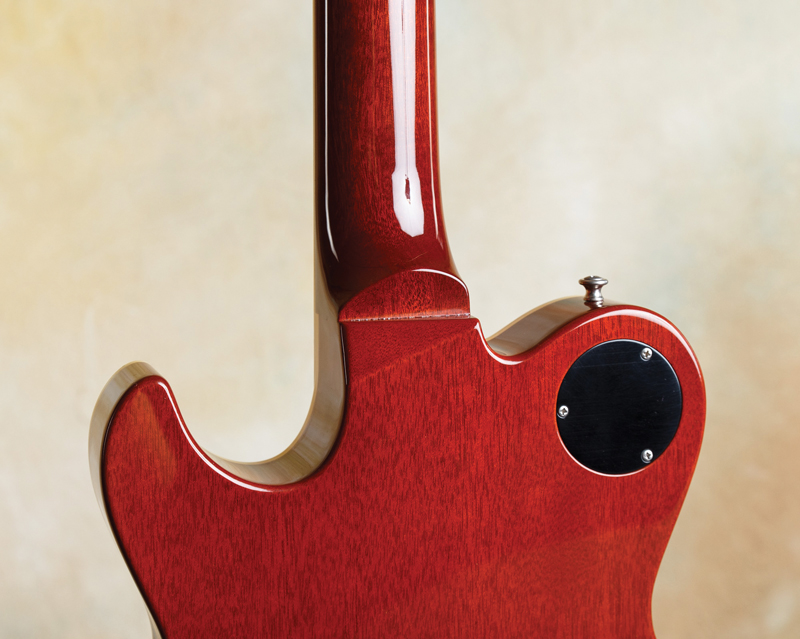 The former has a tightly flecked grain beneath the trans-cherry back and neck finish, while the latter displays a subtly elegant, non-bookmatched flame that appears realistic circa ’59, with the kinds of characterful mineral streaks and irregularities that Burst aficionados often enjoy, beneath an artfully faded Cherry Sunburst finish.

Although straight-on photos don’t reveal it well, there’s a sultry feel to the Bluesmaster’s top carve, too –curves that reveal a mastery of the arching process that is strangely difficult for some builders to achieve, but which looks just right here. We’re already getting to a big part of that ‘old-wood feel’; put the right ingredients together, and render them with old-world artistry, and you’re a long way toward creating a ‘new vintage’ experience. 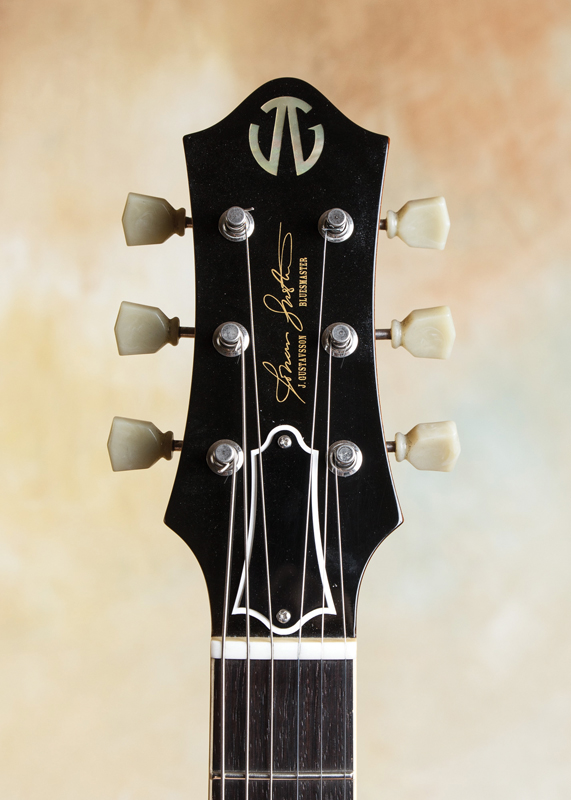 The other big part of this ‘vintage feel’ equation is the neck profile, and this one feels superb. The rounded ’59 shape is perhaps the most popular profile these days, yet it’s puzzling how many makers stumble at that hurdle.

The study of many original late 50s Les Pauls in the course of his training clearly helped Gustavsson to get this one just right, and it’s a full C shape that fits the curve of the palm beautifully, extending into comfortably soft shoulders and a rolled binding at the fingerboard edge that inspires you to wrap the hand around that sucker and play.

All the little details are acquitted in a manner that inspires the utmost confidence: the binding and other plastics have that just-right look, as do the acrylic trapezoid inlays, and the headstock shape and logos on a glossy holly veneer exude class – one of the variations from the iconic Gibson headstock that I don’t find wrong. The headstock’s 17-degree back angle also hits right at vintage-LP specs, as does the ’59-style extended neck tenon. 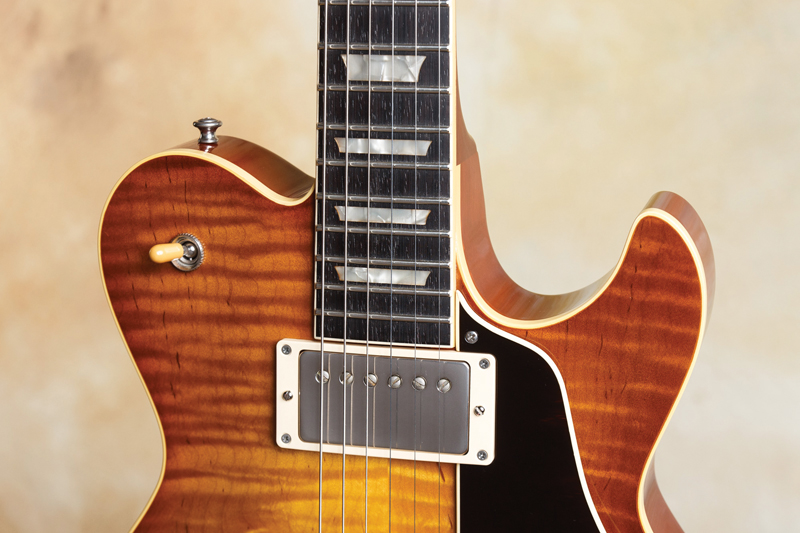 Alongside nuances in the body shape, the Bluesmaster’s bridge is another noteworthy departure from the classic LP, but let’s assume Gustavsson is trying to tell us that this is the way Gibson should have done it in the first place.

This bridge works superbly and, if the guitar’s sonic performance is any indication of the veracity of this piece of hardware, it’s doing something stellar for tone and sustain, too. The ThroBak SLE 101 MXV Ltd humbuckers are among the most respected PAF-style pickups being made today, and Gustavsson adds individual push-pull coil splitting to the tone controls to up the versatility.

I played the Bluesmaster Custom 59 through a Komet 60 and a custom-made JTM45-style creation, and was wowed at every turn. Aficionados often declare that “nothing but a Les Paul sounds like a Les Paul”, and that’s usually true, but for many applications this guitar probably sounds better, and has a broader range, too.

There’s little you’d want to do with a genuine (even vintage) Les Paul that this Gustavsson couldn’t tackle with aplomb – from thick, creamy, vocal blues tones in the neck position to snarly, raw rock ’n’ roll in the bridge, all with the kind of sonic depth, nuance and hotwired touch sensitivity that few LPs can muster.

With the Komet cranked, it drips with textured harmonics and rich depth; cleaned up, it’s still remarkably multi-dimensional. It’s a guitar that feels long-played-in right out of the case, inspiring you to keep going. Play one if you get a chance.