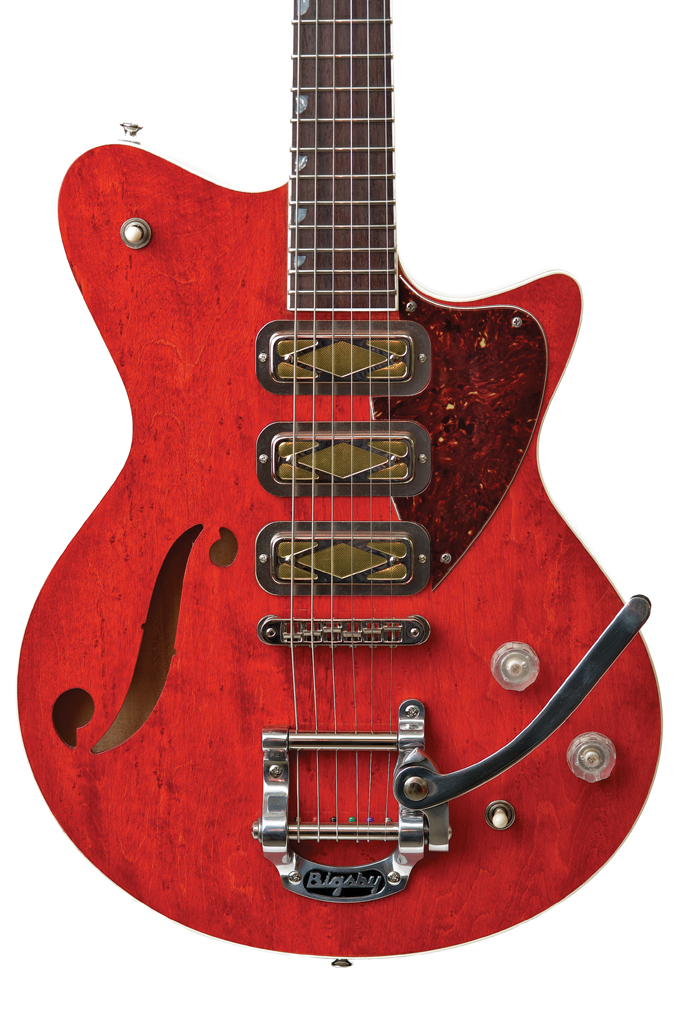 I first encountered Saul Koll’s guitars several years ago on a personal quest of sorts: a bit tired of the same-old same-old, I was searching for a guitar that would both look and sound different from the norm.

I found it in the form of a Koll Duo Glide. So, having acknowledged that bias, I will proceed without trying to conceal the fact that I’m a fan of this maker’s work. I enjoy his sense of style, I enjoy the tones that so many of his guitars achieve and I enjoy the fact that virtually every Koll you pick up will be different… but different with a purpose. All that and he’s a downright nice guy, too.

Prior to his licensing agreement with Premier Builders Guild – which was recently dissolved – Koll’s guitars were rarely sighted in the UK. Nor frequently the US, for that matter. They were made one at a time by the man himself in his workshop in Portland, Oregon, by custom order, but largely to a series of standard model templates – some of which he had been producing for over 25 years. 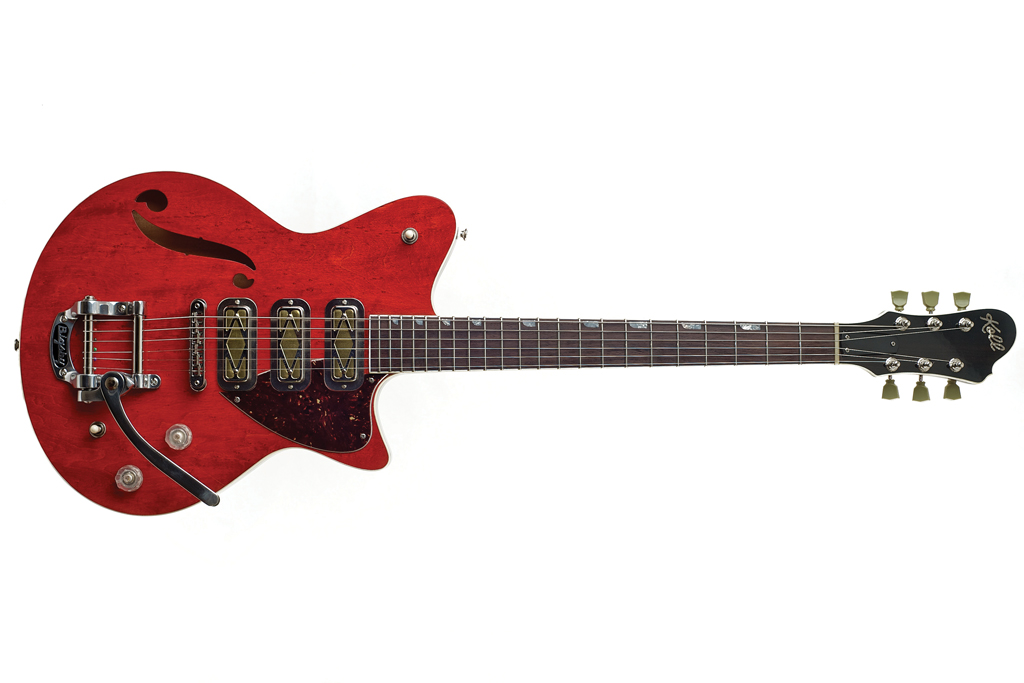 Now, after five years of the PBG relationship that made licensed Koll models far more accessible worldwide, Saul has decided it’s in his best interests to bring manufacturing back to Portland, and to take on additional staff to help build and market instruments to dealers and players. To that end, Koll guitars will once again be truly the creations of Saul Koll – with a little help from his friends. The team hopes to produce around 100 guitars in this coming year, plus a number of custom-order instruments.

Following the former on-spec ethos, this Duo Glide was made for the 2016 NAMM Show in Anaheim, California. The Duo Glide is Koll’s cornerstone model, but can be a whimsical muse, bending to many guises. 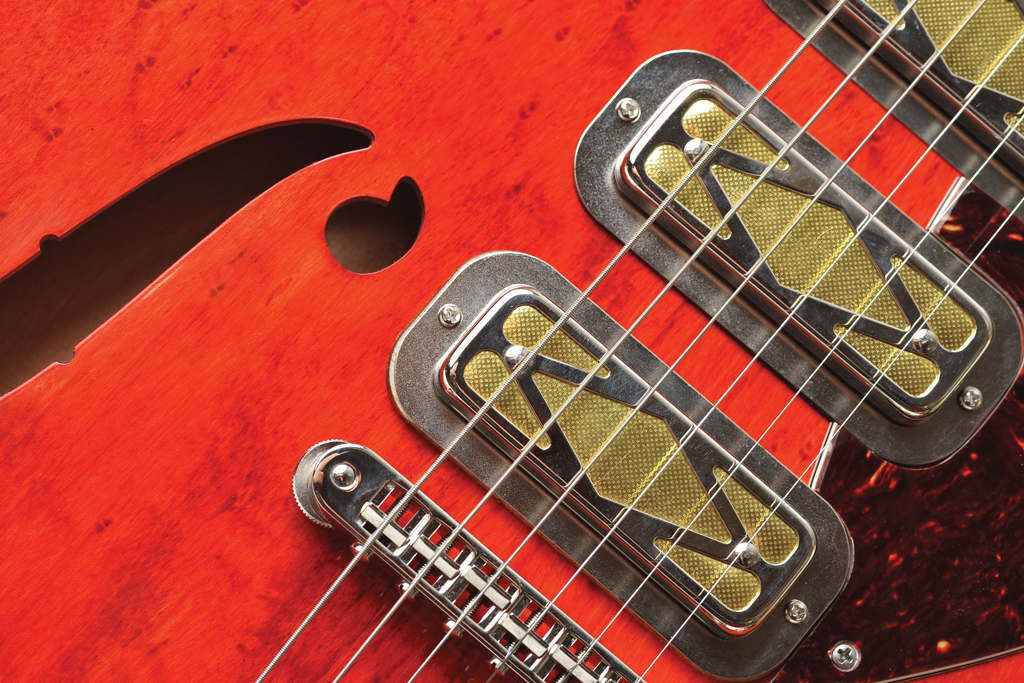 It will ably stand in for a Les Paul with figured maple top and humbuckers; go all Gretschified with TV Jones Classics, humpback or thumbnail markers and a Bigsby; or, as in this case, take on a 60s catalogue ethos with three DeArmond-style repro gold foil pickups and a stunning Silvertone Red finish.

The specs on this one take it way above and beyond anything Kay, Harmony or Silvertone ever delivered, of course. The body is made from chambered mahogany, capped with a flat maple top that exhibits interesting figuring, with some subtle birdseye apparent.

It’s a Gretsch/Gibson-scale guitar at 24.625 inches, with a glued-in mahogany neck carved in an extremely comfortable medium-C profile, and a bound rosewood fingerboard with compound 10–14-inch radius and pearloid thumbnail inlays. I love Koll’s ‘quiff’ headstock, which looks classic, custom and original all at once, without being clunky or ungainly.

The addition of a Macassar ebony face veneer with pearloid Koll logo inlay makes this model particularly stylish. Other tasty touches include the in-house clear plastic knobs and the tortoise half-heart pickguard. The Bigsby B-5 vibrato is partnered by a standard tune-o-matic bridge, and up the other end the nut is hand-cut from unbleached bone. 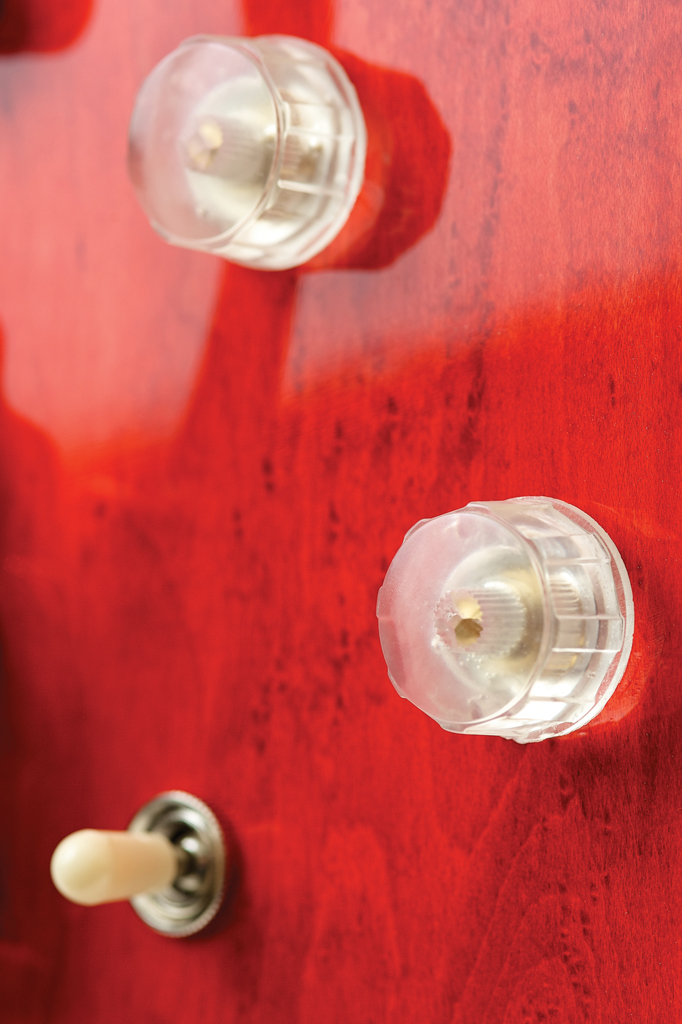 The vision carries through to an unbound, segmented f-hole, a change from Koll’s traditional classic bound f-hole. Add together all these elements and the result is a visually lively yet uncluttered whole – a guitar that’s just aesthetically right. What might pop the most for many players, though, is the trio of gold foil pickups, custom recreations of diamond-cover DeArmonds made by Curtis Novak.

I’ve often taken issue with having three pickups on guitars with anything other than five-way Strat switching, finding the Gibson-style three-way switch and four-knob setup utterly inadequate. Koll eases past any redundancies by employing just a master volume and tone control, with a three-way selector in the Les Paul position and a second on/off toggle down toward the tail end to bring the middle pickup into play in any position. Simple.

The Duo Glide’s offset body shape, with its enlarged upper-bass-bout horn, balances surprisingly well both in the lap and on the strap, so it’s a comfortable guitar to play in any position. Saul’s known for sending out guitars that are set up beautifully; this one is no exception, and it has an easy, confident playability that you’ll be quick to warm to. 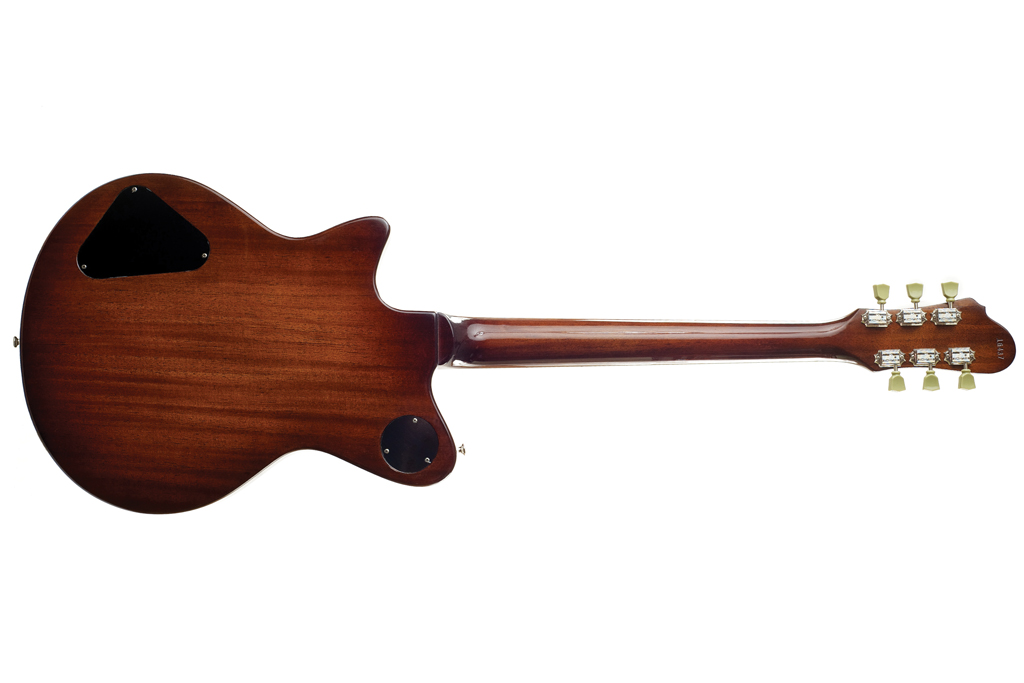 Time for my next confession: this isn’t the first Koll with gold foils that I’ve played. I put a pair of original mid-60s DeArmonds on my own Duo Glide a few years ago just for kicks, and this Silvertone Red rendition takes me right back to all the fun I had with that one.

Novak’s gold foils are impressively true to vintage, and they remind me that so much of what I love about these pickups – so much of what many players love – is their oddly contradictory nature. Hit the strings hard and the gold foils’ response is simultaneously edgy and compressed, biting and soft.

The dichotomy lends great touch sensitivity to the playing experience, and boatloads of texture, too. Highs are silky, just a bit granular and never spikey; the midrange is juicy and appealing without being obnoxious; and the lows, while on the soft side, are round and bouncy. 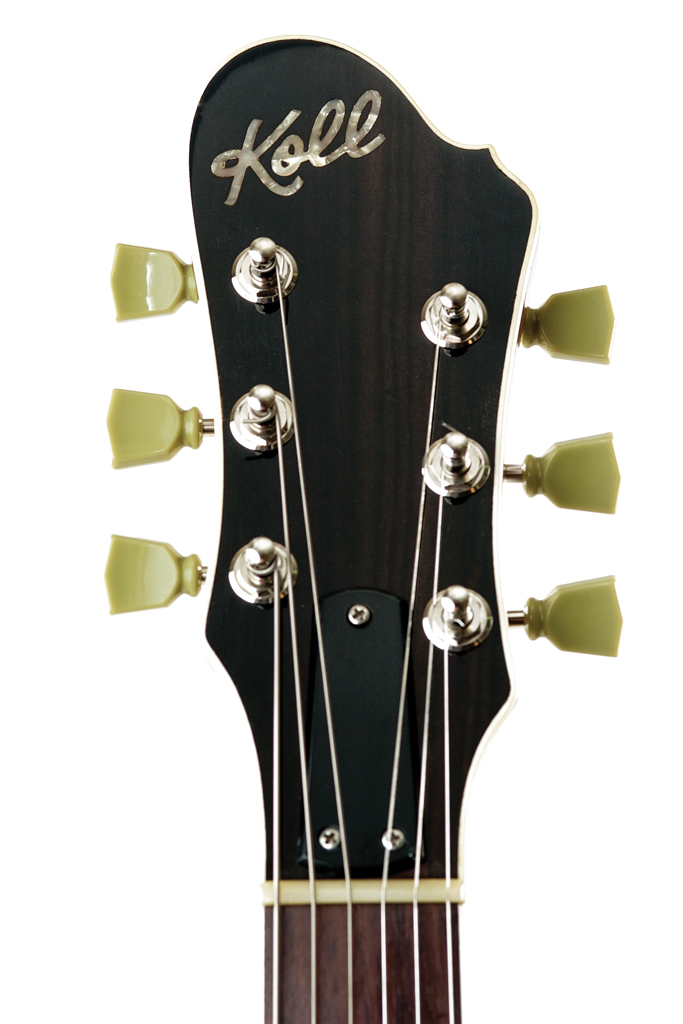 The results are the same whether I play the Duo Glide through a custom JTM45-based head and cab, a Komet 60 and cab, or a tweed 5E3-like 1×12 combo creation. Which is to say an absolute blast through a wide range of tones and different playing styles.

Another hip thing about putting a set of gold foils in a guitar of this calibre is that, as fun and funky as they can be in any of the vintage catalogue makes named previously, you really haven’t heard them shine until you’ve experienced them via a more formidable instrument.

Thus equipped, the Duo Glide is happy to Gretsch out for rockabilly or thick country twang, it’s right at home through a wide spectrum of rock and/or roll – from classic to garage to alt – and it absolutely loves the chewy hair induced by both my Roger Mayer Spitfire and Blackout Effectors Musket fuzzes. In short, this Koll Duo Glide is a guitar with a lot of character, and it’s a difficult one to put down.