This Israeli guitar brand goes further than most in pursuit of vintage guitar tone. Does the end justify the spend? 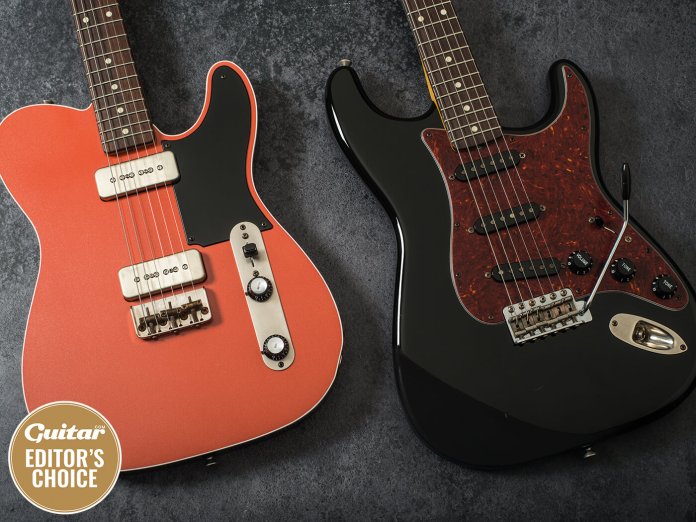 You’d be forgiven for thinking that the world needs another set of boutique Strat and Tele clones like it needs a catastrophic asteroid impact, but five minutes with either of these instruments might just change your mind. What makes them different? For Macmull, it all starts with wood.

The brainchild of luthier Tal Macmull, producer/sound engineer Amit Sadras and pro guitarist Sharon Levi, Macmull Custom Guitars is based in Jerusalem, but its high-end wares were brought to our attention by The North American Guitar in London. The range currently comprises S- and T-style models and while the Superlight S-Classic on test here is an obvious homage to Fullerton’s golden era, the eye-catching two-tone Heartbreaker Custom has more of a hotrod, Cabronita aesthetic.

The Macmull team has rigorous wood-selection criteria. In addition to hand-picking old-growth timber that’s light in weight and kiln-dried, the wood’s age when it was cut, its grain and texture are also regarded as key factors. “We strongly believe that a wooden instrument has to be lightweight in order to be dry-sounding and punchy with very sharp attack,” says Sharon Levi. “That is the starting point to all of our guitars.

“Our Superlight model is the lightest we can consistently produce,” he adds. “On the S-Classic, for example, we keep them below 3.25kg. The next range for all guitars is between 3.25-3.45kg. We do not use anything heavier than this, since we feel that is where you start losing tone.”

Owners of weighty early Blackguard Telecasters might disagree (and there are plenty), but Macmull’s meticulous process doesn’t end on the weighing scales. After the wood has been selected, the Macmull team start working according to what they’ve dubbed the RVT system, which stands for ‘real vintage tone’. This includes “matching the necks to the bodies in a way that they complete and support each other throughout the EQ spectrum”.

“The goal is to bring those voice-like midrange frequencies and the oh-so-elusive high-mids and ‘analogue’ trebles, while keeping the bass punchy and very tight,” Levi explains. “No set of electronics will give you that unless the body will resonate in those frequencies. In other words, it’s not only about the wood, it’s also about the way it is handled and constructed.”

Macmull has also discovered that the path to ‘real vintage tone’ doesn’t necessarily involve the exact replication of pre-CBS processes: “We have our own measures of construction and we tweaked them to perfection,” says Levi. “They are not a copy of the common vintage spec, since we felt we can actually improve the punch and balance of our instruments over those vintage ones.

“That said, we are not magicians and sometimes a piece of wood just doesn’t like ‘living’ as a guitar body, even after all the knowledge we have. In these cases, we will humbly put it aside and start over with a different wood.”

You’ve probably gathered by now that the Macmull Custom Guitars team sweats the small stuff. When it comes to electronics, it’s not just a matter of grabbing some boutique pickups out of the parts cupboard – Macmull winds its own.

“The pickups are just microphones,” Levi asserts. “Like any good microphone, they need to be organic and reflect the true wooden sound of the guitar. Just like choosing the right mic for a specific person, we match the pickup set to each guitar individually.”

To do that, they choose from a variety of alnico magnets and wire gauges, aiming to end up with a medium output that allows for plenty of headroom when you turn up the amplifier. But it all comes back to the wood: “Each type of alnico will produce a different frequency response,” says Levi. “We set those not to colour or interfere with the true nature of the wood.

“Our goal is to keep the predicted wood sound and not colour it with a fancy set of pre-voiced pickups. When parts are working together we get a consistent and a healthy instrument. All parts – pickups, wires, pots and caps – are also carefully picked by value to maintain the original wood sound.”

It’s perhaps ironic that this painstaking approach to instrument-building is being applied to guitars whose 1950s forerunners were designed specifically for mass production. However, pulling our review models from their cases (a vintage-style ‘poodle’ case for the Heartbreaker and a rectangular early 60s style for the S-Classic, both covered in brown vinyl) quickly extinguishes any cynicism.

Both guitars are within the specified weight ranges (3.13kg/6.90lb for the S-Classic and 3.32kg/7.32lb for the Heartbreaker Custom) and feature very light factory ageing with a smattering of small dings. Fine lacquer checking is visible on close inspection, but it’s all very restrained and shouldn’t offend the relic haters too much.

Even renowned boutique makers are sometimes guilty of using cheap-looking plastics, but there’s nothing like that here. It’s a case of ‘better the bevel you know’, as both pickguards nod to the past. The red tortoiseshell celluloid ’guard pops nicely against the S-Classic’s black finish, while its black pickup covers and knobs give the guitar a custom vibe. The Heartbreaker’s black back and sides and bound Royal Orange metallic top are complemented by a cut-down, four-screw plate in suitably retro Bakelite.

The S-Classic comes undrilled for a rear spring-cavity cover – many players argue that their Strats have an airier and more resonant tone with the cover off and the Macmull guys are obviously in agreement.

The daring lines of the headstock design may be too modernistic for some, but we like it, especially combined here with faux-bound edges and white tuner buttons. It’s savvy, too – when most of what’s going on at the other end of the neck is in thrall to the past, you have to find a way to differentiate your branding from the pack, giving it the instant recognition that helps sell guitars when your instruments are seen in the hands of rockstars and influencers.

Both one-piece maple necks have nicely rounded C-profiles. The Heartbreaker’s slightly deeper neck carve features a full-gloss nitrocellulose finish with a vintage tint, while the S-Classic has been sanded back to simulate playwear. From halfway between the nut and first fret, right up to the area behind the 13th fret, the back of the neck has been treated to resemble the grey, oxidised look of an old and much-played Fender.

There’s a sumptuous, silky smooth feel, and the fingerboard edges and 6105 frets have been treated to a generous rollover on both guitars. It’s extremely comfortable but something you may have to adjust to if you have a wide vibrato technique – the trade-off for those soft edges is that your low and high E strings can be more prone to slipping over the fret ends.

As supplied, there’s also a small amount of choke-out when executing full-tone bends around the 14-17th fret on the S-Classic’s high E string. The guitar arrived with slinky low action and temperature changes do cause wood to move around in transit, but at this price, prospective buyers will expect a flawless performance.

Nevertheless, it’s nothing a tech can’t solve in short order and in terms of feel, these Macmulls are up there with the very best new bolt-ons we’ve encountered in recent years. With their 6105 wire, 9.5-inch radius Madagascar rosewood slab ’boards and broken-in edges, they feel much closer to an old Fender that’s had a refret than a brand-new instrument, and it’s no bad thing.

Perhaps it’s that sparkling Royal Orange top, but the Heartbreaker Custom’s siren song is calling and as a result, it’s the first Macmull we choose to plug in. We’re informed that the idea for this guitar stemmed from company founders Tal and Amit testing their RVT system to see if it could deliver clarity with P-90 pickups.

“This would have been an ultimate test, since those pickups are like wild horses,” says Sharon. It’s immediately obvious that test was passed with flying colours as the Heartbreaker’s P-90s deliver plenty of articulation and clarity, without taming the bucking bronco ride that makes this type of pickup so appealing in the first place.

Combined with bespoke pickups and premium components – in particular the Luxe Bumblebee .22uF tone cap – the Heartbreaker’s simple array of controls can deliver an extraordinary range of inspiring tones. Try rolling the tone control off with a rasp of tweedy overdrive dialled in on the amp and flip to the neck position – where many guitars would be unusably woolly, single notes here are rich and complex, with a prominent ‘woo’ vowel sound that’s evocative of Cream-era Clapton available all over the fretboard.

Tune to open G and it’s deliciously swampy, and as you roll a little treble back into the mix, the sounds get throatier and rawer. It’s dynamite for slide playing and we’re also reminded of the Junior Kimbrough-influenced section of Dan Auerbach’s back catalogue. We’re a long way from the pawnshop, but the Heartbreaker nails garage blues tones with aplomb.

Switching over to the S-Classic hollows out the midrange and adds the kind of angelic upper-harmonic halo you’d expect from, well, a great slab-board Stratocaster. All five switch positions are distinct yet perfectly balanced, without the kind of extremes that make it difficult to dial in an amp tone that works well for all. The in-between settings hold their own, are never scratchy and from positions one to five, there’s the explosive dynamic range, air, depth and complexity of tone that vintage Stratocaster fans crave.

However, the Heartbreaker is still full of spank and it can even sound Hendrix-y with the right approach. Its accent is more like that of a fat Tele than an LP Special, but however you categorise it, it’s a spectacular thing to behold. A Heartbreaker indeed.

Both of these instruments have clearly been conceived and built by people who have put a great deal of time and effort into discovering what makes the best vintage Fenders tick. There’s no getting away from the fact that the pricing is up there in Fender Masterbuilt territory and beyond – realistically, you could buy a pair of team-built Custom Shop Strats for the price of the S-Classic, or even track down a player-grade 60s Fender with a refinish.

That said, given the chance to test-drive a vintage original, many players would find the Macmull an easier ride. It’s one of the handful of guitars with which almost everything you try ‘comes off’ and as such, it encourages you to step outside those well-trodden boxes. That can only be a good thing.

Elsewhere in the market, you can find a guitar with a similarly superlative neck from a Custom Shop Master Builder such as Dale Wilson, or Dennis Fano’s Novo stable, but there aren’t too many others that we’d put in the same bracket. Macmull’s burgeoning reputation for fine electric guitars is thoroughly deserved and we can’t wait to see what the company does next.