If McNelly pickups are anything to go by, there really is a tone in North Ontario. 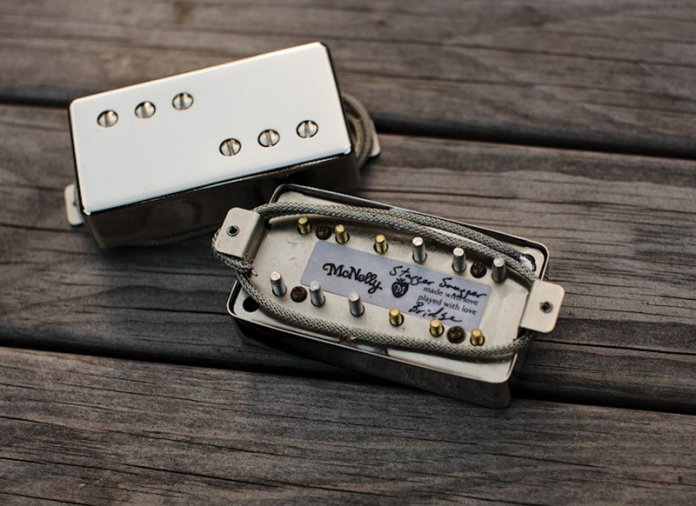 There is something about P-90 pickups that never gets old. They have featured prominently in every musical genre, from jazz and rockabilly to blues-rock, punk and even contemporary rock.

The point is that P-90s have proved themselves to be the most versatile of all the classic pickups. Despite the ongoing allure of the PAF, many would argue that the P-90 was Gibson’s best ever pickup design. So what can you do if you want P-90 tones from a stock Telecaster or from a guitar that was built for humbuckers?

Fortunately, there are now plenty of innovative pickup manufacturers, such as McNelly Custom Guitars, that are willing to move beyond standard formulas, and P-90 sound-alike pickups come in all shapes and sizes.

Tim McNelly began building custom guitars in Ontario, Canada, and always preferred to wind his own pickups. Those pickups proved very popular,  and demand grew to the extent that he now concentrates exclusively on pickup winding. He and his small team supply pickups to numerous boutique guitar makers and have appointed Home Of Tone as the UK distributor.

McNelly pickups are made with modern poly-insulated magnet wire. It’s chosen for ease of working, and McNelly considers it optimal for his pickup designs. Clearly an innovator, his designs have a stamp of individuality and the pickups are made from bespoke parts rather than off-the-shelf factory bits and pieces. You can also order them in various covers, colours and styles.

Intended as drop-in replacements, the T-Bar set should require no routing or alterations to fit into a standard Tele-type guitar. This means that both wire coils are taller and skinnier than a regular P-90’s, but you do get chunky magnets beneath the coils and height-adjustable polepieces. The magnets are ceramic rather than vintage-spec alnico alloy and the coils are wound with 43 AWG magnet wire. 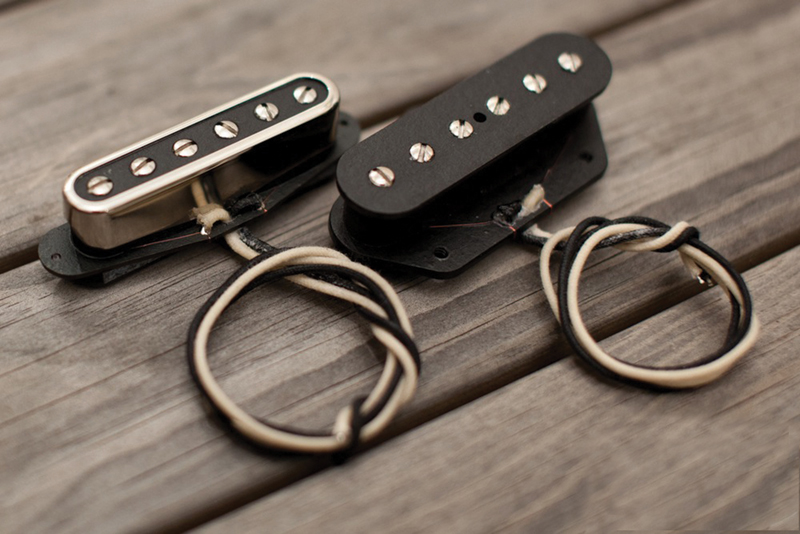 I installed this set in a T-type with a maple neck and a lightweight swamp ash body. The bridge is a standard pressed-steel item with three brass saddles. McNelly stipulates that the T-Bar set should really be used with 500K pots and a 0.022uF tone capacitor in order to get the full frequency range. My T-type has 250K pots ± which McNelly says will result in a darker tone.

Putting the T-Bar-loaded T-type up against a Gibson ES-330 proved illuminating. Despite the 250K potentiometers, the T-type sounded slightly brighter than the mellow old Gibson, but nowhere near as bright as regular Tele pickups.

The contrast between the two T-Bars is great in every sense. The bridge pickup sounds very full in the mids, and while the harmonic overtones are fairly dense and the treble is sweetly rolled off, when you switch to the neck position the tone becomes bigger, clearer and purer.

For soloing, the neck pickup certainly captures a lot of the rounded and flutey quality I associate with P-90s, and chords have a really superb chime without sounding at all trebly. In fact, the tonal balance of the neck pickup is spot on.

The bridge is more about controlled aggression, with a pronounced upper-midrange honk that is uncannily like a real P-90.

I’d be inclined to follow McNelly’s advice and extend the treble with a set of 500Ks to get the optimum effect ± but this set does sound pretty remarkable.

The T-Bars do diminish a T-type’s tendency to twang, but you get a softer and woodier growl instead.

In fact, the neck pickup made my guitar sound almost like a semi-acoustic. A smooth string-to-string balance replaces the usual spiky attack and the T-Bars’ sensitivity makes them sustain superbly and respond beautifully to playing touch.

Inevitably, the instrument’s wood and hardware have some influence on the tone, so don’t expect the T-Bar set to instantly transform your Tele into a Les Paul Special. That said, it’s pretty remarkable how close McNelly has come.

Despite appearances, these pickups are nothing like the Fender Wide Range humbucker that was fitted to Tele Customs and Deluxe models during the 1970s. The Stagger Swagger features two coils for humbucking purposes only, with just three active poles per coil. That means one polepiece per string. In contrast, true Wide Range humbuckers have 12 poles, with six hidden under the cover. 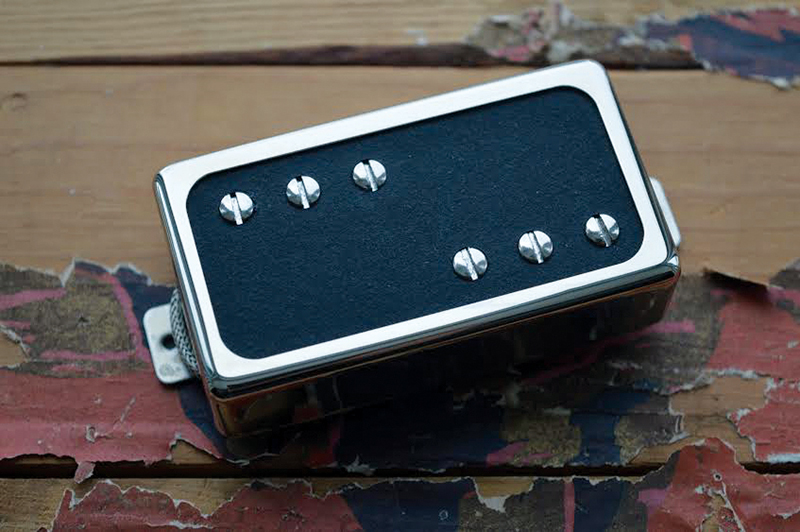 The Stagger Swagger is apparently McNelly’s most popular model, and it features alnico 4 magnets with 42 AWG magnet wire. They’re the same size as a standard humbucker, and we used a Les Paul for testing with 500K pots and 0.022uF tone capacitors.

The fact that the Stagger Swaggers sound less like P-90s than the T-Bars came as a bit of a surprise to us. However, that doesn’t mean that they are without charms of their own. They’re certainly quiet like humbuckers, but the tone is much closer to what you might expect from Fender-type single coils than an authentic P-90.

Both Stagger Swaggers are crystal clear and the frequency response extends higher than the T-Bars’. Some of that may be attributable to potentiometer values, but the extent of the disparity suggests other factors are at play.

The bridge pickup has less of the throaty midrange honk and more of a snappy quack and twang. The neck pickup isn’t as woody as the T-Bar,  but it has a shimmering clarity and superb pick definition. So, they’re somewhat less P-90-like, but judged on their own merits, the Stagger Swaggers are superb-sounding pickups. You get single-coil clarity and attack, but the muscularity and scale of the Les Paul tone continues to underpin everything.

It’s something unique. Clearer and more precise than a Filter’Tron, too meaty to be Stratty and too hi-fi for a P-90. If pushed, I would say the Stagger Swaggers most closely resemble the DeArmond single coils that Gretsch used in the 1950s.

I’ve played humbucker-sized P-90s that sound more authentic than the Stagger Swaggers, but that hardly seems to matter. These beautiful-sounding pickups could inject life into the most unremakable guitars. As for the T-Bars, I’m completely sold. They get remarkably close to the real deal sonically, and if I had a spare Telecaster I would probably be emptying my piggy bank. 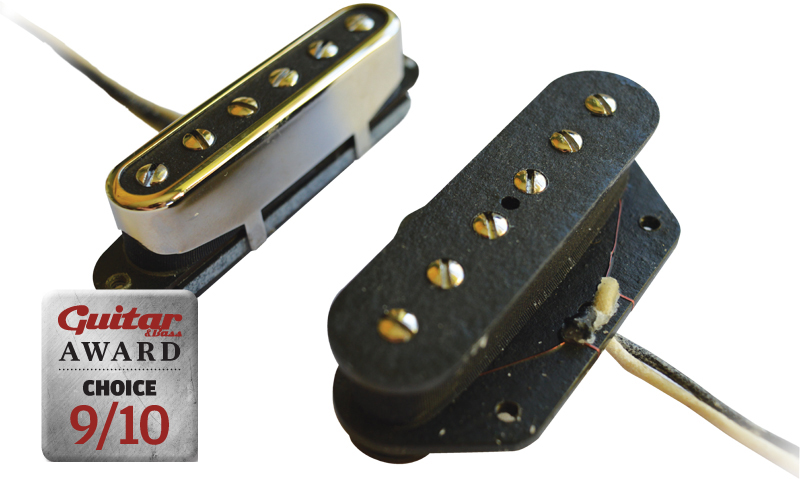 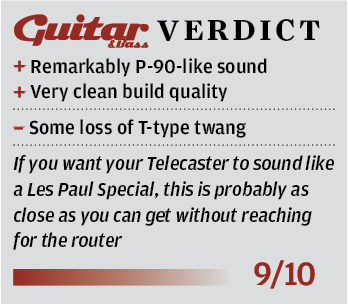 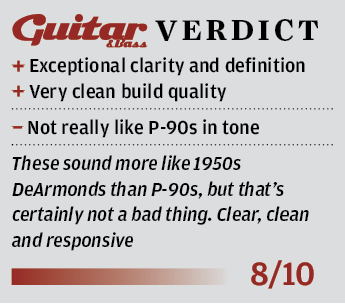