The force is strong with this one… Richard Purvis finds himself blasted off to a galaxy far, far away by the latest multi-talented digital stompbox from Meris. 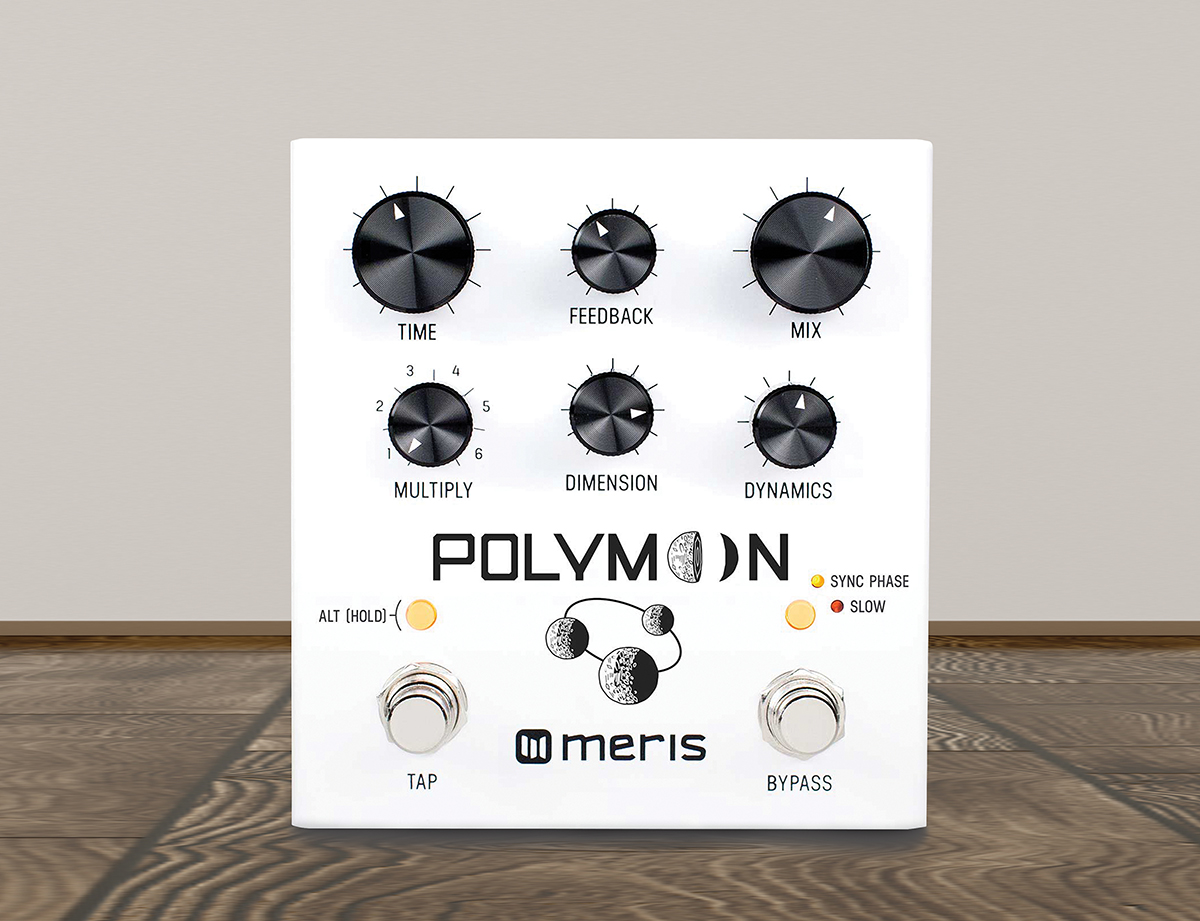 Forgive us, but we’re a bit confused. Upon pulling the Polymoon out of its box we see a graphic of lunar phases, and the words ‘sync phase’ next to one of the buttons, so we think we know what kind of pedal this must be. But then we look in the manual and find a load of stuff about delay times, filters and dynamic flanging… what on earth (or indeed off earth) is going on here?

The answer is, this is a new entry in the ever-expanding field of what we’ll call ‘soundscape generators’. The Meris Polymoon is a ‘super-modulated delay inspired by cascaded rack gear’ – meaning it’s a digital stompbox that’s been designed to sound like plugging your guitar into an irresponsibly long chain of studio processors, asking the rest of the band to retreat to a safe distance and then turning all the knobs to full.

In case you missed our review of the Mercury7 and Ottobit Jr in our last The Joy Of FX mag, Meris is a California-based venture set up by former Line 6 and Strymon engineer Terry Burton. The company’s first two pedals scored highly for tonal quality and functionality per square inch, but this is a more ambitious product. The basic journey we’re talking about is a stereo delay mashed up into near-eternal reverb, coated in whooshy phasing and jammed through an envelope-following flanger. So yes, things could get a bit otherworldly.

First, let’s go over some core specs. Like the Mercury7 and Ottobit Jr, this box has a fully analogue dry signal path, switchable true or buffered bypass, and 24-bit AD/DA conversion with 32-bit floating point DSP. There are stereo outputs and a switchable mono/stereo input, plus a socket for an expression pedal. Power comes from an included adaptor, but it’ll run off any standard 9V supply that can pump out 150mA.

And now for the controls… The three at the top are simple enough: delay time, feedback and mix. The maximum time is 1.2 seconds, the feedback can go on forever (give or take a couple of millennia), and you can set mix to full for a ‘wet only’ signal. Below that we find a ‘multiply’ control for rhythmic delays, ‘dimension’ for smearing the repeats into something more like reverb, and the confusingly named ‘dynamics’ for controlling the intensity of the flanging effect.

Stay with us – there’s lots more. Below that there’s a button for engaging the phaser and synchronising its speed to the delay, and to the left above the tap-tempo footswitch is the Polymoon’s secret weapon: the ‘alt’ button. Hold this down and all six knobs take on secondary functions. If we went through all of these there’d be no space left to talk about how the pedal sounds, but highlights include the ability to control the delay modulation, add a high or low filter to the repeats, and change the attack time of the flanger’s envelope.

Now, turning to global setting configuration mode, we can… oh, forget it. Let’s just plug the thing in and see what happens.

Our idea was to start with a simple delay, then dial in the wacky stuff. Fat chance. With all the controls at halfway, the Polymoon plunges us straight into the kind of multi-layered atmospherics that would disorientate a Martian. We’re hearing more reverb than delay at this point, and more flange than phase, but it’s noticeable that the original signal picks its way through the swirling clouds with impeccable clarity, thanks to that analogue dry-through path.

First plan out the window, we decide to take elements out one at a time in order to get our bearings before building them back up again. This, it turns out, is not as difficult as we feared. Pressing the phaser button twice removes one effect, turning the flanger dynamics down to zero removes another, and setting the dimension control to minimum leaves the delay repeats clean and un-smudged. With the tap multiple set to one, we now have a straight, lightly modulated digital delay.

The next move is to try some multi-taps… but first we plug the second output into another amp, because there’s stereo ping-pong on offer. Settings two and three are the most useful but they’re all a lot of fun, especially at slower time settings. After that the phaser comes back, and it sounds particularly psychedelic in stereo, while the flanger adds a watery dimension without getting too metallic.

A quick twist of the dimension knob sees those delay repeats begin to dissolve into an eerie, immersive reverb – and this is where the real hugeness happens. With feedback at full, it’s quite a trip just to play a few notes then put your guitar down and listen to the waves of hypnotic ambience that the Polymoon pours back into the room. You will not want to go back to mono at this point.

The only pity is that there’s no easy way to store these sounds to recall later. An expression pedal lets you fade between two settings, which can be a spooky delight, but for proper preset storage you’ll need an appropriate MIDI device instead. We wouldn’t bother, though – navigating the Polymoon soon becomes easy, and if you miss one fantastical soundscape there’ll always be another one along in a minute.