The champion of cheeky miniature pedals has loaded a bunch of effects into one rock-minded unit. Richard Purvis gets behind the wheel for some mini monster trucking… 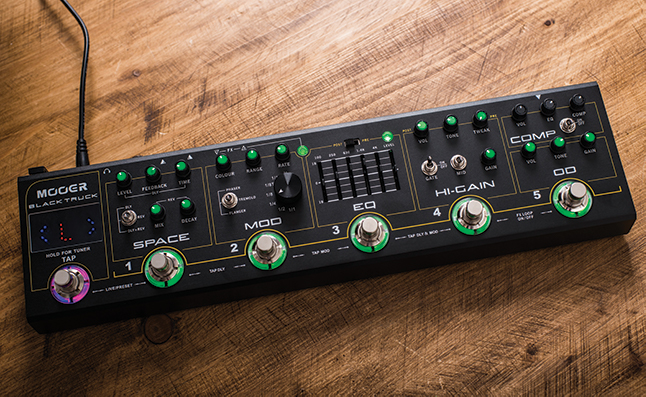 If you look closely at the Black Truck, you’ll see an extremely compact multi-effects unit with six footswitches across the bottom. If you look slightly less closely, you might (just about) see an actual black truck, with six sets of wheels and the driver’s cab at far left. Bit cheesy? Be thankful they didn’t take it too far and have smoke billowing out of the headphone socket.

Mooer was there at the start of the current mini-pedal boom, and has over 60 of them in its current range, so it really can’t have been much of a challenge to take a handful of those effects and line them up in a single enclosure. The resulting unit is about the size of an overstretched ciabatta and not much heavier.

There really isn’t much more to the Black Truck than what you see on the top panel: the controls may light up sci-fi green but they’re pure analogue, so there’s no storing and recalling of preset sounds here. You can, however, spare yourself a little bit of toe-dancing by saving basic ‘scenes’ of which effect modules are switched on. Single footswitches can then be assigned to these groupings rather than to individual effects.

So, we start at top right with the only non-footswitchable module: a simple three-knob compressor, based on the Mooer Yellow Comp and engaged via a toggle switch. Below that is the overdrive, a version of Mooer’s rather fine Tube Screamer type, the Green Mile; and next along is a high-gain distortion that’s been designed specifically for the Black Truck with “all of your hard rock and metal needs” in mind. This includes a noise gate and a switchable midrange boost/cut, but there’s more tone-shaping on offer: to the left of that module is a five-band EQ that can be placed before or after the distortion.

The digital side of the Black Truck kicks off with a modulation section that can be flipped between phaser, tremolo and flanger, and has a time subdivision dial complete with ‘random’ mode; then we get reverb and delay squeezed into one, with the option to engage either or both together.

And that’s basically it. The ‘front wheel’ is a tap tempo switch that doubles up as a basic tuner; on the back panel we find a loop for inserting other pedals between the analogue and digital halves of the unit, plus twin outputs (described as ‘true stereo’, though the effects are all mono), and an output-muting headphone socket with its own level control.
As an introduction to the world of multi-effects, it seems like a pretty thorough selection – and if you’re not fussed about the compressor or the high-gain distortion, you also have the Red Truck option. That one’s around £50 less, and looks a bit more like a lorry. 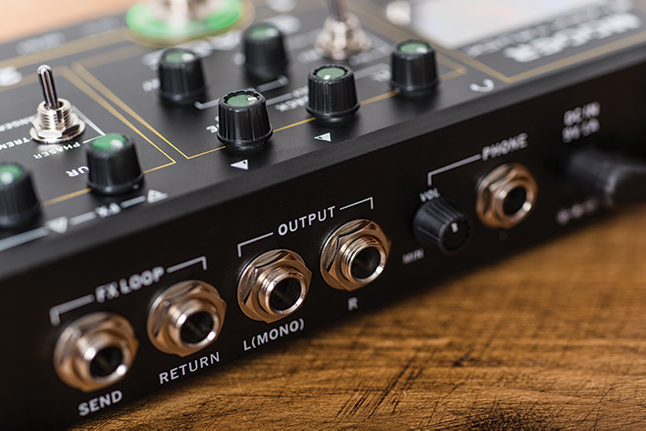 We start out by scrabbling around for a 9V power supply that can pump out the 1,000mA current specified in the manual – that’s much more than the average single stompbox demands, and there’s no adapter supplied in the Black Truck’s neat padded case. In the end, after getting half an hour’s use from a 200mA Electro-Harmonix unit before it becomes hotter than the surface of Mercury and shuts down, we dig out a 500mA Line 6 supply that gets us through the testing process without losing its cool.

Not the best of starts, but switch on the compressor and you may well forgive all. With the ‘comp’ dial around nine o’clock and tone cranked up to keep things perky, it adds a healthy dose of fullness and presence without any thumping or pumping. It can get silly when pushed, but in the right context this is certainly a compressor you could leave on full-time.

We shan’t dwell on the overdrive for long – as expected, it sounds just like a Tube Screamer, with that classic combination of smooth break-up and added upper-midrange snarl. The high-gain distortion has more to prove… and it turns out to be every bit as fiendish as we were hoping. Non-rockers look away now, but this is a wall of righteous noise, blisteringly powerful yet clear in the top end and equally strong at the bottom. The tone controls work well enough, but you’re going to want to set the EQ module into a big pointy V-shape to get that full-on scooped chugging tone. It’ll get you there all right, with the gate doing just enough to tame the background roar and sharpen up the staccato bite of palm-muted chords.

There are no surprises in the digital half of the Black Truck. All three modulation sounds are perfectly workable – the flanger is a particular highlight, excelling at subtly atmospheric settings – and having control over the shape of the tremolo is really useful, even if ‘random’ mode is a little less chaotic than we’d like.

That just leaves us with the reverb and delay section – both of which sound clear, natural and well balanced, and work well as an ambient double-act. As long as you don’t demand spring-like reverb judder or tape-like delay wobbles, there’s nothing at all lacking here.
One thing that could be better is the action of the footswitches, which engage only when you lift your foot off them rather than at the very moment of stompage – an irritating quirk that can make those big on-the-beat changes tricky to time. This is not an issue we’ve had with fully analogue Mooer pedals – could it be a side-effect of making the switches programmable, we wonder?

No such complaints about the headphone output, which produces a respectable sound for silent jamming into the early hours. There’s a hint of that plasticky ‘DI’ quality, but we’ve heard a lot worse… and that’s true of everything about the Black Truck, which is unlikely to replace anyone’s lovingly assembled pedalboard, but will do a solid job for home practice and hand-luggage-only jaunts. 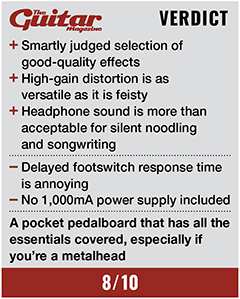