After filling the gap in its range for a loud, all-in-one bass amp with the splendid OB1-300 combo we reviewed in March 2016, and with louder gigging requirements taken care of thanks to the AD, 4 Stroke and OB1 heads, Orange has switched its focus to the opposite end of the power- requirement spectrum, effectively redesigning the whole of its entry-level bass combo range in one fell swoop.

A parametric EQ circuit inspired by the aforementioned 4 Stroke is featured across the whole range, while the larger Crush Bass 100 and 50 are equipped with interactive gain and blend controls that replicate the bi-amp style performance of the OB1 Series. It’s great to see the attributes of higher-end models masterminded by Technical Director Adrian Emsley trickle down to the most affordable bass amps in the company’s catalogue. 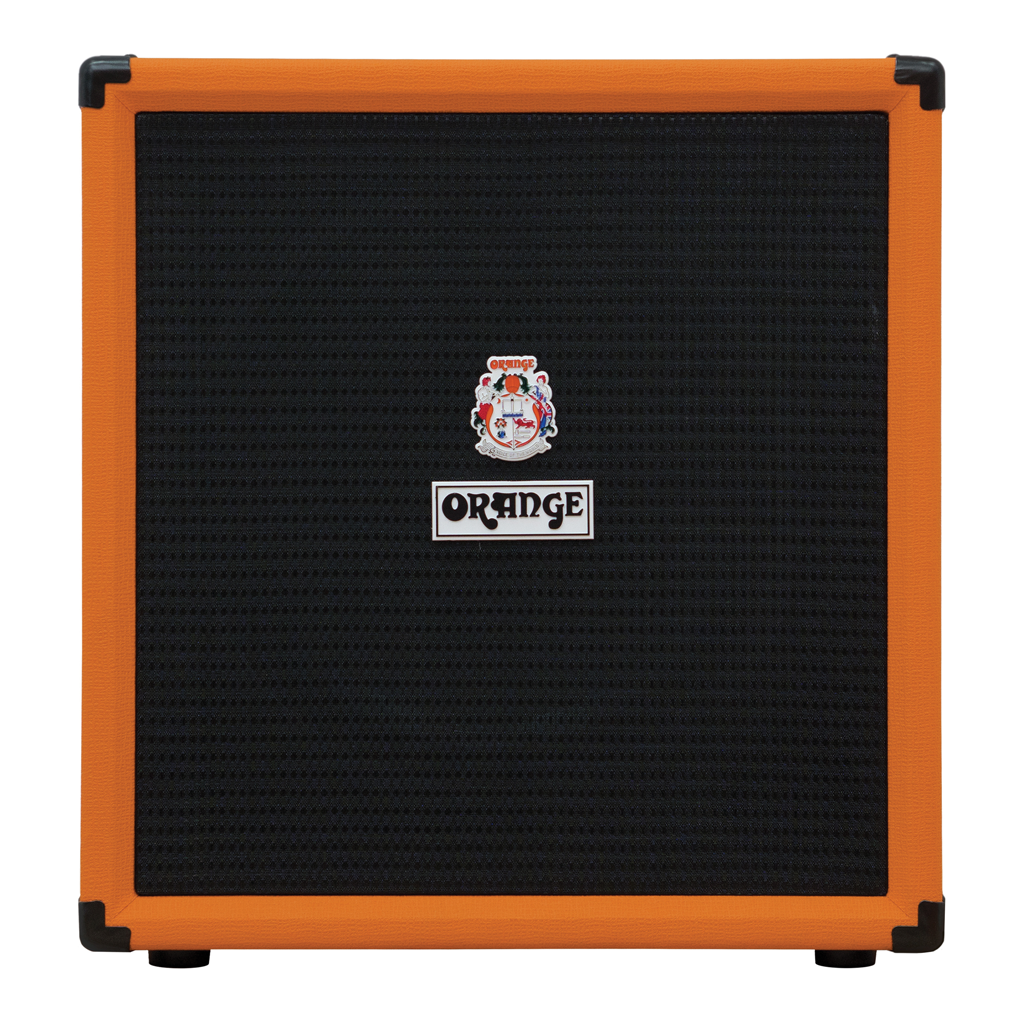 The loudest and largest amp in the new line, and designed with gigging squarely in mind, the CB100 is a particleboard box standing 550mm high, 510mm wide and 355mm deep. It weighs 24.25kg (53lbs), which isn’t bad for a traditionally appointed 100-watt analogue unit, and features side-mounted, recessed steel handles.

The front vista is dominated by a black cloth grille, bearing the iconic maker’s badge and `coat of arms’, which protects the custom 15-inch speaker behind. Orange tells us the speaker has better cone excursion (it moves further from its resting position) for improved bottom-end response, and chunkier magnets. The cabinet is also ported for even greater boom.

The control panel bears the familiar quirky graphic representations of the controls, which include three oversized black knobs – one volume and two for Orange’s overdrive feature: gain for the amount of spite and blend for how much of it you hear. Four smaller dials make up the EQ section, with bass (+/-15dB @75Hz) and treble (+/-20dB @5kHz) flanking middle (+/-15dB) and a frequency sweep that runs clockwise from 300Hz to 2.7kHz, although the control isn’t labelled. Orange also includes a switchable chromatic tuner,  which engages without muting your out-front sound.

Effects loop and blend footswitch (not supplied) jack sockets are located at the back. The control panel houses a headphone jack socket that utilises Orange’s CabSim circuit (which emulates speaker-cabinet response), XLR balanced out with a ground/lift switch and an audio in mini jack socket for plugging in a phone or tablet.

On plugging in and after utilising the efficient onboard tuner, the sound is clean and clear across the neck, with a definite feeling of underlying body and width – a great base sound for bass playing. Dialling in some bass EQ injects a warm thud into proceedings without blurring note detail, and increasing the treble unearths a raspy edge and biting attack without the snappy click you get from a horn.

These practical variations are enlivened by the midrange section: on the clockwise side of the frequency dial, boosting the level writes a tonal story of increased body with a darker hue and thud that’s a tad mushy at the extremes, but tightens up towards centre position. Notes come into sharper focus on the clockwise side, accruing a slightly nasal quality that hints at the tell-tale `burpy’ attack. So, there are plenty of practical variations, plus you can add subtle buzz or full-on fiery distorted fare with a few simple tweaks to the blend and gain controls. 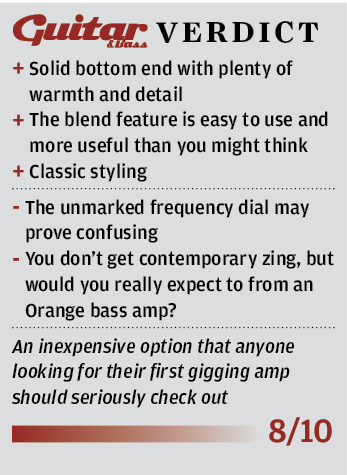 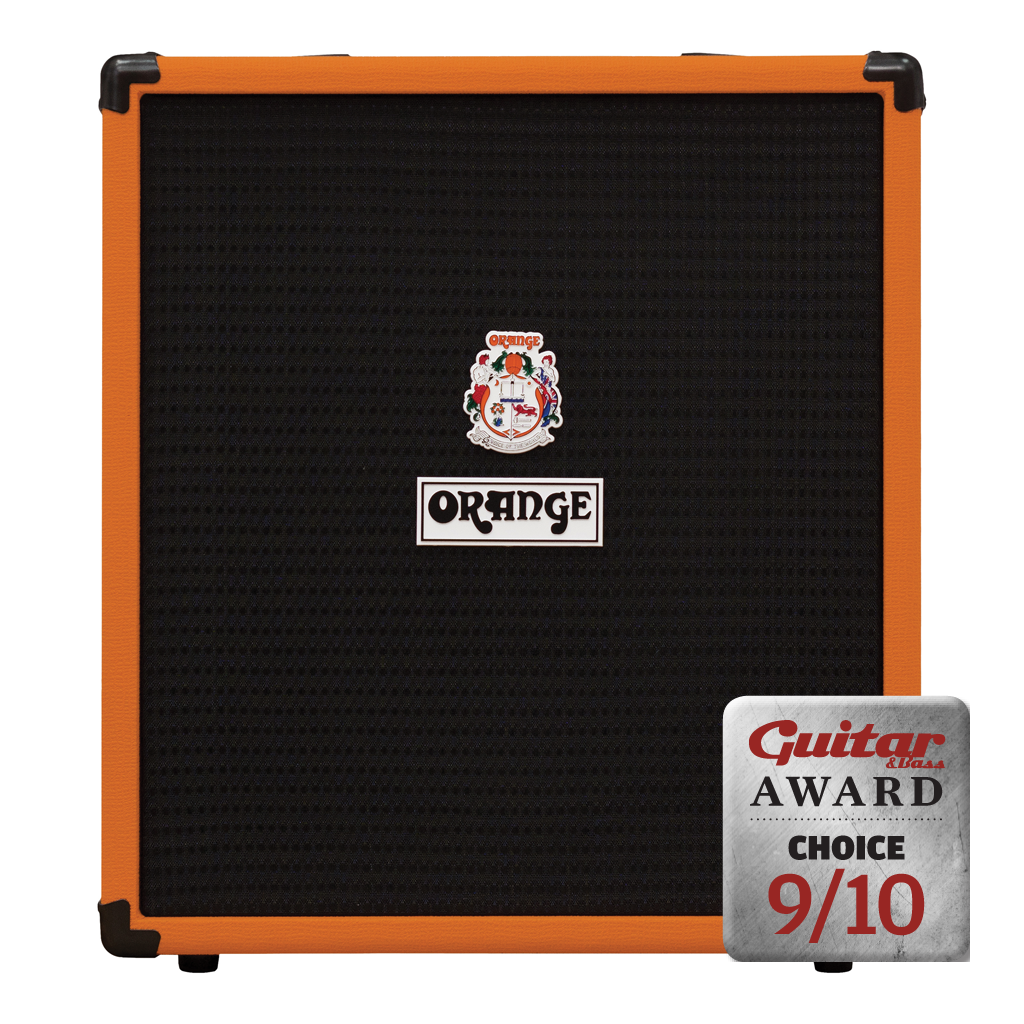 A similarly no-nonsense cube, the CB50 is an ideal rehearsal combo in both size and output. At 485mm high, 430mm wide and 275mm deep with a weight of 14.45kg (32lbs), it’s easily transportable via the top-mounted single black strap.

A 12-inch custom speaker lurks below the grille, with porting this time at the back and, save for the balanced XLR out, Orange has kitted out the 50-watt model with the same features. So, you get the three-band EQ with sweepable mid and the distortion circuit with gain and blend controls, plus the super-handy chromatic tuner.

There are jack sockets for input, effects loop, the blend footswitch (not supplied) and the CabSim-enabled headphone out, plus a mini jack for plugging in a CD player, MP3 device or similar.

It’s a very similar clean-and-clear tonal picture, albeit with a slightly tighter vibe courtesy of the smaller speaker. There’s plenty of depth from boosting the bass EQ without ever getting seismic, the extra focus to the tone being perfect for lower volume levels and the smaller rooms that the 50 is designed to frequent.

Faster speaker response also gets you more aggressive cut and bite when you dial in more treble, and if you combine this with a boost to the mid dial and a chunk of bass, the vista is tight, wiry and pleasingly impactful. All in all, it’s a decent selection of practical, natural-sounding variations. 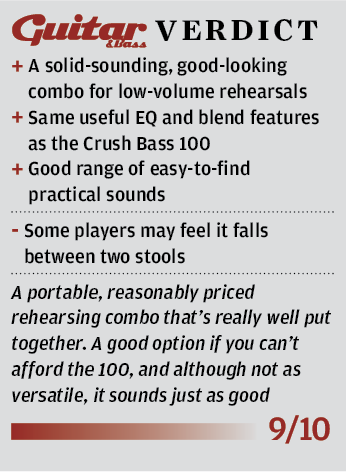 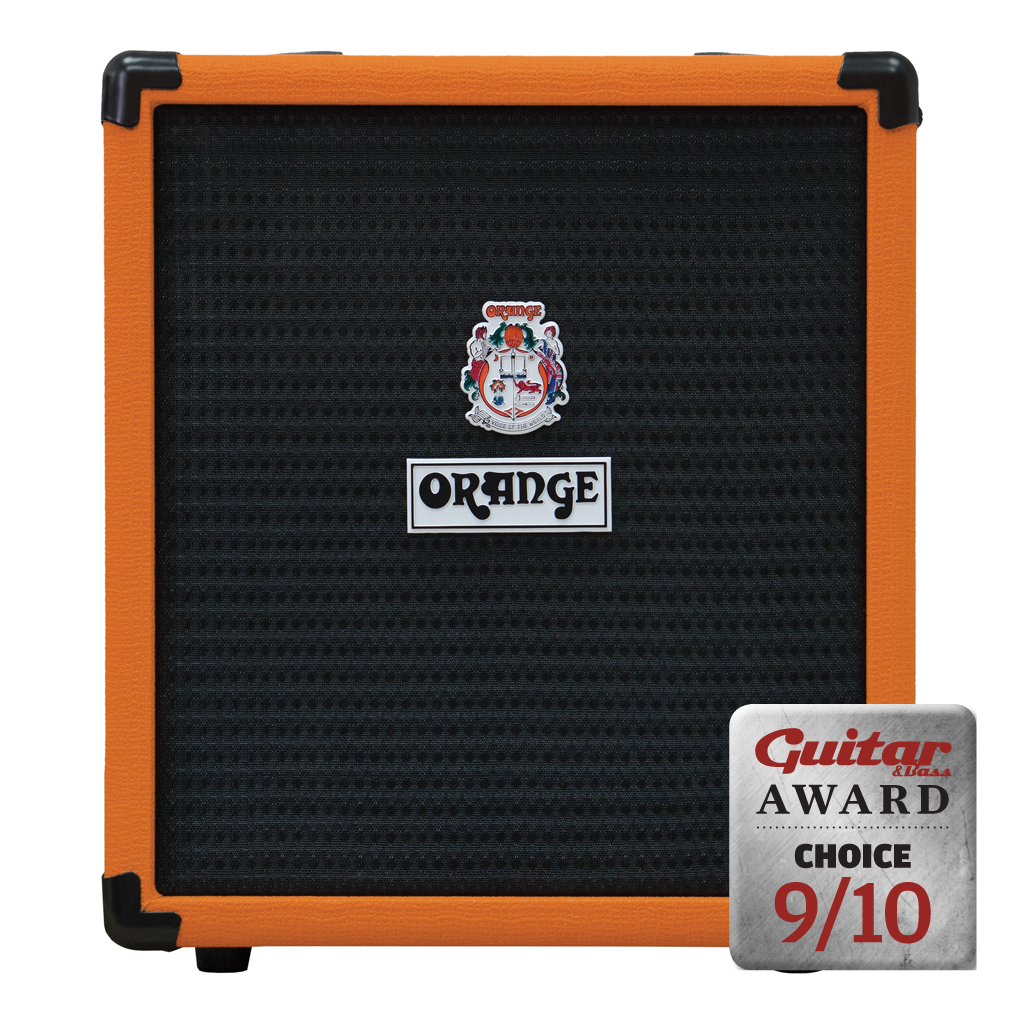 Designed with high-tonal-quality home practice in mind, at 365mm high, 325mm wide, 235mm deep and 8.3kg (18lbs) in weight, the CB25 is a fraction too big for the desktop, but it will fit neatly into an unused corner. 25 watts is more than enough for small-room jamming, but Orange hasn’t simply provided an amp for this purpose without putting any thought into it. No sir.

There’s no distortion circuit, but the eight-inch speaker’s boom is aided by rear porting, plus it has exactly the same EQ, replete with programmable midrange, and a chromatic tuner. There’s an aux in mini jack and CabSim-loaded headphone out jack socket, but no effects loop – we suspect that it would be surplus to requirements on an amp of this size.

As with the 50, the CB25 emits a clean, focused tone, and while you shouldn’t expect room-shaking lows, there’s more than enough bass on offer to produce a well-rounded overall sound. Variations are similar to the 50, with extra cut and bite at the top end, darker snappy punch and brighter, tighter attack from the midrange.

There’s plenty of power on offer for this little combo’s designated purpose, and you won’t sound weak or synthetic – the tone it emits is fully realised. As with the other two members of the Crush bass fraternity, the emphasis is on practical sounds, and it’s done really, really well. 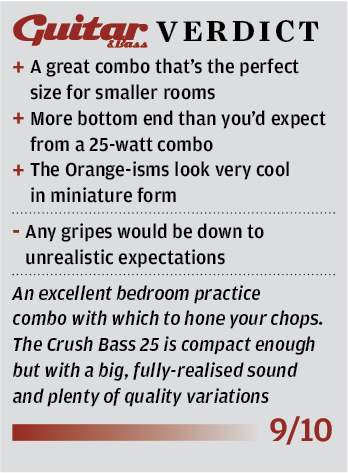