Orange’s art department has been having fun again, this time decorating an amp-style overdrive and a wild octave fuzz. 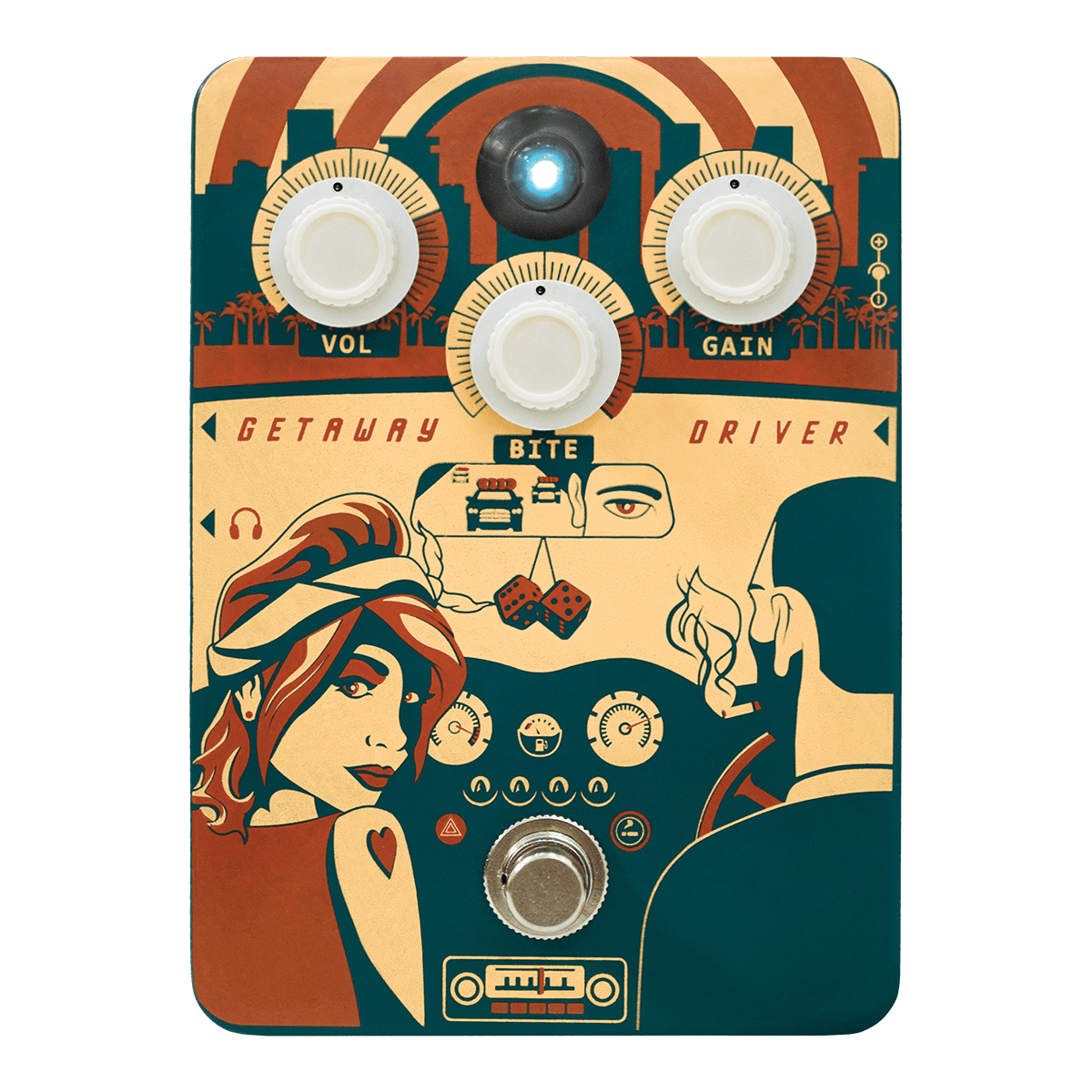 Up until now, the Orange stompbox venture has been an exercise in sniffing out interesting niches in the stompbox world. So, we’ve had a pair of EQ devices, an ABY switch and a compressor are not exactly pedalboard staples. Now, though, it seems someone’s decided it’s time to wheel out the big guns. The big, hairy, sweaty, denim-clad guns.

Orange, remember, is a company that made its name with some of the loudest amplifiers of the 1970s. Well, now that heritage is making itself felt in the pedal range: these two latest additions are an overdrive that’s billed as a 70s amp in a box, and an octave-adding fuzz that nods squarely in the direction of the Foxx Tone Machine of 1971.

Like the rest of the Orange effects line-up, these are hefty metal units with massive blue status LEDs and side recesses to protect the input and output jacks. The Fur Coat has the usual bar across the centre to prevent your spangled platform boots from the accidentally knocking controls, but this hasn’t been deemed necessary for the Getaway Driver, whose three knobs are safely tucked away near the top of the enclosure. Well, all the more room for that stylish picture of a dodgy-looking couple with a police car in their rear-view mirror. 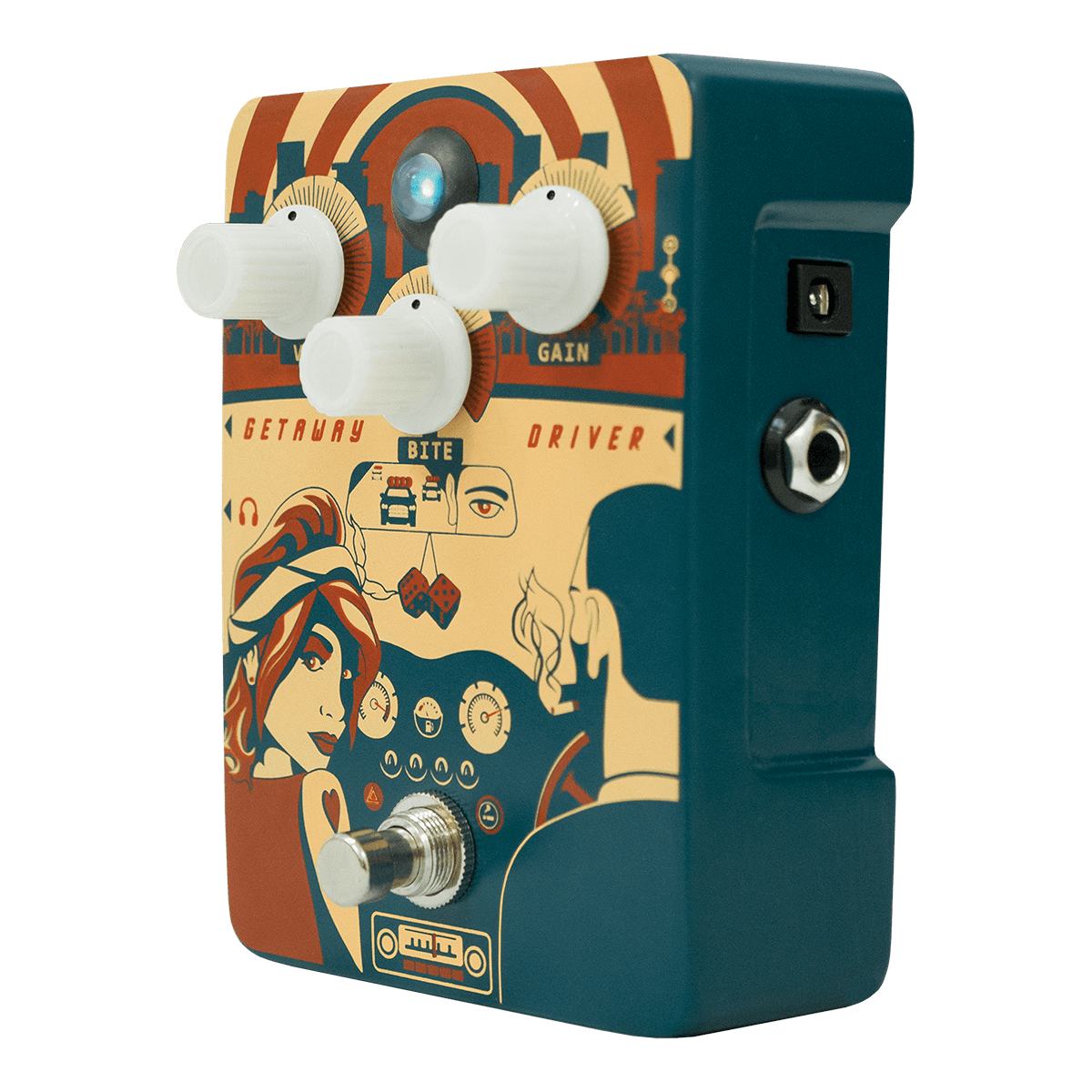 Fascinated though we are by the unknown fate of the two fugitives on the front, it’s the insides of the Getaway Driver that deserve our full attention. This pedal has been voiced with reference to a number of 70s amps, and promises everything from a clean boost to classic roaring overdrive. Orange says the drive comes from single-ended JFET circuitry running in Class A, with a charge pump turning your standard nine volts into 18 for greater headroom. And in fact, you can run it from a 12V adapter to make it sound even bigger.

The three white knobs are simple enough – volume, gain and bite (tone) – but this Driver has a couple of secrets under the hood. Unscrew the baseplate and you’ll find a button to tame the treble in the 20kHz zone… then screw it back on again and you’ll notice there’s a second jack socket on the left side. This is a headphone/DI output with speaker simulation; it’s active even when the overdrive is bypassed, so in theory you could run this output into the PA via a DI box and use the Getaway Driver as a two-channel amp. 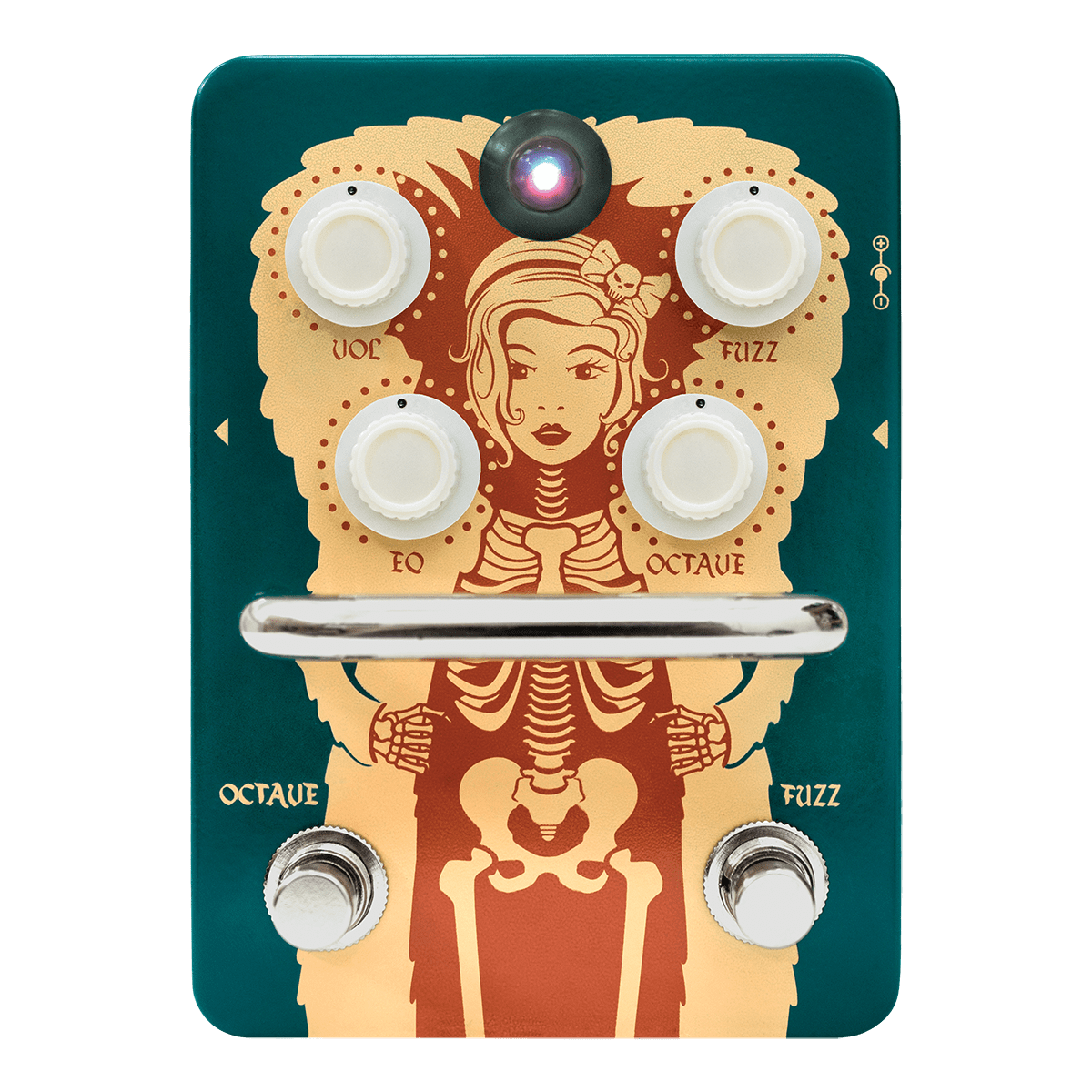 The artwork on this one is downright macabre – please, Orange, tell her to zip it up before she catches her death. More importantly, the Fur Coat is a vintage-style octave fuzz powered by a combination of silicon diodes and germanium transistors.

If you ignore the extra footswitch and the dial marked ‘octave’, this could pass for a standard filth-generator, with the usual controls for volume, fuzz and EQ. But that fourth knob is interesting: it means the added high octave can be blended into the signal to taste, which is not something you could do with a Foxx Tone Machine.

Fuzzes don’t always get on well with buffers, which is why this is Orange’s only true-bypass stompbox; we’re advised to place it first in line after the guitar for best results. Oh, and if you’re unfamiliar with the octave fuzz effect, you should probably have a listen to the pedal that did it first: Jimi’s Roger Mayer Octavia, as used on Purple Haze…

The Getaway Driver is a one-box festival of pure rock. With all the controls at noon it adds a heavy dose of old-school grind, demanding to be fed power chords, thumping riffs and aggressive solo runs. The overdrive gets more amp-like as you crank it, a mix of strong mids and sweetly compressed treble really bringing out the best in a Les Paul at full gain; but you can also pull it right back to zero for a simple, uncoloured clean boost. Well, clean-ish.

The difference made by that internal switch is minimal, but it might be just enough to save your ears if you’re using single-coils and a spanky amp. And the headphone output? It sounds surprisingly decent for silent practice, though it’s not entirely free of that plasticky straight-into-the-desk effect that we all know and don’t love. 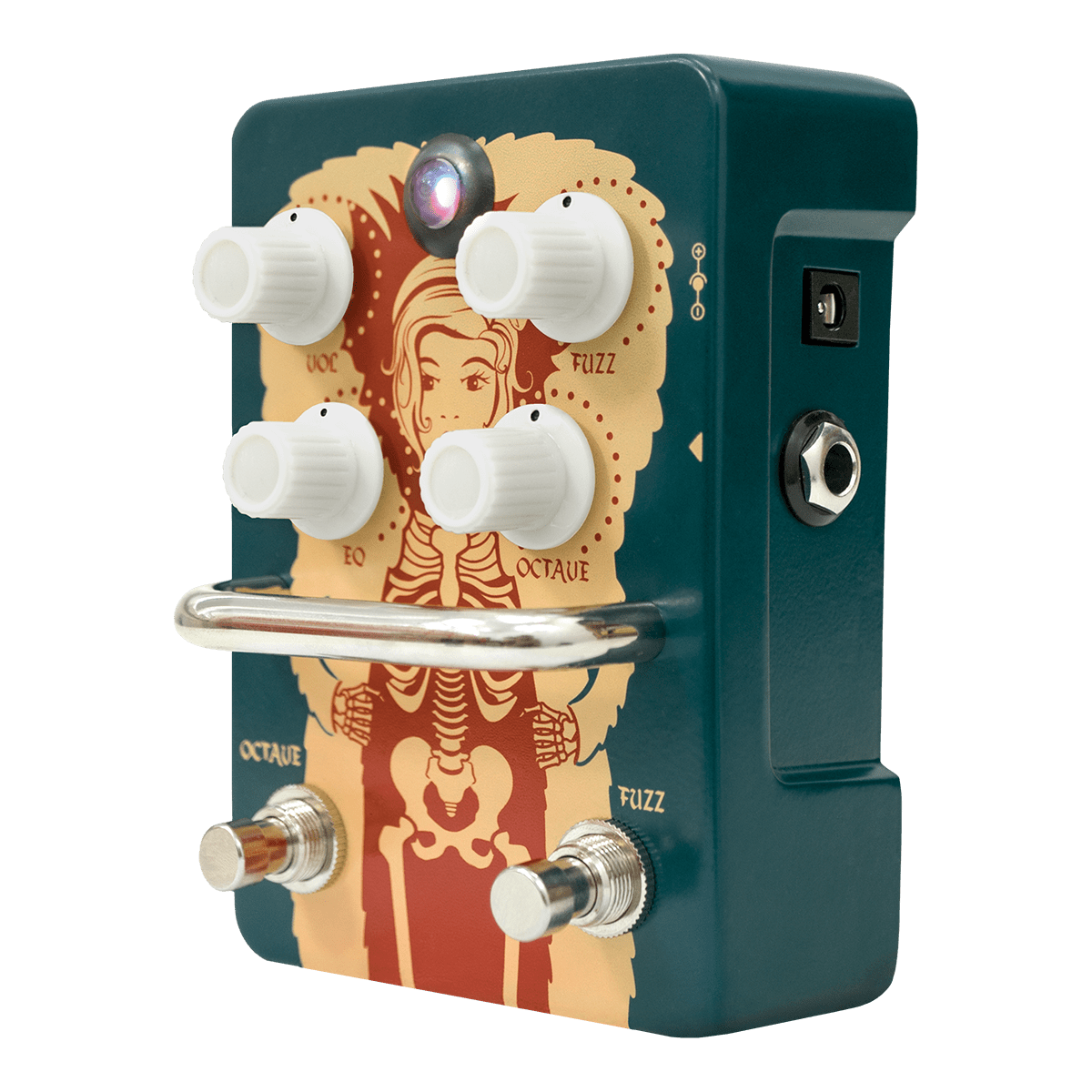 The Fur Coat couldn’t sound more different – this is an archetypal warm, thick, smooth, all-obliterating fuzz. Keep the EQ shy of halfway and you’re broadly in Big Muff territory, but there’s plenty of biting treble to add in if you want it. Then step on the octave footswitch… and prepare for a sudden injection of rasping rage. It’s very much like a ring modulator: pure power chords sound viciously cool, but play a simple minor seventh and you literally won’t be able to make out a note for all the overloading harmonics. If you like atonal walls of noise as much as we do, you’ll love this.

But what we’re really here for is the single-note stuff. There’s an added wiriness to lead lines in all positions, and once you get up around the 12th fret the higher octave really starts to climb out and take over… or not, depending on how bold you’ve been with the blend control. Either way, it’s spiky, psychedelic, and not for the sonically conservative among us.

By the way, both of these pedals do sound a touch bigger and brighter with a 12-volt power supply – it’s not essential, but you might not want to go back to nine volts once you’ve tried it. 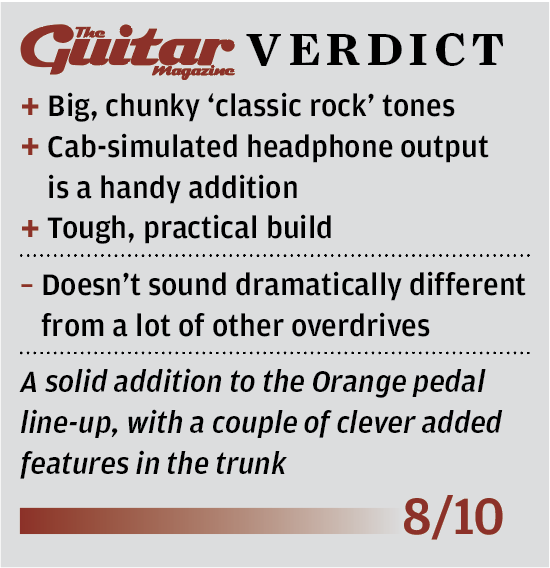 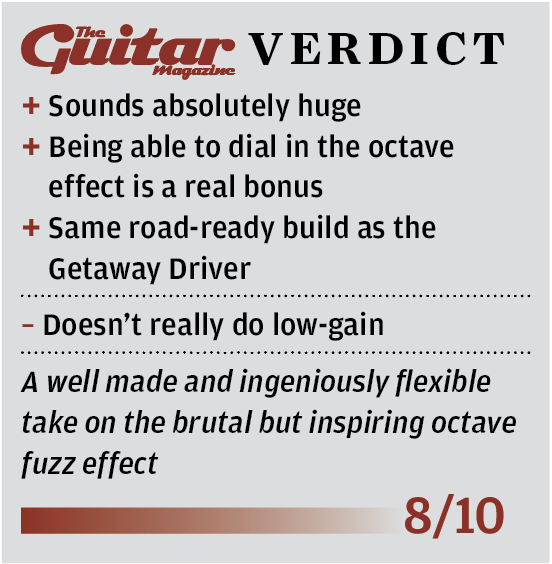