Orange’s latest hybrid head crams more gain than ever into a titchy package. 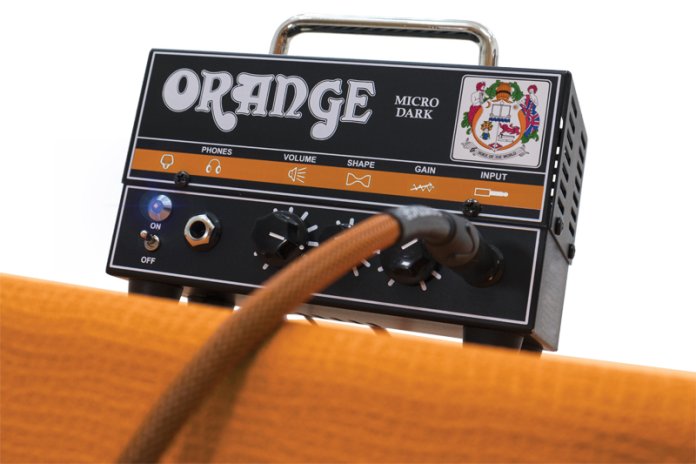 Ta-daa! Orange cranked up the excitement before the launch of the Micro Dark with a social media campaign that challenged us to guess what its game-changing new product might be. An amp that could control the human mind via Bluetooth? A rotary speaker cabinet that could also churn butter? An all-valve spaceship? You could be forgiven a slight twinge of disappointment when it turned out to be essentially a cross between two existing products: the Micro Terror (very small) and the Dark Terror (very rock).

It’s still a fine idea, though, and we’ll forgive them if it sounds good. This is the latest in what is becoming a fairly long line of deceptively teeny Orange amps, all of them descended from the original Tiny Terror – which really was a game-changer – and in stark contrast to monstrous heads such as the OR120 with which the company first made its name.

Like the Micro Terror, this is a 20-watt hybrid amplifier, with a solid-state output stage and a single ECC83 in the preamp. The main benefit of this format is that it allows the amp to be genuinely `micro’, weighing little more than the average stompbox and taking up less space than a weasel’s wardrobe.

For a more practical comparison, it weighs less than a Blackstar Fly 3. The metal handle on the top hardly seems necessary when the whole box is so easily grabbed; maybe a padded case would have been more useful. 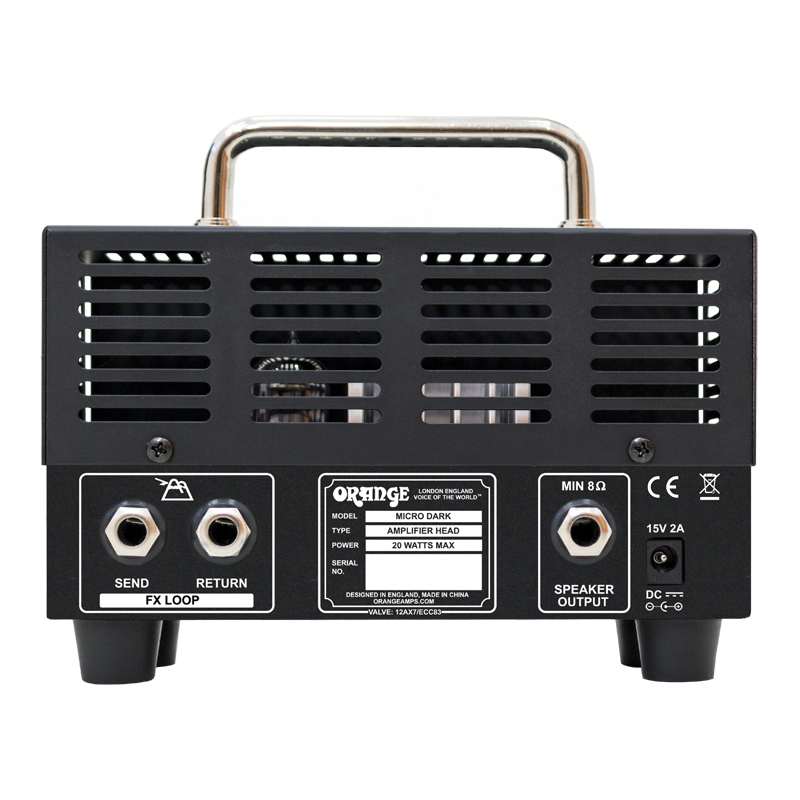 On the inside, there’s a new high-gain circuit – four stages, so not all of it can be coming from the valve – and there are several other differences from the white-cased version. The aux input is gone, a buffered effects loop has been added, and the tone knob has been replaced by a `shape’ control, as found on the other Dark models.

More than being merely a mid-scooper, this is an extremely clever tone-shaping tool and was the thing that we liked most about the Dark Terror when it was released back in 2011. Aside from that, there’s just a master volume on the left and a preamp gain control on the right.

The Micro Dark runs on 15 volts and the included power supply comes in two parts – the adaptor itself and a separate kettle lead. Unscrew and lift off the `cage’ part of the amp for a better look at the chassis, and the first thing you’ll notice is just how packed the circuit board is.

The supplied valve is a JJ and there’s a metal heat sink at the back, which probably accounts for more of the unit’s 780g weight than the rest of the internal components put together.

A final feature worthy of note before we leap into the darkness is the headphone output, which has CabSim circuitry to “faithfully emulate the sound of a mic’d Orange 4×12 cabinet”. This can also be used as a DI output for silent recording.

In the words of Neil Young, rock ‘n’ roll can never DI… so we’ll use the speaker output to begin with. Orange suggests its own PPC108 as a partner; this closed-back 1×8-inch cab is available in black, and would no doubt look proportional with the diminutive Micro Dark on its shoulders, but a 20-watt rock amp surely deserves bigger and better. 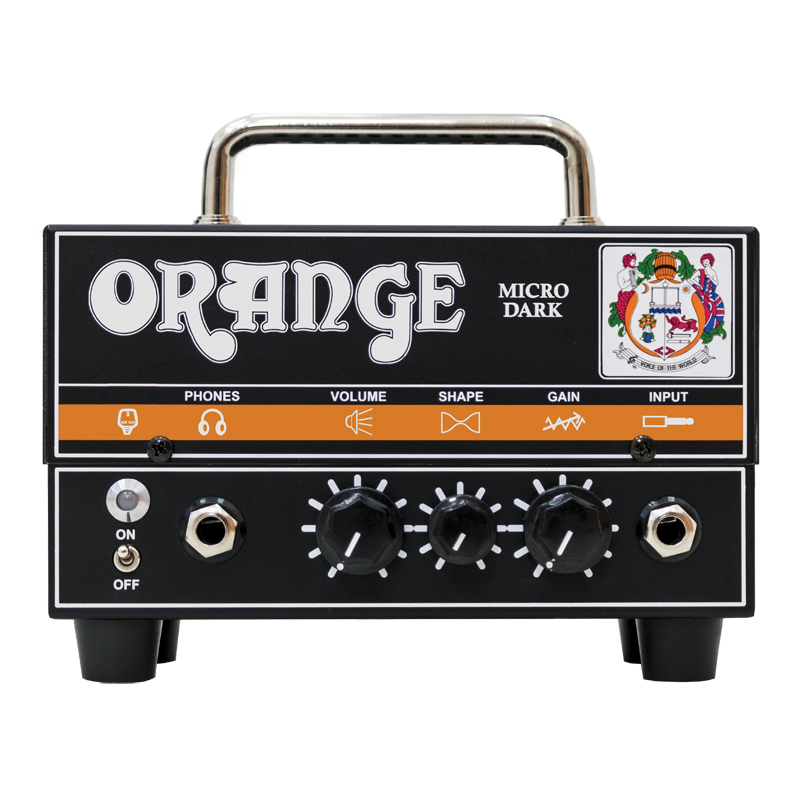 But keep those tattoos covered for a moment, because this little thing does genuine cleans. With the volume set to full, single coils come out totally pure anywhere up to 10 o’clock on the gain dial ± and while it sounds a tad lightweight through the Greenback, it’s every bit as loud as an all-tube 20-watter through the bigger cab.

This is not the most sophisticated tone, but there is a recognisable `Orangeness’ to the midrange, which can be accentuated or dialled out completely with the shape control. The master does a decent job of keeping things realistic at whispery levels, but this feature is surely going to be more useful once we move into overdriven settings.

Those settings arrive very quickly between 10 and 11 o’clock on the gain control. Don’t expect sweet and spongy compression, but the crunch is smooth and natural, and by tweaking the shape you can set the EQ profile anywhere from woody British clonk to scooped American thump. 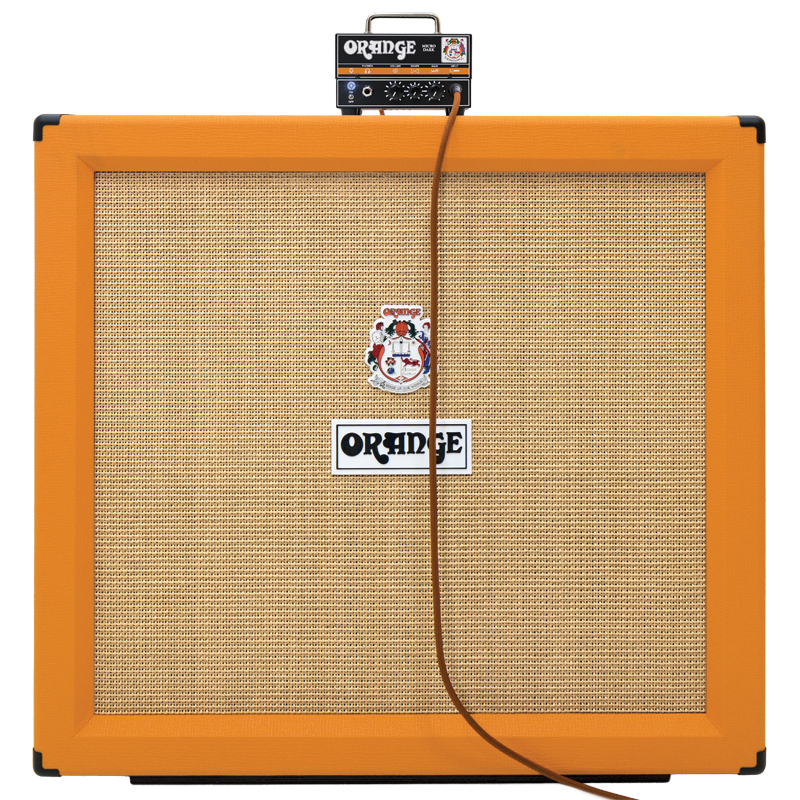 Single coils tend to sound happiest on the chunkier left side of the dial, and humbuckers on the right, but you may find that your own guitars trample over that generalisation. What is clear is that this amp sounds way better through a large cab than a small, low-wattage one. It would look ridiculous perched on a full-size 4×12, but we’re betting it would sound anything but.

And when you really, really crank it? The effect of the shape control now becomes even more dramatic: it’s basically classic rock to the left and modern metal to the right, and palm-muted djent chugging is not out of the question with the bigger cab.

Now is when you might want to have another look at the master volume control, if you have neighbours who aren’t deaf already.

You should also be prepared to have a fiddle with your guitar’s tone controls, as the lack of any dedicated treble filtering on the amp can become an issue. A noise gate would come in handy, too, as you’re never very far away from a feedback squeal with the gain set high… but that’s not going to save you from a noisefloor that was already on the high side at cleaner settings, and might now become slightly oppressive.

Finally, a word about the effects loop ± which works exactly as you’d want it to without adding any more noise ± and another word about the headphone/DI output, which sounds decent but won’t really cut it for serious recording projects. It’s bright, but not in an entirely convincing way, and scooped high-gain sounds are so fizzy they’ll make you burp. 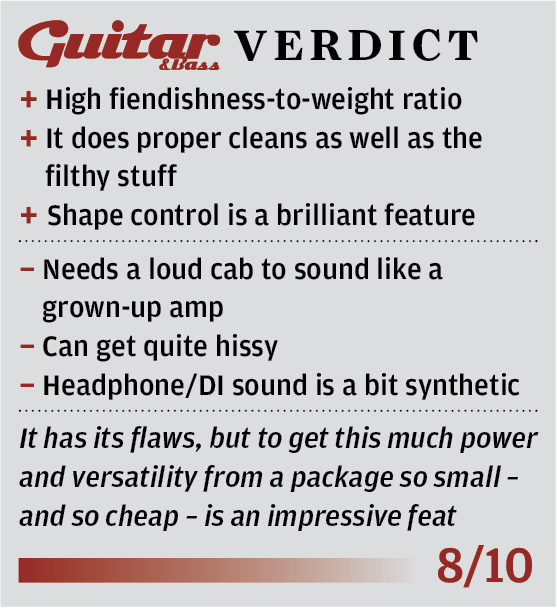