One of the world’s most distinctive amp brands turns its attention to building basses – and there’s a new bass combo to boot. Gareth Morgan takes both for a spin… 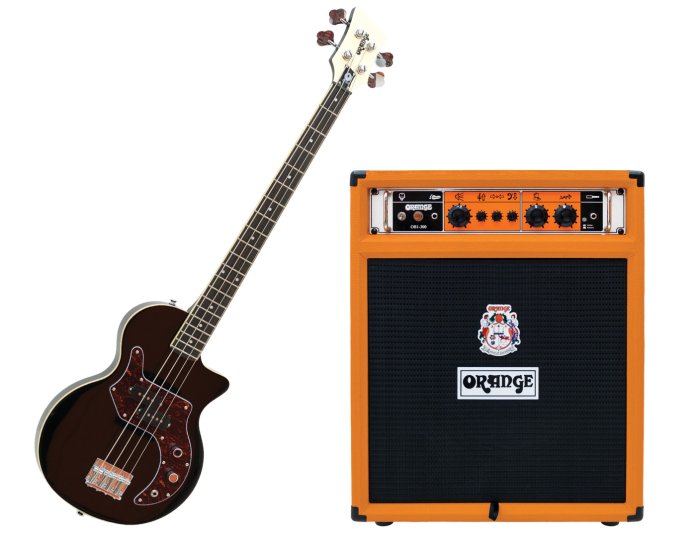 Orange, with its distinctive styling and eye-catching hue, has been providing top-notch amplifiers for the discerning guitarist and bass player since Cliff Cooper opened for business in London in 1968. Like many well-established brands, it suffered a fallow period in the 80s, only to find salvation in the re-emergence of rock ‘n’ roll in all its forms in the following decade.

In recent times, we’ve been treated to the Terror Bass amps (sadly discontinued), Orange Crush combo and, most recently, the rackmount OB series of heads and their associated cabs.

We reviewed the OB1-300 in our March 2015 issue and, being rather taken with its old-school leanings, were delighted to learn that Orange has now sought to expand this series with the release of a combo version. Its introduction also fills a gap for a loud, all-in-one unit in the company’s bass amp range.

First up, Orange has finally got round to unleashing a bass on the unsuspecting public. It is, without question, aimed at the rock ‘n’ roll fraternity, and it’s called the O Bass. Let’s take a look… 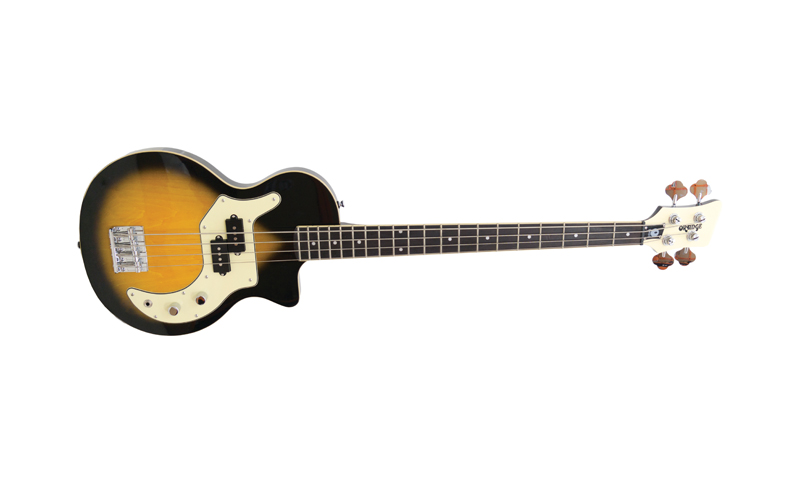 Made in China, the single-cutaway O Bass has a vibe similar to Hofner’s Club Bass, albeit the okouomè body is a solid chunk. You might be screaming `Les Paul’; but, wherever we go in comparison terms, we have to admit that its downsized form with cream binding, neatly bevelled edges and tortoiseshell scratchplate cuts a rather fine figure. The top is veneered with basswood, but this detail is obscured by the opaque Off Black finish that also coats its bolt-on maple neck and the back of the headstock.

The neck itself is a seriously comfortable, shallow `C’ contour that culminates in a cream-faced, distorted oblong headstock that’s back-angled for the requisite break angle at the black synthetic nut. Besides the Orange logo and eyeball model name on the truss rod access cover, it’s home to a set of traditional-looking open gear tuners with oversized cloverleaf buttons in two-a-side formation.

Bordered by more cream binding, the rosewood fingerboard bears 20 medium jumbo nickel frets with not a hint of overhang at the tang, and pearloid dot markers with a further set of black dots in the upper-binding strip. For the bridge, Orange has fitted a top-loading model reminiscent of the standard Fender offering, which means it looks a bit flimsy but does the job.

Given the rock ‘n’ roll vibe, you won’t be surprised to learn that the O Bass is electronically passive with a single Orange Custom-Wound split-coil pickup, and that the two knurled chrome controls are volume and tone.

It’s worth noting that Orange supplies an alternative scratchplate with each colour. For example, our review model arrived with a spare cream plate, which you can interchange with the tortoiseshell one to your heart’s content.

The pickup type and positioning, allied to the simple twin-control attack, suggests some form of P-Bass vibe in the tone department, and the O Bass refuses to disappoint. Wind the master tone to maximum treble and the reward is gritty and aggressive with a pleasing bottom-end thump.

The lower strings – the E especially – have plenty of purpose behind their snarl; add a midrange that’s well balanced and solid, and responds with snappy punch if you dig in a bit, and you’ve got a rock ‘n’ roll animal with distinct old-school leanings that the likes of Stax’s Duck Dunn would have enjoyed plying their trade on.

The treble response is well attenuated, even on full boost, so thinner strings speak clearly – but without being overly clanky or brittle. This means melodic grooving is rewarding and thinner strings have plenty of body but will cut through the densest guitar mire.

Winding back the tone control is fruitful: there are a number of distinct if subtle reductions in snarl and the resultant smoother tone opens up the O Bass to rootsier applications. The cool thing is that right up to just before full cut, it’s punchy enough for definition and forward groove-motion… and that’s simply dub-tastic! 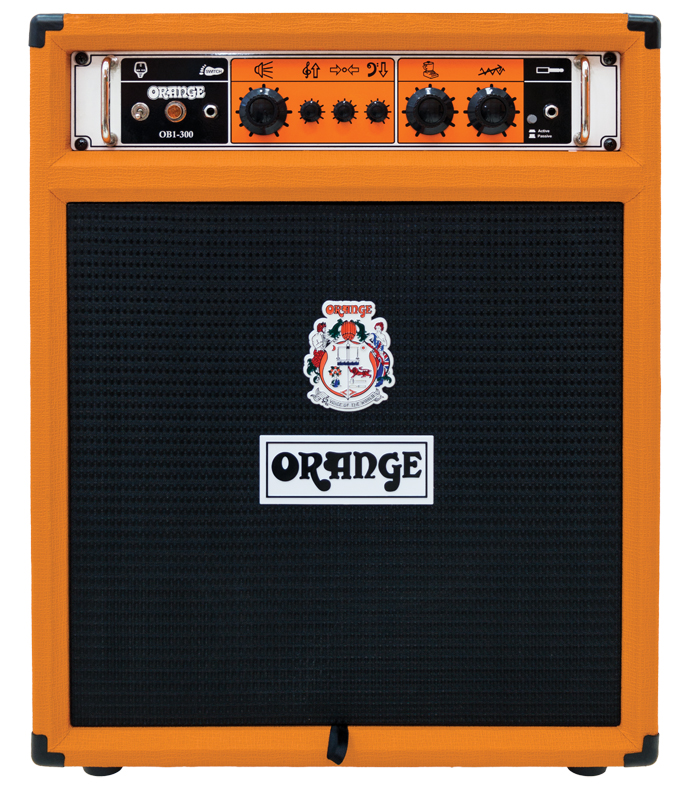 Dressed in the familiar mottled orange Tolex, the Chinese-made OB1-300 is a no-frills, basic rectangle which, taking into account the rubber feet it sits on and the black-finished steel corners that protect its extremities, measures 678mm high, 546mm wide and 352mm deep.

Whilst an undeniably chunky lump to cart around, marine birch ply construction helps to keep the weight down to 29.65kg (65lbs) and a pair of side-mounted recessed handles make it a reasonably portable proposition. Removing the badge-adorned black grille cloth reveals cylindrical porting provision and a single 15-inch Eminence neodymium driver.

There’s 300 watts of boom on offer from the amplifier section, which is basically the rackmount head slotted into the top of the cab. The control panel, with its white, black and orange sections, displays familiar quirky graphics above each black plastic control knob, the three smaller ones being a straightforward EQ section with bass (+/-15dB at 75Hz), middle (same cut, boost at 1kHz) and treble (+/-20dB at 5kHz). 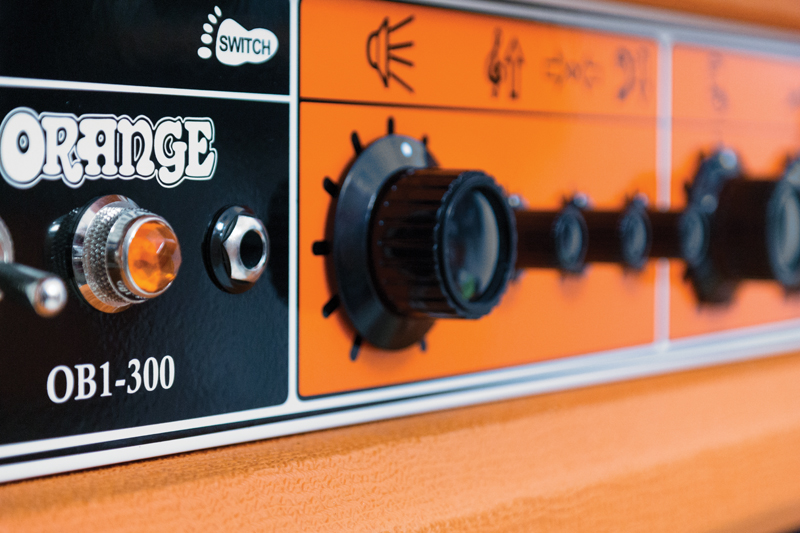 The three oversized controls feature volume and Orange’s handy blend feature and associated gain dial. On plugging in, your signal is sent to dual preamps – clean and overdriven – so set the amount of grit with the gain and dial in as much as you require via blend, or set it and kick in the mayhem via a footswitch (not supplied). It’s a concept that Orange says is inspired by the popular practice of bi-amping, without the stress of taking two separate rigs to a gig… which is nice.

As well as a balanced XLR output (with ground/lift switch), there’s a line out jack socket and additional speaker output in Speakon form.

We already know the OB1-300 head is a good piece of kit, and in combo form it works really well. There’s a pleasing richness to the sound, with decent growl to the lows, dark and punchy midrange and natural-sounding highs. Tweaking the EQ is fun: boost the bass three quarters for a fat, smooth rock tone, then dial in the middle halfway to unleash heavy, snarling impact.

Chopping the middle back by the same amount yields silky smooth, almost scooped mids; but there’s definition to the rumble, which starts to properly shake the room when you max out the bass dial. The lack of horn and a well thought out treble control means boosting here sharpens and shines your note without inducing excessive clicks and clanks, other than near to full boost, and there’s an earthy and gritty thumb tone to be had.

Essentially an `add distortion’ feature, the blend/gain function offers a good selection of nuanced mayhem. If you leave the gain at minimum, dialling blend to full induces subtle crunch and a level hike, but anything from a subtle rumble tracking your clean note to full-on noise is easy to unleash – although at the extremes your original signal is lost beneath the distorted over-blanket. Loads of fun… in fact, a bit too much! 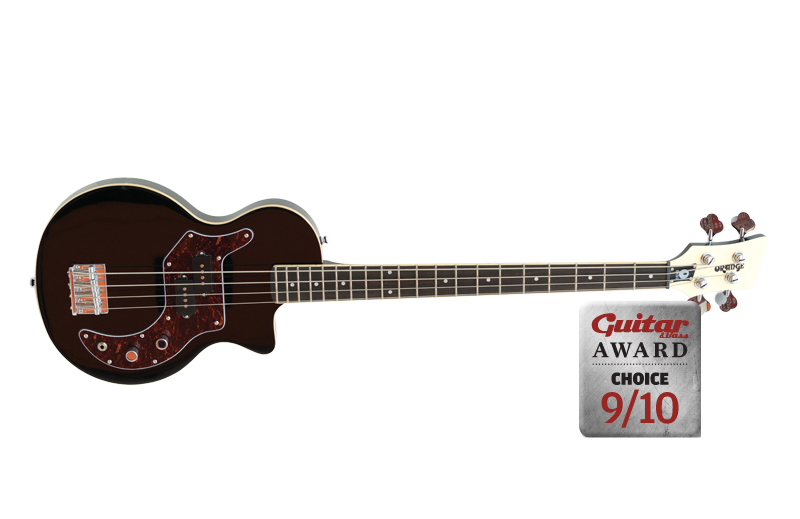 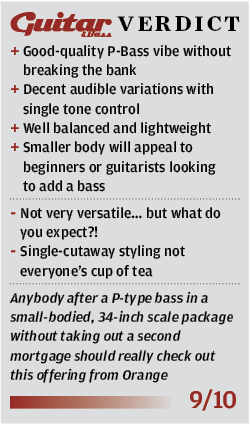 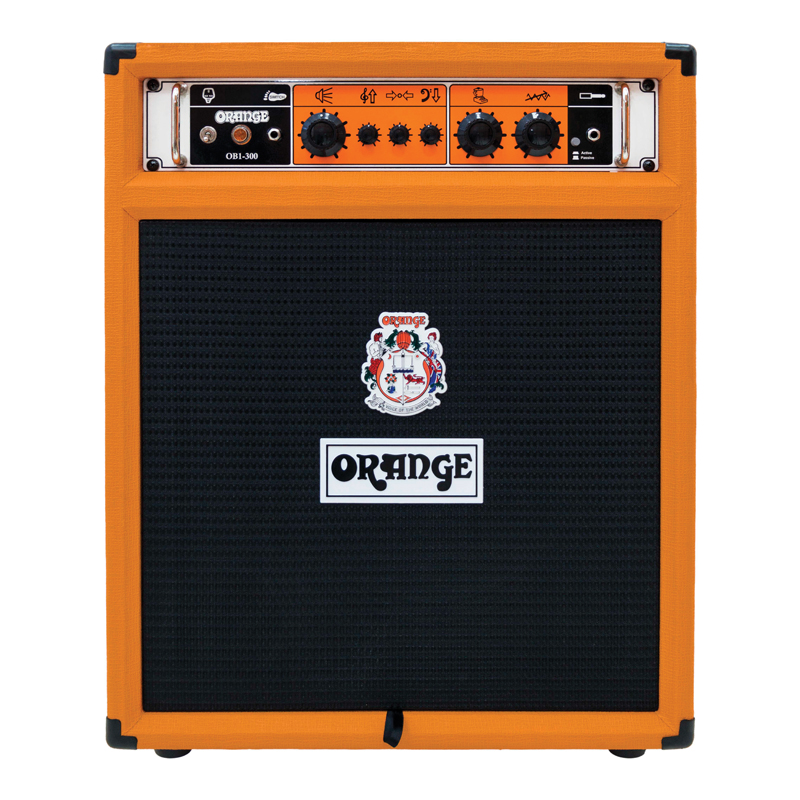 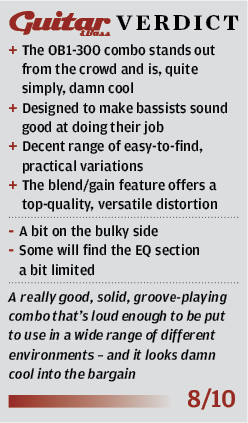