New for 2015, the all-analogue Orange rackmount bass amps let you blend cleanliness and filth to your heart’s content. Review by Gareth Morgan

Orange may have made their name back in the day with mighty valve heads, and the reissues are still mighty big today with bassists who Prefer To Rock (and, of course, guitarists, but they aren’t reading this page). However, they’ve also gained more than a bit of a name with their valve/switchmode bass amps, the lunchbox-style Terror Bass series.

There’s also a third, alternative route, though, which Orange is keen to continue to explore, despite the popularity both of very old technology and the onset of new lightweight technology – the old-school transistor-based head… powerful, weighty, reliable and yet still fairly affordable.

Just released at Winter NAMM 2015, the OB1-300 (and its yet more potent brother the OB1-500) comes rack-ready with U-shaped carry handles on the front. It’s delivered in a white powder-coated steel chassis that should withstand the rigours of the road. At 9.54kg/21lbs, its solid-state nature makes the OB1 heavy by modern digital standards but, in truth, easily portable.

Controls are on the front panel, seated in the only expanse of orange finish on the unit. Either side, framed in black, you’ll find an On/Off switch with orange LED and a jack for the footswitch (not supplied), and the input socket with Active/Passive switch.

Each control is labelled with Orange’s familiar road sign-inspired symbols, the bigger black dials being Volume, Gain and Blend (with a most amusing ‘food blender’ symbol), the latter being an additional controllable gain circuit designed to simulate certain elements that normally only bi-amping achieves, from clean boost to filthy grind. With the active EQ, +/- 15dB is available from Middle and Bass, whilst +/- 20dB is avaiable from Treble.
On the back panel you’ll find two speaker out Speakon sockets, a line out jack socket plus an XLR balanced DI out with ground/lift switch. 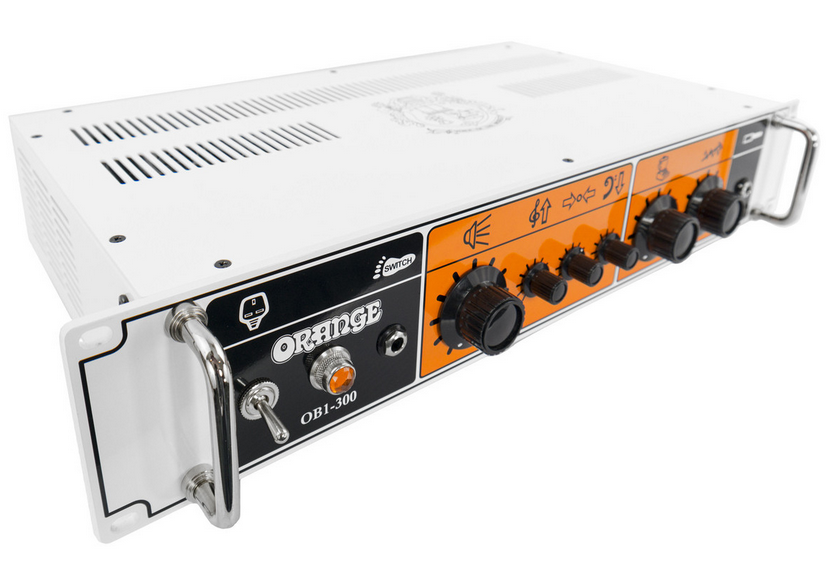 Sounds
The OB1’s solid-state nature means the basic sound is clean and clear with decent width and plenty of low-mid kick. Boosting Bass gives results that are powerful without being excessive, adding a rich thickness to proceedings while still letting clarity breath.

The middle control is all about delivering punch and impact with a distinctly dark character, betraying the OB1’s rockier leanings in the process, which gets thinner and spikier on higher boost levels, full boost being really aggressive and loads of fun. The Treble dial adds sheen and spike, although its very snappy nature can be mellowed usefully by chopping back the Middle dial a little.

The blend/bi-amp idea is based on the currently hip practice of bassists using both bass and guitar amps to run clean and dirty signals, and the whole point about the OB1 amps is that they offer this facility in one package. The control by itself, in conjunction with Gain, accesses effectively the OB1’s line-drive capability.

With Gain set low, you get an excellent clean volume boost – it’s possibly a touch spikier, but pretty good nonetheless. Dial in more Gain and overdrive creeps in, only really subtly blendable with clean signal before it becomes the overriding tonal factor. The distortion sounds are very decent – fiery’n’nasty, with oodles of raspy grind.

Verdict
The OB1-300 is a fine amp, not massively endowed with tonal variation but delivering excellent fundamentals without fuss via its simple EQ. If the idea of the bi-amp function appeals, we’d suggest purchasing an appropriate footswitch (Orange do one for £27.99) as the ability to stomp your blend setting in and out at will massively increases the amp’s usefulness and worth.

Although very much a rock amp, anyone with old-school guitar-band leanings would be happy to have one of these sitting atop their stack 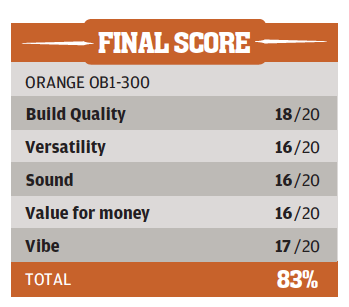