This 100-watt stack recalls an era of roadies and huge flares, but it’s not just about the overdrive sound. 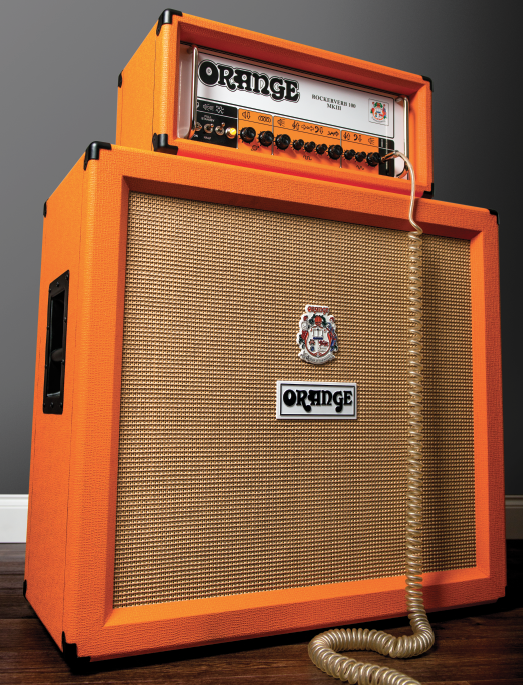 The 100 MkIII sits at the top of the power structure in the third incarnation of Orange’s Rockerverb series. Although changes have been made for the MkIIIs, some have brought the new amps closer to the earliest versions. For instance, the clean channel has only treble and bass controls, and the design has remained true to the original gain structure for the dirty channel.

These changes have been made in response to several years of customer feedback. Particular attention has been paid to re-voicing the clean channel for more clean headroom and extended treble response. The valve-driven spring reverb has been tweaked, too, with a level control that allows more precise adjustment, and brighter tails to keep them distinct from the dry signal.

Orange has also beefed up the power supply, and the multi-connectors have been replaced by hand-soldered wiring. Multi-turn bias adjusters are provided for each power valve tube, which makes re-biasing straightforward for any qualified tech. Rebiasing also allows you to replace the stock EL34 tubes with 6L6s, or you can use two of each.

Besides the integrated attenuator, there are two ways to adjust the output power. As they operate independently, there are four possible settings. Method one is a full/half-power switch on the front panel that drops the plate voltage of the power valves by 100v. The power valves draw more current, bringing the operation closer to Class A. 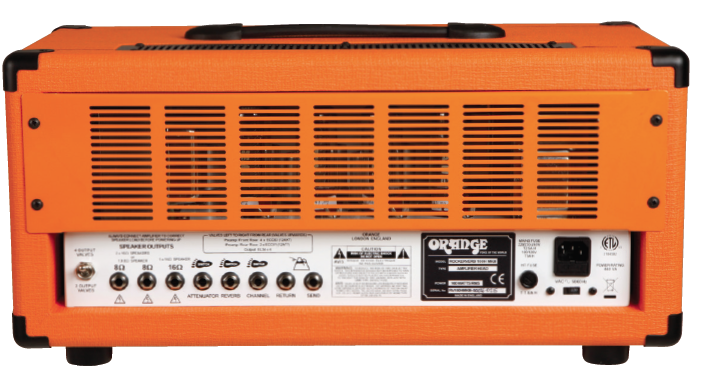 Method two utilises a switch on the back that deselects two power valves and adjusts output impedance so the three speaker outputs remain the same. The power switch gives you 100-watt and 70-watt, or 50-watt and 30-watt settings, depending on how many power valves are active. Beneath the attenuator and reverb controls is a planet symbol to indicate that they act `globally’ on both channels.

Orange has taken a distinctive approach to attenuation in order to maintain the interactive relationship between the power valves, transformer and speakers. Put simply, the attenuator comes after the preamp and determines the clipping point of the power valves.

In Use
The head was supplied with a closed-back cabinet containing four Celestion Vintage 30 12-inch speakers. With closed-back cabs, the sound tends to differ depending on your proximity to the speakers, and you really need to stand about 10 feet away to get a clear sense of what’s going on.

I was interested in comparing the basic voicing of the two channels, so I centred all the tone controls, put the clean channel at its breakup point then maxed out the dirty channel’s volume and adjusted its gain for an equivalent level. 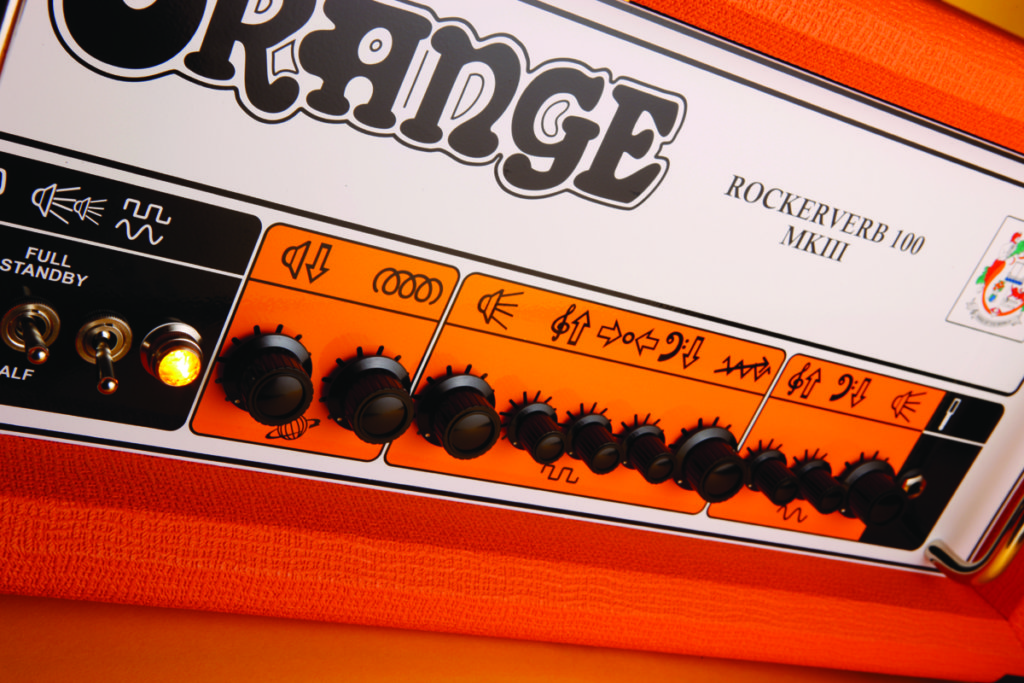 The clean channel sounds like a big old Fender amp, but beefier. It has an uncompressed and dynamic quality with plenty of clarity, and a slightly scooped midrange accompanies the bumped-up bass and treble. The dirty channel sounds more compressed, thicker in the middle, lighter in the bass and a tad more aggressive in the upper mids.

With single coils, the clean channel stays clean until the volume passes halfway, when a gently compressed overdrive eases in. This channel is no afterthought. The tone controls are so powerful you can dial in a huge range of sounds with pretty much any guitar. Cranked up, it can dish out a creamy, harmonically loaded, old-school rock tone, and you can control the level with the unusually transparent attenuator. 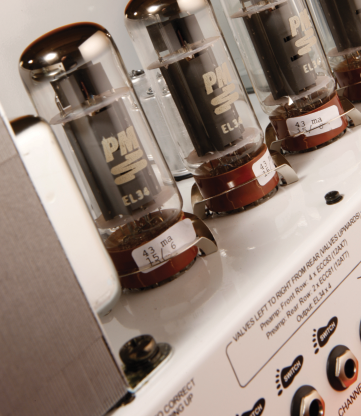 The dirty channel is similarly versatile. Up to the halfway point, the gain control increases overdrive gradually. Around one o’clock, the overdrive begins morphing into distortion and by three o’clock the sound can be described as high-gain.

You can negate any fizziness by cranking up the volume and allowing the power tubes to thicken and round out the tone. Naturally, things can get loud, but the attenuator can handle that. Powerchords crunch and punch, and the Rockerverb 100 can sustain single notes almost indefinitely, even before you reach high-gain mode.

The term `beefed-up power supply’ may ring alarm bells for incorrigible tweed tone enthusiasts, but any concerns are misplaced. The 100 MkIII is not one of those high-power amps with stiff and spiky transients. Instead, you just get well-controlled lows with properly defined pick attack.

Half Power
The sonic characteristics of both channels are retained in half-power mode, impacting on the sound only as its pushed into overdrive. Half power softens the treble and slows the transient response of the clean channel subtly, and while the dirty channel loses a bit of slam, the compression becomes more responsive to playing touch.

I wouldn’t consider power switching in terms of level control. It’s more about altering touch dynamics and texture, and expanding on the 100 MkIII’s versatility. Halving the output power by switching off two power valves does not produce a dramatic volume drop. Instead, you lose a bit of upper-harmonic sheen and bite, but it increases the touchy-feely relationship between the amp and speakers.

Level control reverts to the attenuator, which can ease things from a window-rattling 100 watts to silence. You can even disengage the attenuator with a footswitch, effectively turning it into a boost feature for both channels.

While I enjoyed the tone of the reverb on the clean channel, I wouldn’t use it with high gain. Although the reverb is footswitchable, its status doesn’t change when you switch channels, and the 100 MkIII might benefit from a dirty channel defeat switch. Generic footswitches can be used for the reverb, attenuator and channel hopping, but Orange should perhaps supply one given the cost of the amp.

The Rockerverb 100 MkIII is a fire-breathing 100-watt rock and metal head, but it does a good impression of a spongy mid-powered boutique amp. With a touch of breathy spring reverb, the clean channel is capable of bluesy, Fender-like cleans and even Vox-y chime. What’s more, it can do all of the above at any volume, with no extraneous noise. Plus, if you don’t like the colour, it comes in black, too. 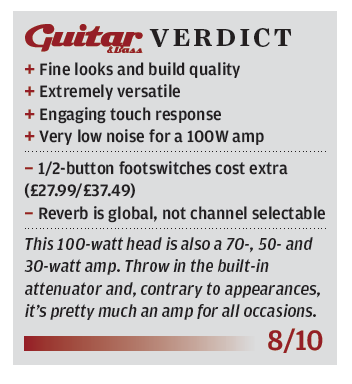