Looking for the ultimate delay pedal? This just might be your new best friend… 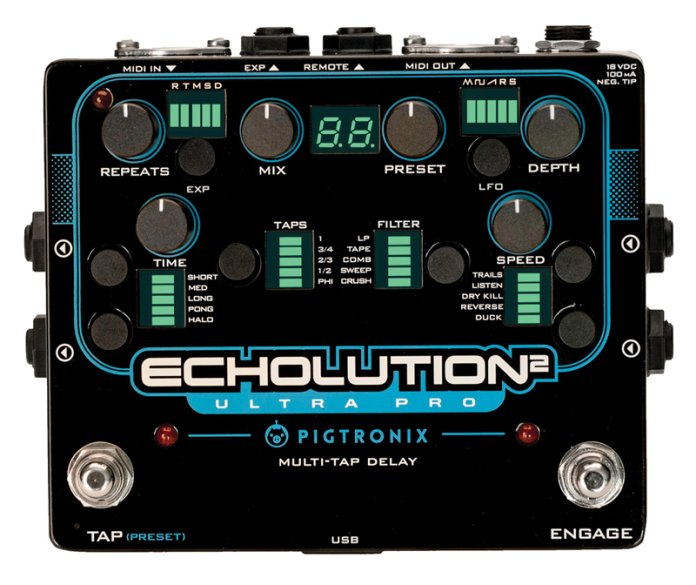 Once you’ve swallowed the manual and navigated your way past the slightly scary exterior (six knobs, eight buttons, two footswitches, six banks of multi-segment LEDs, MIDI In/Out and a USB port), the Echolution 2 Ultra Pro proves to be a genuinely awesome tool for manipulating and modulating delays.

As a stereo unit,  it can work comfortably in concert with stereo effects or a dual-amp setup. If you’re a home recording fan, the combination of sound quality, flexibility and parameter control makes it a great ally. The unit comes loaded with 60 presets to help you explore its potential, and these can be edited and stored. There’s also an expression pedal socket, to which you can map any parameter for live control, and every function can be controlled via MIDI. If you want to engage with a computer interface there’s a free Mac/PC editor. There’s also an additional E2 remote switch that adds extra functionality in the form of Jump (modulates the delay by an octave when you press the switch) and Freeze (looper) modes.

This is a dual multi-tap delay pedal and you can create smooth pitch change effects by altering the delay time. There are four filters: low pass, tape, comb and sweep. Any of the first three can be combined with the sweep filter, and this is modulated by the LFO. There are four LFO waveforms to choose from: sine, square, saw and sample and hold. Any of the filter settings can be run through a bit crusher filter to create distortion and degradation. The delay line can also be turned off to allow the modulation, pitch shifting and filter to be used independently.

There’s so much potential here for manipulating and modulating that it’s hard to know when to stop tweaking. The interface is surprisingly intuitive given its complexity. The 24-bit sound is impossible to fault and there are a whole range of advanced boot options for enabling MIDI clock in, a 6dB boost, non-pitched MIDI tracking, stereo output phase inversion and more. The Echolution 2 Ultra Pro is more than capable of creating basic, vintage-style echoes and long delays (10ms-10s). It is, though, very expensive, even when compared to some of the big hitters in the delay market, although a quick online search will find street prices far lower than full retail. 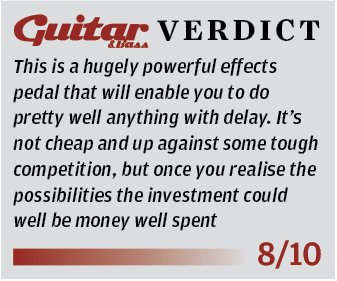