Loopers have been around for a good while, but the new Pigtronix Infinity feels like it takes things to a whole new level. Review by Marcus Leadley 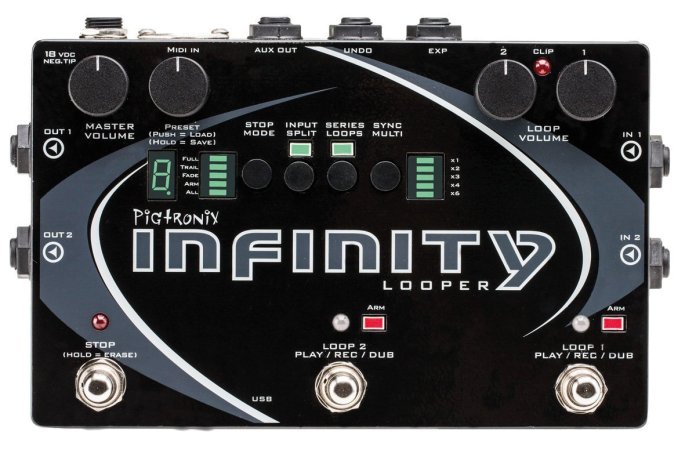 The Infinity looper is a deceptively simple-looking bit of kit; it actually comes with a 52-page manual. Dedicated loopers have been with us since the early 2000s, but the Infinity feels like a new-generation machine. It’s got 48kHz/24-bit sound quality and delivers two independent loops with serial or parallel modes, so you can get adventurous with advanced layering.

It can be a mono or stereo input/output device, or you can configure it to take different sources (say, a guitar and a bass), record them to different loops, and output them separately. You can undo and redo overdubs, and record dual-loop content to 50 preset locations. An internal 8GB micro SD card delivers around two hours of recording; the card’s not designed to be interchangeable, but audio can be moved via USB to a Mac or PC using the pre-installed Infinity Looper Application, which also allows you to update the unit’s firmware.

The Infinity’s controls are clearly labelled and it looks a lot more ‘serious’ than most Pigtronix units. Many of the knobs and switches are multi-function, so you’ll need that hefty manual, but it only took us about 10 minutes to get the hang of the basics. The use of physical knobs for Master Volume and Loop level is sensible as it lets you set up the balance intuitively. The unit fires up with Loop 1 armed, so you’re ready to record and layer sound instantly. Recording will start if you press the Loop 1 switch; press it again to start playback, then press it again during playback to start overdubbing.

The Loop 2 switch works in the same way, but you need to arm this manually, which means pressing it twice to start recording. There is a kind of choreography to learn and it takes a while to become fluid, but you’re helped by red, green and orange LEDs for the different play, record and overdub modes. Once you have a recording, simply select a preset number, press and hold until the display flashes, and hey presto – that’s your first new loop/track/riff recorded.

The most important thing is that the Infinity sounds great, with no appreciable difference between your live sound and the recording. Once you’ve got the basics sorted, it’s time to experiment. The Sync-Multi feature is very useful; it lets you link loops 1 and 2 together, but without limiting the performance to the length of the initial loop. The second loop can be created in multiples between 1 – 6 times.

Loop Aging is a cool feature that allows you to set up the pedal to allow loops to gradually fade out as new ideas come forward. This can be controlled via an expression pedal, so looping isn’t tied to an essentially repetitive, cyclic mode of operation. Unlike some loopers there’s no tempo guide (though the display does blink to indicate the beginning of the loop) nor click to play, but this isn’t really necessary as the unit has a MIDI input so it can be controlled by, and run against, an external sequencer, so you can clock it in time with a track or a beat source if necessary.

Indeed, many of the Infinity’s functions can be controlled by MIDI. To make full use of the features you need the £60 Dual Remote, which puts the undo/redo function and reverse loop mode at your feet.

A good looper can turn you into a very effective solo artist/improviser, and the Infinity’s MIDI sync capability means instant live integration for any group using a computer/sequencer. The low latency, high-fidelity nature of the unit means it can also become part of a very effective home recording system – and releasing guitar multi-tracking from the computer environment can feel extremely liberating.

The Infinity isn’t cheap but it sounds great, offers an extensive range of features, and is a very flexible and musical tool. 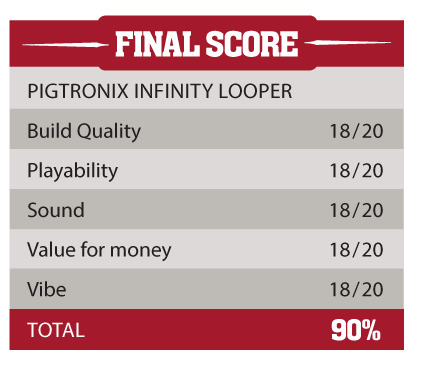