The Fender Custom Shop’s Postmodern Series cherry picks features from six decades of the company’s heritage. We check out a pair of electrics with vintage looks and modern, player-friendly features… 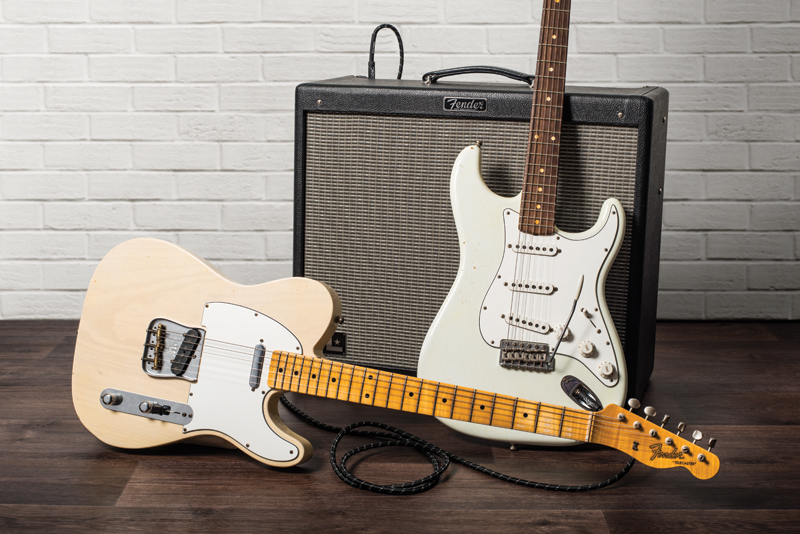 It’s now two decades since the Fender Custom Shop unleashed its first production Relics onto the market at the 1995 NAMM show, in the shape of a ’51 Nocaster and ’56 Mary Kaye Strat. Though artificial ageing continues to polarise opinion, it has undeniably been big business over the last 20 years, both for Fender and the numerous other companies who now offer anything from mildly dulled finishes to full-on `tossed into the back of a pickup truck every night for 30 years, and some nights it fell out of the truck’ levels of faux distress.

The very idea that Fender is celebrating the 20th anniversary of the launch of brand new guitars made to look like beaten-up old ones is another example of pop culture eating itself. It’s fitting, therefore, that the Winter NAMM show in January saw the Fender Custom Shop, now with Mike Lewis at the helm, debut a new type of artificially-aged finish – the Journeyman Relic – on the also-new-for-2015 and aptly-named Postmodern Series Strat and Telecaster. 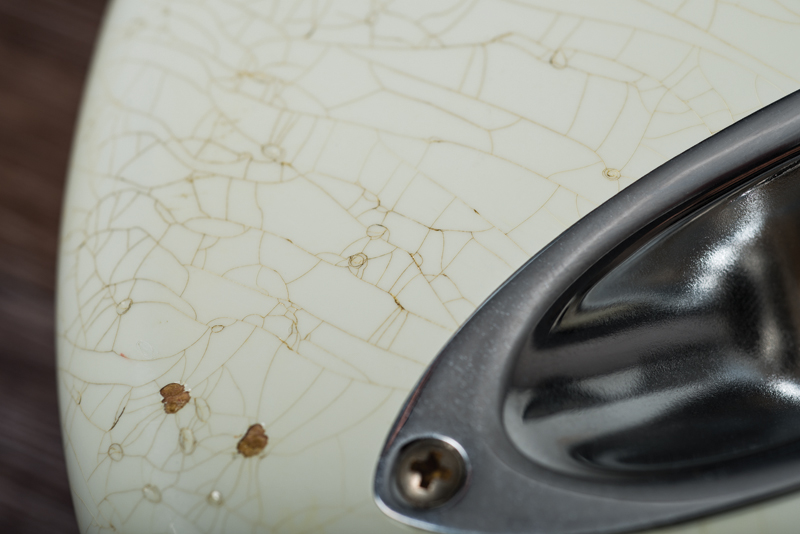 Positioned between the existing Closet Classic and Relic finishes, `used but not abused’ seems to be the preferred description of the Journeyman Relic finish. To our eyes and fingers, this is some of Fender’s most authentic relic’ing yet, certainly at the body end where the checked, yellowed and lightly dinged thin nitrocellulose finishes really look the part.

The yellowing of the Olympic White finish lends the Strat an almost minty hue in a certain light, while the Telecaster’s creamier Aged White Blonde has less visually dramatic crazing and allows more of the ash grain to show through. We like the restraint around the back of the neck; most of the lacquer remains intact on both instruments, and more often than not this is the case with genuine vintage guitars that we encounter. Necks that are worn right down to the wood are few and far between on the vintage market, but we’re getting ahead of ourselves. 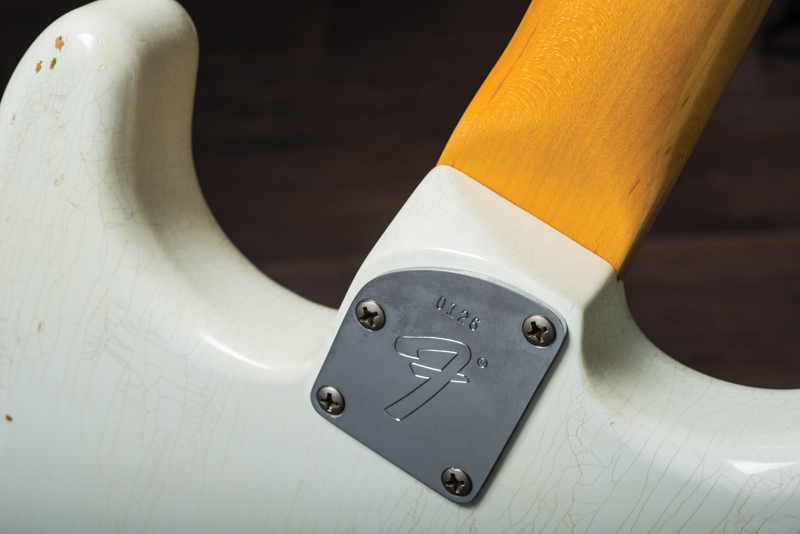 The idea behind the Postmodern Series is that it represents a magpie-like swoop through the Fender catalogue over the decades, picking up a subjective idea of the best bits along the way and combining them into the era-splicing Stratocaster and Telecaster models you see here.

The range is rounded out by a Precision body/Jazz neck hybrid Postmodern Bass design (£2,739 for the Journeyman Relic), and all three instruments are also available with NOS nitrocellulose finishes (£2,489 for the guitars, £2,579 for the bass) if you fancy adding the dings yourself over time. We were hoping to get our hands on the bass as well as part of this review, but at the time of writing there was only one example in the UK, and it had already been swiped by a famous artist. 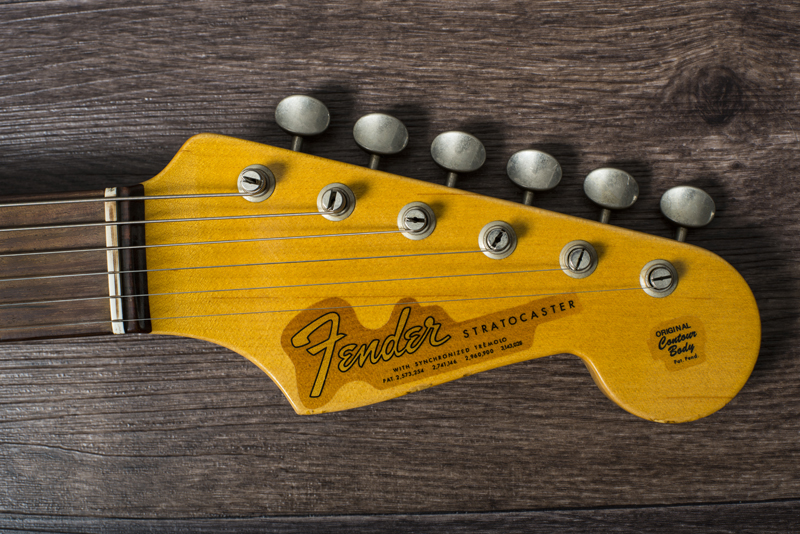 While the transition-era headstock logos and rather stark three-ply scratchplates scream 1965, both the Strat and Telecaster feature ash bodies for an injection of early-50s flavour. The neck shapes and round-laminate ‘boards, too, are very mid-60s, but the most radical departure from vintage templates is at the bolt-on neck joint; both guitars feature heels that are softened on the treble side to provide more comfortable access to higher registers. In combination with 241-305mm (9.5-12-inch) compound radius fingerboards, this makes for a much easier and more refined, boutique-like feel than the squared-off heel and 7.25-inch radius of old.

There are plenty of players for whom the fight of a more rounded ‘board in combination with a heavy string gauge and medium action is all part of the Fender experience; but for those of us who are less inclined towards self-flagellation, but still want a vintage aesthetic, the kind of subtle, player-friendly design tweaks here mean that the untrained eye in the audience will simply see and hear a great-looking vintage-style Strat or Tele.

The Strat’s ash body features relatively dramatic, figure-hugging contouring, while staggered tuner posts negate the need for a string tree and reduce friction in combination with vibrato use. From the factory, the Synchronized vibrato is set up with three springs and just over a semitone’s pull-up on the low E, just under a semitone on the high E and a whole tone on the G string. If this set-up isn’t to your tastes, fear not; alongside the certificate of authenticity, owner’s manual, cable, plectrums and strap, amongst the candy in the black vinyl hard shell case you also get a bridge cover, a smart (and extremely bloody useful) CruzTools toolkit and two extra vibrato springs. 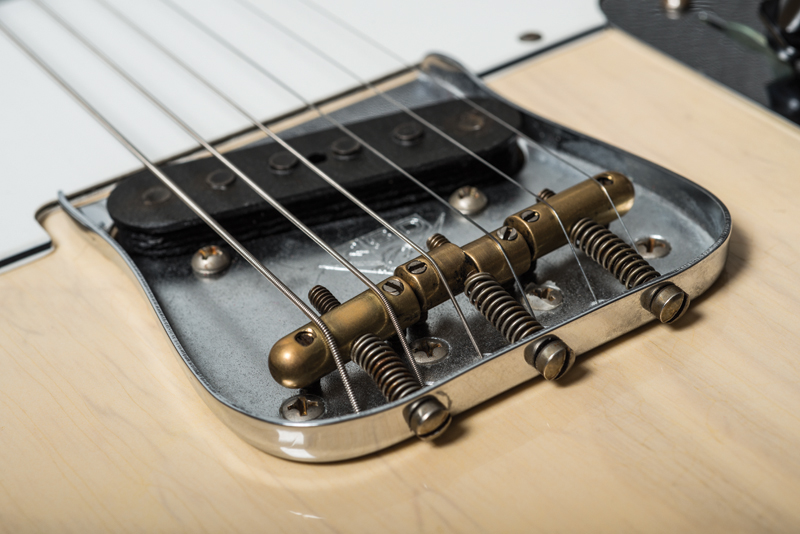 There’s no bridge cover or spare springs for the Postmodern Telecaster, of course, though the shape of its hardtail bridge is based on the vintage `ashtray’ cover outline. First introduced in 2013, the Tele’s RSD bridge features a lower-profile tray than the classic Tele design. It’s more comfortable in contact with the right hand and the trio of brass saddles (angled on the E/A and B/E combinations, while the middle saddle beneath the D/G strings looks split, it’s actually machined from one piece of brass) provides more precise control over intonation in combination with a modern set of strings, but still imparts an early-50s character to the overall tonality. Many vintage Fender fans can be a little nervous of any hardware that doesn’t follow the original lines, but the RSD bridge is both a visual and sonic reference to Fender’s past that offers robust performance in the present.

7-7.5lbs is a good medium-light weight for a Fender solidbody and, though the Tele is a little heavier than the Strat, it’s certainly not excessively so; both guitars feel great when strapped on. Each instrument is acoustically very alive and resonant before we even plug in. So far, so very good. 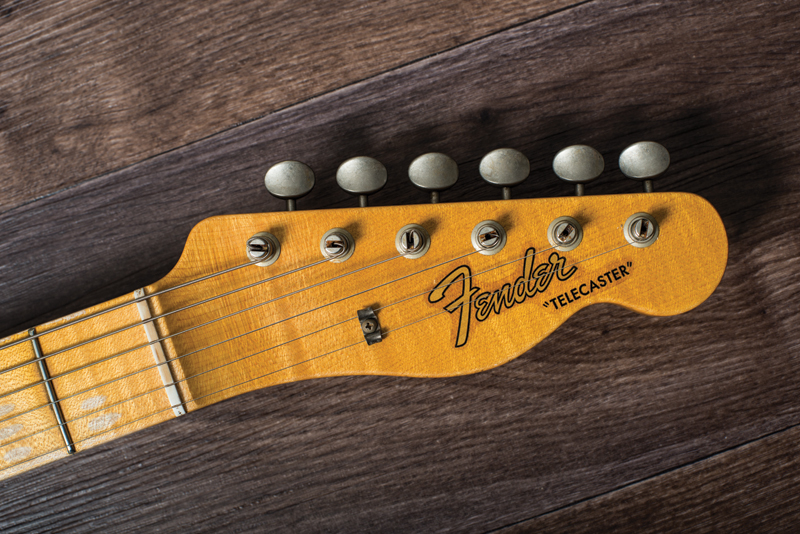 As hinted at earlier, both neck shapes are faithful to their mid-60s Oval C billing; it’s interesting that while the Strat’s neck is only approximately 1.5mm deeper at the 12th fret, it does seem more rounded overall than the Tele, which has a flatter feel in the palm. Like many of the genuine mid-60s Fenders we’ve encountered, both neck shapes have a non-linear taper; slim behind the nut, the profile of the carve fattens out quickly between the second and fifth fret.

If you aren’t familiar with what we mean, it’s a very similar shape to the current American Vintage ’65 Stratocaster reissue, although the 7.25-inch fingerboard radius on that more vintage-faithful model makes for a slightly more old-school feel than either of the guitars here, with their compound radii. When experienced as a whole, the combination of conical radius ‘board, heel contouring and relatively tall narrow jumbo fretwire on the Postmodern guitars makes big, high-register bends much less painful to execute than back in ’65.

As with any factory-aged instrument, how these guitars look is only part of the story. The Journeyman relic’ing has a more subtle effect on the playing experience than a Heavy Relic treatment with exaggerated forearm wear and an abundance of exposed timber at the back of the neck. Here, `playing’ wear on the neck is limited to thin strips of exposed wood around the fingerboard edge, up to the third fret on the bass side and the fifth on the treble side, but there’s still a `comfortable shoes’ vibe straight out of the case.

Swapping between these guitars with an otherwise identical amp and pedal set-up is revealing, and once again draws us into the Strat versus Tele debate that’s now more than six decades old.

The Strat feels like the more cerebral choice; into spring reverb with a Klon Centaur-style boost pushing a 6V6 power stage, single-note, bridge-pickup lead lines sing with harmonic overtones, while the neck and middle pickups ring out beautifully in combination with rich clean chord voicings. Dig in harder and there’s bags of throaty, percussive twang with plenty of pop and snap; it’s a seriously dynamic instrument and a very classic-sounding Strat in all five switch positions.

Fat `60s pickups or not, this feels more like a Strat for Nowhere Man and Blood Sugar Sex Magik than it does for heavier, thicker blues-rock styles, though the stability of the vibrato does allow you to let your inner Jimi take over the whammy bar without proceedings descending into a hopelessly out-of-tune mess.

The Telecaster, on the other hand, is the bad cop and the barely-restrained animal of the pair; where stacking another mild overdrive on top finds the Strat’s bridge pickup sounding a little grainy even when its dedicated tone control is knocked back, the Tele’s extra snarl and midrange push wins out. You just want to hit this thing hard; add some subtle slapback and a Bo Diddley beat and it’s rock ‘n’ roll in excelsis.

As usual when we play a Custom Shop Telecaster, the ballsy bridge pickup is so much fun that we almost have to force ourselves to explore the other pickup positions, but there are big, soulful voices there, too, that excel for playing everything from swampy blues to cleaner R&B and soul chord-comping. Here, in its `Twisted’ incarnation, this Custom Shop Tele neck pickup’s performance is a little bit more springy and Strat-like, too.

Ultimately, whether you prefer the Postmodern Strat or Tele will  probably boil down to a hardwired, long-established preference for one or the other model, but if you are predominantly a Strat player who fancies a dalliance with a raunchy early 50s-style Telecaster bridge pickup tone without the sometimes-intimidating, beefy Nocaster neck shape that traditionally accompanies it, this could be a giant step on your road to Tele-addiction. The Postmodern Tele’s neck may be 60s-inspired with the convenience of a compound fingerboard radius; but,  sonically, this is a guitar that wants to wear a black guard and no mistake.

The Strat, on the other hand, is unlikely to tempt fully paid-up Tele lovers to switch their allegiance; it’s simply a very well made, thoughtfully spec’d Strat with mid-60s cosmetics and a handful of stealthy nods to modernity that help make the whole playing experience a more comfortable ride.

Indeed, it might only be when you put either of these guitars down and revert to a more traditionally spec’d Fender solidbody that you appreciate just how comfortable that ride is. 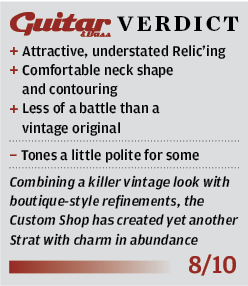 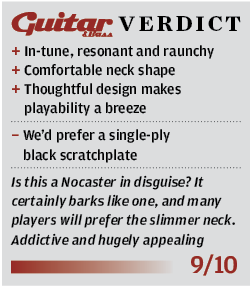 Get them while they’re hot

The Fender Custom Shop has unleashed some highly collectible and thoroughly desirable limited edition models for 2015. Here’s a rundown of the Stratocaster and Telecaster models…

This ‘Tone Horse’ Tele is the latest evolution of the Cabronita and features a TV Jones Classic neck pickup, a hand-wound Texas Special bridge pickup, Sperzel tuners with pearl buttons and an RSD bridge. We like it a lot.

The Esquire is a way more versatile instrument than appearances might suggest, but if you desperately need a neck pickup, this example comes with a conversion kit including a neck pickup, pickguard and control assembly.

20 years since the Relic phenomenon began, Fender celebrates with a limited run of 95 ’51 Nocasters.

A huge neck, enormous frets and punchy new pickups make for a fiery and toneful combination. This is our pick of the bunch from the Custom Shop’s class of 2015; it’s a real tone monster!

Another nod to the class of ’95 as Fender recreates the ’56 Mary Kaye Strat that appeared alongside the Nocaster.

1955 wasn’t exactly a bad year for music and, 60 years on, the ’55 Stratocaster still looks amazingly contemporary. There’s a choice of Dirty White Blonde and Two-Colour Sunburst finishes and a trio of hand-wound pickups.