Paul Reed Smith’s name is on all of his guitars, but this one combines his favourite features. 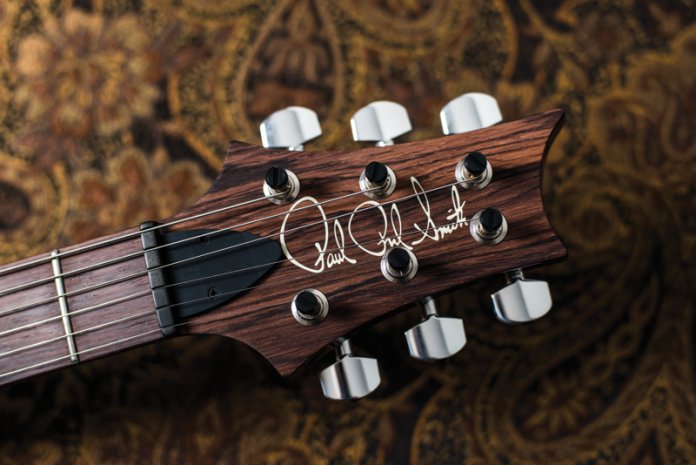 It’s 30 years since a young Paul Reed Smith took 20 guitars to The NAMM Show and announced the arrival of a new brand that would force the big American guitar companies to up their game. Informed by a decade of repairing vintage instruments and building guitars for the likes of Carlos Santana and Howard Leese, the `NAMM 20′ guitars set the bar high, but that didn’t stop Smith spending the next three decades in constant pursuit of innovation and refinement.

Back in 2015, we’re confronted by Paul’s Guitar: the production version of the very instrument played by the boss himself. PRS’s stateside national sales manager, Jim Cullen, explains how the model came to make its way into the company’s Core Line: “The Paul’s Guitar was inspired by the Private Stock signature model, which was a 100-piece run released at Winter NAMM 2011. Based on the popularity of the signature run, we released a 200-piece signature model limited run in the Core Line at Winter NAMM 2012. It was then followed up with the 408 Standard and 408 Maple Top, introduced at the PRS Experience in September 2012.”

“Paul began experimenting with winds on the narrow bass pickup in the 408, combined with the signature model electronics configuration (volume, tone, three-way toggle and two mini-toggle coil-tap switches) because he was looking for a way to cut through the mix a little more in his now larger band. He found that the narrower magnetic field of the 408N bass pickup, wound hotter and placed in the treble position, gave him the extra clarity he was looking for.” 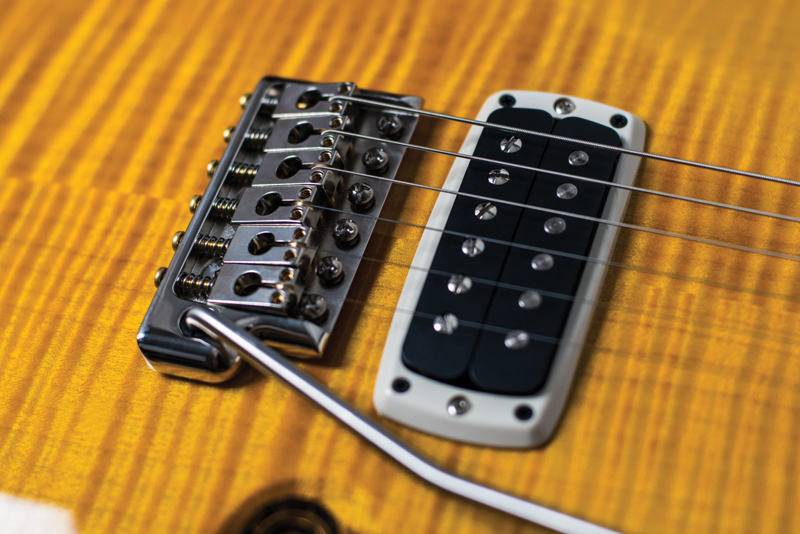 “So, at Winter NAMM 2013, the Paul’s Guitar was launched in two versions: a Private Stock Limited and an aesthetically `stripped down’ version in the Core Line, spec’d out with `dirty’ artist grade tops.”

The current Core Line Paul’s Guitar shares many of the features of the 2013-14 model, but there are a handful of differences. Phase III locking tuners replace the previous Low Mass units, while instead of a `dirty’ artist grade top, there’s now a flame maple top as standard, with a 10-Top or quilt maple available for an extra £499. In addition, you can choose between vibrato or hardtail models for no extra cost, while the Artist Package starts at £4,059. 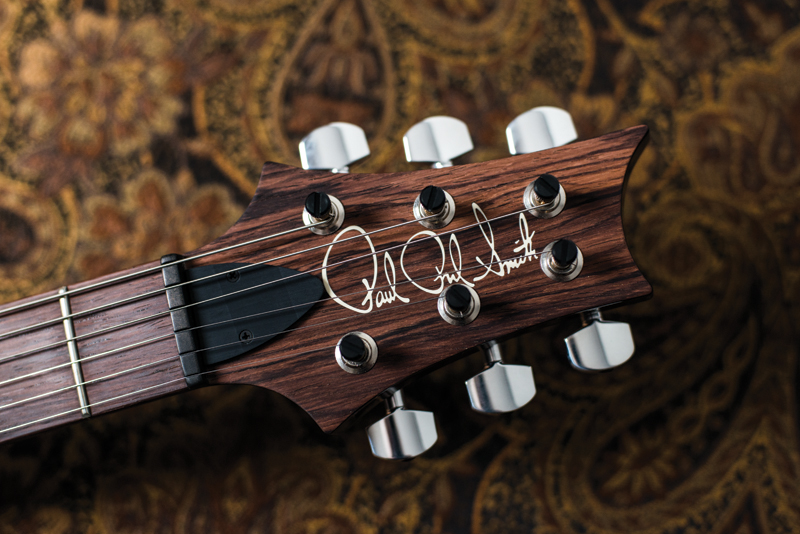 The Honduran rosewood headstock fascia, enlarged logo and `brushstroke’ bird inlays elevate Paul’s Guitar above the norm, while the two-piece flamed maple top is finished flawlessly in Faded Vintage Yellow – harking back to one of the most striking original colour offerings from the class of ’85. Like the Vela we reviewed recently, the only visual flaw we can detect on very close inspection is the presence of what appears to be white buffing compound residue – likely used in he fret polishing process – on some areas of the rosewood fretboard. It’s no deal breaker, though, and as befits an instrument of twice the price of the S2 model, the ‘board itself is of Honduran rosewood that’s more attractive and exotic in appearance than the rosewood of unspecified origin on its stablemate.

As Cullen says, the narrow 408N Bass neck pickup is the same unit that debuted a few years ago on the 408; unlike the larger bridge pickup on the 408, the 408N Treble bridge pickup has the same footprint as the neck pickup and is simply wound with a few extra turns. Both pickups can be coil split individually via the pair of mini toggle switches between the volume and tone controls. Clever wiring minimises volume loss in single-coil mode: each switch disconnects the screw coil and adds 1,500 turns to the slug coil.

Removed from its luxurious paisley hardcase and played acoustically, despite – or perhaps because of – its PRS Tremolo vibrato bridge, Paul’s Guitar rings and resonates like a hardtail. The bridge arrives set from the factory with four springs attached and a tone’s upward travel on the E, A, D and G strings, and a semitone on the B and E ± it’s such a stable and smooth set-up that we’d be loath to change it. 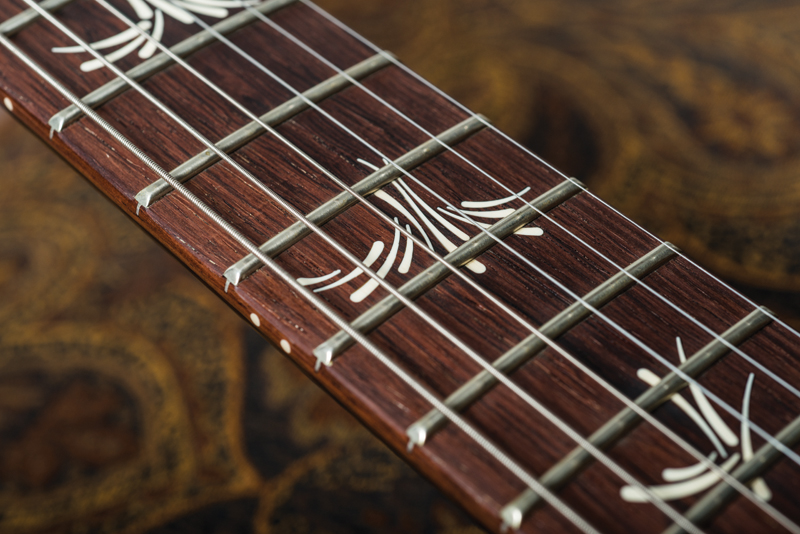 At 8lbs on the nose, this guitar is no featherweight – the previous incarnation was listed as having a lightweight mahogany back, but this time the specifications state simply `mahogany’ – but it balances so well on a strap that it feels like a significantly lighter instrument. The `Pattern’ neck shape is an update of the old Wide Fat profile, with a little less shoulder, based on Smith’s pre-factory design. It’s a subjective area, but we’ve always been of the opinion that, all other factors being equal, guitars with big necks sound better. We’re right at home with the feel: it’s a palm-filler alright, but it’s unlikely to scare anybody off.

Plugged in, when compared to our reference Gibson fitted with 50s PAF replicas, Paul’s Guitar immediately sounds thicker. The 408N pickups might look like mini-humbuckers, but their character is closer to a full-sized ‘bucker; the bridge pickup in full humbucking mode has a slightly higher output, thicker mids and a shade less high-end bite than a PAF, none of which are negatives – it just sounds different: a little more refined and modern, with a fuller range. It’s a similar scenario in the neck position, where the PRS is fatter and creamier for lead work, but the Gibson’s lower output and more nasal voice makes it easier to retain clarity and separation when playing overdriven chordal rhythm parts. 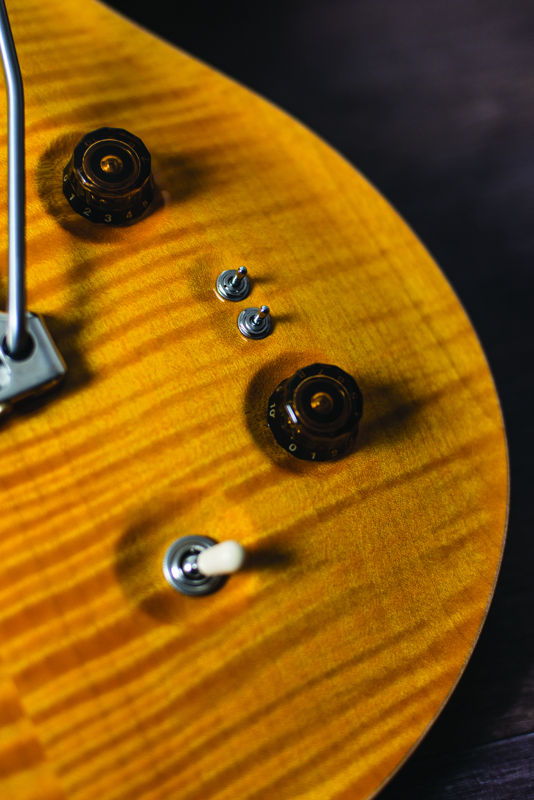 Where Paul’s Guitar races off into the sunset compared to a vintage-style Gibson is, of course, in the versatility stakes. In practice, the grainier split-coil voices – with only a very slight, barely perceptible volume drop-off from full ‘bucker mode – are probably closer to the vintage-spec PAF-alikes when both are played with gain, though there’s still more bass in this mode than from our Gibson’s tighter-voiced humbuckers. The ability to switch to single-coil sounds without disappearing in a mix is a real boon – especially in combination with a pedal such as a Fuzz Face, that works far better with single coils than it does humbuckers – and mid-song switching quickly becomes intuitive.

Clean tones are perhaps where Paul’s Guitar is most impressive – there’s a bell-like purity and vocal quality, with touch sensitivity in spades in all pickup positions. Into spring reverb and a touch of slapback, it’s lush and addictive; with such a well-behaved vibrato system, you’ll find yourself playing fewer notes and sounding better. 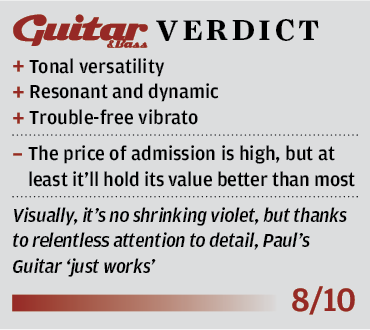