With a choice of three interchangeable analogue reverb tanks, can the Element put an old-school spring in our cowboy boots? 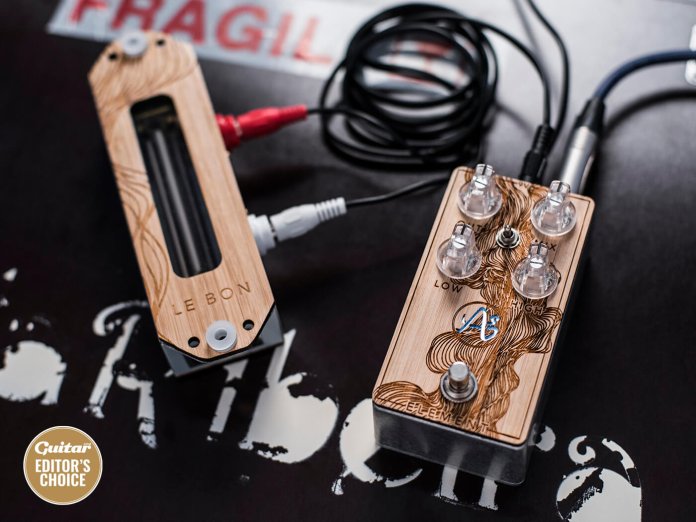 Reverb is one of the most distinctive and crucial cornerstones of numerous legendary guitar tones, and for many players, there are very few guitar-playing situations that can’t be improved significantly with a splash of genuine spring ambience.

Rather than engineer a complex digital reverb pedal, with the Element, French company Anasounds has opted for a back-to-basics approach. A single stompbox houses the controls and it’s available with one of three genuine spring-reverb tanks (or all three, via the Premium Bundle, on test here).

The tanks are quickly interchangeable by simply hooking up the supplied (if somewhat flimsy) TRS to RCA cable from the pedal to the relevant tank, which covers all audio and power duties.

Running on standard nine-volt centre-negative power supply – integrating easily into your pedalboard – the icing on the cake is the fact that these reverb tanks have been specifically designed to be mounted beneath your pedalboard, keeping them out of the way of stomping feet, as well as minimising the impact on your precious topside pedalboard real estate.

Simply choose the reverb tank that meets your sonic needs, mount it to the underside of your pedalboard using the supplied shock-absorbing grommets, et voila.

The tank choices begin with ‘Le Bon’ (The Good), which at just 180 x 60 x 40mm, is only a little longer than an average guitar pedal and is claimed by Anasounds to be the world’s smallest ever reverb tank. Next up in the range is ‘La Brute’ (The Bad), which, at 235 x 84 x 40mm, is roughly twice the length of the controller pedal itself.

Finally, ‘Le Truand’ (you guessed it, ‘The Ugly’) is the largest tank at 425 x 109 x 40mm and promises all the Spaghetti Western soundtrack ambience you’d expect from a tank similar in dimensions to that of a Blackface Fender Twin Reverb.

As well as being pedalboard-friendly, this modular concept also allows you to place a tank in the back of your combo or speaker cabinet and transform your amplifier with real spring reverb in a completely non-invasive and reversible manner.

It’s an enticing prospect for vintage tweed or Vox amp lovers who covert old-school reverb tones but wouldn’t want to perform any permanent mods to their prized amplifiers. Another use for the Element could be in a recording studio, where all manner of signals could easily be given a range of spring reverb treatments for some vintage ambience.

With its eye-catching, laser-etched bamboo front and distinctive custom graphics, the Element’s ‘brain’ unit features a true-bypass footswitch and onboard controls for output (how hard you push the reverb driver transformer, ranging from subtle to very dense sounds), mix (offering everything from 100 per cent dry to 100 per cent wet), low and high equalisation for tonal control of the reverb decay and a small toggle to overdrive the reverb transformer.

The ‘Le Bon’ immediately contradicts its diminutive dimensions and we are amazed at the rich, lush ambience that emanates from this tiny tank – so much so that we check we haven’t connected one of the larger tanks by mistake!

With a maple-’board 1950s-style Strat into a vintage tweed Deluxe, we are treated to a sweet, warm and splashy atmosphere that integrates with your tone in an organic and natural way. It’s missed enormously once you turn it off.

The ‘Le Bon’ is a lot of fun and if this was the only available tank option, we’d already be very impressed indeed. Luckily, both the ambience and the grin on our face widens when switching to ‘La Brute’. A dollop more splash and a smoother, longer decay that’s richer in harmonics surrounds our core tone with a halo of natural ambience that flatters dynamic playing and sits perfectly in a band mix.

Switching to the ‘Le Truand’, we feel this tank has been rather harshly monikered, as there is nothing ugly about it whatsoever! Lush, splashy ambience in the great tradition of Blackface Fenders awaits. There’s a much longer decay and even at the lowest mix settings, the reverb adds widescreen dimension to your tone. Push the mix and output controls and cut some bass for an entrancing retro soundtrack wash.

When run after overdrive and fuzz, this tank never gets overpowered, and melds with your amp tone in a way that’s much more organic than even the most sophisticated digital spring emulations. As if that wasn’t enough, flicking the onboard mini toggle to overload the transformer delivers a unique and fun special effect that adds a cool fuzzy drive to reverb trails. It’s not an everyday effect, perhaps, but it’s a creative addition.

Anasounds deserve huge praise for coming up with an ingenious way to integrate real spring reverb into your setup without having to lug around a heavy external outboard unit or have a fragile spring tank directly underfoot. With three different reverb voices and plenty of tone-shaping options in each case, there’s something here for every spring reverb addict.