Promising a new take on two classic overdrive pedals in one unit, is it time to crown a new king of tone? 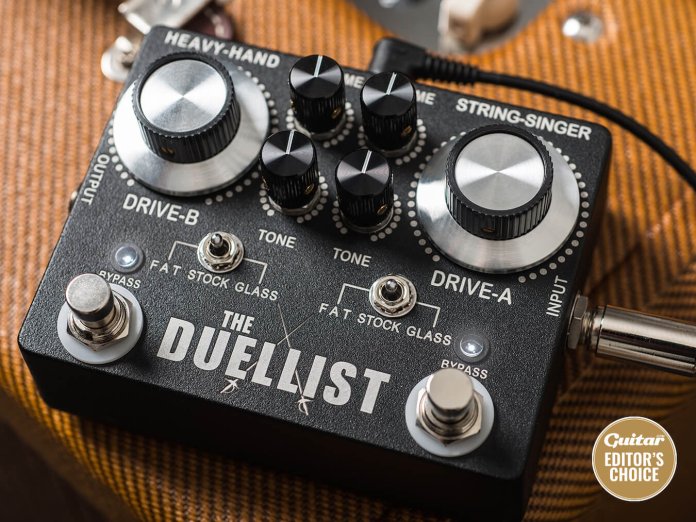 British blues guitarist Jesse Davey set up King Tone following the demise of his award-winning blues band The Hoax in 1999. Interested in electronics from a young age, Davey was often seen sidestage seconds before a gig, soldering iron in hand, modifying the band’s gear in his relentless pursuit of tone. Now based in Los Angeles, Davey thankfully crafts his range of hand-built KingTone pedals in less of a rush.

Dressed in a sharp laser-etched black enclosure, The Duellist features two distinct overdrive circuits – the String-Singer and the Heavy-Hand – that can be run independently or in combination (String-Singer into Heavy-Hand only) via their true-bypass switches.

“On tour, I would normally use two overdrive pedals,” Davey explains. “This would give me two different overdrive tones. I’d then use them together for the full-on moments. To have these tone options in one pedal was something I had wanted for years.”

Building on the obvious DNA of a Tube Screamer with a tone firmly rooted in Texas, the String-Singer is a more versatile, polished and grown-up cousin. It’s as though your favourite overdrive pedal has swapped its bar-gig stone-wash denim and cowboy boots for a suave new suit.

The clue is in the name, but it’s particularly well-voiced for a Stratocaster’s single coils into a higher-headroom Fender amp; the String-Singer absolutely nails everything from a cleanish boost to super smooth, harmonically-rich lead tones.

It’s dynamic and tactile, with a significant volume hike if required. Running into a tweed combo, the tone is rich, thick and oozes classy harmonic content. The tone knob has a sensibly voiced range – instant closed-back heft or Blackface glassiness awaits at the flick of the perfectly voiced pre-clipping EQ switch.

The Heavy-Hand side is Davey’s take on a 90s Marshall Bluesbreaker pedal. Equally refined, it retains the original’s touch-sensitive bluesy breakup at lower gain settings but adds a far superior range of volume, tonal control and gain.

Switching to a PAF-loaded Les Paul, the Heavy-Hand has more neutral EQ-curve than the String-Singer and an arguably more versatile voice. Beano awaits at lower settings, wind it up and there’s Kossoff, Young and Cream. Stack both sides together for a soaring smooth lead voice that’s very addictive.

You can expand the pedal’s versatility further by flipping the internal dip-switches to unleash a brutal distortion mode that screams heavy rock, or switch either side to asymmetrical clipping to deliver either a more open, gritty low-gain tone, or one that is reminiscent of a great germanium fuzz with the gain wound up.

While some classic pedals can fall short today in regard to output level, reliability and versatility, The Duellist refines these classics to a suitably regal degree. Gracing the pedalboards of such luminaries as Kirk Fletcher, Josh Smith and Joey Landreth, it seems The Duellist is the current overdrive du jour – and for good reason. It’s arguably one of the most solidly built, tonally versatile, professional-sounding overdrives we’ve tried in a long time.