An ancient and sharp-edged weapon from Music Man’s past has been forged anew for the modern player. But can it cut it? 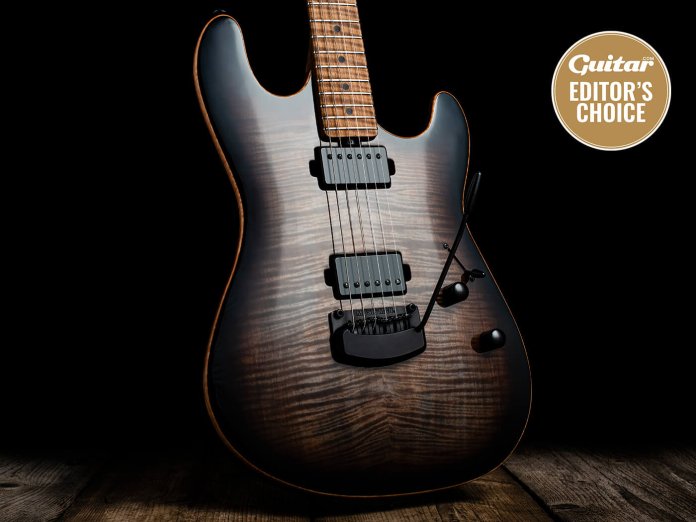 The original Sabre was a utilitarian George Fullerton and Leo Fender double-cutaway design that featured in the Music Man catalogue from 1978-1980. Four decades later, the model name returns in this considerably more luxurious incarnation, whose sleek contouring and carved maple top lands it somewhere between a Strat and a PRS.

The body has been crafted from okoume, a less heavy alternative to mahogany, and atop that is the bookmatched and heavily figured maple cap. It looks stunning here in moody Cobra Burst and the boutique vibe is cranked up another notch by the roasted flame-maple neck, finished as sumptuously as ever in Music Man’s proprietary blend of gunstock oil and hand-rubbed wax.

Matte-black hardware is a polarising choice but here it works harmoniously with the smoky finish. If you aren’t a fan, fear not: the Sabre’s three other colourways feature chrome parts instead. 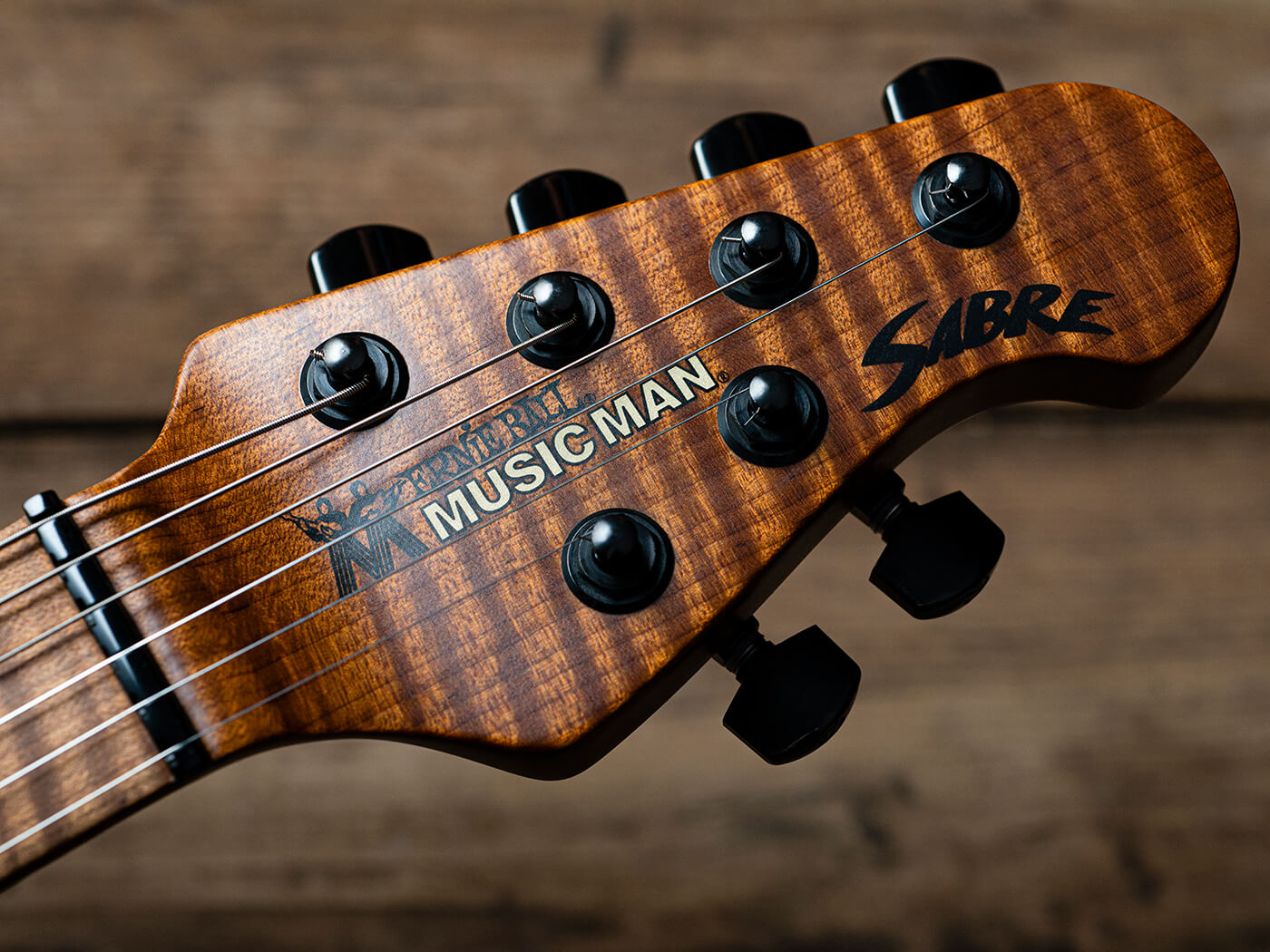 Music Man describes the Sabre’s neck as “slightly wider” than the standard, due to its 43mm nut width, but any tangible difference between this and the 41.3mm width sported elsewhere in the catalogue is subtle at most. Initially at least, the neck profile feels rather slender for our tastes. But after an hour or so of playing, the lack of fatigue demonstrates just how comfortable the carve is – comfort that’s enhanced by the drag-free finish.

Plugged in, the in-house humbuckers aren’t as powerful as the Sabre’s rock-machine aesthetic might suggest and, with a Plexi patch dialled in on our Axe Fx III, the pickups prove to be voiced perfectly for rock and modern blues. Moving into heavier territory with a virtual Diezel VH4, we’re enormously impressed by the way the Sabre handles high levels of gain, and the clarity and separation of both overdriven and clean sounds is exceptional. In fact, we’ve rarely heard better note definition for chordal work. 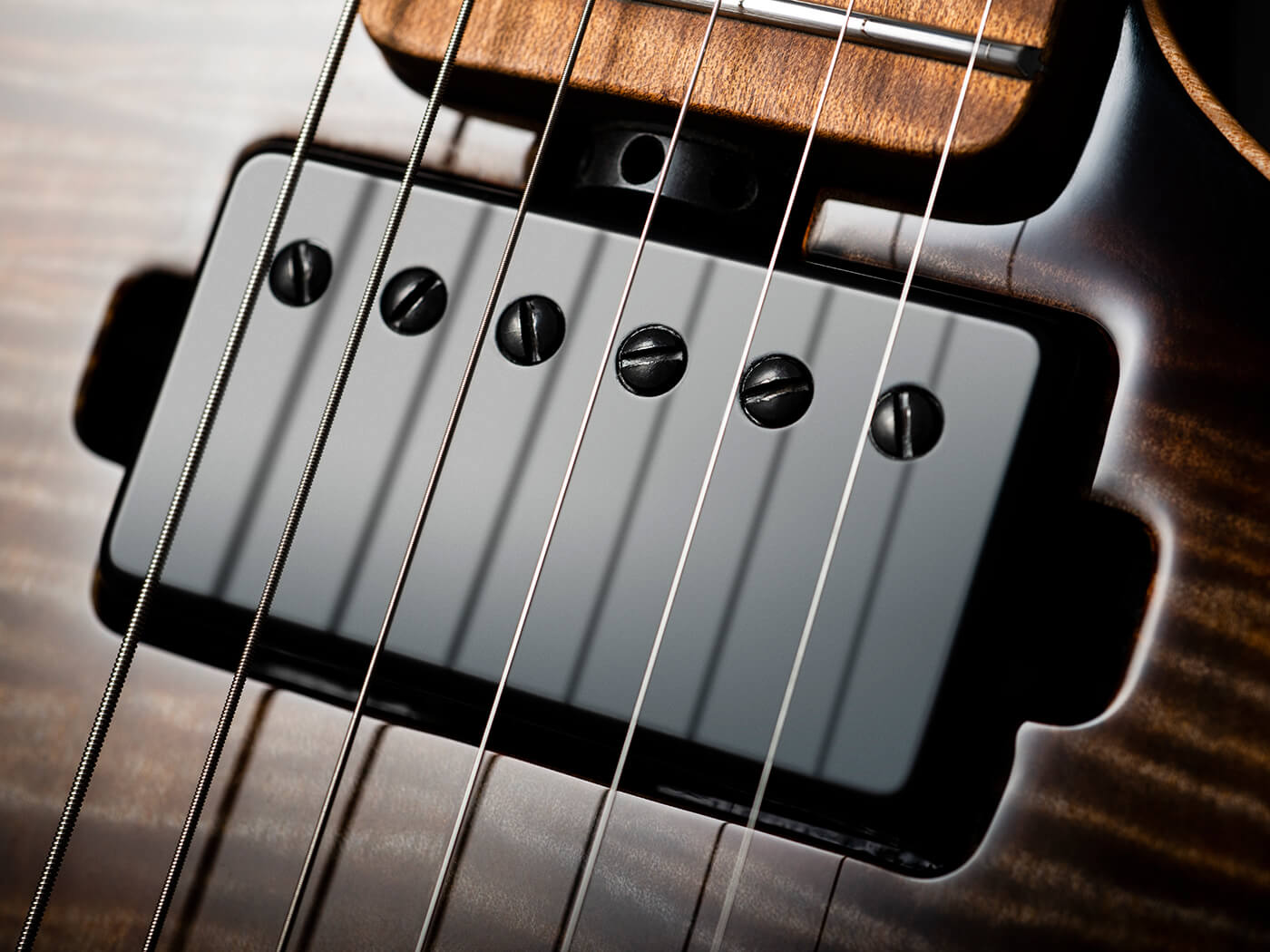 The in-between positions on the five-way selector offer parallel-wired combinations of the humbuckers’ inner coils (position four) or outer coils (position two). This unlocks tremendous tonal variety without a noticeable drop in volume, and the fit-for-funk spank in position four is enough to make any S-type sweat.

The Sabre has been positioned as a pro player’s instrument and it largely lives up to that billing. Heavy rock players may need to push the preamp gain on their amplifiers a little harder than usual to unleash aggressive metal tones, but more and more guitarists are getting hip to the notion that hot pickups aren’t necessarily a silver bullet for high-gain playing. Far from a blunt instrument, the Sabre is a nuanced design that cuts through with articulation and finesse.