What happens when Britain’s most intimidatingly high-class pedal maker branches out from compression and overdrive into vibrato and tremolo? 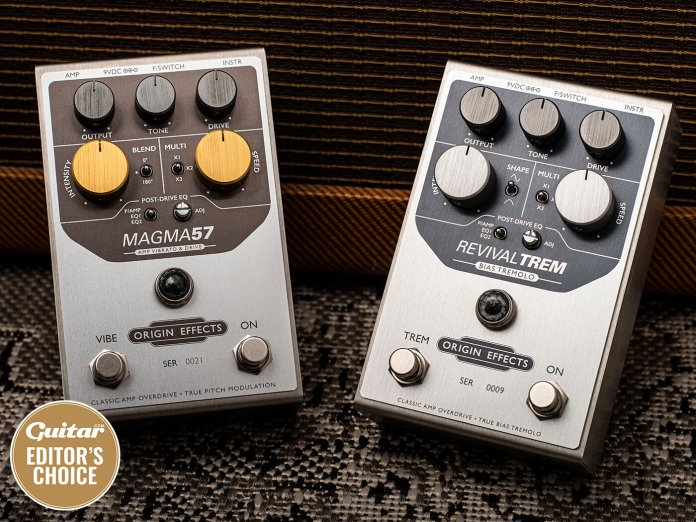 In less than a decade, Origin Effects has established itself as that most comforting of things: a great British luxury brand built on old-school engineering quality and heft. It’s no accident that its logo looks like something you’d see on the side of a steam strain.

But 2020 was the year that Origin decided to get a bit more ambitious. After nailing compression and overdrive so reliably it was almost getting boring, the next step was a move into modulation… first with the RevivalTrem, inspired by the brown-clad Fender Deluxe of the early 60s and its power-valve bias tremolo; then with the Magma57, an unofficial tribute to the Magnatone 200 Series combos of the 50s and their rich vibrato effects.

These are not mere modulation pedals, however: in both cases you’re getting a recreation of the whole amp, not just the wobbly stuff. So the main bypass footswitch on the right engages an overdrive circuit, while the one on the left adds the ‘optional’ effect on top. 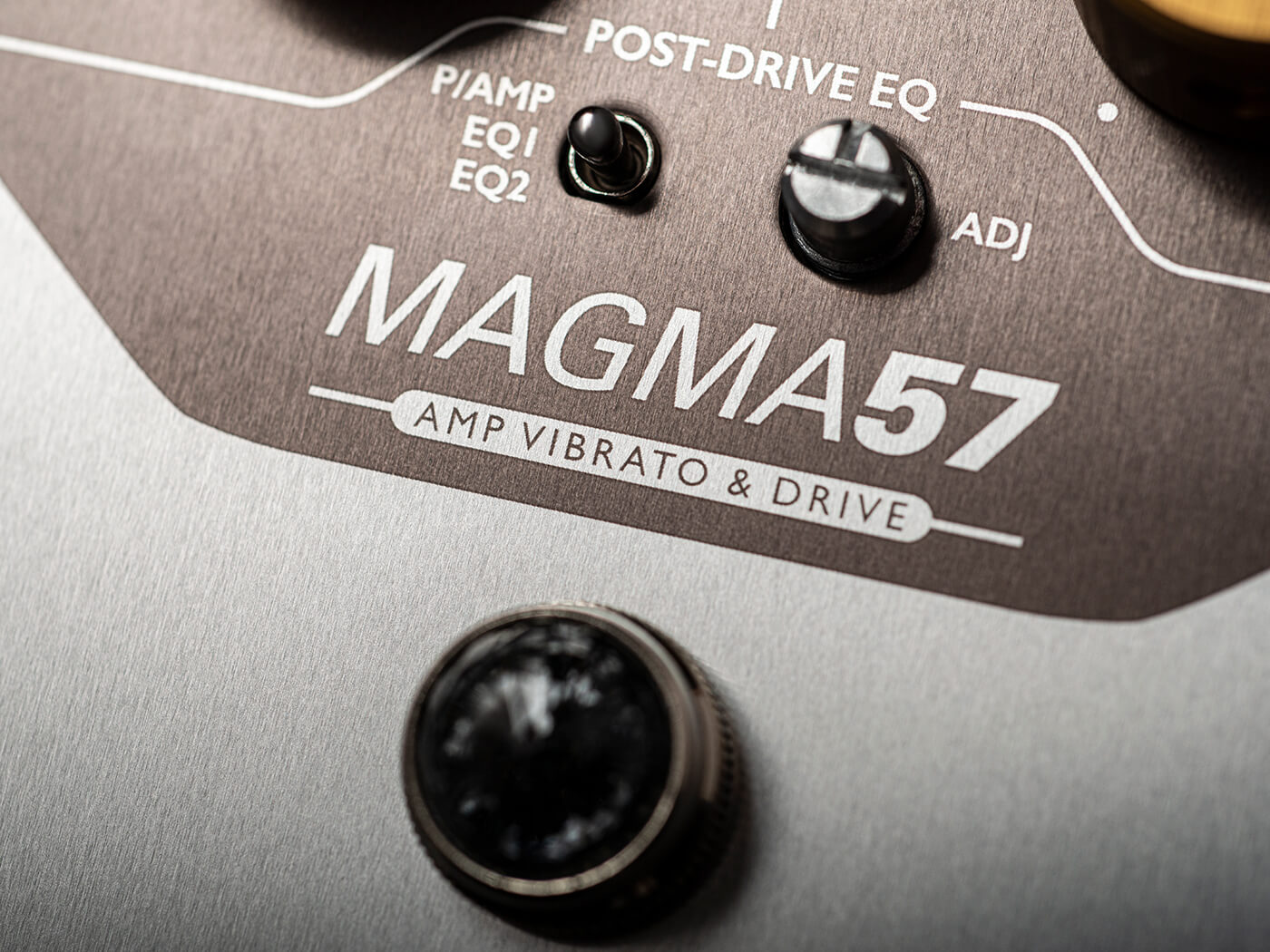 Both units are reassuringly true to the now-familiar Origin style: they’re heavy customers in brushed stainless steel enclosures with aluminium control knobs and, other than some muted brown and a dash of gold on the control panel of the Magma57, no more colour than is absolutely necessary. The amp-style jewel lights are certainly colourful, mind – in both cases they pulse in time with the modulation when engaged (yellow for the vibe, green for the trem) and revert to a solid red in drive-only mode.

Let’s take a look at those controls, then. First up, each pedal has a row of three small knobs across the top for adjusting the output level, tone and gain of the overdrive circuit. There’s also a post-drive tonestack at the bottom, allowing you to switch between three EQ profiles – more trebly or more bassy plus a ‘power amp’ option voiced for DI – and a fine adjustment knob for the high-frequency response. 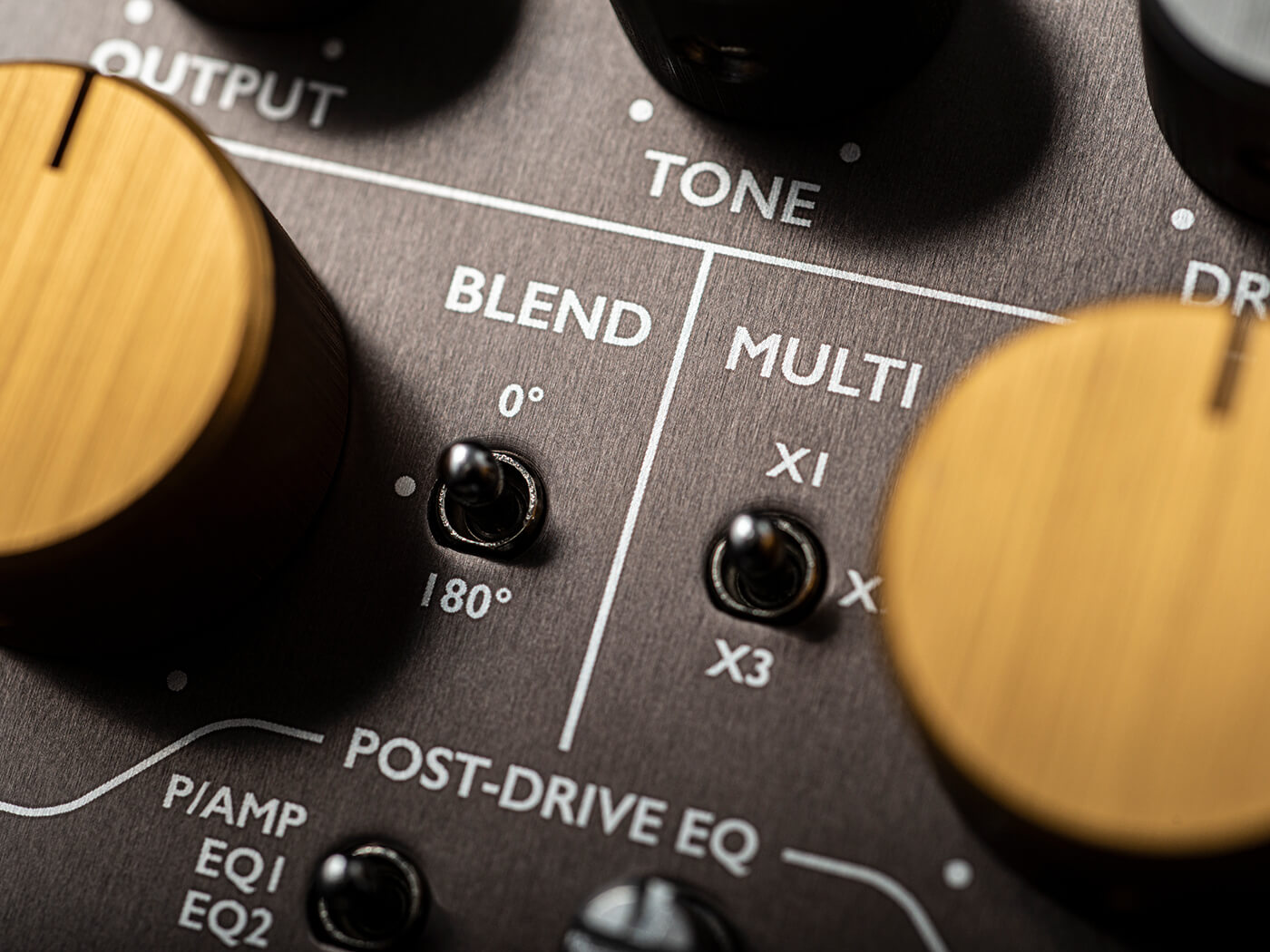 In the middle is where we find the fruity stuff. For the Magma57 that means vibrato intensity and speed, plus tiny three-way toggle switches for mixing in the dry signal in or out of phase and changing the range of the speed control. The only real difference on the RevivalTrem is that the left-hand switch has just two settings, for two tremolo waveforms.

With both units, you have the option to use an external footswitch (not included) to set a tap tempo or bypass the modulation. We’re inclined to think an expression pedal input for riding the tempo would have been more useful, but you might well disagree. 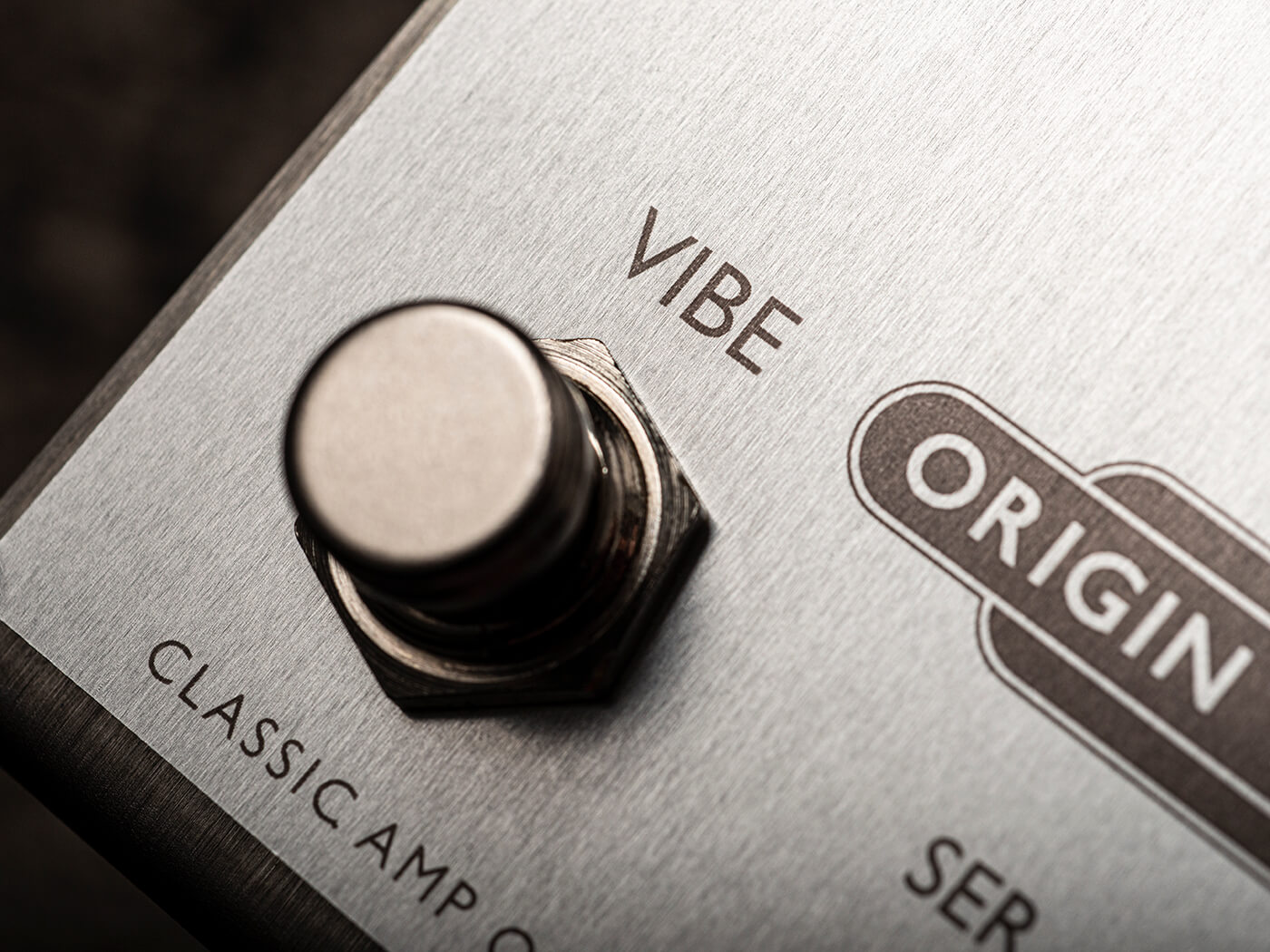 It’s an Olympic year, probably, so gold comes before silver and the Magma57 steps up first, running into a completely clean amplifier to give its own amp-mimicking powers a blank slate to work on. And, oh my, what powers they are.

There’s not a lot of gain on offer here – it’s pretty restrained even with the drive control at three o’clock – but what you do get is a distinctive kind of dirt that’s rich and gurgly but tight and snappy at the same time. The only other pedal we can think of that comes close is the fine but severely limited Electro-Harmonix Germanium OD; but there’s much more refinement, as well as flexibility, in Origin’s overdrive. What’s most impressive is how naturally thick the low end feels, without ever getting flubby, while the unconventional tone controls bring just enough scope to keep things perfectly focused no matter what kind of pickups you’re using. 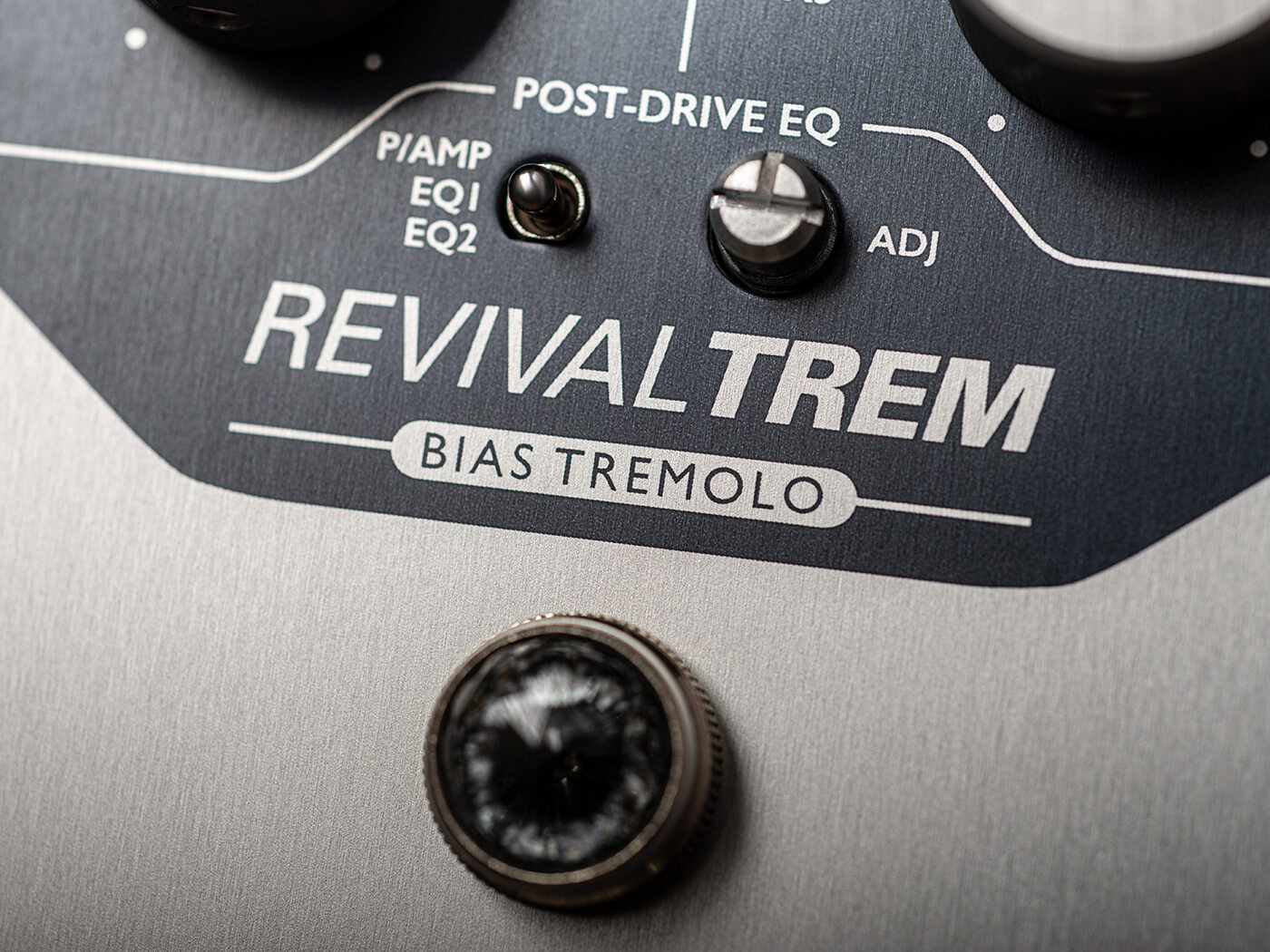 Sheesh, we’re having so much fun we almost forgot to try the vibrato. Here you’re getting three very distinct effects – broadly speaking, something like a Uni-Vibe in the top position, pure pitch vibrato in the middle, and an almost Leslie-like effect (with a pronounced bass cut) when the two signals are blended out of phase. It’s all good, and we’d happily pay half the price of the Magma57 for a three-mode vibrato-only pedal that sounded like this.

Now we turn to the RevivalTrem, and our first impressions are of an overdrive that’s a bit, well, normal. That turns out to be horribly unfair, though: once we’ve cleansed our aural palette by stepping out of the studio for a quiet cuppa, we’re better able to appreciate a sound that’s smoother and more saturated than that of the Magma57… and every bit as likeable. It’s about as organically amp-like as drive from a stompbox gets, with a much higher gain range than the other pedal and a controlled fullness to the low end that’s closer to modern boutique than ragged tweed. 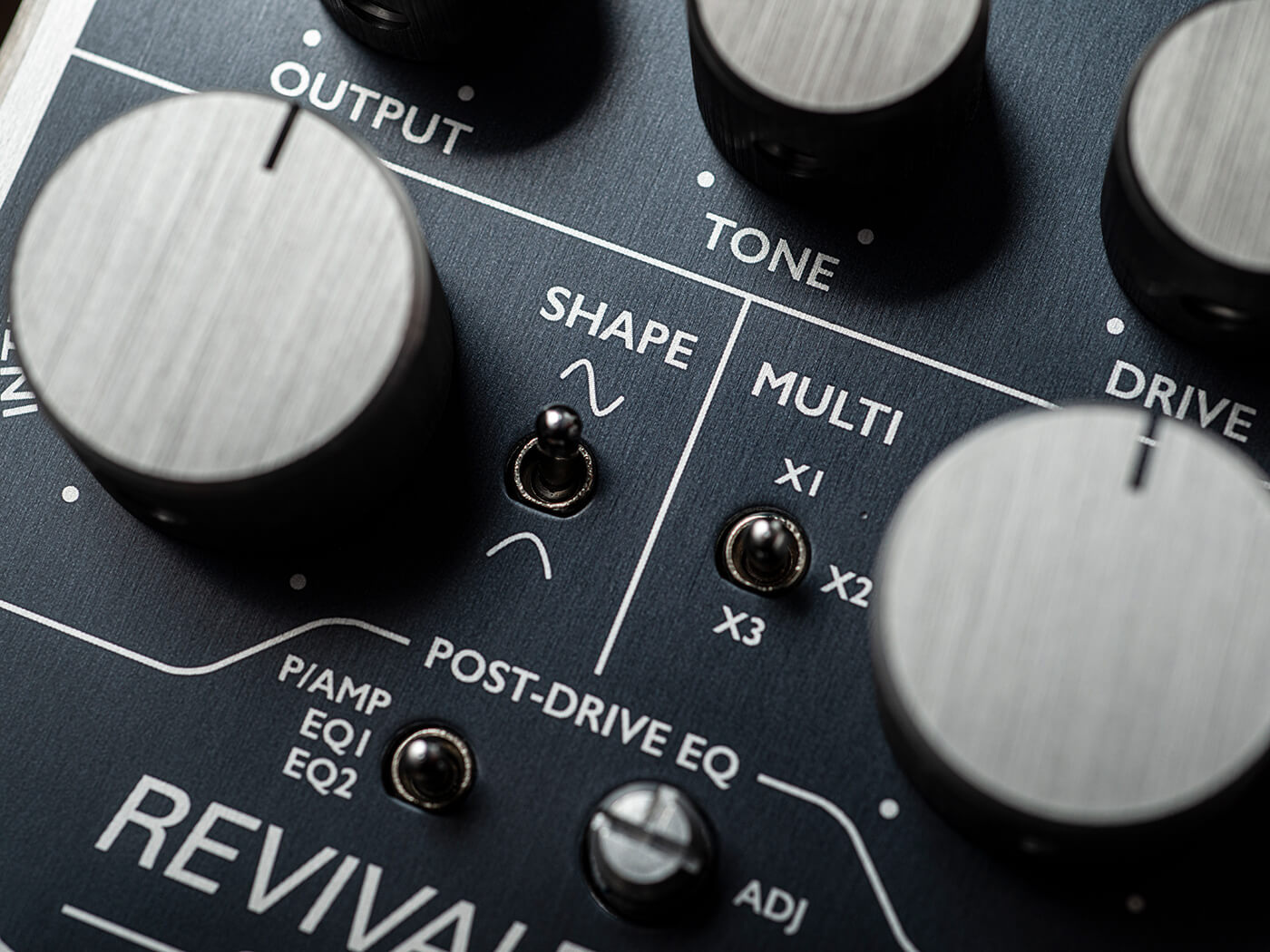 Again the two different EQ sections allow for plenty of tonal shading, whatever guitar and amp you’re using, while the tremolo is every bit as warm and throbby as we were led to expect. The shape switch lets you flip between a sine wave and a ‘full wave’, the latter bringing a much stronger thump to the peak of each cycle, but in either setting the effect is highly dynamic: hammer those strings hard enough and you’ll barely hear it until a chord starts to fade.

Finally, once the neighbours’ angry wall-banging starts to get a bit oppressive, we switch off the amp and give both of these pedals a spin in DI mode. Setting the post-drive EQ switch to the top position, plugging straight into our audio interface and toggling through a few speaker cabinet impulse responses in Logic, they both do a sterling job. Crucially, they’re realistic enough to represent a genuine alternative to recording with a dedicated preamp or relying on software amps.

Neither of these pedals is perfect – the bypass switching is a little jerky, it’s a shame you can’t engage the modulation independently of the drive, and the Magma57 is literally twice as expensive as its most obvious competitor, the Crazy Tube Circuits Killer V – but the fact that we’re giving them both 9/10 anyway tells you all you need to know about how stunning they sound. 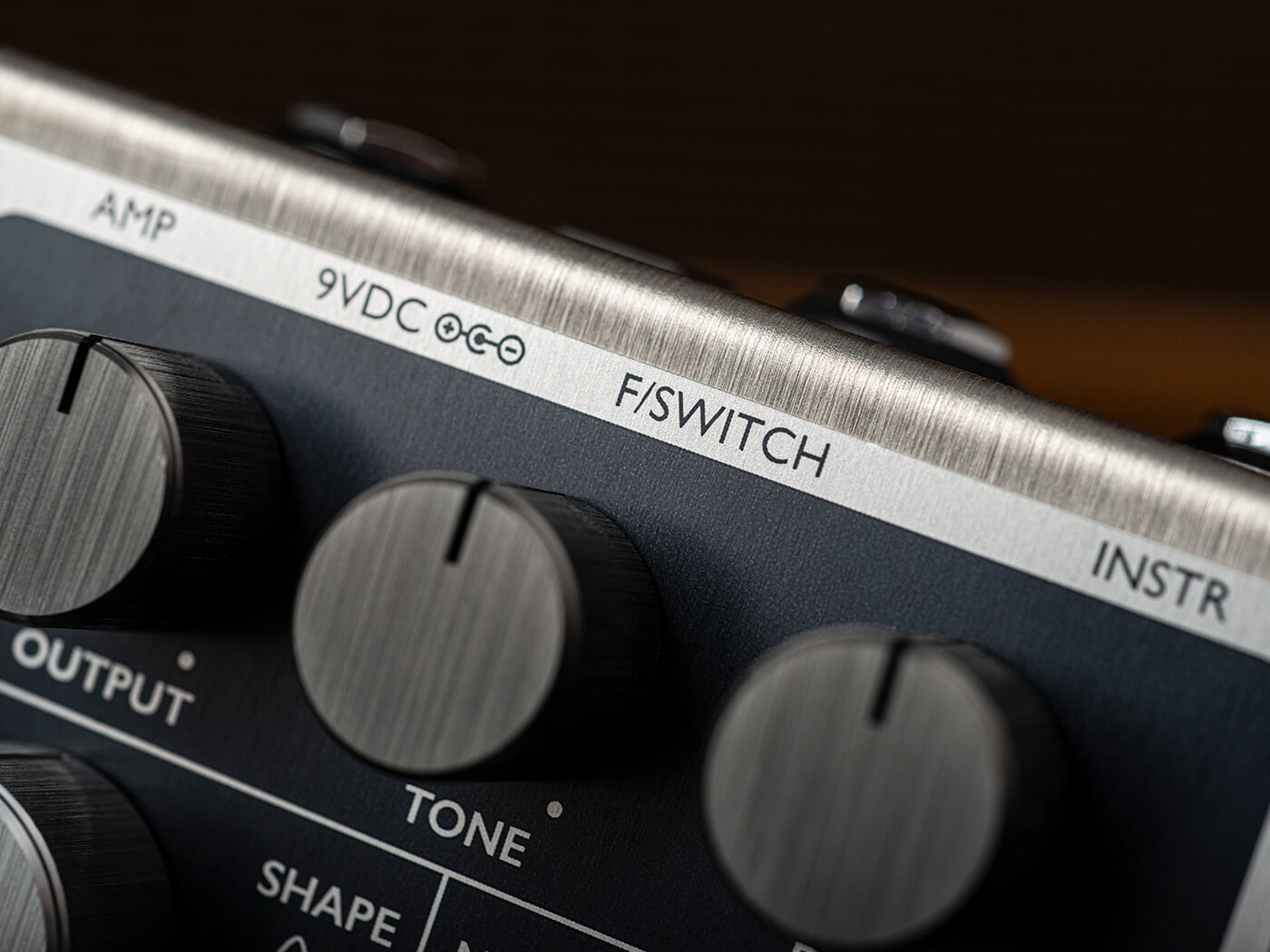