New for 2019, Annie Clark’s affordable signature model gets a pair of full-size humbuckers and a choice of candy-store colours. 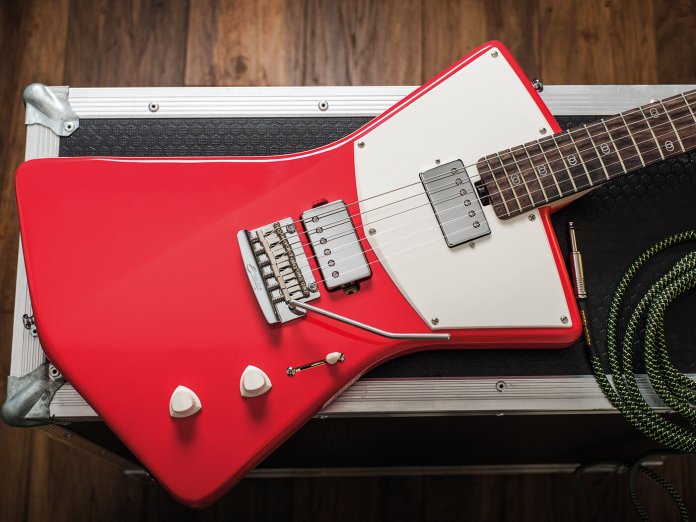 Music Man’s St. Vincent signature model is one of the most important and striking artist collaborations of recent times. The USA model launched back in 2016, followed in 2017 by an Indonesian-made Sterling version that costs about a third of the price and mirrors the triple-humbucker spec of the original. The Music Man St. Vincent HH arrived a year later, while NAMM 2019 saw the Sterling equivalent served up in HH configuration and classic Daphne Blue and Fiesta Red hues.

It says something about the pervasive cultural influence of the 1950s American automobile that so many of the colours originally developed for that industry (well before finding their way onto Californian guitars) still appear utterly contemporary in 2019.

Without wishing to reignite the debate about the ‘Flamingo Pink’ finish on Hank Marvin’s legendary Stratocaster – how much time have we got?! – we’ve seen ‘Fiesta Red’ finishes that are more orange or pink in tone than this, but the important point is that the poly shade chosen here looks simply fantastic applied to the retrofuturist lines of Annie Clark’s signature guitar.

The distinctive body shape was inspired by Music Man’s angular Albert Lee electric, Clark’s old Harmony Bobkat, mid-century modernism, Japanese designs of the 1970s and the work of Russian avant-garde artist Kazimir Malevich, among others. Although it has more angles than it does curves, the ergonomics are almost as gloriously comfortable here as they are on the USA models.

41mm deep at its centre, the body thins out dramatically on the rear of the bass side, where a huge, 50s-Strat-style scoop acts as a ribcage/belly contour. When played seated or in the relatively high strapped-on position that Clark prefers, it’s very comfortable indeed. An arm resting on the angled forearm chamfer helps counteract the slight neck-heaviness of our review sample.

Despite the disruptive nature of the body design, unlike some other ‘shape’ guitars, acquainting yourself with the St. Vincent HH doesn’t require a period of adjustment. Don’t understand what we mean? When playing a reverse-body Firebird it can initially feel like everything has shifted a couple of inches off to the left. In contrast, this is definitely a ‘home’ fixture, with everything in its right place.

Although we don’t get a roasted figured-maple neck finished in Music Man’s gunstock oil and wax blend on the Sterling model, the neck certainly doesn’t feel like an area in which corners have been trimmed to hit a price point. A gloss finish on the peghead gives way to a satin sheen behind the nut and the soft-shouldered, medium-depth profile is an instant winner – the edges of the rosewood fretboard feel very lightly broken-in, too.

Along with the dual-action truss rod and locking tuners, it’s a detail that you don’t see every day on a £799 guitar, but there are some areas in which the guitar’s pricing is palpable. Unlike the bespoke geometry of the parchment-coloured scratchplate around the front, or the stylish three-cornered control-knob design that’s easy to manipulate in sweaty onstage or rehearsal conditions, the rear control and vibrato-cavity plates are 2.5mm black plastic, and mismatched.

The vibrato plate at least has a bevel, but the control-cavity plate has square edges that have been left with a rough look and a sharp feel. There’s also no screw at the corner nearest to the jack plug, which means that part of the plate can be lifted away from the guitar’s body relatively easily. It’s a shame that an instrument that’s the product of so much consideration, and has such an elegant appearance when viewed from the front, has a whiff of the parts bin around the back.

Nevertheless, despite arriving with an overly spacious neck pocket and a first (high E) string that sails a little too close to the fretboard edge, an acoustic workout reveals that this is a guitar with lively harmonics, bags of sustain and an even decay. Time to search for our coolest-looking cable and plug in…

Although it’s a specification seen on countless hot-rod guitars, it can be difficult to get a pair of regular humbuckers to sound good in a Fender-style bolt-on. Too much heat and you end up with drab and undynamic cleans, not enough body and overdriven tones are nasal, rather than vocal. No doubt the mahogany body and bent-steel bridge saddles here are playing their part, but even though our review guitar turned up without any height adjustments made to the humbuckers’ screw coils, the St. Vincent HH has the balance of power and clarity just right.

Users of dense fuzz or lots of ambience – such as Annie Clark, for a start – will appreciate the way the treble response stops everything turning into inarticulate mush, but it’s equally useful for breathing life into more traditional classic- and alternative-rock overdrive tones. Outside of the versatile full-humbucker voices in positions one, three and five, position two’s combination of the outer coils has springy, Telecaster-like tones in abundance, while position four’s inner-coil combo has a Gretsch-like jangle with an almost semi-acoustic character.

Set flat to the body with no upbend, Sterling’s ‘Vintage Tremolo’ is anything but. Huge bar dips return to pitch accurately every time, which encourages us to go way beyond our usual Bigsby or Stratocaster shimmers into much more inventive territory. There’s something about this guitar that encourages experimentation and musicality, and we like it a lot.