One of the world’s most individualistic brands refreshes a model that will forever evoke Paul McCartney. Gareth Morgan takes a look…

Rickenbacker’s 4003 bass will forever be associated with late Beatles and Wings-era Paul McCartney and Chris Squire from Yes. In fact, neither of these famous British groove-merchants wielded a 4003, instead using the 4001S, produced for 20 years from 1961.

A reworking, the 4003S appeared in 1981, with triangle fingerboard inlays (dots from 1984). It’s recently had a spruce-up with the addition of a pull-up vintage setting for the bridge pickup tone control, which accesses the treble punch of the 4001 via a cunning capacitor in the bridge pickup circuit. You still get two dinky single-coil units, the bridge obscured by the chunky chrome pickup guard and housing, and two volumes and two tone controls.

The vista is still resolutely Rickenbacker, sporting the familiar crested wave upper-body shape, with elongated upper horn, that eschews the white binding strip for sleeker lines created by subtly bevelled edges, which are more pronounced in the upper waist section (for a bit of rib-cage comfort). The lower bout is a half-teardrop affair, culminating in a stubby dorsal fin horn, cut away beyond the highest fret for superb access to the upper frets.

As it’s a thru-neck construction, the central maple chunk morphs into a comfortably playable neck, not super-slim, but holding no fear, and the unbound rosewood ‘board, alongside 20 medium jumbo nickel frets, displays dot markers on the face and top edge.

Two sections of walnut are added past the bakelite nut to create that familiar headstock with its wave-like scroll on the furthest edge, housing four chrome Schaller Deluxe open-gear tuners, although it’s dominated by the expansive black logo’d truss rod cover. The 4001S’s bridge is the shiny, super±chunky chrome RIC bridge/tailpiece unit that you always get on these instrumentsº so it must be good, right?

The 4003S balances nicely and the neck proves surprisingly playable, the superb upper-register access being a real boon if you want to get melodic. The basic tone is well balanced, too, with decent width, a growling edge to the E string, solid midrange and just a touch of high-mid honk informing clarity and highs with zingy attack. Use either tone control for shaping – they don’t work together – and you’ll find a sanitised and more versatile version of the flat-out sound, with less rasp and more of a true full-range feeling.

The bridge pickup dominates volume-wise, so soloing it delivers a gnarlier, more throaty version of the twin vibe, with snappy, barking punch and a more rubbery quality to the core of your note. Backing off the tone softens this up a bit, albeit with only one real audible variation from about half cut.

With the neck pickup, the focus is far more on warmth and fundamentals, with a pleasing woodiness, even if it is a bit weak-sounding.

Pulling on the bridge tone for the Vintage option leeches the bass-life out of the 4003S’s sound, although it adds another justifiable colour to the tonal palette. If you dig in, you’ll unearth the dry, rubbery rasp that is at the core of many of McCartney’s Ricky-fuelled grooves, while a harder pick attack will have you riffing in Chris Squire style before you can say Yes. 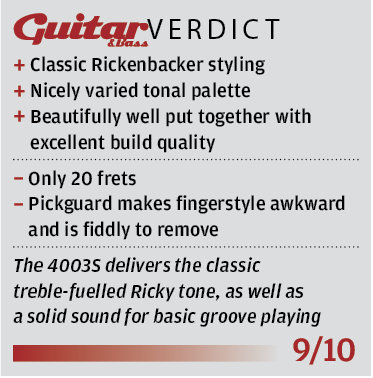