Despite being tone monsters, Leo Fender’s early TV front amplifiers are less sought-after than later narrow-panel tweeds. We find out if Rift’s interpretations of the 5A2 Princeton and 5A3 Deluxe circuits are boxing clever… 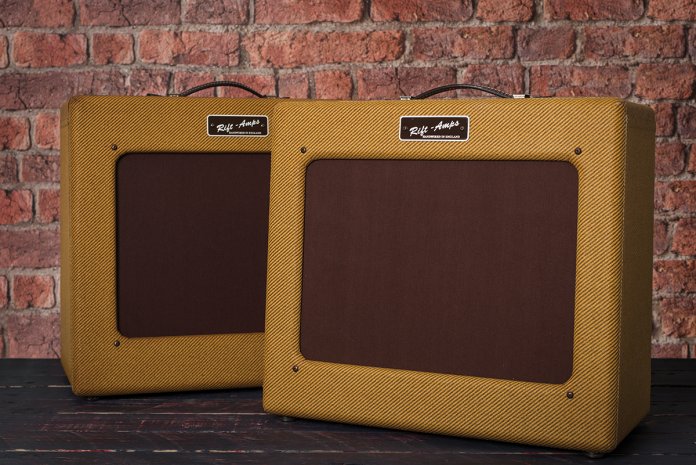 Launched in 1955, Fender’s ‘narrow panel’ 5E3 Deluxe went on to attain legendary status. Vintage prices have been buoyant for many years and few boutique amp builders and kit suppliers don’t offer a 5E3 variant of some sort.Meanwhile, less fancied Deluxe models have lagged behind in value, and until fairly recently, you could pick up earlier ‘TV front’ Deluxes for less than four figures. Sadly those days are gone and clean examples will now set you back over £2,500.

This reviewer has owned a 1951 5A3 Deluxe for over a decade, and a mutual love of old tweed amps saw us assist Chris Fantana of Rift Amplification by supplying the cabinet dimensions, internal voltages and circuit specifics of our vintage original when Chris began planning his own version of a 5A3, the amp that has become the Rift Tweed 15TV.

Creating a faithful tribute to a niche 60-year-old amp has practical hurdles: no parts suppliers Chris could find produced a 5A3-style chassis, and TV-fronted cabinets of the right dimensions are equally scarce. As a result, while the circuit, valve compliment, voltages and so forth are identical, the chassis has four inputs rather than three and the cabinet is very slightly larger. 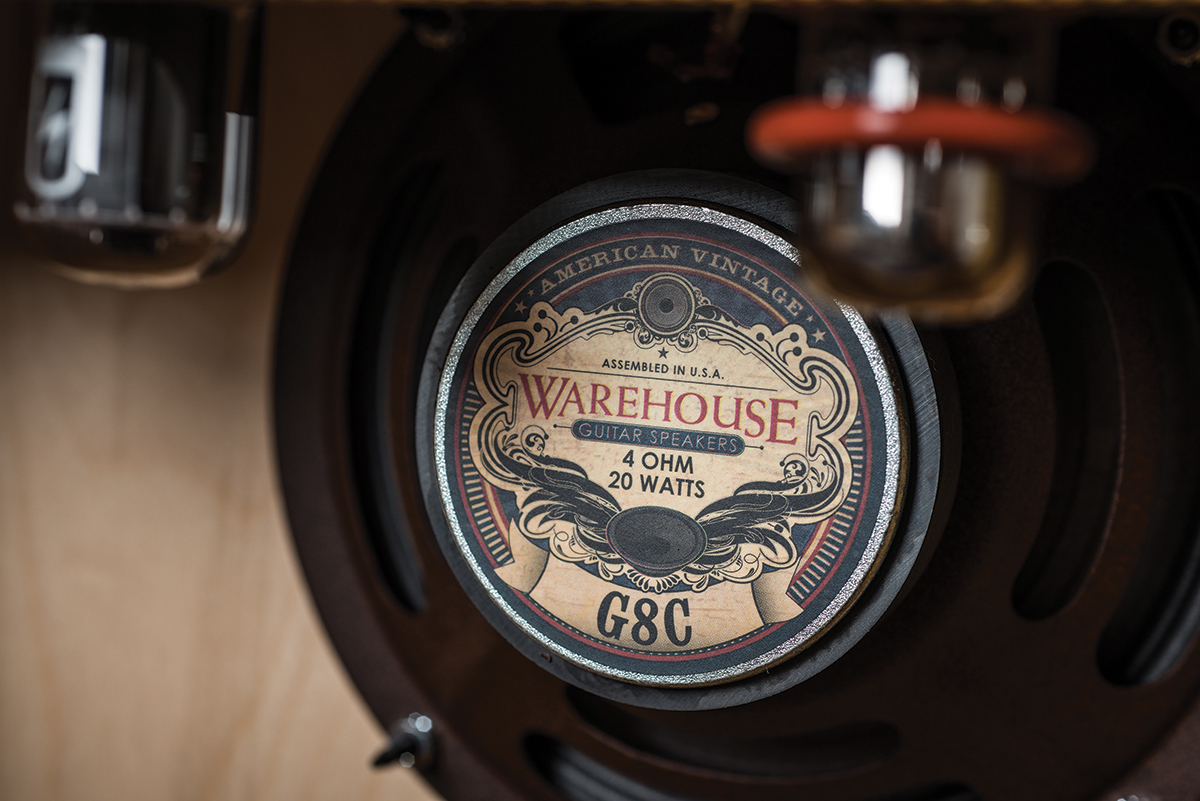 As if making one faithful recreation wasn’t enough, having seen Johan Segeborn’s YouTube video of a 5A2 Princeton giving a 5E3 the fight of its life, Fantana decided that he was going to create a single-ended version. For the 5TV, Chris made a more significant departure from the vintage formula by opting for an oversized cabinet. As well as filling out the tone and reducing some boxiness, the larger TV-fronted cab means that customers can spec the 5TV with a period-correct eight-inch speaker, or a larger 10-inch driver. You can even order a Rift 5TV with a larger cabinet and a 12-inch speaker. Our review example comes with the standard Warehouse G8C ceramic.

Like all Rift amps, the Tweed TV models are hand-built to order, and options include speaker choice, aged tweed, jewel light colour and alternative signal capacitors. In the case of the latter, you have a choice of red or yellow Jupiter units.

Red Jupiters are polyester film and tin foil capacitors similar to the type Fender used during the TV front era, whereas the yellows are sonically closer to the Astron capacitors used in wide- and narrow-panel tweeds of the mid-to-late 1950s.

Here we have a mixture of both, with reds in the 5TV and yellows in the 15TV. Both circuits are built on traditional eyelet board, with moisture resistant phenolic resin substrate rather than vulcanised fibreboard. For consistency and lower noise, carbon film resistors are preferred to vintage-spec carbon composites. 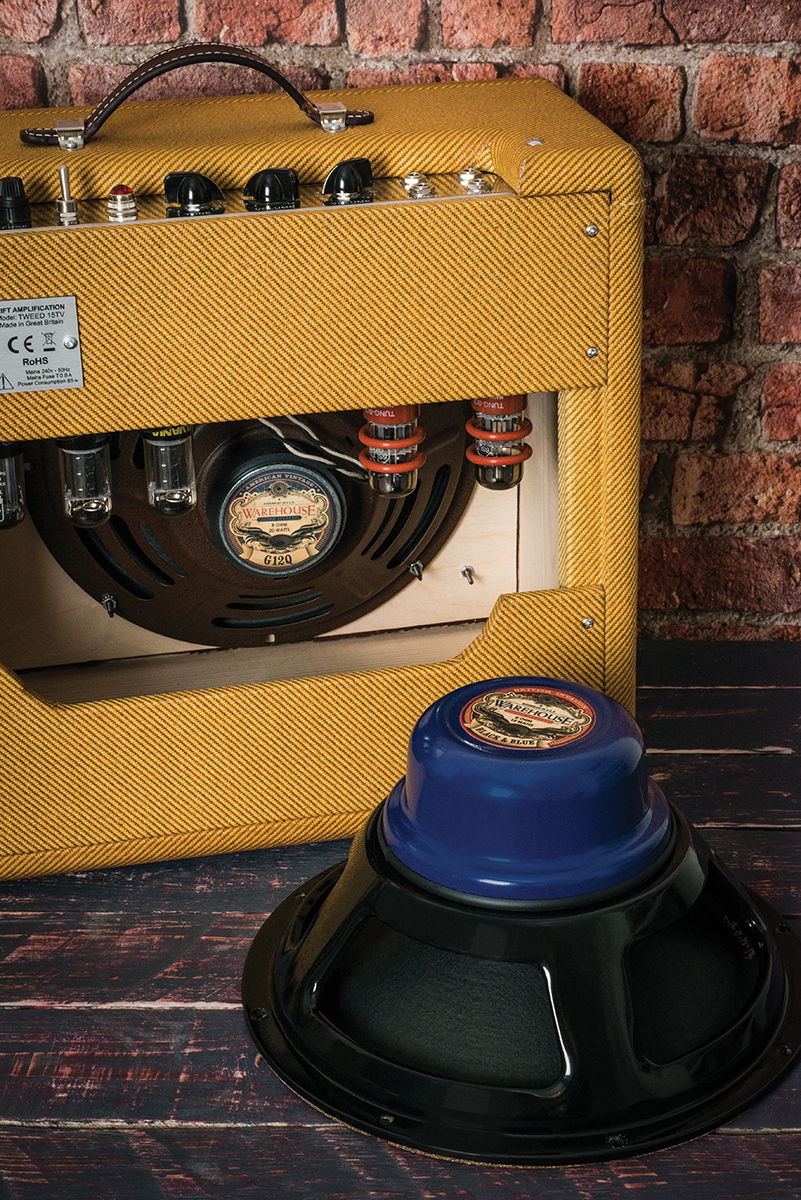 The rectifier and power valves will be familiar to most of us. What really sets earlier style tweeds apart from those that followed are the large octal tubes in the preamp that Fender used before migrating to the more familiar nine-pin 12AY7 and 12AX7 valves.

Since both of these amps were originally built with octal preamp valves, Chris has opted for Tung-Sol-branded 6SL7 double triodes – grid leak biased in the first stage and cathode biased in the second stage. Octal preamp valves can often be microphonic, so they’ve been fitted with heat-resistant rubber rings. In our experience, these are very effective at dampening down mechanically induced noises.

It’s worth bearing in mind that Fender developed the circuits replicated in these Rift amps back when swamp ash bodies, maple boards and low-wound pickups ruled the roost. So 50s-style Fenders that might be rather glassy with later amp designs sound particularly well-balanced and full-bodied through grid leak biased octal tubes.

The 5TV isn’t especially loud, bright or versatile. It has a boxy, raw-edged tone that you don’t get from most low-power amps. The eight-inch speaker limits low-end and the circuit restricts the highs, resulting in a strong midrange emphasis. 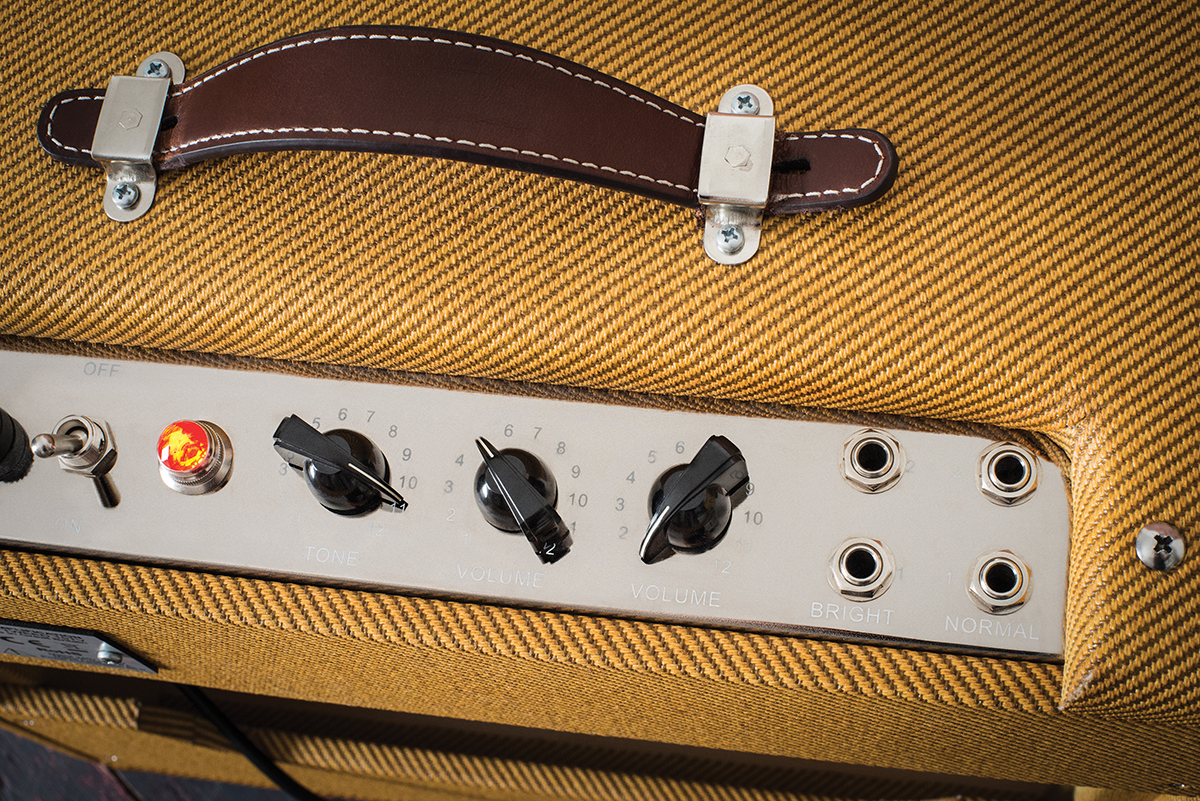 There’s a darkness to the sound, so for most applications, the tone control is best set fairly high. Take time to listen to the way it works because there’s a fairly narrow sweet spot. Balance it with the volume control and you’re rewarded with a warm, clear, old-school tone that suits jump blues and hollowbody Travis picking.

Although it’s always tempting to set the controls to stun with low-wattage valve amps, that approach doesn’t reveal the best of the 5TV.

In contrast to the 15TV, which seems to keep getting better as it gets louder, the 5TV eases into a slightly fizzy and papery rasp rather than creamy overdrive. 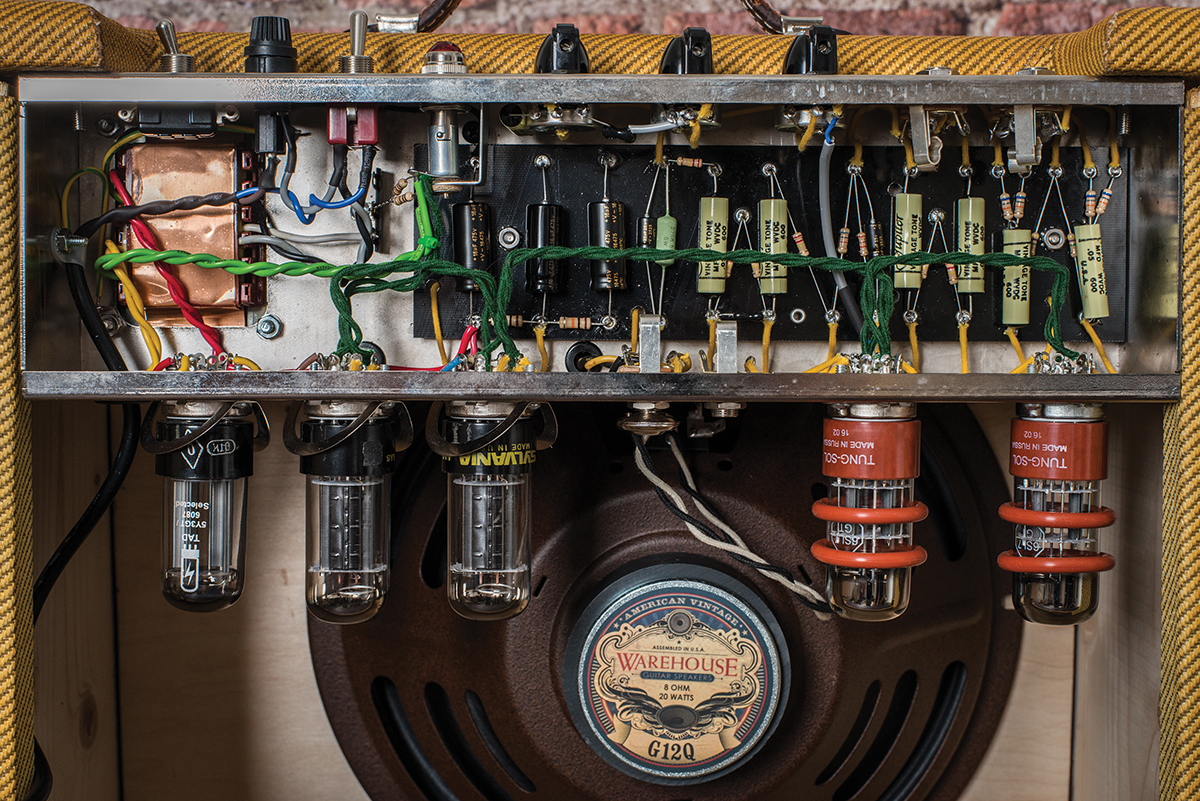 It’s reminiscent of a primitive fuzz tone, maybe with slightly starved transistors – a very cool retro tone. It’s not necessarily the kind of sound you’d use all the time, but the lo-fi rasp is a dead ringer for the 5A2 Princeton that inspired Fantana to build his own version.
At jam sessions, it can be hard to hear yourself clearly if you’re using the 5TV with another guitar player or dense-sounding backing tracks. We are more enamoured of it as a recording amp on those occasions when a ‘special effect’ is required, or for low-wattage retro tones when playing unaccompanied.

Does the Rift Tweed 15TV actually sounds like a vintage 5A3? With the thick and chewy midrange, sweet but clear treble and creamy breakup all present and correct, it does bear a very strong resemblance. There is a minor difference in the low mids, where the 15TV has a bit more girth. This fattens the tone somewhat, but it loses some of the evenness of frequency spread that we get from our 5A3 loaded with a Celestion Blue.

Swapping speakers does level the playing field and further demonstrates how close the 15TV is to the original. It doesn’t quite match the vintage 5A3’s airy harmonic sheen and the overdrive texture is a tad grainier, but we’re really splitting hairs now, because most of the essentials are there. 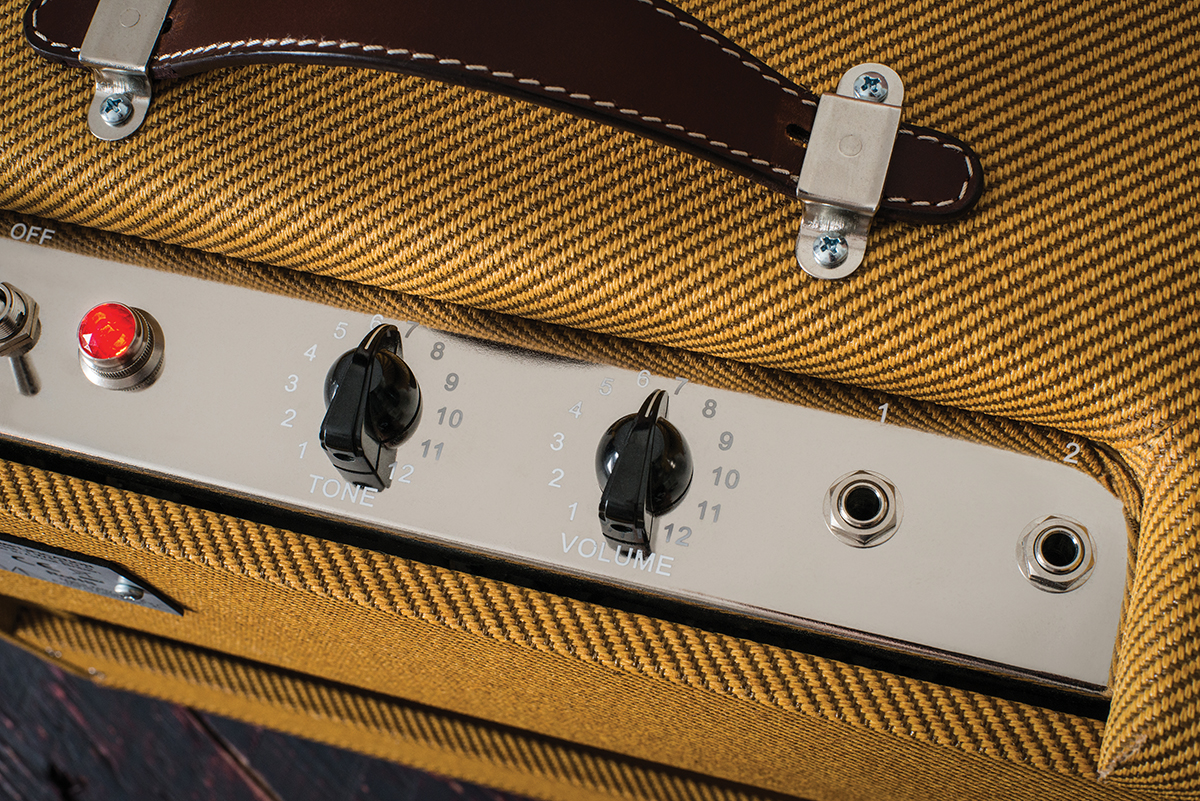 With it’s lower 92Hz resonance frequency, the G12Q immediately lessens the 15TVs low-mid thump. With semis this helps you to crank the volume up a little more before the onset of feedback, but you may miss the bolstering effect of the Black & Blue with single coil solidbodies. We hear a bit more midrange bark and compression with the ceramic, along with a slightly rougher, retro rock ’n’ roll quality; compared to both alnicos, it’s throatier and there’s less overall volume on tap.

Each 12-inch speaker provides a variation on the theme of harmonic richness, woody and chiming cleans, and overdrive that approaches a 5E3 for sheer heaviness and sustain but never strays into edginess or harshness. It’s certainly a ‘vintage’-toned amp, so you can get country cleans, a touch of grit for rockabilly, or all-out Chicago blues meltdown. 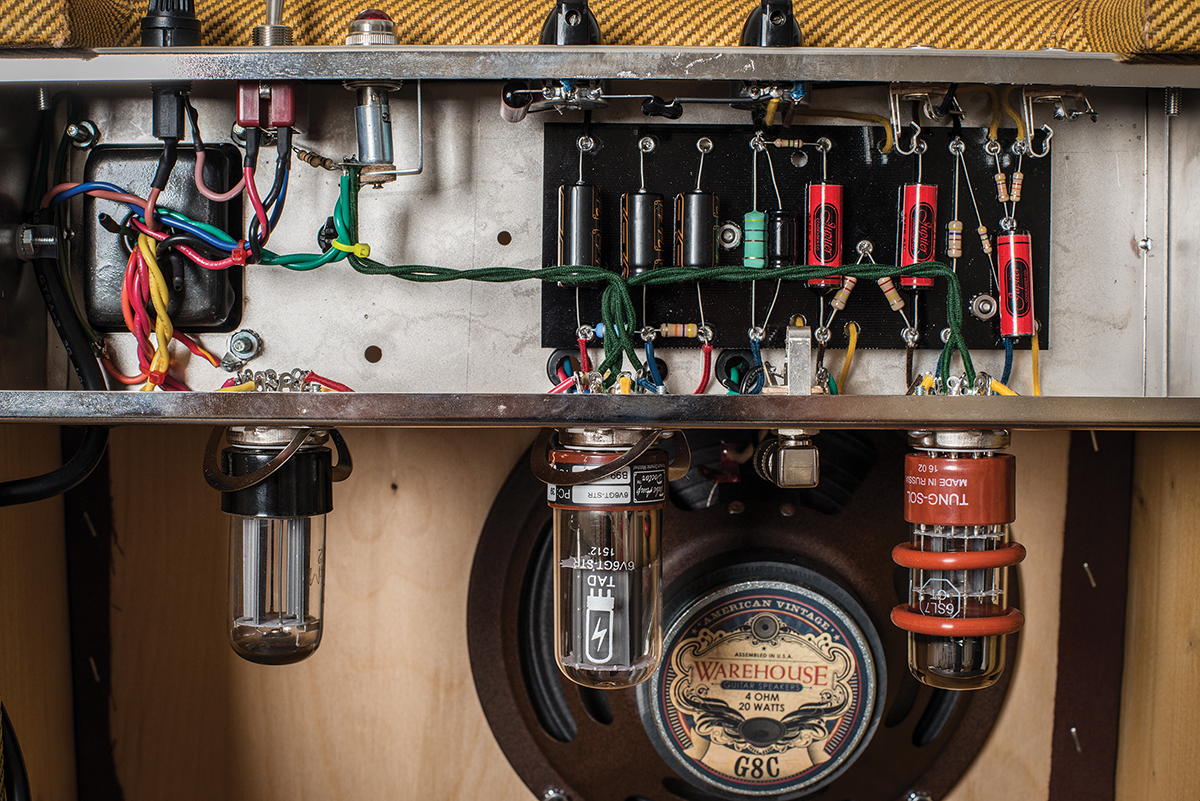 Even if you don’t play in those styles, the 15TV is an amp that simply delivers great tone. It has a fuller and richer midrange than most circuits can manage, combined with a dark sparkle and the sort of player friendly touch response that will make you want to ditch those pedals and get straight onto the grid.

Unlike later tweeds, where the extended treble ensures that input selection is a meaningful choice, we find ourselves using the 15TV’s number one input on the ‘bright’ channel exclusively for maximum brightness and sensitivity. On the 5TV the inputs are configured more as a mixer than high and low, although one has a subtle treble roll off. Again we go for the brightest option.

Early tweed circuits have a sonic signature that won’t suit every guitar player. By so closely replicating those characteristics the same can be said about Rift’s Tweed 5TV and 15TV, but this is a compliment rather than a criticism. If you prefer a different speaker brand then it can be changed later or factored into the purchase price, but where it really matters Chris Fantana does it right, and these amps offer authentic vintage tone and high build quality at extremely competitive prices. 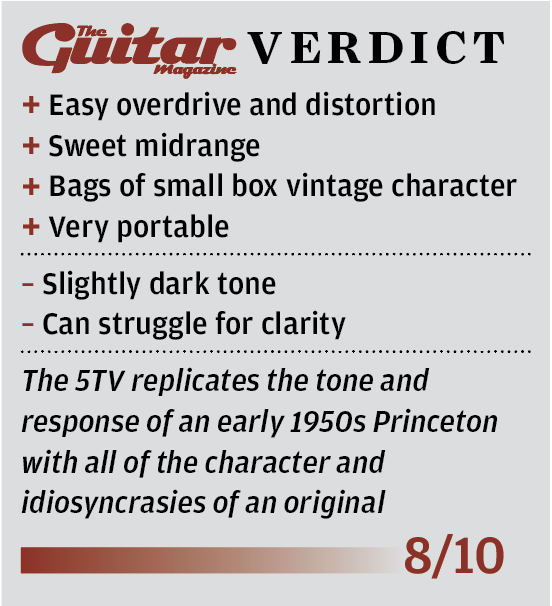 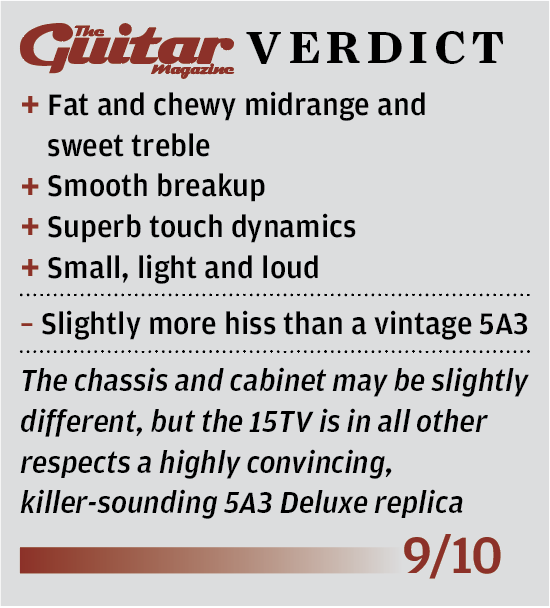