Fender’s V-Front cab was so complex to construct that it outsourced production before simplifying the design and bringing cabinet building in-house. 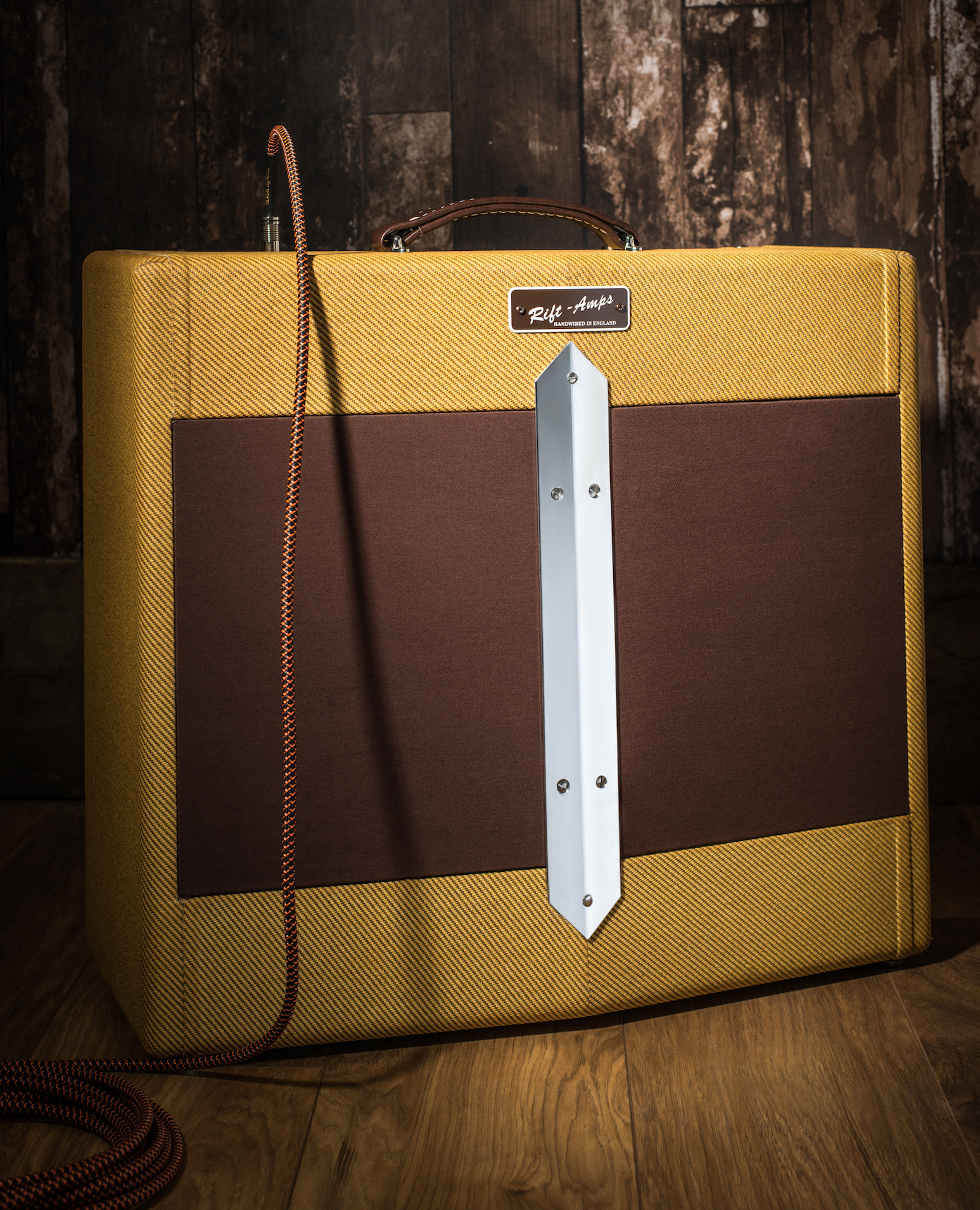 Fender’s V-Front Dual Professional and Super amps from the late 1940s and early 1950s are rare and valuable. With over 20 watts of 6L6 power, a separate power switch and a pair of 10-inch speakers, they were well ahead of their time, and historically significant. However, due to the structural complexity of the cabinet that gave it its nickname, V-Front replicas have hitherto been even rarer than the real thing.

We have been aware for some time that Chris Fantana of Rift had a replica in development and the result is the Tweed Vee. With a pine cabinet reconstructed from measurements and plans taken from an original Dual Professional, the speakers are mounted on individual baffles, each firing outwards at an angle.

To maintain a competitive price-point, the chassis is generic rather than an exact replica, but inside there’s a bona fide 5B4 circuit with octal preamp valves, yellow Jupiter capacitors and custom-wound transformers hand-wired on eyelet board. It’s certainly built right, but does it sound right? 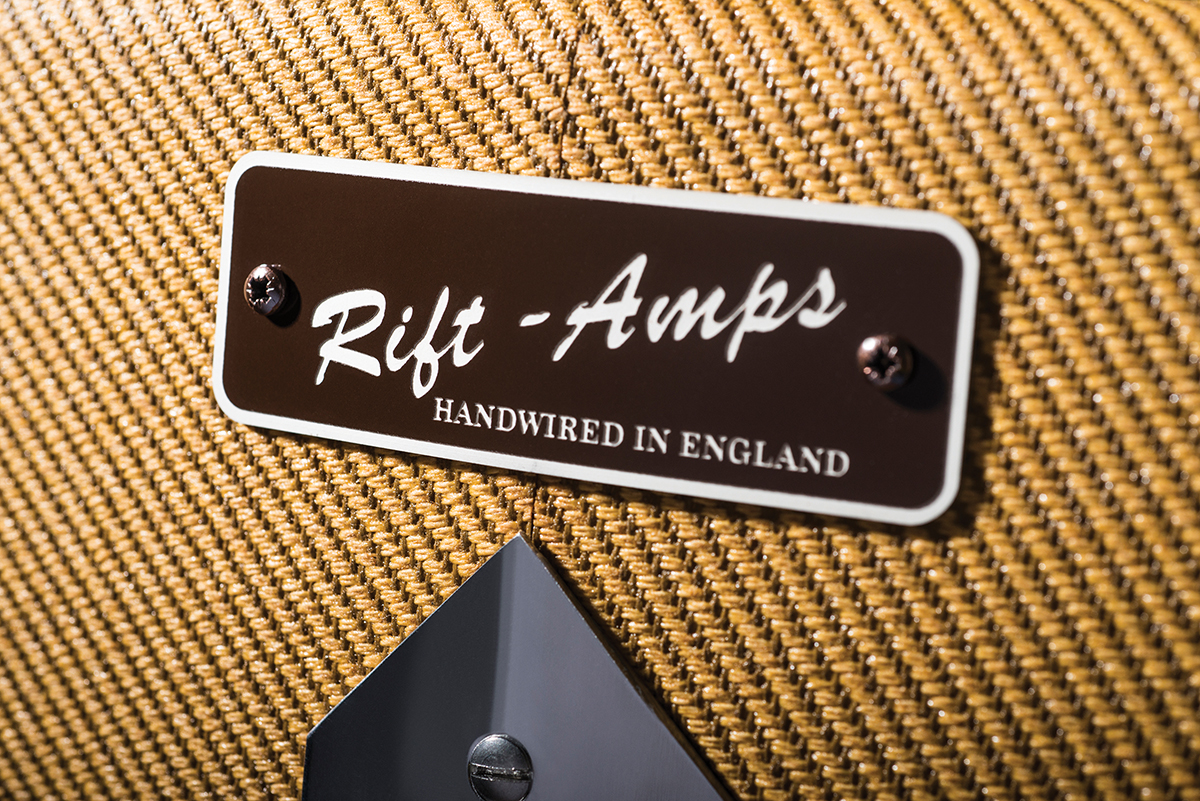 When we assess amps as players or, in our case, in Guitar Magazine reviews, we are by extension evaluating the speakers and cabinets, too. When it’s a mid-priced amp that’s fair enough because you fork out your money and get what you pay for. But when you’re contemplating bespoke boutique products such as this, there’s no need to settle for the basic package.

So why mention that here? In short it’s because the Tweed Vee has a split personality to go along with its split cabinet. Fantana makes a wide variety of tweed amps – the whole purpose of this project was to create an authentic sounding V-Front replica rather than something that’s been tweaked and in order to correspond to preconceptions about medium-power tweeds based on later designs.

So if your idea of tweed tone is the visceral thrill of harmonically dense overdrive, endless sustain and ethereal note bloom, that’s not what the Tweed Vee does with the Warehouse G10A alnico speakers that it arrives with. Instead the tone is darker, woodier and thicker in the mids. There’s a pronounced honk too and when you plug in a Tele, Strat or Gretsch and play at low to medium volume, you get the sense that it’s the way Leo Fender intended this circuit to be used. We’re talking authentic rockabilly, Western swing, jazz and old-school country lap steel. 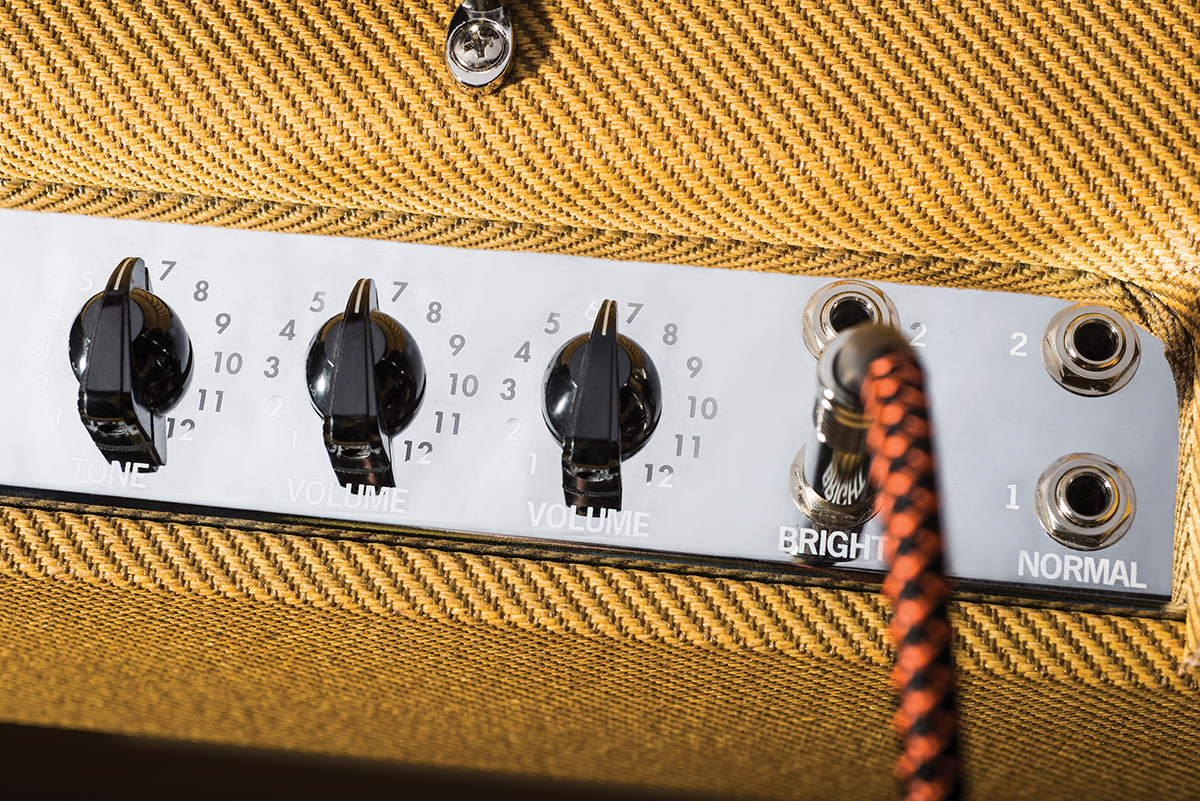 Crank up a little and the mellowness gives way to a grainy overdrive that blurs the edges of notes and softens the low strings. The Tweed Vee seems far happier with single coils because P-90s and PAFs introduce a roughness that some ears may find a little abrasive.
Highlighting this breakup texture and the Tweed Vee’s soft but slightly veiled treble is more an observation than a criticism. Regular readers may be aware that this reviewer has owned a 1951 Deluxe for many years and can report it’s very much how his amp sounded before he began modding it – albeit at lower volume with a lot more boxiness. Fantana was shooting for early 50s tweed tone and he’s bang on target.

Chris stressed that the Warehouse G10A speakers have an authentic 1950s American voicing and although they sound very convincing to us, their tone may be a little too niche for general playing duties. There’s a nagging sense that there is more going on with this amp than we are able to hear through these drivers. 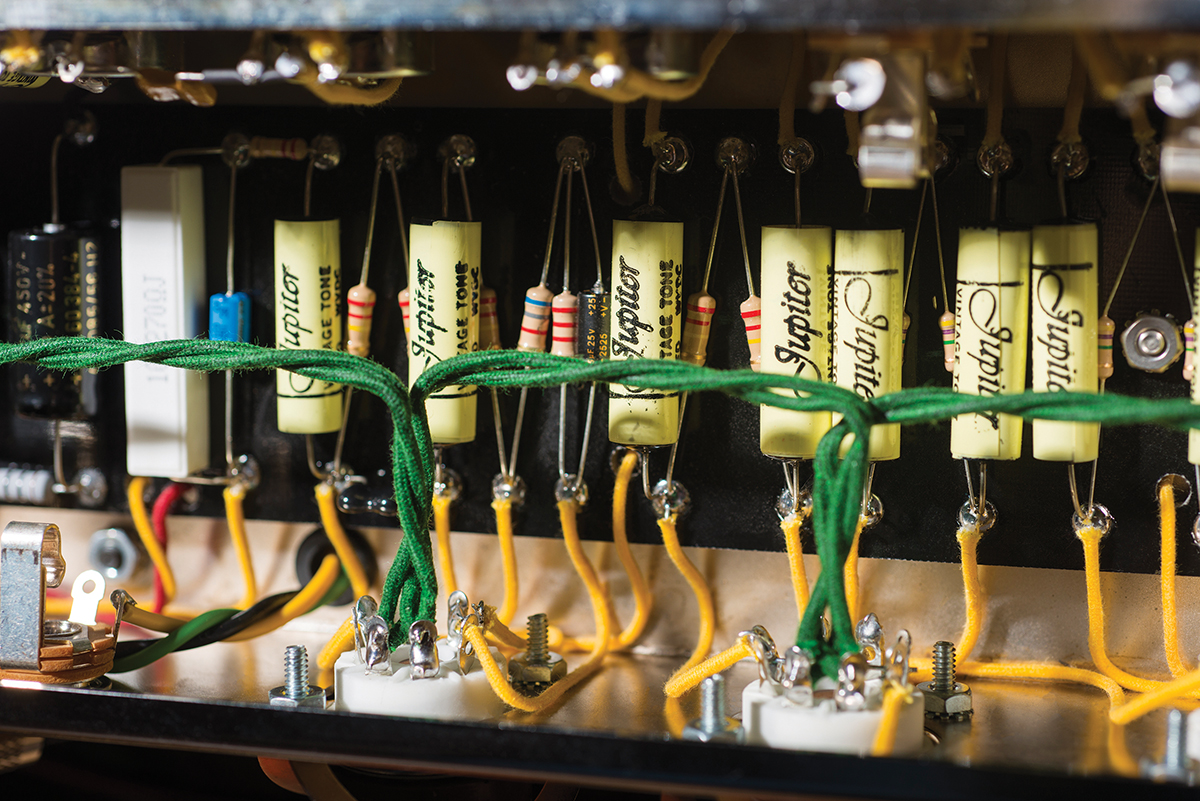 Fortunately our review amp also came with a spare set of Warehouse G10Cs, which are the Tweed Vee’s cheaper stock speakers. Rather than install them in the V-Front, we put them in an AC10 cabinet to make comparisons and it’s like playing through a different amp.
The V-Front gets louder, brighter and more articulate. With added ceramic aggression and bite, the breakup is also smoother and sustain is enhanced. The overdrive, sustain, note bloom and dynamics we suspected might be there are revealed in all their glory and higher output pickups present no problems.

Without wishing to veer towards a speaker review rather than an amp review, it’s clear that this amp’s tone very much depends on speaker selection. Given the magnitude of difference with the ceramics, we install them in the V-Front cabinet and the resulting tone reveals the essence of this design. 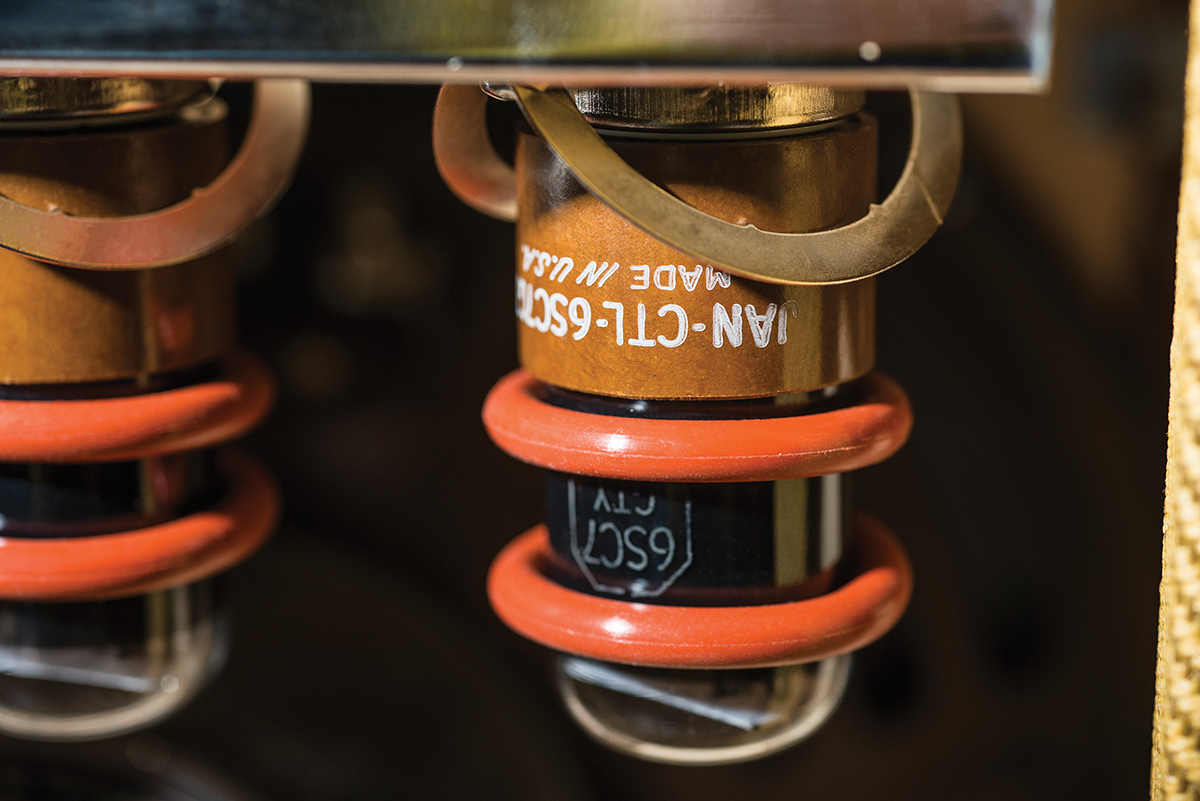 There’s no overbearing darkness here, but the upper midrange aggression that is so apparent in the AC10 cabinet is sweetened to a more compressed chime. The bass is solid, deep and punchy, but the most startling revelation is the return of the chewy and thick midrange. It turns out the V-Front cabinet’s unique colouration defines this amp’s tone every bit as much as its looks.

And what a tone it is. Based on our experiences with an original V-Front, this is what we’d been hoping for all along. The smoothness of the overdrive, the shimmering clarity, piano-like bass and the ability to make any guitar sound its absolute best.

The alnico-loaded version is resolutely old school and has considerable but limited appeal. But with other speakers, the Rift Vee has the potential to be pretty much the perfect tweed amp – more so than the TV Deluxe and Pro. Played clean we get shades of Hendrix and cranked up, it nails the rude, mid heavy grind heard on ZZ Top’s Antenna – famously recorded with one of Billy Gibbons’ many V-Fronts. 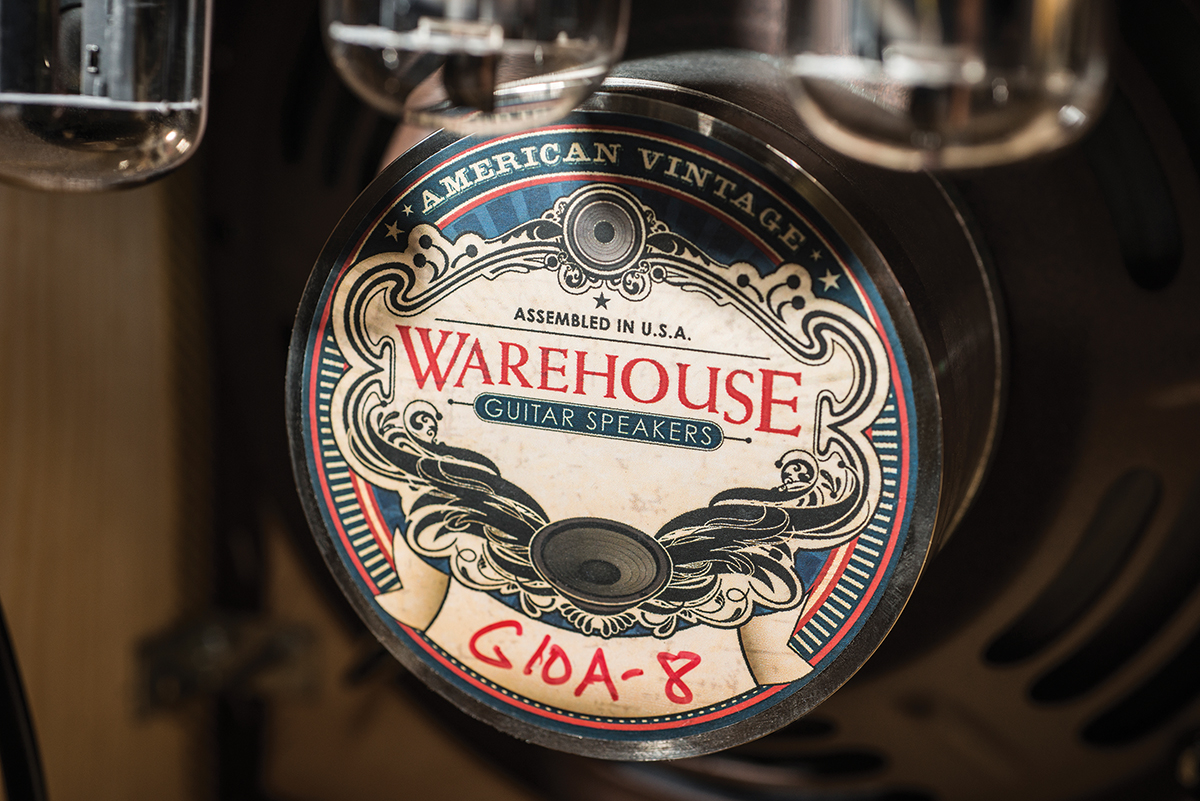 The octal preamp mids are more full and sonorous than the thinner and fuzzier tones of later tweed circuits, so it’s ironic that they are arguably a better match for modern speakers. Over 20 watts of power gives you early 50s tone at practical gig levels, with lively transients and a refreshing absence of small cabinet boxiness. But you can swap the rectifier for a 5Y3 and the power valves to 6V6s to lower the output if needs be. Chris Fantana has put a lot of time and effort into researching this amp and putting it into production, and we think he’s done an incredible job. 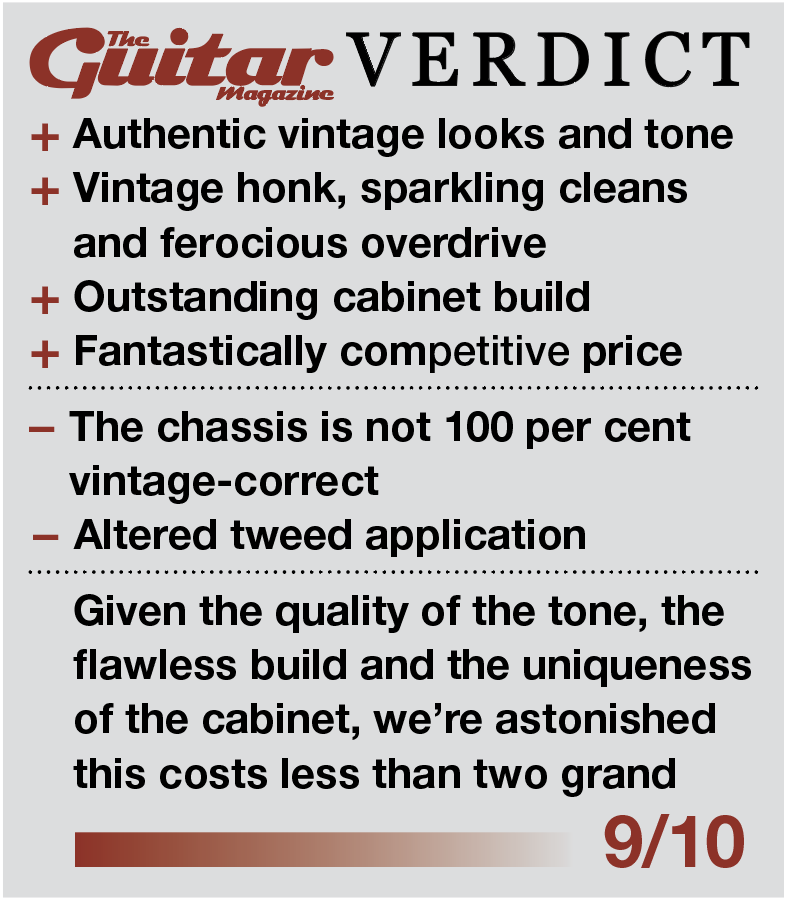