A Dennis Fano guitar for the masses? We sample the fruits of an interesting collaboration… 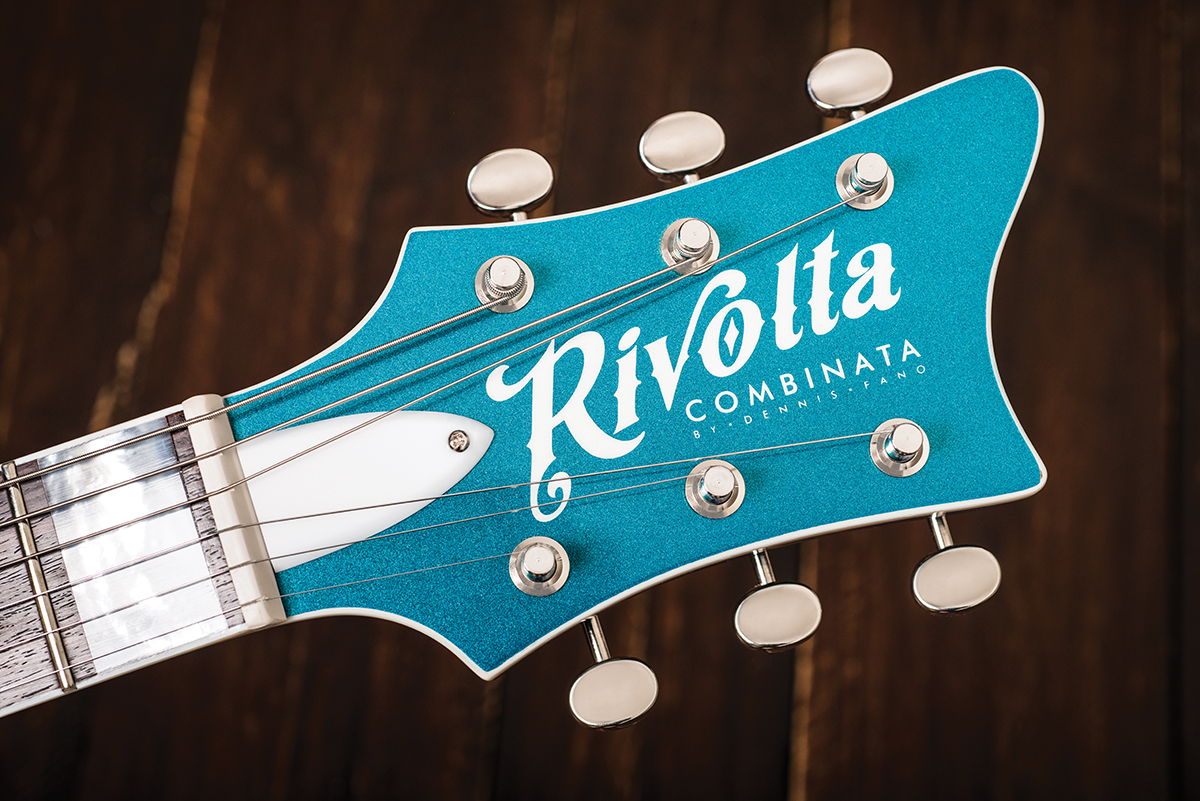 What’s in a name? You’ll doubtless recognise that of Dennis Fano, the eponymous founder of Fano Guitars and the man who has more recently been building wonderful offset-body electrics in Fleetwood, Pennsylvania under the Novo Guitars banner.

The Novo instruments we’ve played have all been very difficult to put down. Yet, although Dennis Fano is often to be found residing in the uppermost branches of the boutique-electric tree right now, that hasn’t stopped him seeking out a way to make his designs more affordable and accessible to the guitar-playing public 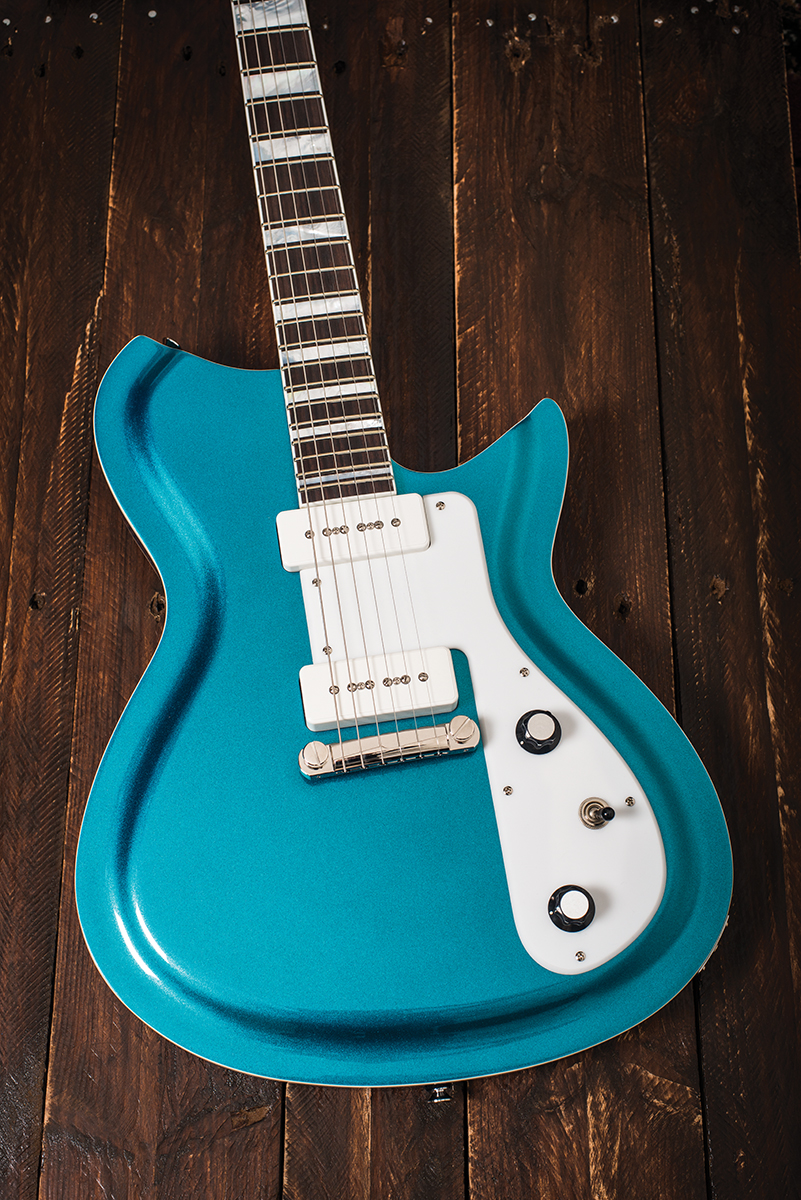 In partnership with Mike Robinson of Eastwood Guitars – a company known for its affordable recreations of vintage pawnshop and catalogue guitars by the likes of Harmony and Airline – Fano’s latest venture finds him designing instruments for production and distribution via Eastwood’s existing facilities and distribution channels.

‘Novo’, from the Latin novus, means new – and Fano’s new Eastwood-made electrics are branded with a name with a similar inspiration behind it, as Dennis explains: “Rivolta is the Italian word for ‘revolt’. The plan for Rivolta is to do fresh new takes on some of my earlier work. We call it ‘evolutionary design’.”

If you like what you see on these pages, you’ll be pleased to know that the Combinata is merely the first model in the new Rivolta line. Fans of Fano’s back catalogue and students of Rickenbacker’s 1950s output will find the outline familiar: “It is the not-too-distant cousin of my RB6 design,” says Dennis. “Combinata is Italian for ‘combination’ – I chose that name because the inspiration for the RB6 was the Rickenbacker Combo 800.

“The RB6 body is fairly diminutive compared to most solidbodies,” Dennis continues. “So I wanted to give the Combinata a slightly larger and slightly offset body. I want it to read Combo/RB6 at a glance, but I also wanted to give it a little movement and make it more ergonomic.” 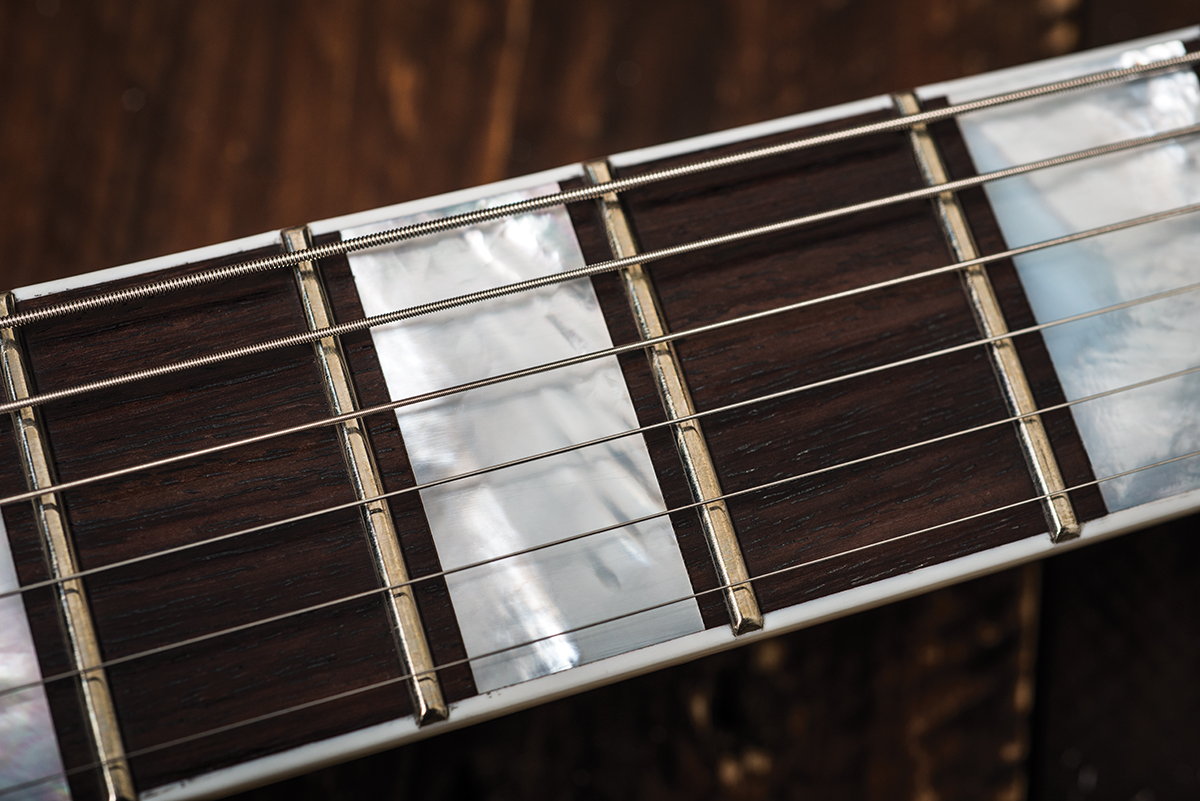 How does the process of designing instruments that are manufactured in South Korea compare with overseeing bespoke builds in a small workshop environment? “Partnering with Mike Robinson and working with his team at Eastwood Guitars has been great. They’ve been working with the overseas factories for many years, but it’s brand-new territory for me.

“Initially, I figured that I’d have to make a few compromises in order to get these instruments made, but that has not been the case. The process has actually been a lot of fun and the build quality of these guitars is excellent. I am really impressed with the look, the feel, the tone and the playability of these guitars.”

With its dramatic, sweeping German carve, the double-bound Combinata is a cool-looking creature, presented here in a metallic Adriatic Blue finish that’s probably closest to Ocean Turquoise in terms of the vintage Fender/DuPont colour palette. We suspect that the level of visual bling may polarise opinion – just look at those iridescent, genuine mother of pearl fretboard inlays – but the less retrofuturistic colour scheme of the maple-top Autunno Burst model is well worth checking out if you are more conservatively minded. 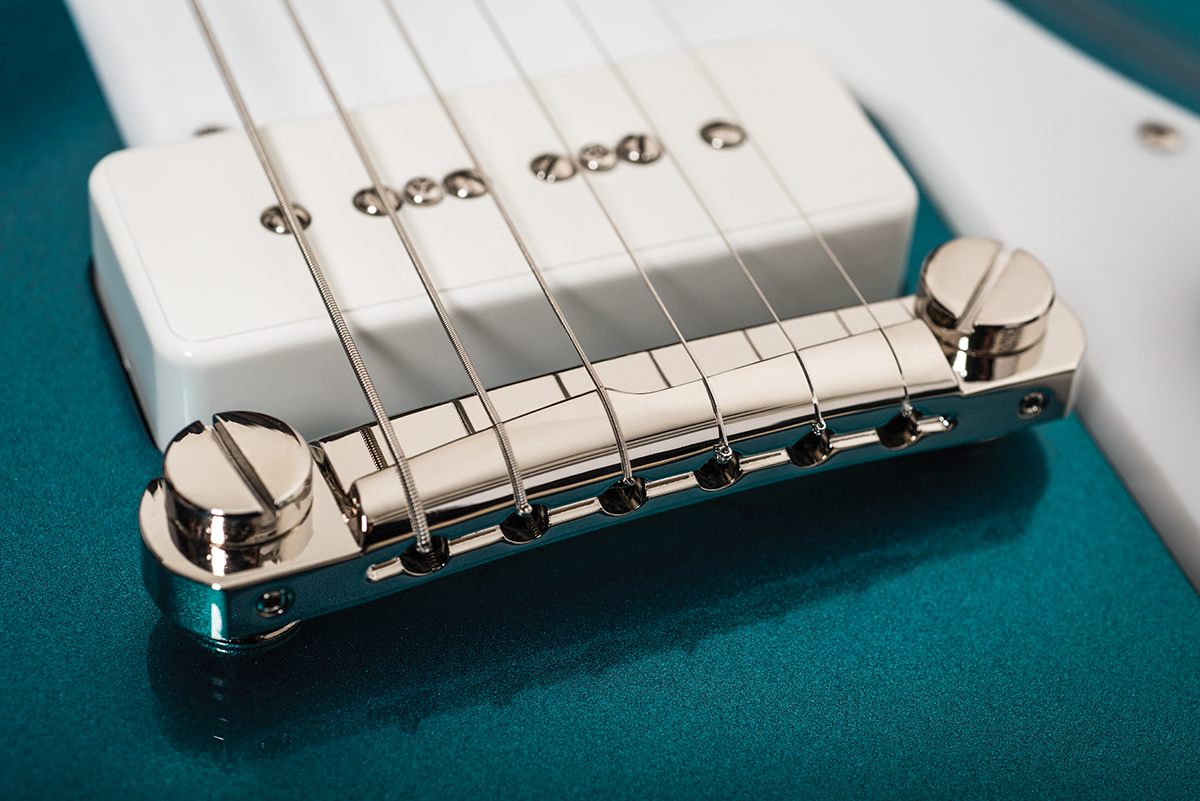 Removing the acrylic scratchplate reveals full-size 500k volume and tone pots and a decent standard of wiring. The Korean-made three-way toggle switch is stamped ‘JA’ on the side of the box that houses its electronics. It’s an economy option and although its operation is a little stiff, this will at least help prevent a stray right arm from accidentally switching pickups at an inopportune moment. The Novanta P-90 pickups themselves are less of an off-the-shelf solution. Fano says he was “able to spec the output and magnets to my liking”.

Strapped-on balance is excellent thanks to the upper strap button position and the sizeable solid section running through the centre of the chambered mahogany body. Access to the highest frets is slightly impaired, but at least there are 24 of them – players used to a 21- or 22-fret neck may not feel the need to head that far north anyway.

There’s something about a wrapover bridge and a pair of soapbars that gets those in the know excited – for all the Combinata’s slightly kitsch stylings, plug this into a non-master volume amp such as a tweed or old Marshall, crank the amp until it’s loud and overdriven and you’ll find yourself grasping the reins of a muscular rock ’n’ roll animal.

It sets our pulse racing – it really does – but also stays well behaved enough in terms of noise for proper stage use. Anyone who has seen footage of The Who at The Isle Of Wight or heard Live At Leeds will know that a pair of P-90s will also hollow out when you roll back the volume, giving you access to cleaner, almost acoustic-sounding tones great for Townshend-style strumming. It doesn’t do the near-supernatural pseudo-acoustic upper harmonics of a 1950s Gibson solidbody loaded with P-90s, but it would be unfair to expect that from a brand-new instrument at this price point.

Compared directly to one of Dennis’ high-spec Novos fitted with Amalfitano P-90s that we had on hand during the testing process, the Combinata actually shouts slightly louder, with more grind and attitude – it’s not quite as refined, but isn’t a voice that feels like any kind of compromise. 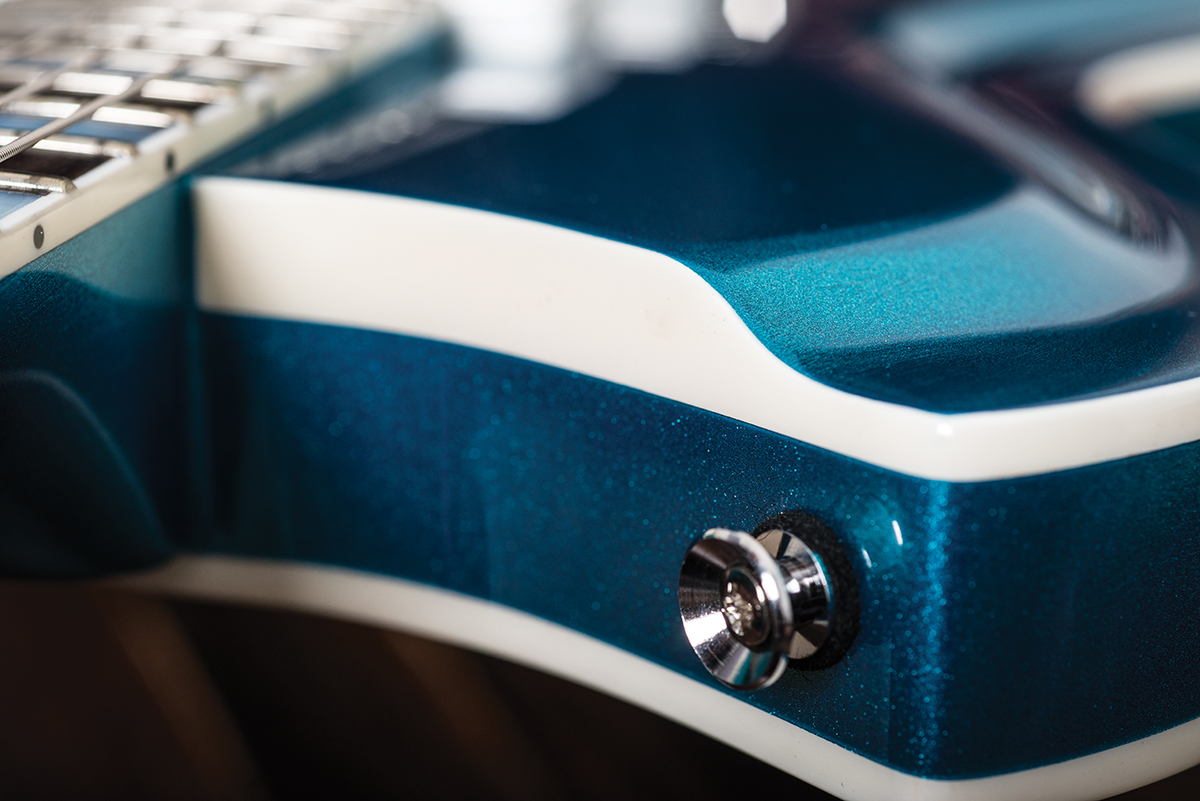 Winding the amp back into cleaner territory, with added spring reverb the hum-cancelling combination of both pickups offers a really authentic voice for 60s beat styles and the neck alone is mellow and smooth and suited to fifties comping; just don’t expect liquid sustain for soloing without a helping hand from extra compression and gain.

If you’re wondering whether this is a cheap Fano or an upscale Eastwood, the answer is… in many ways, it’s both. The poly finish feels more like standard Eastwood fare and it’s undeniable that what you get for your money from Dennis’ high-end instruments is a more crafted, organic feel with more personality and attention to detail. However, for a third of the price of a Novo, it’s hard to complain about an instrument that, aside from a little scruffiness around the fingerboard binding, has been built very cleanly.

Overall, the first Rivolta model represents a hugely successful collaboration that brings Dennis Fano’s design to a price point that a much wider audience can access – this can only be a positive, so we look forward to seeing what shape the next Rivolta takes. 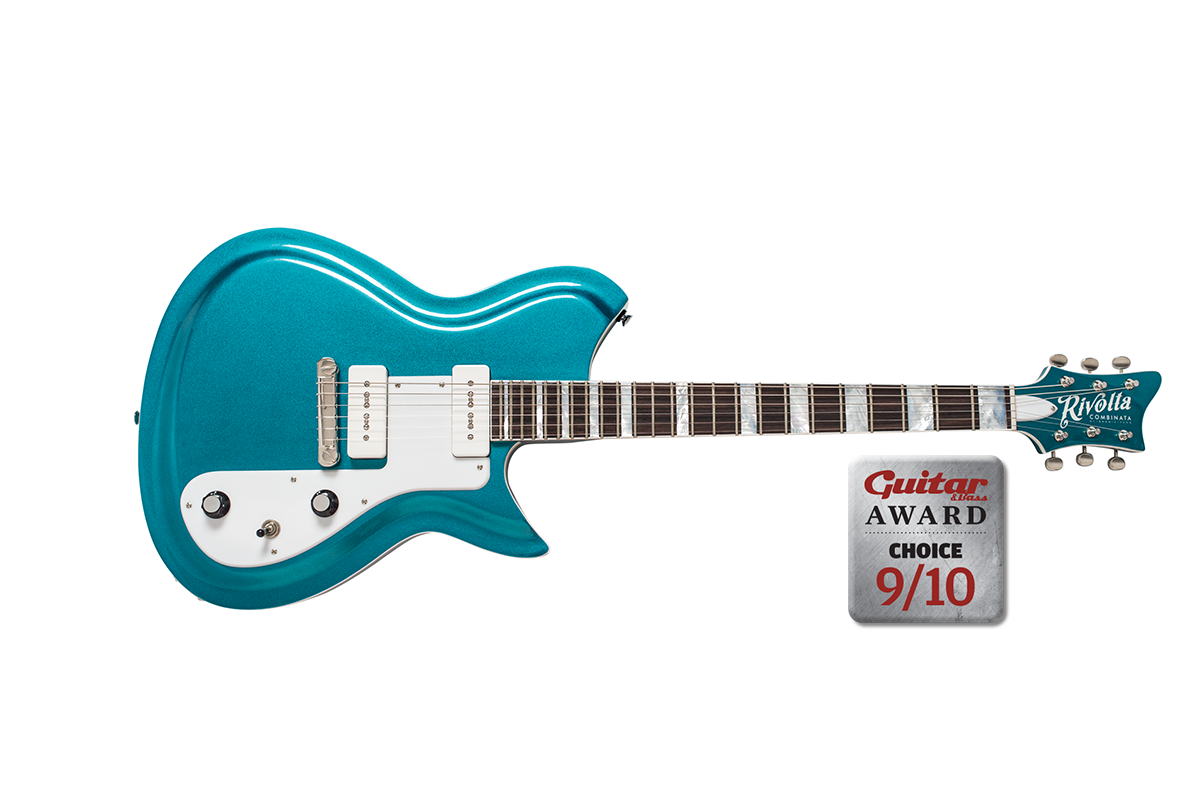 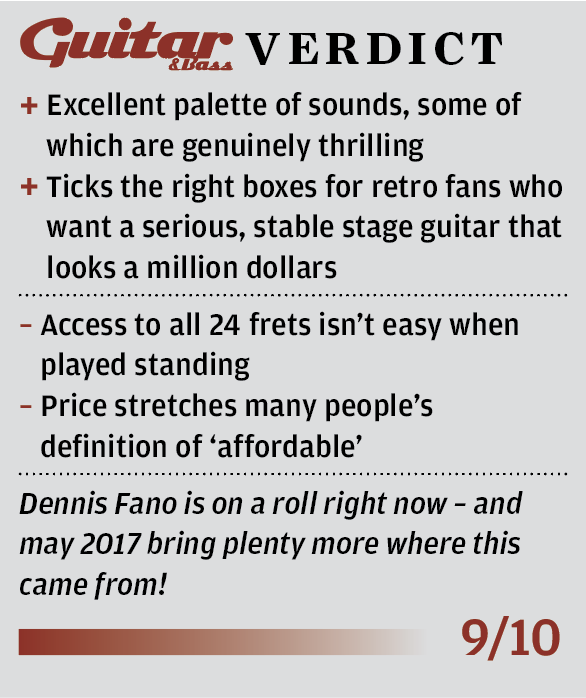