From the cream tolex right down to the writing on the badge, Roland’s Blues Cube echoes vintage amps from a certain other brand – but it sets about its work in a way that’s entirely modern. 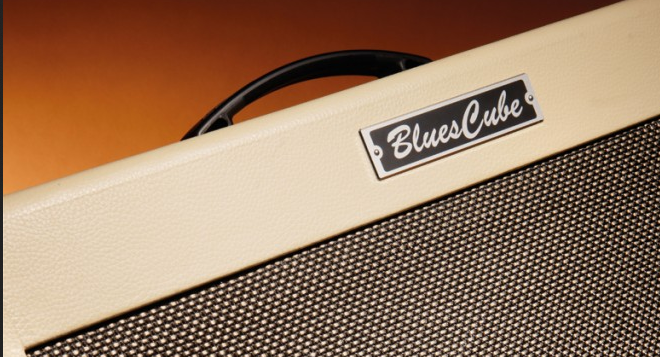 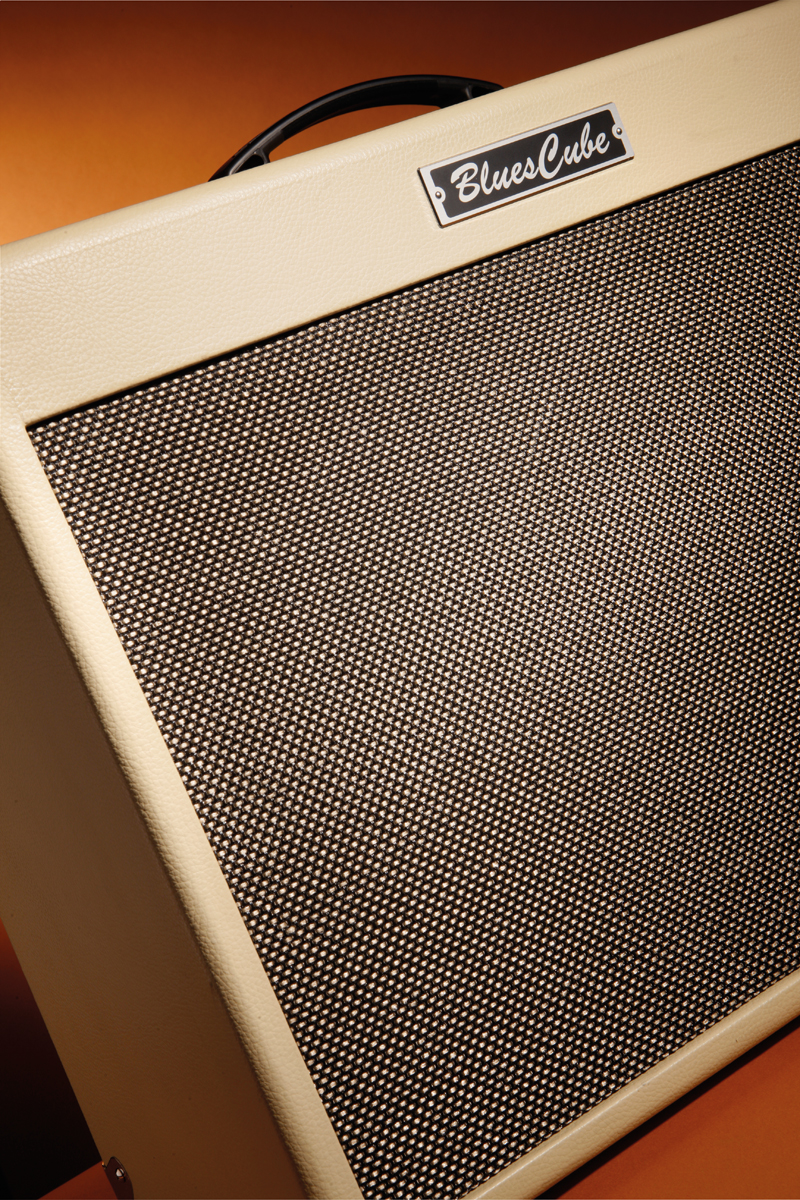 Blues guitar – for good or bad – can be something of a traditionalist’s world, and in the past, amplifiers noted as the finest for the genre have most often contained numerous glowing bottles that burn the fingers of the unwary. Roland’s new Blues Cube promises ‘genuine tube sound and response with modern reliability and easy portability’. It’s certainly portable at 16kg/35lbs, but the the Blues Cube doesn’t contain any valves at all. Instead, it uses ‘Tube Logic’ – a technology based on digital signal processing which the company says is more advanced than regular digital modelling.

Before we look at the Blues Cube in detail, there’s one more thing to mention: as we go to press, Roland has just announced a collaboration with the infamously discerning tone hound Eric Johnson. Apparently Roland’s Tube Logic very much sparked his interest, and this has resulted in an upcoming EJ Tone Capsule. Based on the sounds of Johnson’s favourite Marshall and Fender amps, it’s basically a modification unit that plugs in under the chassis to change the Blues Cube’s circuit characteristics to Mr Johnson’s tastes. Unfortunately, the new EJ module wasn’t available for us to sample at the time of this review.

Back to the core amp. Tube Logic, says Roland, attempts to reproduce ‘the inner workings of the revered tweed-era tube amp in every way, from guitar input to speaker output’. In other words the Blues Cube is all about ’50s Fender amp tones from clean to the grungy and all points in between.

Roland has focused on preamp and power amp distortion characteristics as well as power supply compression (aka ‘sag’). They have restricted the onboard effects to reverb and tremolo; if you want more, you can use stompboxes or connect line level effects in the FX loop.

Chickenhead knobs may be obligatory for tweediness, but Roland gear always gets black knobs with metal tops; there is just one mini-chickenhead at one end, and it switches power from 80W to 45W, 15W and 0.5W.

Designated Clean and Crunch, both channels feed into a master volume. The Clean channel has a single Volume control but Crunch has Gain and Volume. The channels share Bass, Middle, Treble and Presence controls but there are individual Boost and Tone switches. Of course there’s a Channel Select switch, but the Dual Tone switch is the big thing.
It allows both channels to be used simultaneously – as you might combine clean and overdriven amps when recording. Tremolo and Reverb knobs control the intensity of the effects and there’s a Tap switch to set the speed of the tremolo along with an EXP loop switch for the FX loop. 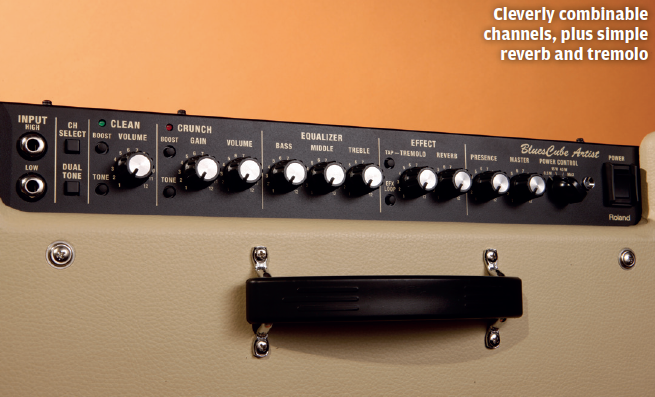 Around the back are sockets for the FX loop, line output and phones, plus jacks for tremolo, loop and channel footswitching plus a jack for the optional GA-FC Foot Controller, which covers all switching requirements in a single unit. Lastly a USB socket enables the user to connect to a PC for direct recording with speaker simulation on a variety of recording platforms.

All this is housed in an open-backed poplar cabinet with blonde tolex, metal corners, an attractive grille cloth and a moulded plastic handle. Inside there’s a ‘custom tuned’ 12″ speaker with a retro label reading Roland V-12 80.

Sounds
Set the Blues Cube to 80W then crank up Master, and the Clean channel has plenty of headroom, but to hear what the DSP is all about means setting the Master and/or the Power control lower and exploring the effect of the Volume. As it’s raised, you hear a throaty overdrive starting to creep in; at first just a hint of warmth and girth, but this transforms into a touchy-feely sag which allows the Blues Cube to respond to playing touch much like a real tweed amp. 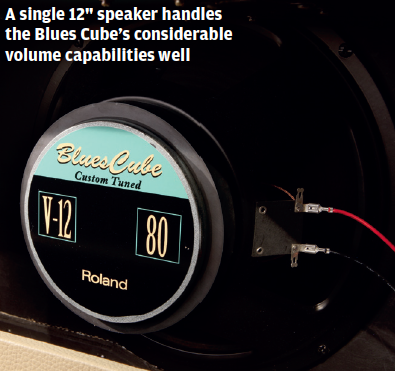 For low-power tweed amp tones combining rolled-back Treble and Presence with boosted Middle is the recipe, but you can reverse that to emulate Fender’s more powerful and sophisticated late ’50s amps. The Tone switch adds extra treble, which we found a bit too edgy with Treble and Presence set high, but it works very nicely to add a hint of sparkle on top of the fat mids of the ‘low power’ settings.

Although nicely touch-sensitive, the Blues Cube doesn’t quite respond to your guitar volume like the ‘real thing’. Rather than cleaning up quickly, overdrive is retained until about halfway down, though with a noticeable reduction in bass and low mids.

The Blues Cube even goes beyond tweed and into Blackface territory. This is particularly apparent when turning the midrange down and dialing in the reverb. With its ability to go from boxy ’50s grunt to late ’50s big box grind and ’60s-style country twang and surf, the clean channel gets our thumbs up for versatility and tone.

At equal levels, the starting point for the Crunch channel corresponds to the Clean channel with its volume control set about halfway up; overdrive is starting to fill out the sound, but Crunch’s core tone is a bit lighter in the bass and low mids and there’s a little more treble. 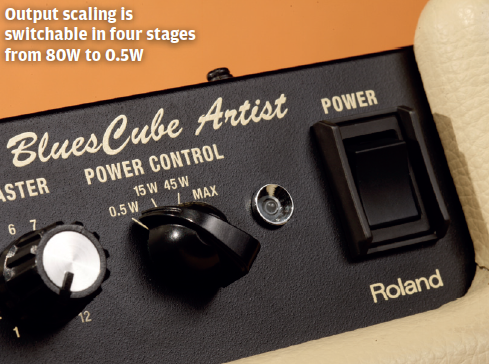 Turn Gain up a couple of notches and the low end fills out as the Crunch channel comes to life. We’re not sure which amp this channel was based on, but at high gain levels it’s tweed at meltdown. Although there are plenty of old-school overdrive tones, the Blues Cube pushes the envelope to encompass 1970s metal and modern rock sounds.

The EQ controls have plenty of influence, especially the Middle setting, which swings from scooped US tones to a more full-throated UK vibe. Essentially, it’s very easy to dial in a range of classic and modern drive tones.

The Dual Tone feature is the Blues Cube’s ace in the hole. Like many high-gain amps, the Blues Cube can sound compressed and slightly murky when heavily overdriven, but fading in the Clean channel introduces extra clarity and attack without detracting from crunch or sustain. It also fattens and focuses the low end.

Coming at it from the other direction, adding a soupçon of overdrive to clean tones makes the Roland Blues Cube more touch-friendly and increases sustain without adding obvious distortion (you can even hear that ‘bloom’ where notes hang on and the harmonics shift). As a specialised tweed modelling amp, the Blues Cube comes closest in Dual Tone mode.

Verdict
This amp is both loud and lightweight, and even without the yet-to-be-released EJ Tone Capsule it sounds very nice – and thanks to power scaling, a wide range of overdrives and the Dual Tone facility, it’s so versatile that players should be able to dial in sounds they can enjoy at almost any volume. 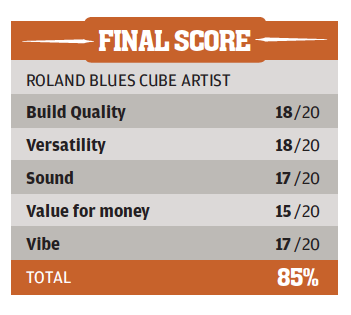