Sandberg’s striking new boutique bass is named after a classic motorcycle engine. Gareth Morgan takes it for a ride…

We first encountered Sandberg basses 12 years ago, and since then we’ve been treated to regular additions to the company’s catalogue, most recently in the shape of the splendid California T and V Series instruments. Now, Holger Stonjek and the team have developed a brand new model, one that’s designed for those with rock ’n’ roll in their blood, and called it the Forty Eight. 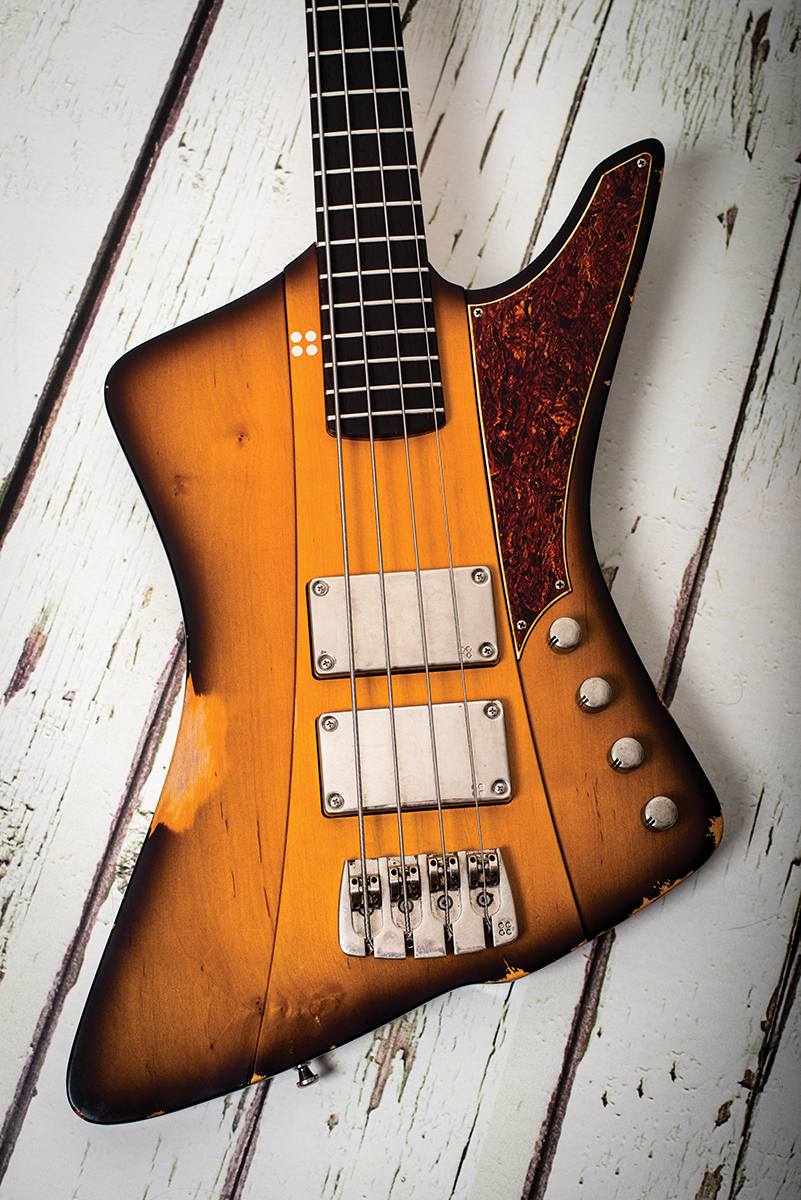 Its moniker pays homage to an iconic motorcycle engine produced in 1948 by Harley-Davidson, a brand synonymous with the golden era of rock ’n’ roll, and the design intelligently evokes two similarly iconic rock basses. The upper half is reminiscent of Gibson’s classic Thunderbird, with fin-shaped rear bout, stumpy front section and no cutaway. The bottom half, with its tortoiseshell scratchplate-adorned dorsal fin horn and triangular rear bout, has the spikier Explorer to thank for its genesis. It’s the expert combination of both vibes, with subtly added curves, that makes this instrument so striking, and the sublime aged finish of our review model supports that vibe very nicely.
The central section is a carved ridge that fans out to the rear and houses two Sandberg pickups with metal covers – a Powerhumbucker (front) and Splitcoil (back) – as well as Sandberg’s 3D bridge. These, and the rest of the hardware, are aged classily.

Sandberg has utilised the same supremely playable Canadian hardrock maple neck as on the California Series, with six-bolt retention system. This, together with California Series headstock equipped with the company’s lightweight aluminium tuners, ensures the Forty Eight displays better balance than the models that influenced its design. The fingerboard is rosewood and carries 22 expertly seated medium nickel frets, with position markers along the top edge only.

We get active electronics, featuring Sandberg’s own preamp that hitches up the Powerhumbucker/Splitcoil combo to controls numbering volume, balance and a two-band EQ.

As always with Sandberg’s boutique basses, various elements are customisable, including fingerboard wood and inlays, hardware and pickguard colours and finishes.

If you really fancy one of these basses and you’re unfamiliar with the genus in a playing sense, be aware it takes time to get used to how they feel. The tonal story starts with decent width, and a pleasing growl at the E string and a nice aggressive vibe across the neck. The nasal edge isn’t excessive and helps the Forty Eight in the audibility stakes. 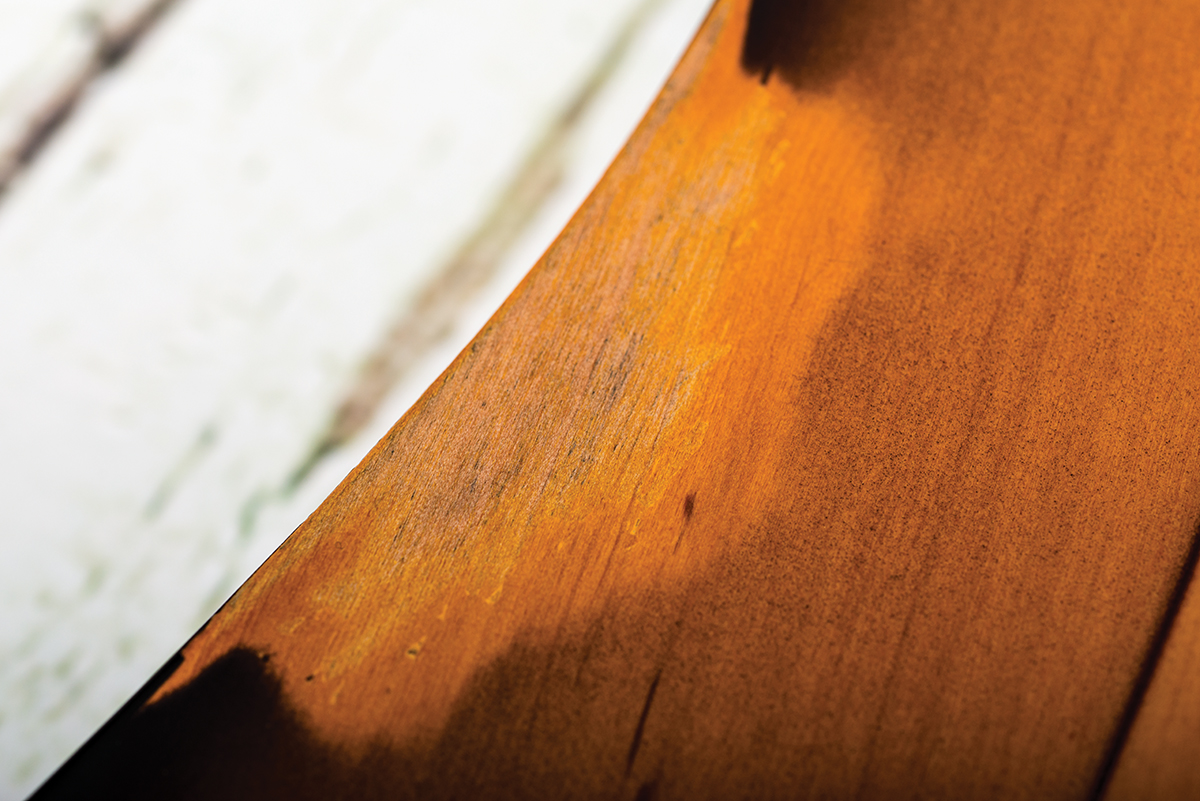 Highs don’t explode, but you wouldn’t expect them to, and they’re plentiful enough for decent cut and bite. The front pickup is thuddier and more P Bass-like, and the Splitcoil spits out a barkier tone that’s tight and snappy. Introducing EQ is a positive move, as the additional thump from increased bass creates a wide, silky retro-rock tone, making the funkier bridge option more practical and aggressive and smoothing out the nasal edge in twin mode without killing definition. Boosting the treble gets you sharper note edges without excessive clank, the wiry quality of the neck sound proving especially enjoyable. All in all, there’s a great deal of fun to be had… 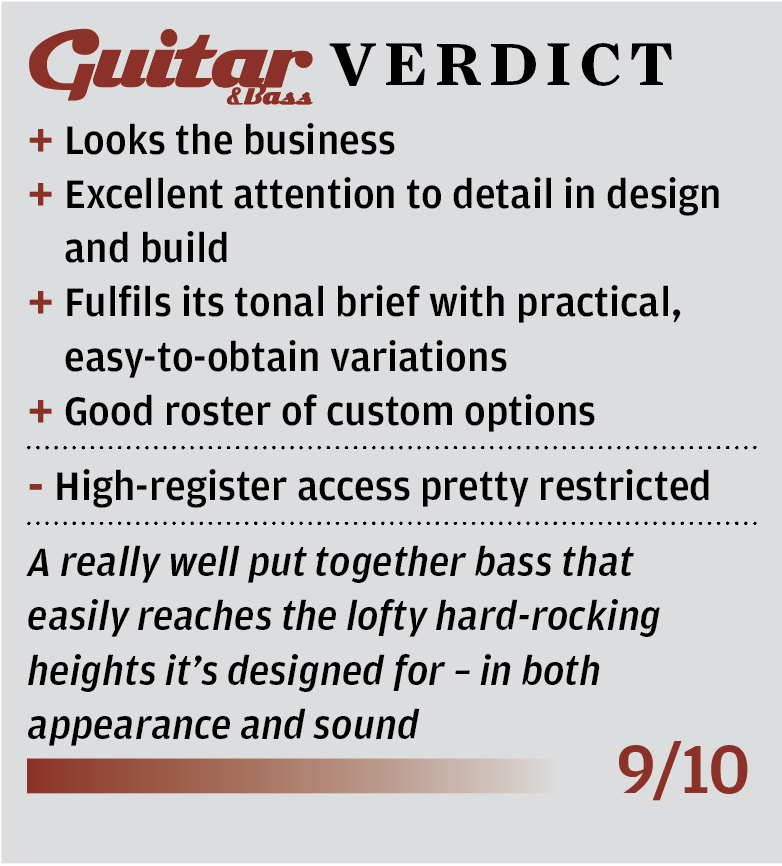