Still slightly under the radar, Satellite amps offer great value in the hand-wired world, but does the Neutron live up to its promise as a boutique bomb? 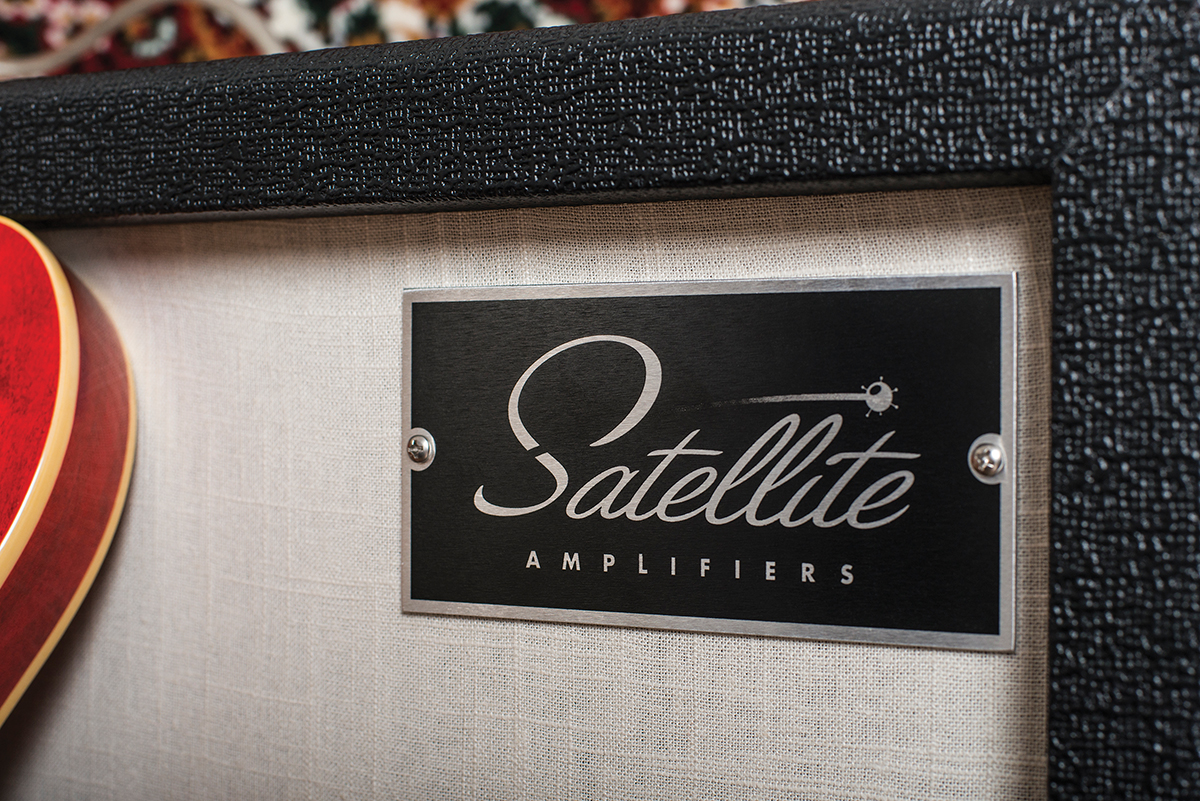 Based in San Diego, Satellite amps main man Adam Grimm specialises in no-nonsense circuits that have found favour with players as diverse as Social Distortion’s Jonny Two Bags, Counting Crows’ Dave Bryson and the late Walter Becker of Steely Dan. In addition, similarly stripped-down guitars and effects have recently been added to the brand’s catalogue.

This Neutron combo is brutally paired back, resulting in an almost industrial focus on functionality and barely a nod to decorative flourish. And it works: the visual contrast of the black tolex against the mid-century modern texture of the speaker cloth is pretty striking.

That said, the tolex application is a little gappy at the corners, and the rudimentary lettering on the brushed aluminium control plate and the parts outlet style handle and knobs create the impression of an amp constructed by a gifted garagista rather than a slick production facility. Even so, the hand-built vibe appeals and where it matters – inside the amp – things are pin-neat. 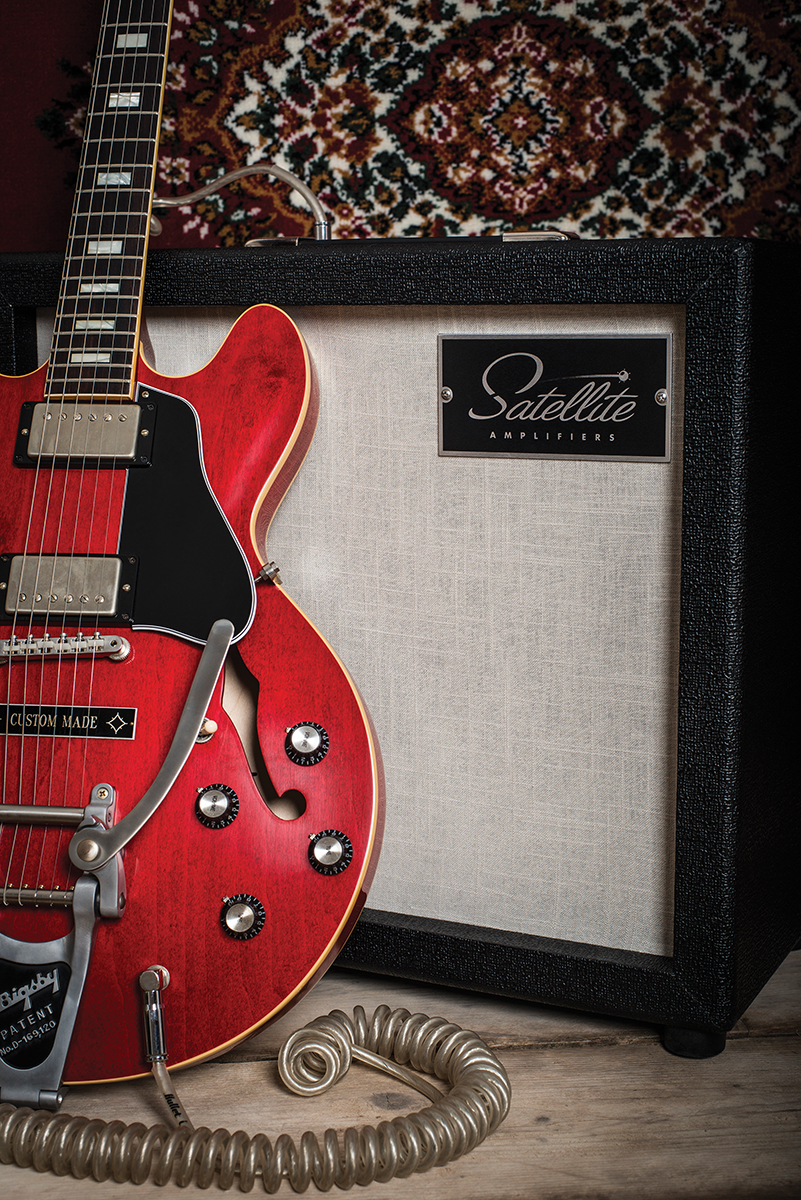 The cabinet dimensions are roomy for a single 12-inch Heritage Series Greenback and inside the chassis it’s a similar story. The transformers are made by Mercury Magnetics and tucked into the corner next to the pair of 12AX7 preamp valves (as far as possible from the power supply) there’s a diminutive turret board playing host to a handful of components.

Those resistors that carry the greatest burden are wire-wounds, but the rest are all carbon composite types. Where necessary, high-quality electrolytics have been fitted, and all the signal capacitors are Mallory 150 metallised polyester types found in so many classic guitar amps.

The aforementioned preamp valves feed into a pair of cathode-biased EL84s. It seems pretty clear what this amp is all about and since there are so few components inside, it’s easy enough to figure out the circuit. In essence, the Neutron is a stripped-down, single-channel version of an old Marshall 18-watter, but with a 5Y3 rather than an EZ81 rectifier valve. 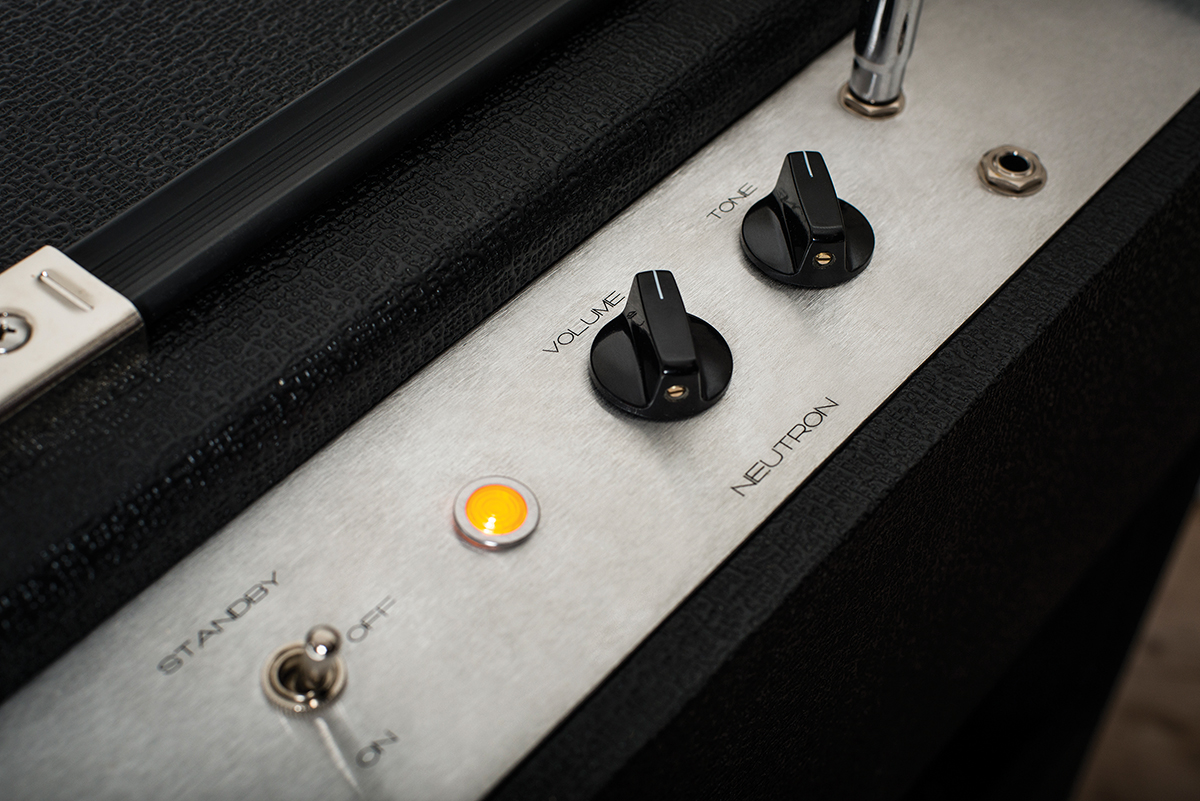 The Neutron has just two controls for you to play with – volume and tone – plus two inputs. Also top-mounted is a three-way power switch providing standby, off and on modes. The amp connects to the speaker via a jack socket mounted on the underside of the chassis. The onboard Celestion speaker is rated at eight ohms but an impedance switch also allows you to connect the Neutron to external cabinets with a four-, eight- or 16-ohm load.

The Neutron doesn’t ship with a manual and although you may feel confident about being able to figure it out after a nanosecond or so of head scratching, all is not quite as it seems. The volume and tone controls are extremely interactive because both effect gain and treble content – albeit in slightly different ways. Then there are the inputs; rather than the usual dull and lifeless sounding ‘low’ input paired with a ‘high’ input that will almost certainly be the only one you’ll ever use, the Neutron offers two genuinely viable options.

Starting with the tone control at noon and a Strat plugged into the low input, the volume knob barely completes an eighth turn before the onset of overdrive. Move the volume another eighth turn and rather than a noticeable increase in level or overdrive, you get a thickening of the midrange into a smoother Vox-like quality. This midrange push continues, along with slightly increasing overdrive, for a further half turn until the overdrive begins to increase exponentially and an upper harmonic mist drifts across the top. 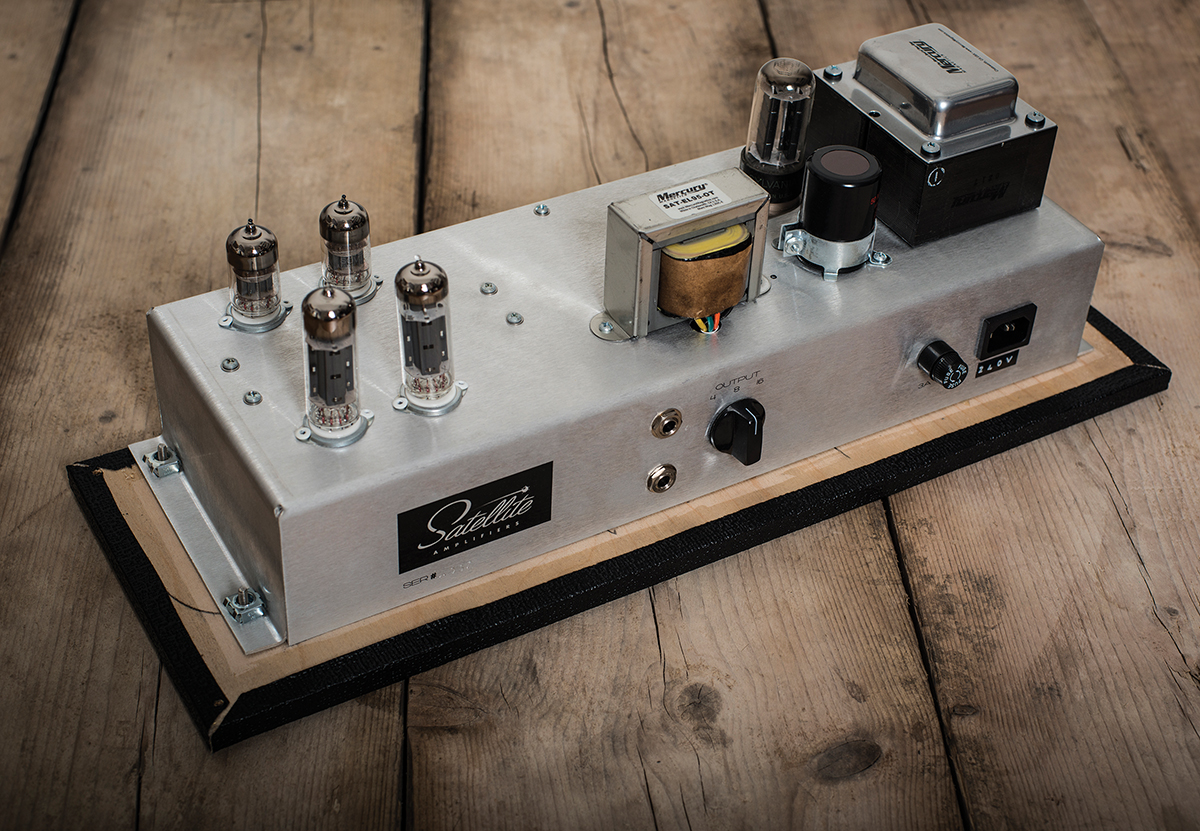 Once volume passes this take off point, the tone’s equalisation function is largely negated and instead it simply adds harmonic richness to the overdrive. The interesting stuff happens when the volume is cranked and you start turning the tone control below its halfway point because overdrive levels stay much the same, but you get a midrange scoop.

This de-emphasising of the midrange accentuates the bass and treble so, in an unexpected way, turning the tone down makes things seem brighter plus it tightens the bass. The tone control only behaves as a treble roll-off in the bottom quarter of its range.

The result of all of this is that the Neutron offers a real mixture of sounds depending upon where you set the controls. You can certainly get a ferocious vintage British crunch with massive bite and harmonic complexity. However, the Neutron has a player-friendly smoothness and touch compression that makes it somewhat less brutal than some similarly spec’d boxes. There are Plexi and tweed characteristics, although the balance is shifted towards this side of the pond.

Once you have sated your thirst for overdrive, exploring the Neutron’s subtler capabilities reveals some welcome surprises. Knock the volume back a smidgen and set the tone about a third of the way up, and the searing harmonics relax into a sweetly saturated and delicate shimmer that is reminiscent of both the best Marshalls and late 50s Fender circuits. As the compression loosens its grip, the Neutron opens up and becomes more responsive to playing dynamics and guitar control adjustments. 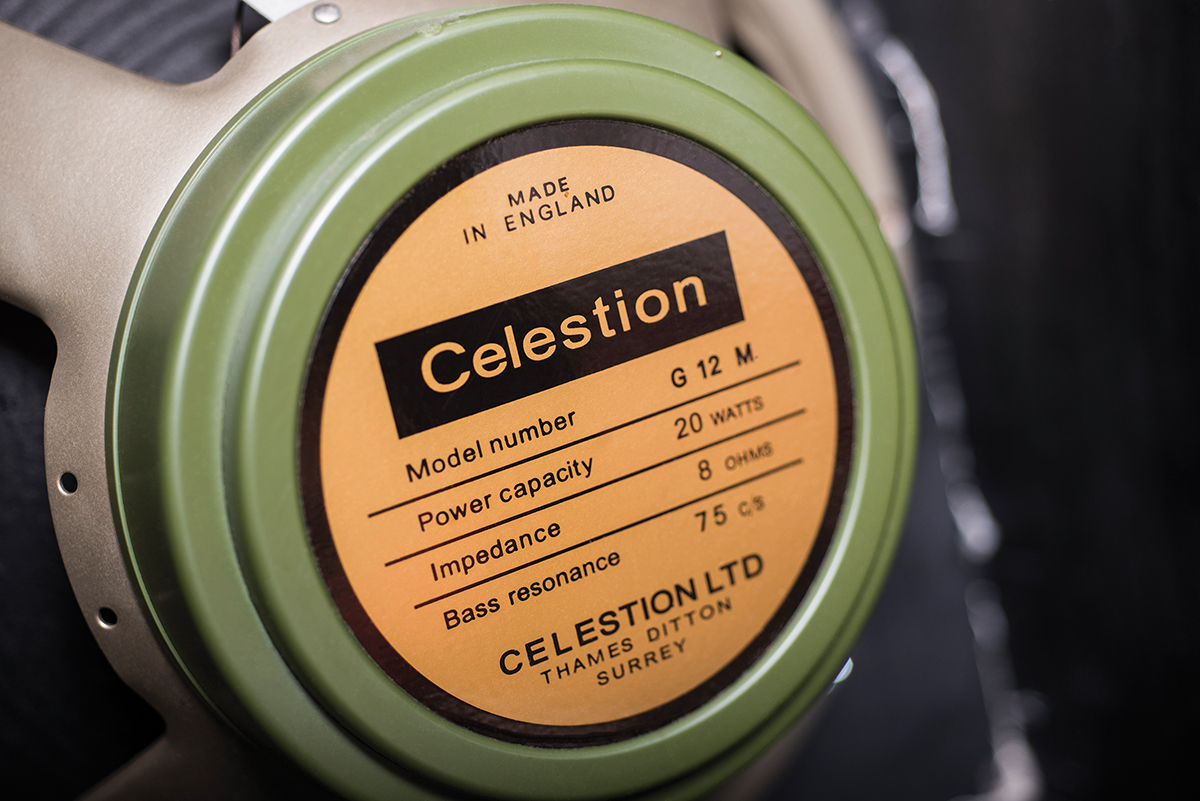 Switch to the high input and you can take things in the opposite direction. The input signal brutalises V1, leaving virtually no headroom for clean playing. By cranking up the volume and rolling the tone control all the way back, sufficient gain remains for the Neutron to muscle its way into early 50s tweed Deluxe territory with thickly saturated mids. Wind up the tone and it gradually eases towards the fuzzy, splattering distortion of a 5E3.

Once you figure out how they interact, the somewhat counter-intuitive controls are a major plus point for this amp because they provide such a wide range of tones and overdrive textures. They also behave almost exactly like the controls on the Marshall 1930 Popular combo we fixed up in the October issue.

The Neutron can certainly handle the Brit crunch thing, but it isn’t shackled to a single iconic tone. On occasion, we find ourselves craving a little more clarity and bass-end definition – especially with humbuckers – but only when using the high input and pushing the Neutron to its outer limits. Honestly, how many of us have the freedom to do that these days anyway? 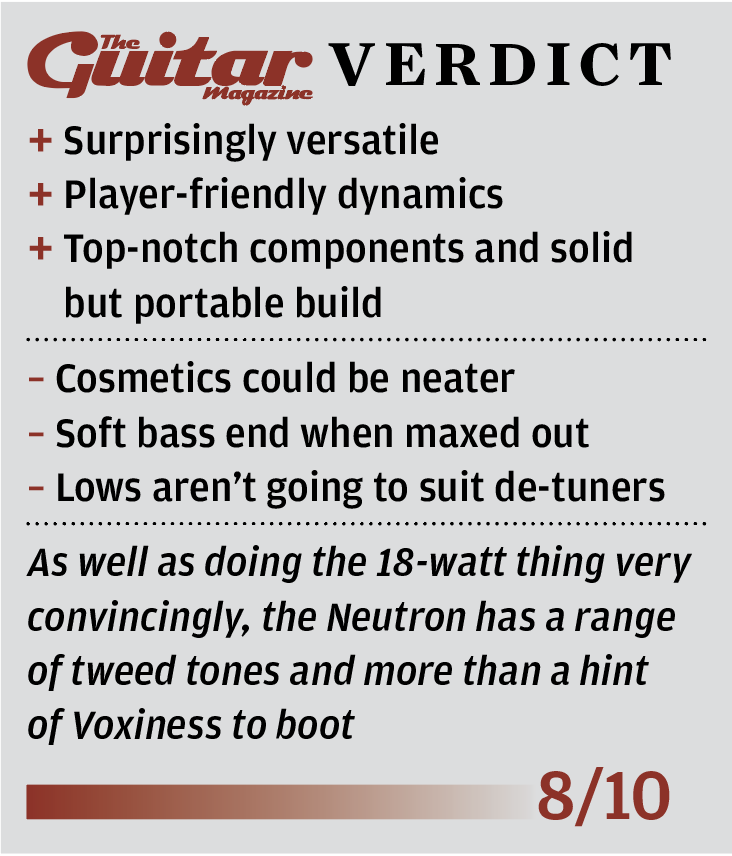