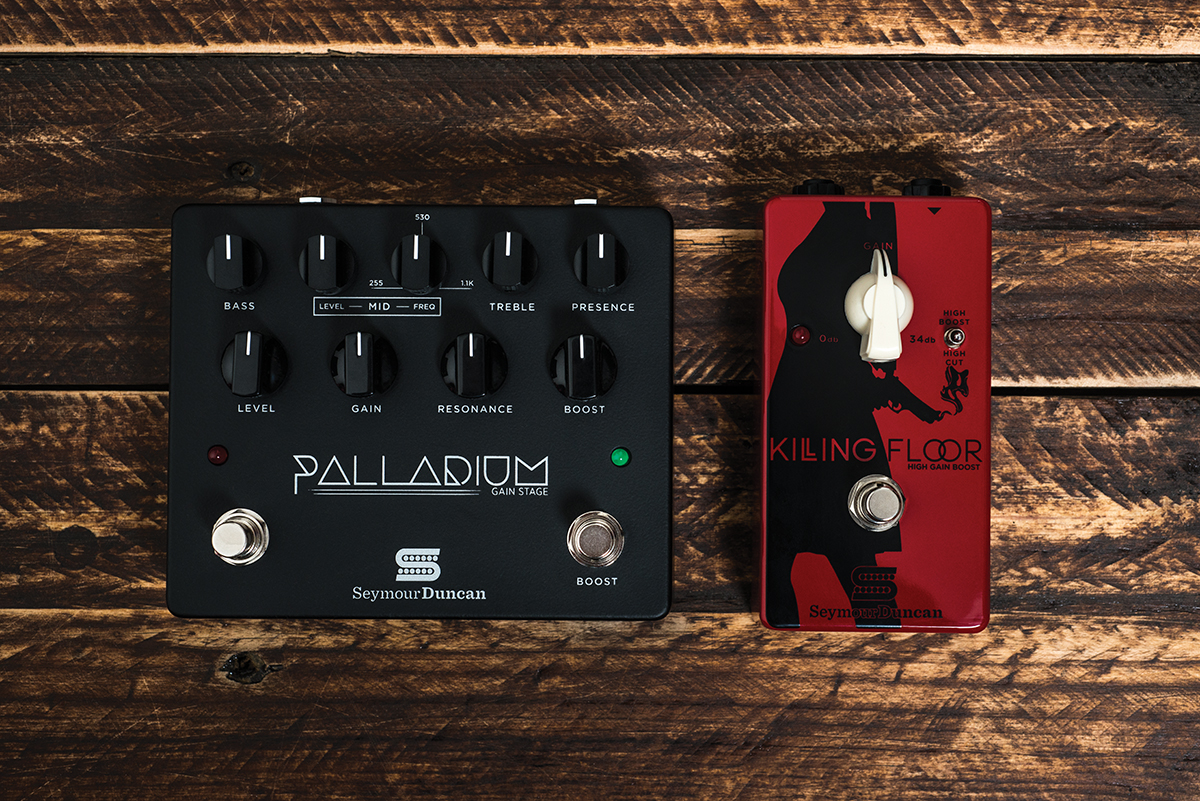 Pickup magnate Seymour W Duncan sneaked sideways into the stompbox business by releasing a pedal with the word ‘pickup’ in its name. Nobody seemedto mind, and so 14 years after the launch of the original Pickup Booster we now have 12 Duncan stompers to choose from.

Among the latest crop are these two intimidating beasts. They could hardly be more different – one has a single control knob, the other has nine – but they both have the same intention: to take your clean guitar signal and turn it into something your grandmother won’t like at all.

Palladium
Seymour Duncan doesn’t want you to think of this as a mere overdrive pedal – it’s a ‘gain stage’. The idea is to add a fully featured second channel to your amplifier (you can even use it as a preamp for a standalone power amp), complete with a switchable boost.

There’s a three-band active EQ section with sweepable mids, plus a presence control that cuts and boosts way above the treble at around 5.2kHz.

Finally, there’s a dial marked resonance for adjusting how heavily the lower frequencies are distorted. The Palladium uses a combination of low-noise op-amps and germanium clipping diodes, and does not have a battery compartment – it runs off a nine-volt power supply, which will need to be ready to pump out 180mA of current. That’s an awful lot for an analogue unit, isn’t it?

But there is an awful lot going on inside this one…

In use
Are you ready for some gentle jazz-pop stylings? You shouldn’t be – the chemical element palladium is a heavy metal, and we don’t think they chose that name by accident. Plugging it in between a Les Paul and a clean blackface amp, with the gain fully off and all other controls at noon, we discover quickly that there’s no such thing as low-gain crunch in the world of the Palladium.

It’s already rocking out, with loads of heft and sustain, and our first question is whether the gain might be stuck on maximum.

Nope, it isn’t – there’s plenty more on tap. But we ought to have a quick look at the manual before we dive any deeper into this festival of filth. The controls are clear enough, but there are just so many of them, and the effects of changing the EQ in particular are so dramatic that the six sample settings provide some welcome navigation.

They can be broken down very roughly into two from the 80s, two from the 90s and two from the modern era. All share one common feature – lots of big, smooth, furry distortion – but the range of tones they cover is impressive, from grinding alt-rock to pure hair metal. It’s just a shame this is a one-channel device, so you can’t switch from one to another.

You could argue that the most fundamental factor in defining the character of a rock-guitar voice is the midrange, and that’s where being able to cut or boost 12dB at any frequency you like comes in extra handy.

The Palladium will scoop with the best of them. The resonance control has an interesting part to play here, too – turned to the left it seems to squish out the lower mids for a different kind of scooping, while to the right it lets through more natural ‘clonk’.

The boost comes at the front end of the circuit, so a lot of its decibel-lifting impact is compressed out by the overdrive, but the extra gain it throws into the pot is a real bonus – and it’s been voiced with an added dollop of upper mids, Tube Screamer-style, making it ideal for helping solos cut through.

Killing Floor
No need for a chemistry degree to decode the name of this one: it’s called the Killing Floor and it’s got a picture of someone holding a freshly fired gun on the enclosure. Should be pretty ferocious, then.

Well, it’s a high-gain boost, and in fact there’s another clue by the top end of the dial: 34dB, which is rather a lot. We can’t think of many clean boost pedals that pack this much power, although the Keeley Katana pips it by a single decibel.

Seymour Duncan’s own Pickup Booster goes up ‘only’ to 25dB, but this is not just a louder version of that: where the PB’s three-way switch offers two levels of mids-fattening for single coils, this one lets you either boost the treble at 10kHz or cut it at 4.8kHz.

It uses a hybrid JFET/op-amp circuit ‘optimised for low-order harmonics’ – which should mean it stays pure and fizz-free – but we are warned to expect some overdrive from within the pedal, not just from the front end of the amp it’s pushing.

Build-wise, it’s a fairly standard compact stomper, with true bypass and a battery compartment whose plastic cover is easy to open. One PP3 should last you a good few gigs, as the Killing Floor’s simple circuit draws only 3.7mA of current.

In use
With the gain at zero and the toggle switch centred, you can tap this thing on and off like a hyperactive child playing Hungry Hippos and barely notice any difference in what comes out of the amp – a good starting point.

When we do wind up the boost, it comes without any obvious colouration except for a subtle pepping up of the top end. With single coils at least, flicking to high cut actually brings something closer to a neutral boost – and even chubby humbuckers come through without any unwanted muffling.

The high boost setting is more obviously treated, and it’s extremely nice, adding sweet chime without harshness in a way that inevitably calls to mind a Vox Top Boost circuit.
We wouldn’t be afraid to use this with fairly bright single coils. So where does the clean boost start getting dirty? It’s hard to tell for sure, but by 11 o’clock on the gain control there seems to be some grit creeping in no matter how low the amplifier’s preamp is set.

At the full 34dB, it’s properly roaring, but this is tight, balanced, natural overdrive – let it feed into a preamp that’s already close to the edge and… well, maybe this thing isn’t so different from the Palladium after all. 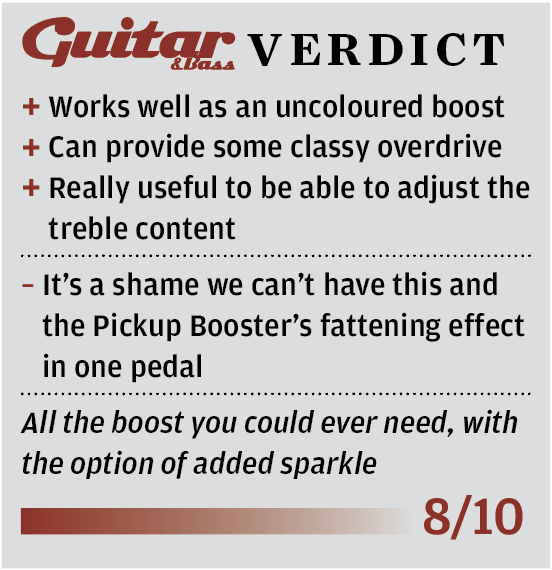