UK company Snap Dragon claims to have created a “no-compromise travel guitar” – we find out if it should be in your carry-on this summer. 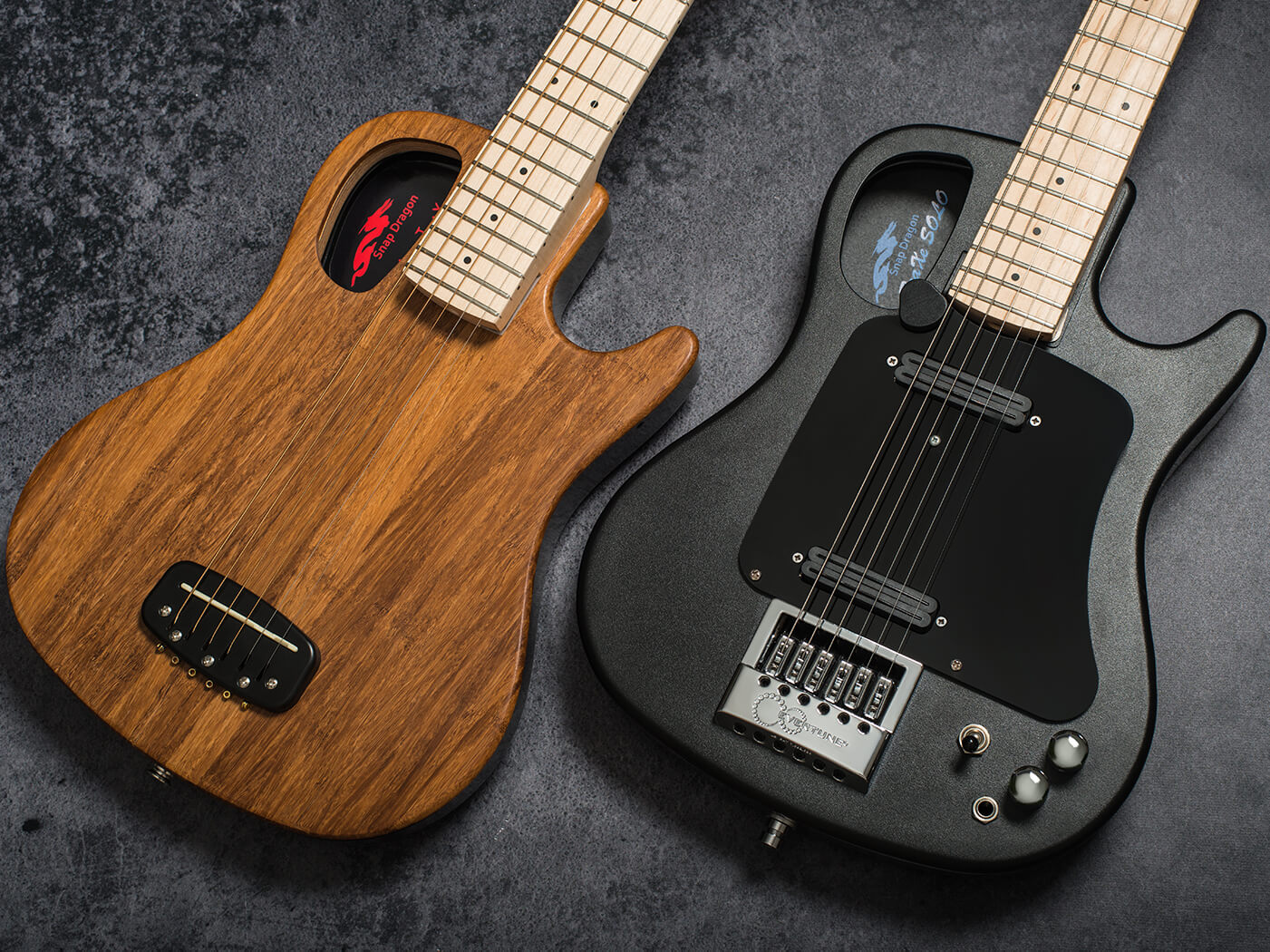 Going on holiday might be a chance for us to get away from it all, but plenty of guitar players don’t want to get away from their guitars when they’re enjoying a well-earned break, as the continuing popularity of travel guitars in all shapes and sizes attests.

Travel guitars are of course, designed to be compact and that often leads to the creation of instruments that look a bit strange, or have inherent limitations. However, Essex firm Snap Dragon Guitars claims to offer a “no compromise” approach to travel guitars and to put that to the test, we’ll be checking out the company’s most popular model, the Mini Traxe, and its flagship, the Traxe Solo. 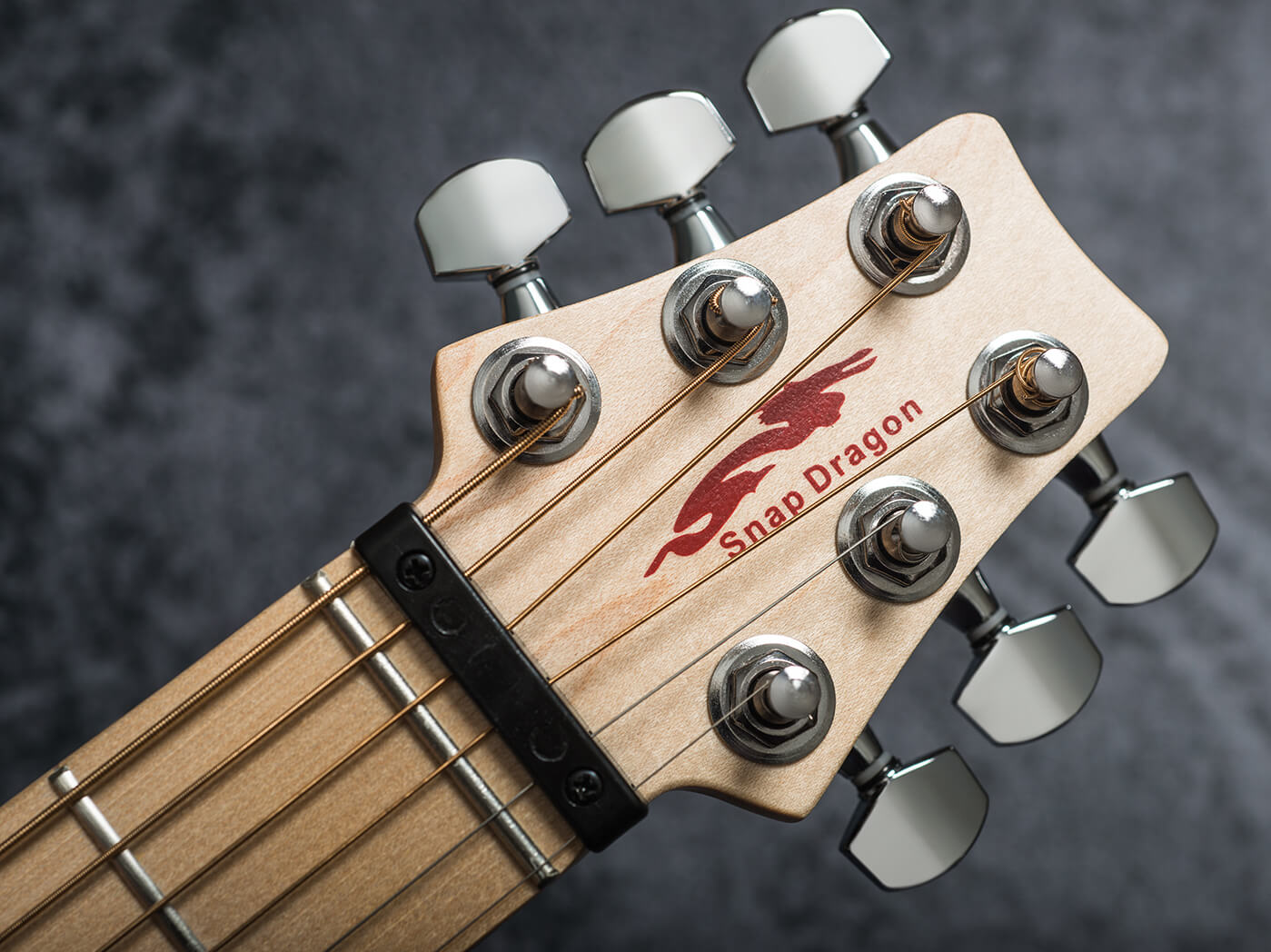 Certainly, the initial impressions are favourable – both instruments look effectively like a scaled-down conventional guitar, complete with teeny three-a-side headstocks, full-size necks and single-cut bodies. They’re not exactly compact in this configuration, but thanks to a pivoting neck system, both guitars fold up and fit comfortably inside their small carry cases, which Snap Dragon confirms will pass muster as hand luggage with budget airlines.

Both instruments have certain features in common. The maple necks are 24-inch scale, 20-fret jobs with a very modern 12-inch radius. The frets themselves are nickel-silver, while a zero fret is there to help with intonation and six 18:1 locking machine heads are designed to keep things stable.

They each sport the same single-cut semi-hollow design with a large soundhole on the bass side, and they share a bowl-style polycarbonate back and aluminium centre-block. Where they differ most strikingly is on top. The more electric-style Solo has a polycarbonate top, while the Mini has a wood top made of ‘timboo’ – a sustainable timber alternative made of compressed bamboo fibres.

The Mini has a polymer top-loading bridge with a plastic compensated saddle. The only electronics are a passive undersaddle piezo that feeds out of an endpin jack socket, but the Solo has a lot more going on. 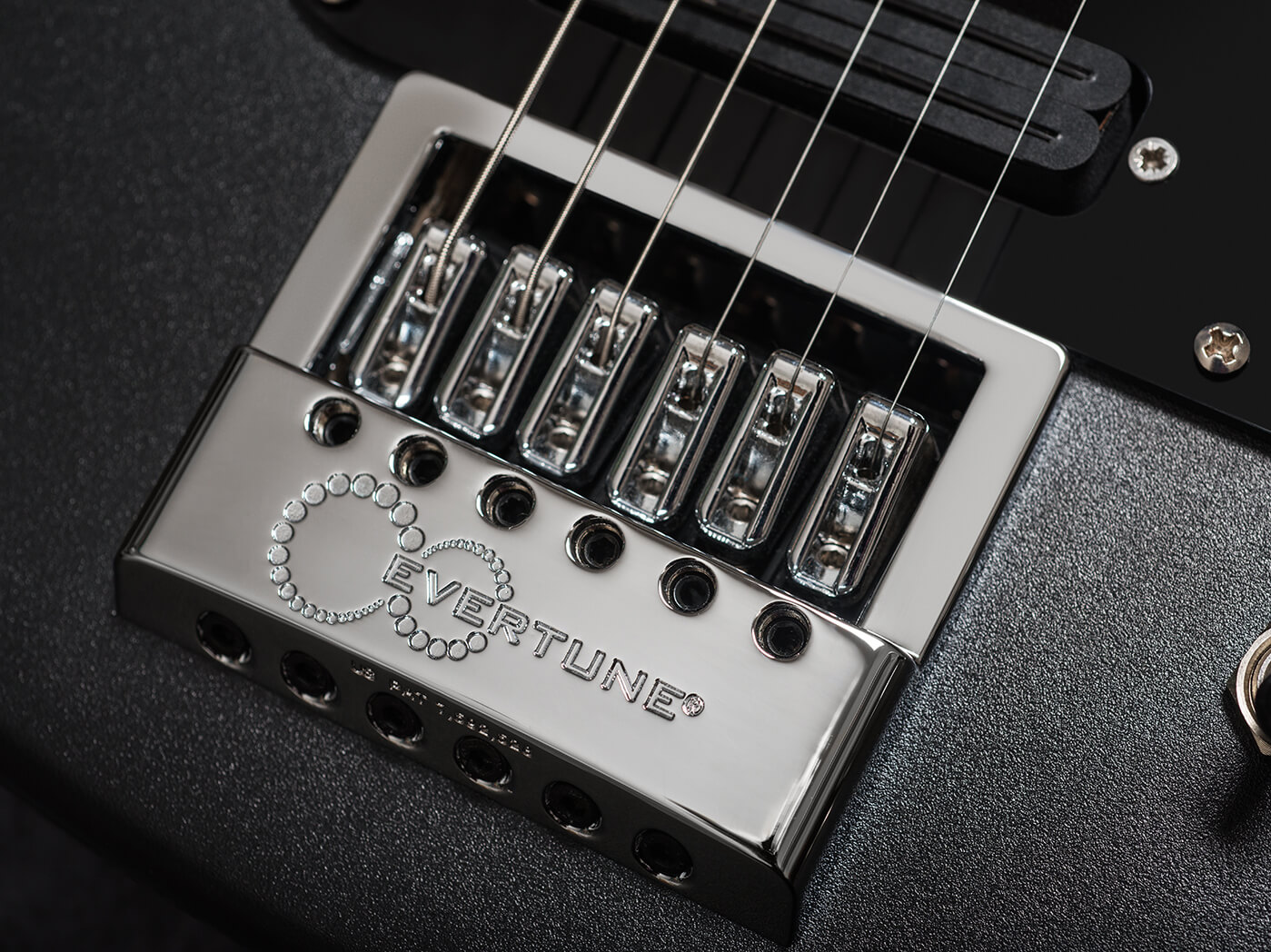 Definitely more of an ‘electric’ instrument, the Solo’s two coil-splittable twin-rail humbuckers are paired with a three-way toggle and common volume and tone controls to offer a wide array of electric sounds, while at the bridge end we get the reassuring bulk of an EverTune bridge.

A feature on a range instruments from ESP and other rock-focused makers, the EverTune is a mechanical system designed to maintain string tension regardless of the pressure exerted on the string – in theory, this should mean that the Solo should be perfectly in tune when it’s unfolded.

The same can’t be said of the Mini Traxe – upon removing it from its gigbag and snapping the neck into place, it’s clear that you’ll want to take a tuner with you on holiday – though make sure it’s an app or a stompbox, as that bijou headstock has no room for a clip-on unit. Once that’s done and dusted we can get around to playing – and while this guitar definitely wants to be an ‘acoustic’ with its phosphor-bronze strings, the neck certainly doesn’t feel like an old flat-top.

With its 12-inch radius and flat U-shaped profile, this has more in common with a JEM than a D-18 in terms of playability, which certainly lends an interesting crossover vibe to proceedings.

As you’d expect for a bowl-backed guitar with a three-inch body depth and an aluminum centre-block, it doesn’t exactly blow you away acoustically, but the wood top certainly helps alleviate some synthetic characteristics. 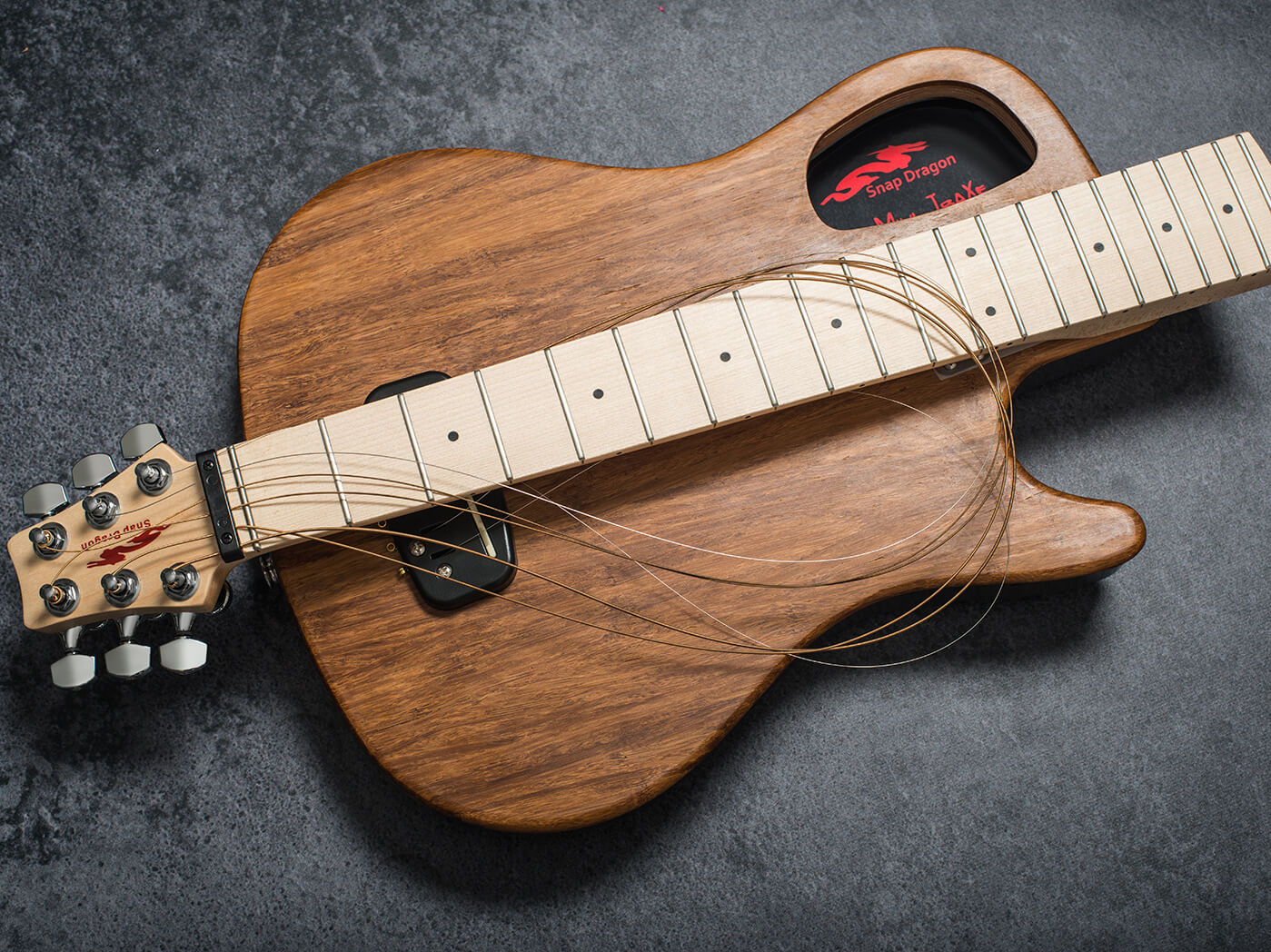 Perhaps it’s counterintuitive, but plugging in gives you more of a feel that you’re playing an acoustic instrument – there’s plenty of piezo quack, that’s for sure, but it’s definitely warmer, with more bass response than the unplugged tone.

The EverTune bridge has demonstrated its ability to maintain tuning under various extreme conditions, but doing so on a neck that’s been flipped 360 degrees with the strings not under tension seems a tall order. And yet when we snap the Solo’s neck into place it takes a second or two for the internal gubbins to do their thing but lo and behold, we have a guitar that’s rock solidly in tune.

Strung with electric strings, the Solo’s neck, near-identical to the Mini’s, is a much less confusing proposition in this context – though fans of fat vintage neck profiles and rounded radii won’t be in love, it’s a very playable and smooth plank.

That said, you won’t get much love beyond the 12th fret, even with the generous cutaway. The pivoting neck construction means that the neck is effectively sat fully on top of the body at the join, so unless you’ve got fingers like ET, stretching your hand around while keeping your thumb on the back is nearly impossible at the dusty end. Or maybe that’ll be the sandy end if you’re playing on the beach.

With plastic and aluminium construction, the less said about the Solo’s unplugged tone the better, but it’s meant to be plugged in – and that’s when it comes alive. Running into our test Fender and Marshall amps, the twin-rail humbuckers pair well with the lively resonance of the body to offer a tone that’s very usable, especially with lashings of Tube Screamer and amp overdrive in play. The sustain isn’t bad either. 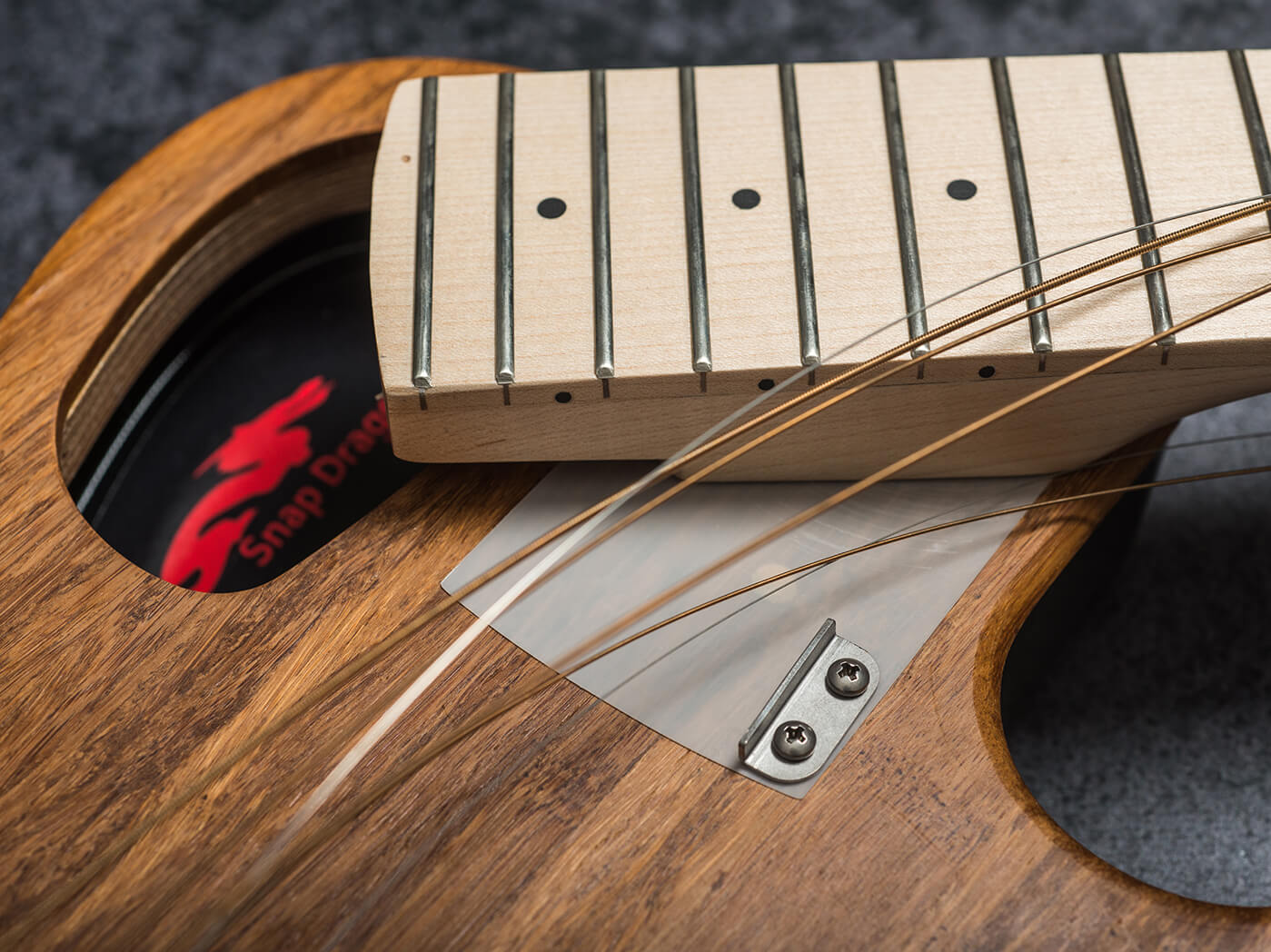 Pulling up the volume control to engage the coil-split offers convincingly twang-y single-coil tones, and with a nice taper on the pot itself, there’s real sonic versatility here.

Okay, this isn’t going to replace your favourite full-fat Les Paul or Strat any time soon, and the downside of the EverTune bridge is that any kind of altered tuning is going to require an Allen key and the instruction manual… but it’s worth remembering what these guitars are for.

These are two interesting instruments. The Mini is a fun and affordable take on the travel guitar, but it lacks the feel and tone of the similarly priced Martin Backpacker.

The Solo, on the other hand, does everything that you’d want: it feels and plays like a proper electric guitar, yet could be used as hand luggage. Our issue is with the price – at £549 it looks expensive compared to some of its ‘proper’ travel guitar rivals, and is a big investment for an instrument you’ll presumably only use a couple of times a year.

What both these guitars do have over their rivals is portability – with the pivoting neck, they’re substantially less unwieldy than their peers and are much more overhead-locker friendly. In an era where every bit of extra space and luggage on a plane is likely to cost you, that’s not to be sniffed at.