A surf classic rebooted via a near-vintage replica and a long-necked behemoth with an identity crisis… Ed Mitchell investigates. 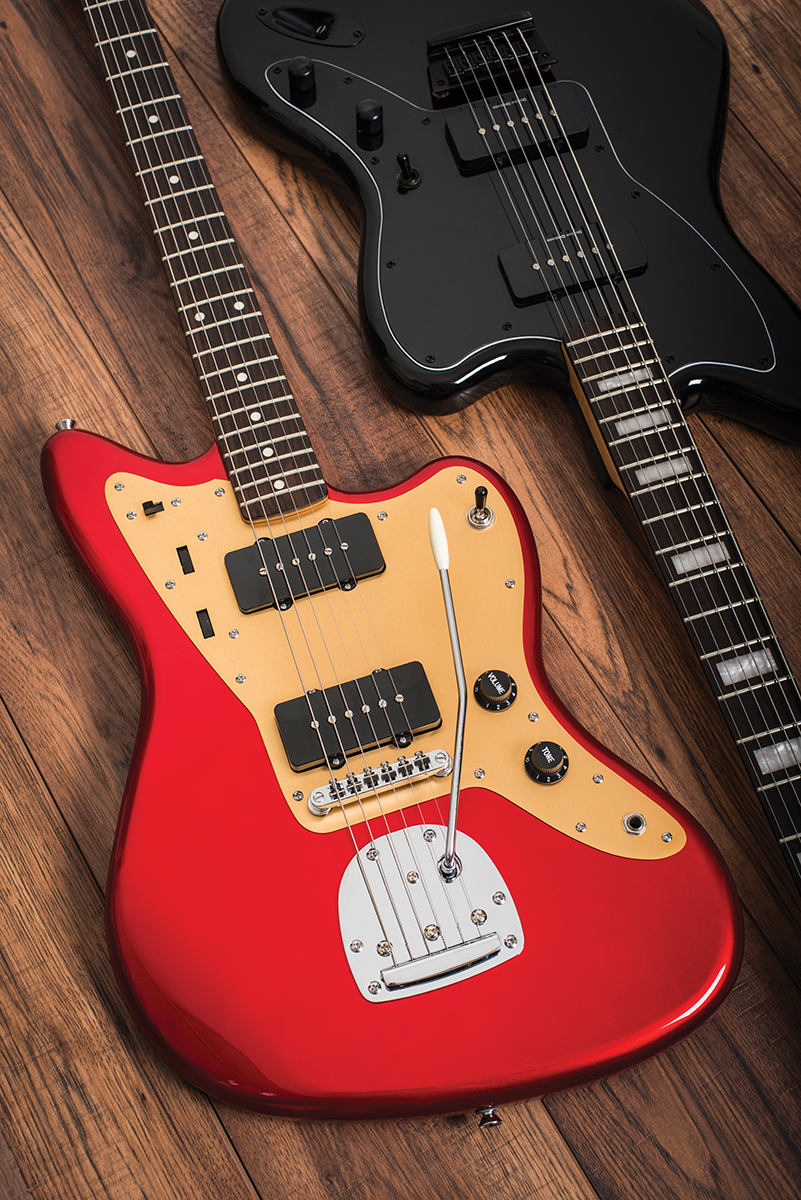 Most of us could write a PhD on the Fender Stratocaster and Telecaster by now without breaking a sweat. Leo Fender’s world-changing bursts of inspiration have been documented, discussed and debated in exhaustive detail. Of course, as annoying 1980s comedian Jimmy Cricket was fond of saying… “there’s more”.

Launched in 1958, the Fender Jazzmaster was another Leo triumph, a slightly over-engineered beast with a complex wiring loom and vibrato unit that became tonal meth to countless surf guitarists, not to mention Elvis Costello, J Mascis of Dinosaur Jr (with his signature Squier Jazzmaster) and Johnny Cash sideman Luther Perkins. 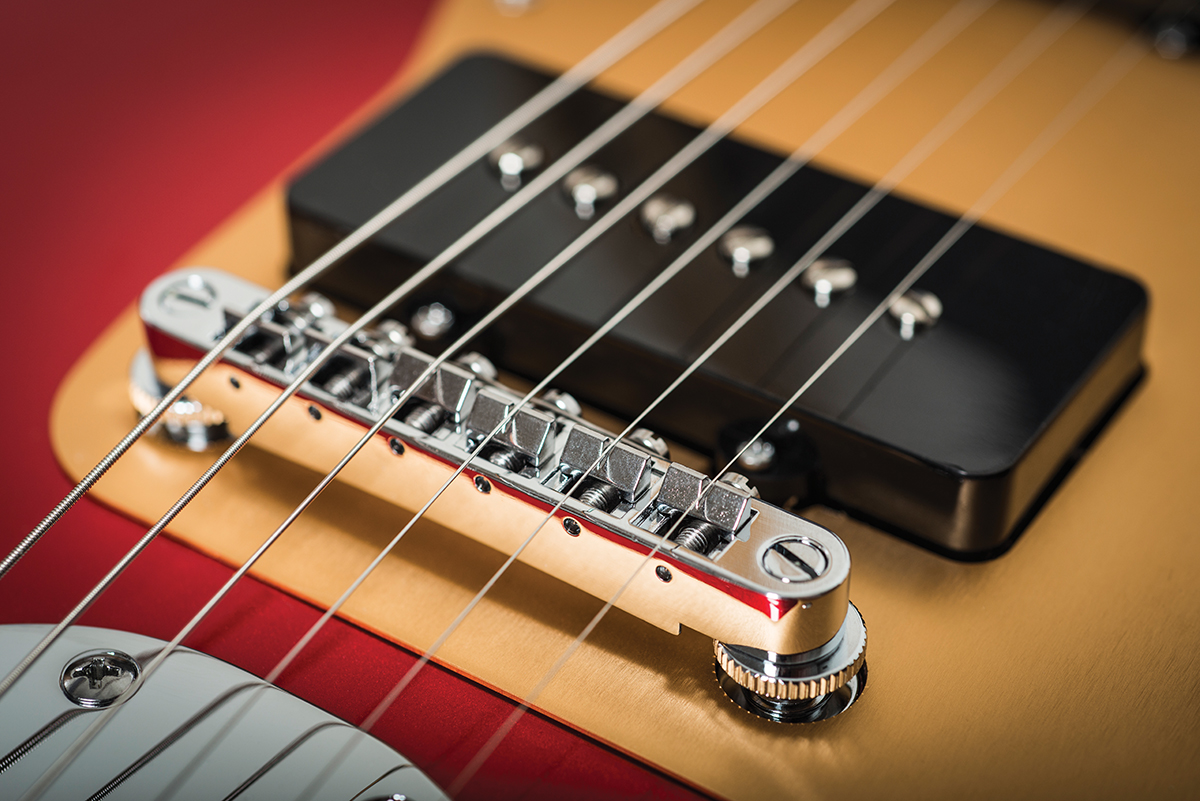 If the comibation of whammy and Adjusto-matic isn’t your thing, a hardtail ST alternative is available

The freshly-hatched Squier Deluxe Jazzmaster and Vintage Modified Baritone Jazzmaster we have here capitalise on their ancestor’s popularity, with the same offset chassis, albeit chiselled from basswood. Jazzmaster DNA is also splashed all over the bolt-on C-profile maple necks and 9.5-inch rosewood fingerboards – and those big single-coil pickups.

The Deluxe Jazzmaster concept couldn’t be simpler. Take a timeless classic, one that usually strips your savings account like some ne’er do well cyber scammer, and scale down the production costs without compromising on the eye candy. On that front, the Jazzmaster scores big with the glint of its one-ply gold anodised aluminium scratchplate and a big headstock that plays host to a set of old-school Kluson-style tuners. 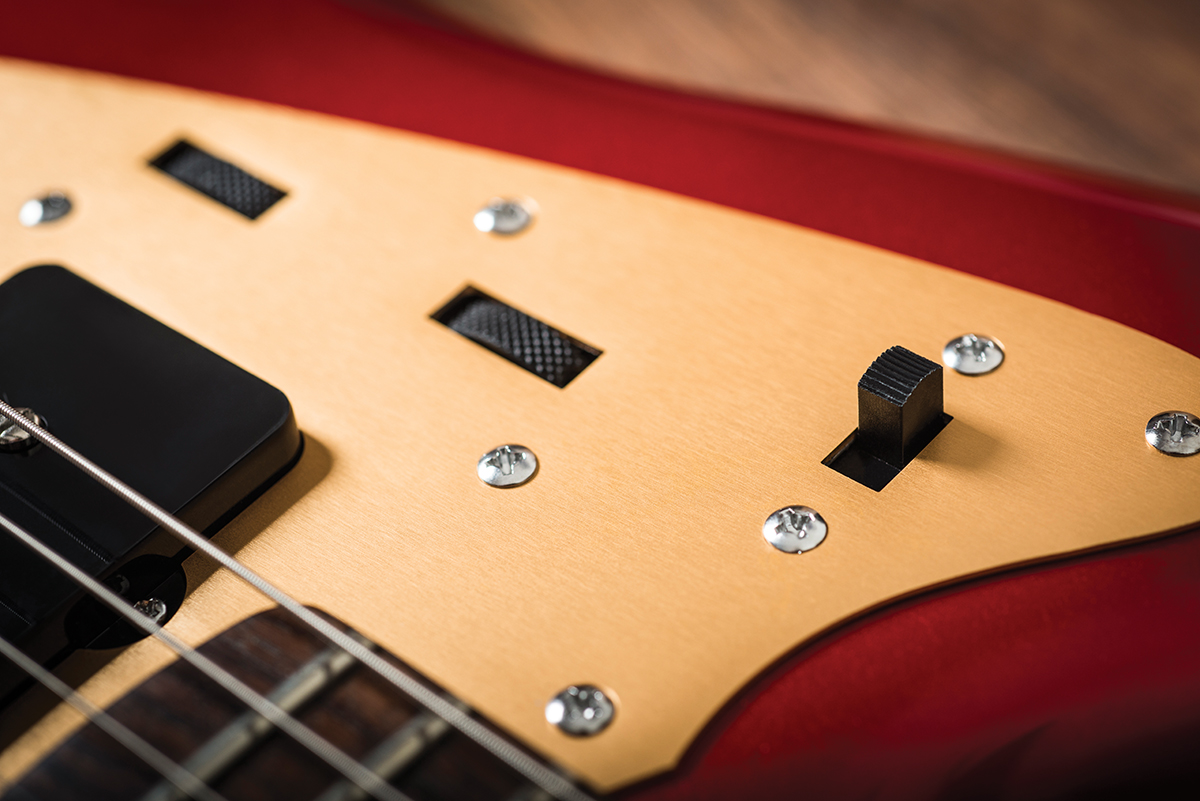 You also get that overly complex but undeniably cool-looking vibrato (no, not ‘tremolo’, Mr Fender) with the long arm and an adjustment screw for tension. We’re not blown away by the Adjusto-matic bridge here – it doesn’t quite follow the radius of the fingerboard and doesn’t look as vintage-correct as the original Jazzmaster bridge. A hardtail version, the ST, is available at the same price.

The Deluxe’s vintage credentials have been further usurped, with 21 medium jumbo frets and that 9.5-inch radius board for easier bends above the 12th fret. The back of the neck has a slick satin finish to help you move around when your palm gets a bit sticky.

While it shares the 9.5-inch radius of the Deluxe model, the Vintage Modified Baritone Jazzmaster has a longer 30-inch scale length, just like the Fender Bass VI – used by The Beatles, Cream’s Jack Bruce and others – and the shortscale Mustang Bass. 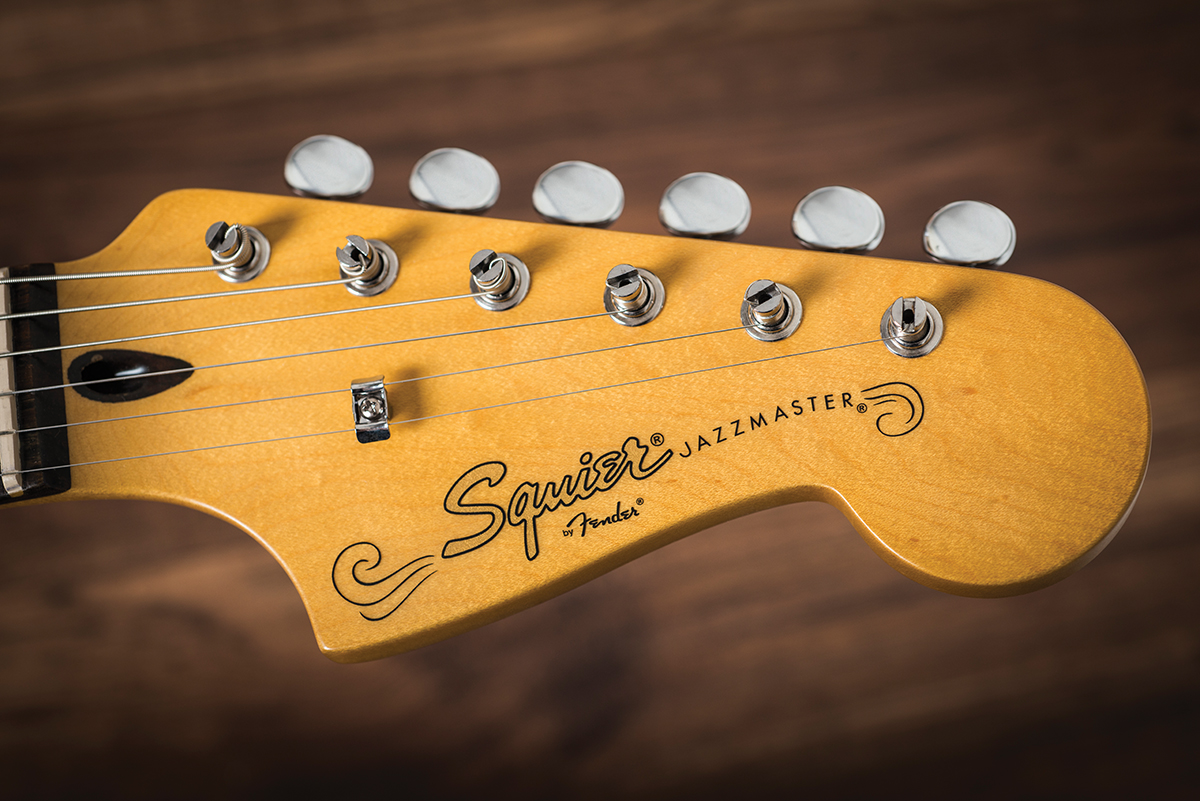 This thing is like the current Ford Mustang muscle car. The modern paint job and black hardware barely disguise this beast’s vintage roots. It’s undeniably cool, but we can’t help wondering why Fender has gone to all the trouble of building a baritone with modern metal looks then slapped in a pair of single-coil pickups.

Fender has ceased production of the rather ‘Marmite’ 70s Antigua finish option, which at least offered more of a vintage vibe, but then there’s also a Vintage Modified Bass VI available at £425.

Other Baritone Jazzmaster selling points include a rosewood fingerboard with 21 medium jumbo frets and rolled edges, a simple control layout (master volume, master tone, three-way pickup switch) and what looks uncannily like a Danelectro bridge. Before we plug in, both guitars play great with a comfortable action and no choking or buzzing. 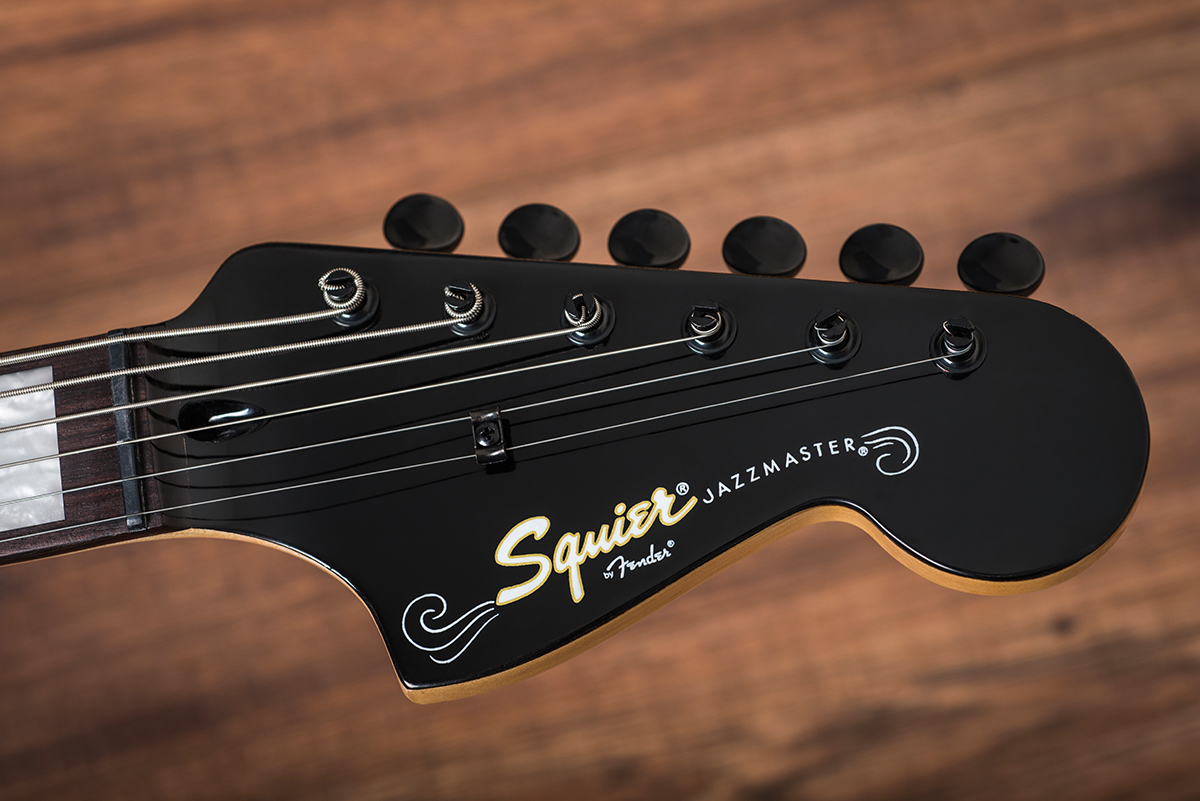 Tonally, the Deluxe is everything we expected, although the wiring loom can be confusing. You get a conventional volume and tone control for the lead (bridge) pickup, and a roller volume and tone for the rhythm circuit on the guitar’s upper bout.

There’s also a three-way pickup selector toggle and a two-way lead/rhythm slider switch. We don’t have the space here to go chapter and verse on this, but it’s worth noting that the rhythm circuit is noticeably darker – presumably aimed at the jazz players who never gave the guitar the time of day in the end.

Moving on, the bridge pickup is bright and twangy and laps up springy reverb like a good ’un. If you’re thinking of dipping your toe into surf guitar, this is a great place to start.

Introducing the neck pickup into the mix adds some depth to the tone, which works well for rockabilly and rhythm work. As you’d expect, the neck pickup solo is the warmest spot on the guitar. It offers a booming twang that partners well with vibrato arm dips, yet engage the rhythm mode and you get a much deeper tone. 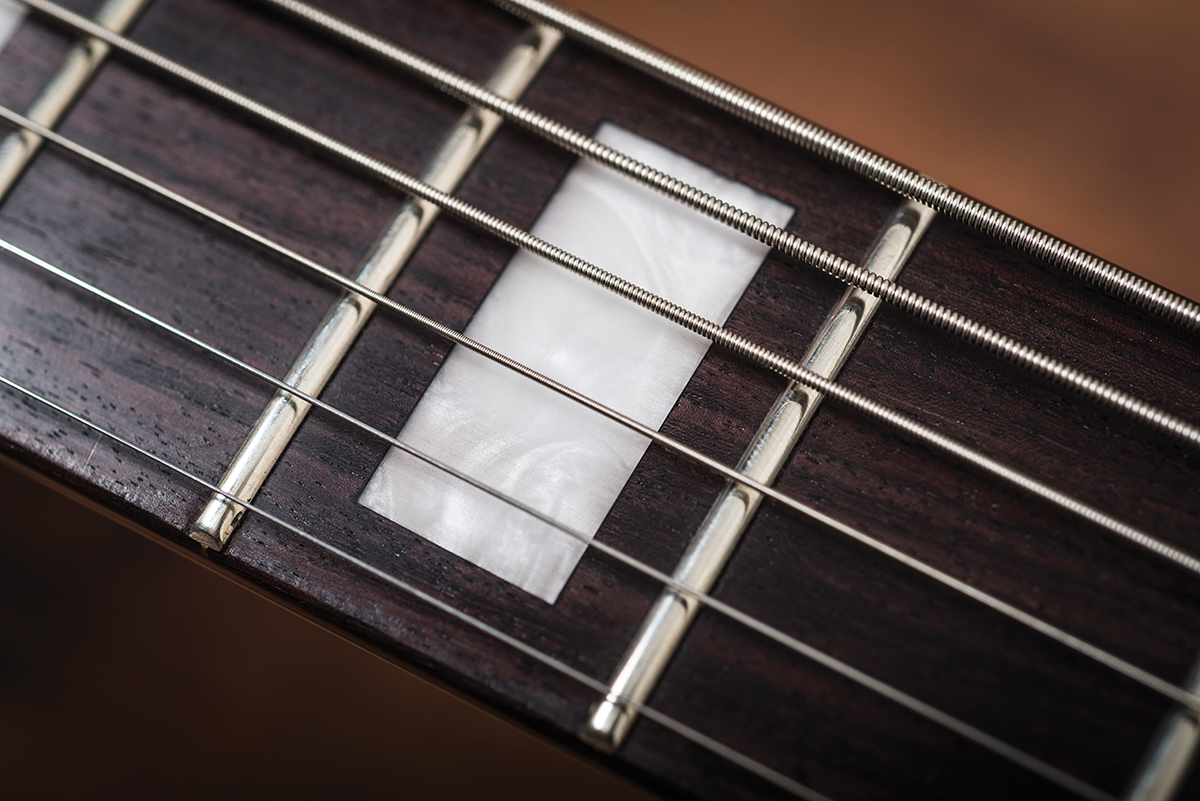 Adding some 60s-style fuzz or more refined valve-like overdrive reveals another Jazzmaster trait; few guitars cut through a mix like an angry Jazz, and string separation is also impressive. It’s a more tightly defined tonal response than the shorter-scale Jaguar, and the pickups provide way more beef than its short-arse cousin.

The Baritone is in A to A tuning (low to high: A, D, G, C, E, A). Yes, it does a decent job of thumping out heavily distorted bottom-string riffs, not unlike a fuzzed-up bass in fact, but it’s at its happiest on a clean setting – especially when partnered with old-school effects such as reverb and tremolo.

Running through the pickup switch reveals increasing levels of depth and darkness, but we love the throaty twang of the bridge unit. It’s here that you’ll bag a fistful of that Ennio Morricone soundtrack vibe, cheesy old spy movie stuff and that deep resonant sound on Glen Campbell’s Wichita Lineman and Galveston. 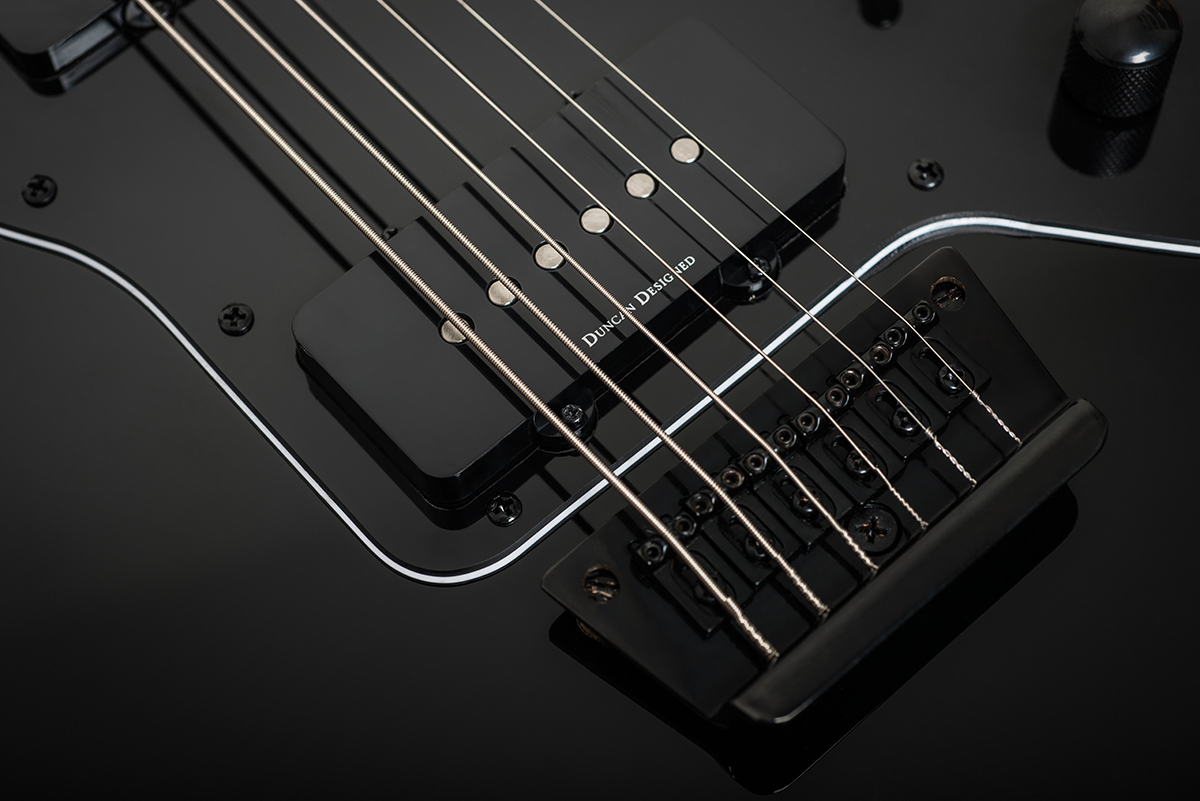 The Deluxe Jazzmaster ‘With Tremolo’ knows exactly why it’s here. You get all the cool bits of owning a classic Jazzmaster without the big price tag. Build quality is the business and the thing just looks and plays great, holds its tuning and pumps out a wealth of very acceptable tones.

The Baritone Jazzmaster feels a bit less sure of itself. In its ‘none more black’ guise at least, the look may be too intimidating for the Americana and country crowd, yet its tonal palette will be too polite for metalhead.

While the Deluxe Jazzmaster is proof of just how good Squier guitars are these days, the Baritone is an example of a company that isn’t afraid to take chances, even with its more affordable guitars. At £350, you can afford to take a chance too… 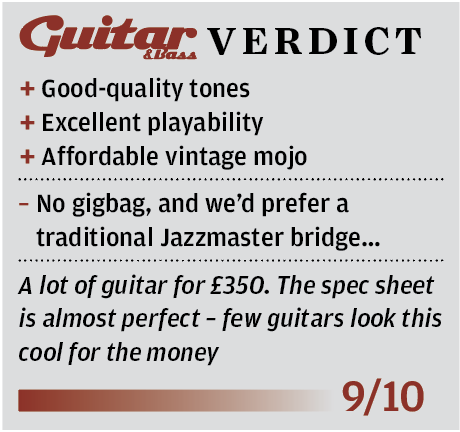 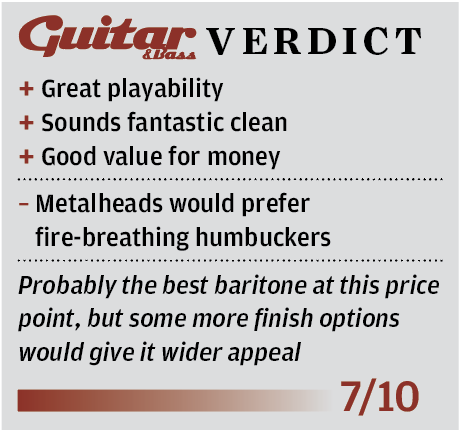