Strymon’s latest luxury stomper aims to emulate the quirky delays of the past… but not the analogue ones. 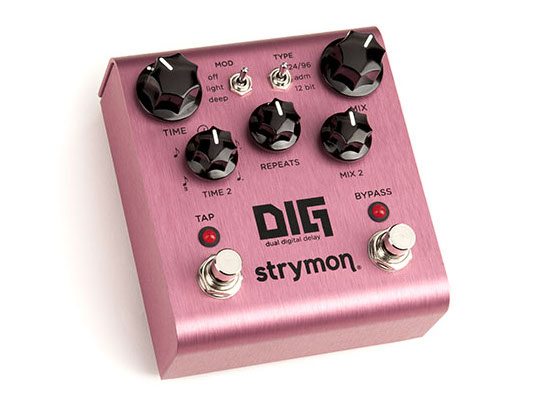 We all know the accepted story: analogue delay is warm, wobbly and unpredictable; while digital delay is clear, crisp and just too perfect for rock ’n’ roll. This is why some digital delay pedals are strangely coy about their own workings, and why many others make a great show of their analogue emulation tricks – using their modern processors to mimic the signal degradation caused by those flaky old bucket-brigade circuits.

So what is going on here? The Strymon DIG is a digital delay that emulates… other digital delay units. The dry signal path is pure analogue, but everything else that comes out of this little pink box is 100 per cent digital and, for once, proud to wear its 24-bit heart on its sleeve. That might sound strange for a retro modelling unit, but there is some serious thinking involved: it’s more than 30 years now since the dawn of digital delay, and those early rackmount devices were pretty primitive by today’s standards – primitive enough, Strymon reckons, to merit a revival.

There are three delay types on offer, accessible by a mini toggle switch at the top of the unit: 24/96 promises the purity of modern 24-bit/96kHz processing, ADM copies the percussive adaptive delta modulation of the early 80s and 12-bit goes for the slightly darker-toned delays of the mid-80s. The other mini switch allows you to add light or deep modulation to the repeats – this is the kind of atmospheric chorus effect made part of the delay landscape by the Electro-Harmonix Deluxe Memory Man.

Now then, as you may have spotted, there are no less than five other controls to twiddle here – the ‘Dual’ in the name means you can have two different repeat times running at once, just like a tape delay with multiple heads, and this is an important part of the DIG’s sound. The two can be set for completely independent control, but the default mode has the second delay running at one of five subdivisions of the first one. Four of these are standard divisions, allowing for rhythmic layering effects, while the fifth is a ‘golden ratio’ that will, in theory, never land on the same beat as its parent; this setting is represented by a fractal-style squiggle, which is cute, though hardcore maths fans would surely have preferred a phi symbol. Each delay has its own mix control, and the repeats knob in the middle takes you from a single echo to infinite feedback.

Add the tap tempo footswitch and, controls-wise, that might seem to be about it… but no. The pedal says DIG, and that’s what we need to do – deeper. There are some nifty secondary functions available, and they’re accessed by tweaking the controls while holding down both footswitches. You’ll probably nod off or go back to your knitting if we list them all here, but two of them really need highlighting. The first is switchable true/buffered bypass – an especially useful trick for a delay, as some players insist on pure input-to-output bypass, but the buffered option allows delay trails to fade away naturally after the effect is switched off – and the second is a two-way tone filter hidden inside the first mix control. Turned to the right, this engages a bass cut for lighter, more airy textures; to the left, it starts shaving off the top end for progressively darker repeats. Add the modulation and this could get very interesting – even, dare we say it, analogue-sounding? 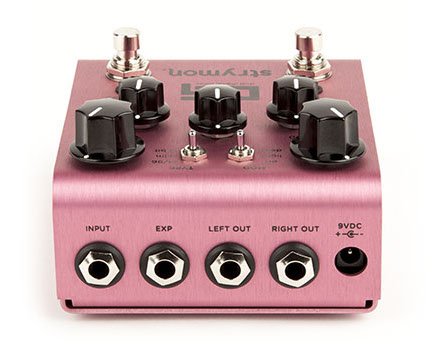 It’s hard to know where to start with such a feature-packed unit, but we’d best kick off with just the one delay and add the second later. The time can be set anywhere from 20 milliseconds to 1.6 seconds, which should be a wide enough range for anyone, and leaves the most commonly used times somewhere around the middle of the dial. In pure 24/96 mode, with no modulation and no filtering, it sounds exactly as you’d expect: the repeats are clear and hi-fi, with very little background hiss. They can be short and slappy or long and loop-like; the basics of modern digital delay, in other words, are well covered. So, let’s start messing things up…

All five subdivisions offer useful additions to the texture of the primary delay, with some interestingly jerky rhythms coming from the two dotted settings, but it’s the golden ratio that stands out for its creative potential. Set the repeats to go on long enough and it doesn’t sound like a simple multi-tap delay – it sounds like any number of delays and reverbs twirling around each other in a bewitching cosmic dance of love. Or something. The repeats can be maxed out for self-oscillation, but Strymon seems to have used some discreet limiting to make sure this doesn’t get out of hand and destroy your amp and/or hearing. The modulation is nicely judged, with just a hint of sweet shimmer on the light setting and full-on Memory Man lushness on deep.

So let’s have a look at these retro modelling tricks. At subtle settings, it has to be said that the differences between the three delay types are barely noticeable – there’s maybe a hint of extra midrange attack in ADM mode, and a slightly softer edge in 12-bit. The distinctions do stand out more clearly once you crank the repeats knob, but this is not the real secret weapon of the DIG.

What is? The EQ filtering. Maxed out to the right, this scoops more and more body out of the repeats until you’re left with something strangely brittle and otherworldly; a few degrees left of centre brings convincing analogue-style muffling, while the deep, deep textures available right at the bottom of this dial are quite something. You can keep playing clear, unfiltered guitar parts over the top and listen as they dissolve gradually into the rolling wash. Planning to create some ambient electronica to soundtrack a documentary about the beautiful and mysterious world of the jellyfish? You might not need to buy a synth after all. 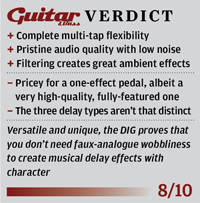