Although Supro amps may be more evocative for our American cousins, we can all appreciate retro chic. 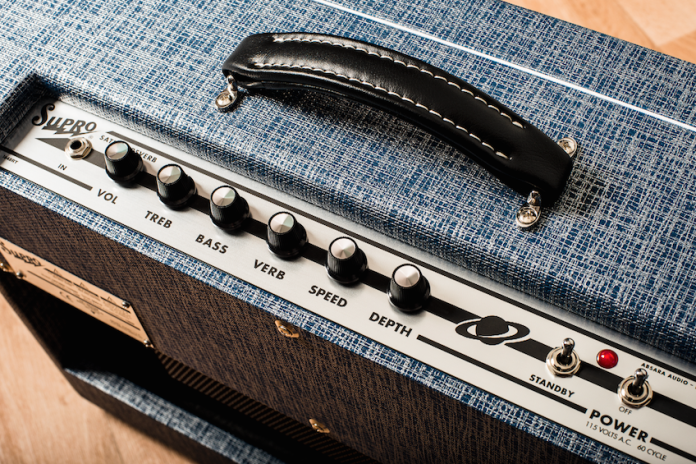 Every amp company from back in the day seems to have some sort of claim to fame. Supro’s is hard to beat, because Jimmy Page used one as his studio amp of choice for many years. Other than that, Supros are mostly the fondly remembered first amps for countless American guitarists of a certain vintage. Now Supro is back in business with a long list of ‘name’ player endorsees.

The chaps at Pigtronix are also behind the Supro brand, along with well-respected amplifier designer Bruce Zinky. Having designed the Prosonic for Fender, these days he’s the boffin responsible for the new Supros.

Supro’s latest amps look fantastic. Alarmingly, the distinctive tolex is described as “Rhino hide”, but unless rhinos are electric blue (and silver) we can be confident that no endangered species were harmed during production. Kudos is also deserved for selecting cool-looking reflective control knobs rather than ‘chickening out’ like many of the boutique boys.

At first glance, the Saturn and Royal seem virtually identical. But despite being the same size, the Royal has more knobs, more speakers, more valves and a lot more power. It’s also much heavier. Let’s take a closer look… 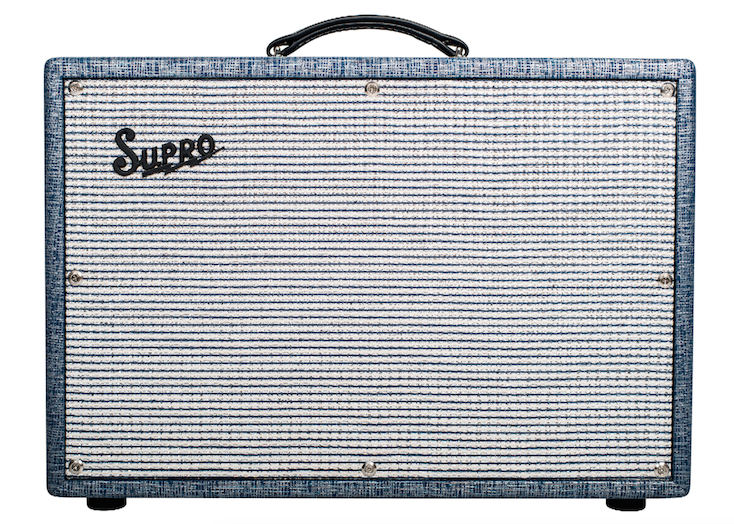 Described as a cathode biased 15-watt combo, the Saturn’s 6973 power valves are perhaps its most interesting feature. Designed by RCA during the 1950s, the 6973 was used mostly in jukeboxes, although it featured in various guitar amps – including the Supro Jimmy Page donated to the Rock And Roll Hall Of Fame.

This one-channel, open-back combo has reverb and tremolo and it’s loaded with an Eminence DT12 ceramic 12-inch speaker voiced to sound like an old Jensen, with a “nice firm bottom”. It’s valve rectified and, like all the new Supros, it’s assembled in New York.

If the Saturn Reverb were a singer, it would sound something like Tom Waits after a heavy night, because a throaty and gravelly bark lends the Saturn its distinct voicing. It manifests as a bump in the low-mids that pushes forward the A and D strings of open chords.

There’s also a slightly honking and nasal quality to the tone, that makes single coils sound a bit like humbuckers. This impression is compounded by a rolled-off treble response that falls some way short of airy openness.

It’s undisputedly retro, somewhat lo-fi in a bluesy sort of way, and there isn’t much clean headroom. You can’t dial in a wide variety of sounds or mimic other amps, and it colours every guitar you play through it. Happily, it’s a likeable colouration – and it suggests intent to retain the Supro sound rather than conceal generic circuitry inside designer cabinets. Both tone controls can be taken to their extremes and still produce some useable sounds.

For instance, diming the treble and cutting the bass reveals the Saturn at its twangiest and most cutting, but there’s still sufficient body and headroom increases. Reversing these settings can drag some unexpectedly convincing woody jazz tones out of maple-necked Fenders.

Having reverb in front of the tremolo is a period Supro feature, but it accentuates the choppiness of the tremolo effect to the extent that I’d probably use one or the other, as opposed to both together. Some will like the effect, though. The reverb sound is certainly pleasant, but it doesn’t quite deliver the “enveloping wash” that Supro promises.

Ultimately, I found the Saturn most enjoyable when cranked up with the treble set around halfway and the bass rolled back. With a Tele, I would happily grind out Stones riffs all day; my Les Paul did that snarly late-60s blues rock thing and anything with Filter’Trons could sound punky or Chet-like, depending on how I picked it. 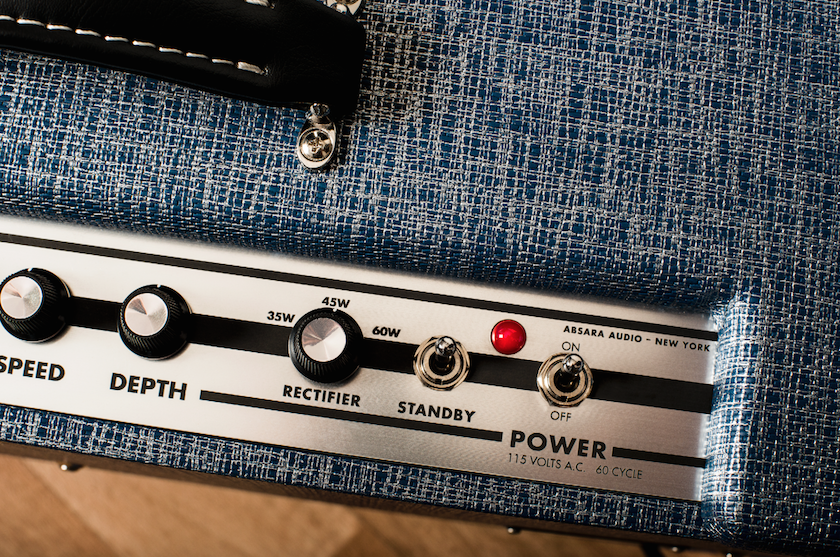 Described as the flagship tube amplifier of the Supro line, the 1650RT Royal Reverb is “designed to deliver superior sonic flexibility and ample headroom, along with enough stage volume to handle any gig”.

The cabinet size, basic circuit design and dual 10-inch speaker compliment are all derived from the original Royal Reverb combo amplifier. However, unlike the original, it doesn’t have separate chassis for the preamp and power amp, nor point-to-point wiring.

The control layout is identical to that of the Saturn, with the addition of a three-way power switch. The 35-watt Class A mode is cathode biased and the 45-watt mode switches to a Class AB grid bias arrangement. The peak power is 60 watts, with a solid-state rectifier taking the place of the 5U4 tube rectifier.

I started with the 35-watt setting and turned the volume up to the break-up point – around 11 o’clock. Compared with the Saturn, the Royal had a little less sparkle, and it was actually quieter, but the low-mid bump was less noticeable and the bass was tighter.

Maintaining the settings, the 45-watt mode sounded a tad cleaner and the top end gained a bit more clarity, but again the volume stayed more or less the same. I noticed the biggest change in the 60-watt mode, where the transient response was quicker, the low end was significantly tighter and everything had a little more punch.

The tremolo depth also changed dramatically, and it seems to work in a more conventional and effective manner in 60-watt mode. Depth settings that are barely audible in 35-watt mode become increasingly strong and powerful as you switch to higher power.

Like most powerful amps, the Royal needs a bit of volume before it really comes to life. With volume set around 2 o’clock, it opens out and begins to sparkle in a way that the Saturn can’t match. Both the 45-watt and 60-watt modes scoop the mids into a blackface direction, but bizarrely, the 35-watt mode always seems loudest. In practice, the power switch serves more as a headroom and transient shaper than a level control.

Given the wider frequency response, the tone controls have more to work with, so the Royal is much more versatile. You can still do the bluesy lo-fi thing, but the Royal can also emulate a range of classic US and UK tones. Like the Saturn, it has a smooth and chewy overdrive characteristic that stops short of high-gain crunch.

Although you may find street prices cheaper than those quoted here, the price tags nudge the bottom end of the boutique market, but the same can’t be said of the electronics. Discerning ears will hear the difference, too.

Much as I wanted to be blown away by these Supros, both fall slightly short of the pretty, harmonically complex treble and supernatural touch sensitivity I associate with really nice hand-built amps. They also sound a little dull when you turn down your guitar’s volume control, regardless of whether you have a treble bleed capacitor. All that said, they’re certainly worth trying because there’s much to like here, particularly in the case of the more versatile 2×10 Royal Reverb. 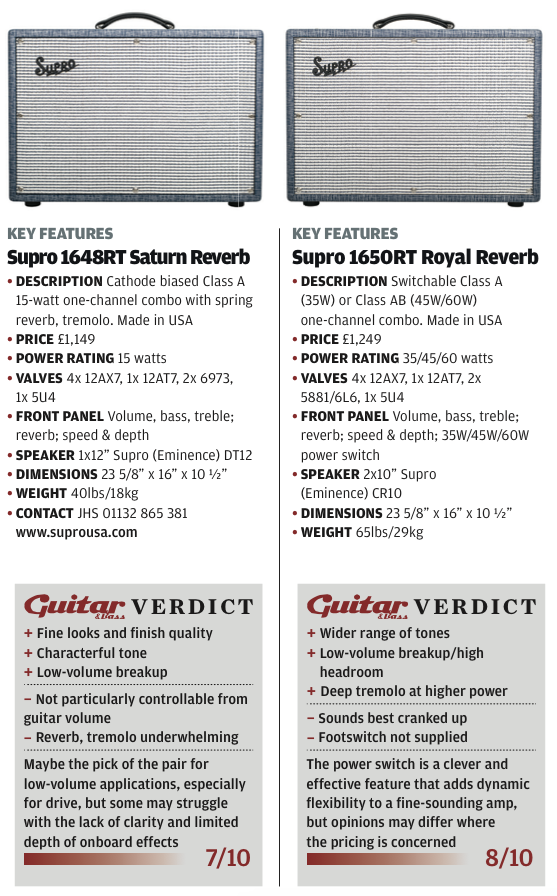