For beach, garden, studio or even light stage use, this Tanglewood is a great value entry-level electro-acoustic bass. 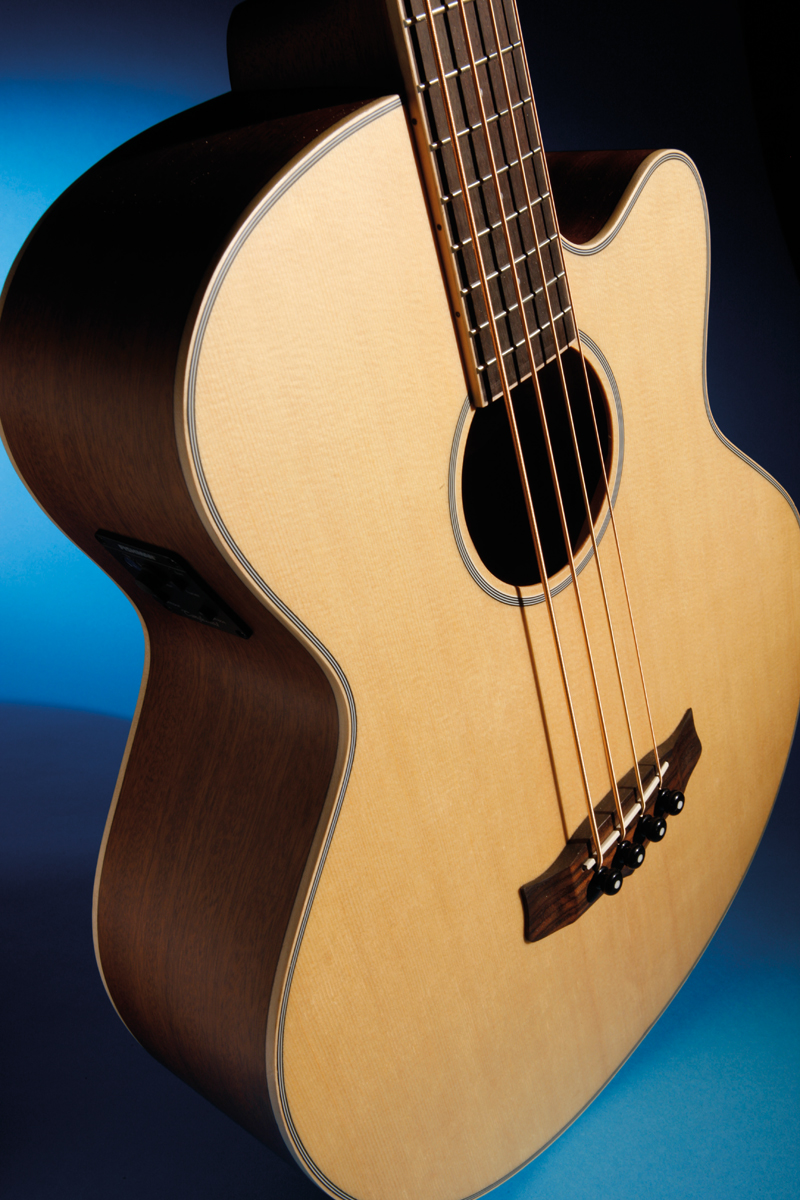 Tanglewood Guitars, founded in London in 1988 and now based primarily in Biggin Hill, Kent, have gained a reputation for designing good-looking, well-made, reliable instruments, heavy on value for money.

Our last outing with a Tanglewood bass was with the solid-body Canyon III in the September 2008 issue (Vol 19 No 9), an active belter in a classy natural finish, but the bulk of Tanglewood’s output is in the unplugged sphere. There’s a wide range of affordable but nice-to-play acoustic guitars, and the Evolution Series still offers entry-level instruments of excellent quality. 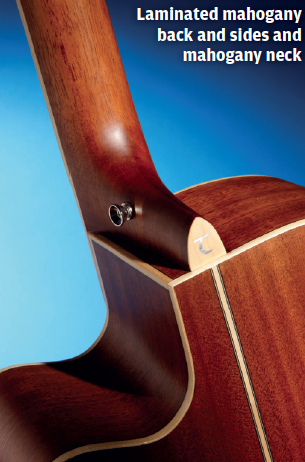 Recently Tanglewood has added some bottom end to the series courtesy of the Evolution IV TAB1 CE acoustic bass. One of the main things to bear in mind about acoustic basses is, well, the size.

The TAB1 is bulky, measuring 116mm top to back; that’s not as huge as early unamplified acoustic basses of the ’70s such as Guilds, Fyldes or Earthwoods, but at nearly three times the depth of, say, a Jazz Bass, you’ll definitely feel it under your arm.

On top of that there’s no let-up via such comfy appointments as forearm or ribcage chamfers. Never mind; forced acclimatisation is the only option, and basically you need to swing your elbow out and away from your side, letting your wrist move slightly further forwards from its standard resting-forearm position.

Sitting with the TAB1, your elbow will be almost in line with your shoulder, which sounds a bit awkward but doesn’t take too long to feel at least functional.

Build-wise the TAB1 has a laminated spruce top and laminated mahogany back and sides, with maple binding all around, a maple backstrip, black and white purfling, and a matching soundhole rosette. This tidies up the joins and adds a nice visual detail, especially in framing the soundhole at the foot of the fingerboard.

The upper bout meets the neck at the 16th fret, but a cutaway gives access right up to the 20th fret. It’s a full 34″-scale bass, and one interesting aspect is the Tapered Parallel Bracing system, designed by US-based Swedish luthier Michael Sanden of Sanden Guitars fame, consultant at Tanglewood for over eight years.

Sanden’s brief was to ‘develop a bracing system that would release the intricate and delicate tonal character of the spruce tops’, offering ‘solid construction… with increased emphasis in locations of particular high stress’. It’s all about attempting to maximise or enhance the contribution the wood makes towards the sound.

The neck – which is glued in via a mortise and tenon joint – is made of three pieces of mahogany and carries a neck-end strap button sited in the best position, balance-wise, on the treble side, and also has a cool maple heel-cap with classical silver ‘T’ logo. 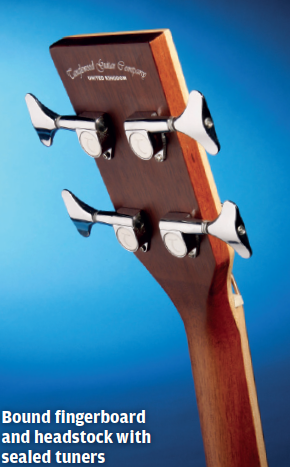 The main section of the neck is pretty close to optimum depth – shallow enough to feel comfortable and pretty fast under the hand, but with a reassuring mass. The spliced-on headstock carries a white synthetic Graphtec

Nubone nut and is faced in black with maple binding with black/white framing. The tuners are chrome closed-gear types with reassuringly grippable buttons.

The bridge is a big chunk of rosewood with a white Nubone saddle, and the strings are secured by black ABS thermoplastic bridge pins. Should a situation arise that necessitated more adjustment to the set-up than a slight trussrod tweak, the only option is skilful re-shaping of the saddle, which would be a good reason to visit your friendly local luthier.

The TAB1 has an onboard preamp powered by one 9v battery housed in quick-release compartment on the side of the lower bout. Tanglewood fit Fishman’s Isys unit which comes with a Volume dial and a Contour button which you depress to access a scooped mids sound and a phase reverse button which can come in handy for nullifying feedback. There’s also an on/off button for the onboard tuner.

Sound
Because it’s so light, the TAB1 – as with any hollowbody bass – provides a virtually stress-free physically option and is eminently comfortable in seated mode, probably the most popular playing option. Perhaps the most important question with any acoustic bass is – does it pass the back garden test? You know the one… garden chair, sunny day, cold beer?

Well, the acoustic sound is quite full – not properly fat, but it has a lively bottom end, a clean midrange with plenty of substance and natural-sounding highs that speak with a melodic purity that’s devoid of synthetic snappiness.

Plugging it in is pretty rewarding, but don’t expect massive amounts of bottom end unless you EQ it in via an amp. As with any acoustic bass, the TAB1 isn’t built to have the natural tone creation and projection of an upright bass; you certainly feel the E string, but any badly-hung pictures around the house are in no danger of falling off the wall. There are plenty of lively harmonics and a pleasing acoustic rasp; it’s an enjoyable noise and a pretty accurate amplified version of the acoustic sound.

The midrange is dark enough for substance without being muddy, promoting clarity without a hint of nasal bias and the top end is equally well-attenuated, although it feels just a touch more stunted than the treble exhibited by acoustic sound. The G string is sharp without being brittle, and thinner strings have enough body to make melodic excursions enjoyable.

In terms of stage use, whilst you can’t stand right on top of a loud amp, the Phase button does help keep the TAB1 under control at higher volumes, although whether it makes the bass fatter in quieter climes is a moot point. Activating scooped mids via the Contour button does get you that woolly, glassy sound, which is nice, if you like it. 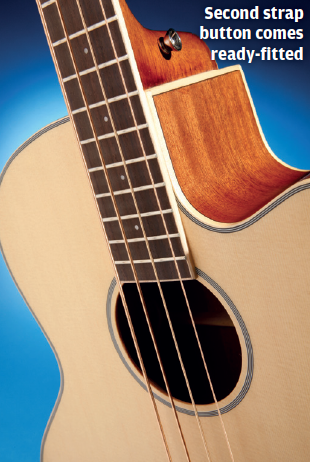 Verdict
There’s been an upsurge of interest in acoustic basses in recent years, so new additions are coming up against stiffer competition all the time. Tanglewood’s TAB1 is a good bass, great to play and excellent value for money. Whether the new-fangled bracing system has that much of an effect or not, the TAB1 exudes a high quality acoustic tone; plugged in, while not quite a match, it’s eminently practical.

The build quality is really good and all the features and elements are well-organised, which, combined with an asking price under £300, makes it a fine and affordable option. Overall, recommended. 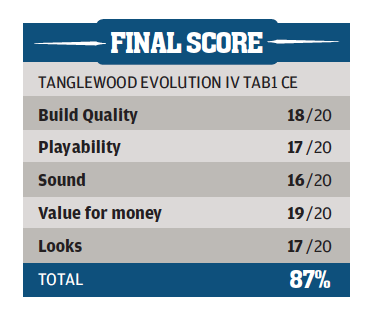