Forget all you know about maple. Taylor’s new-look 600 Series is here to challenge your preconceptions. Rick Batey takes a look… 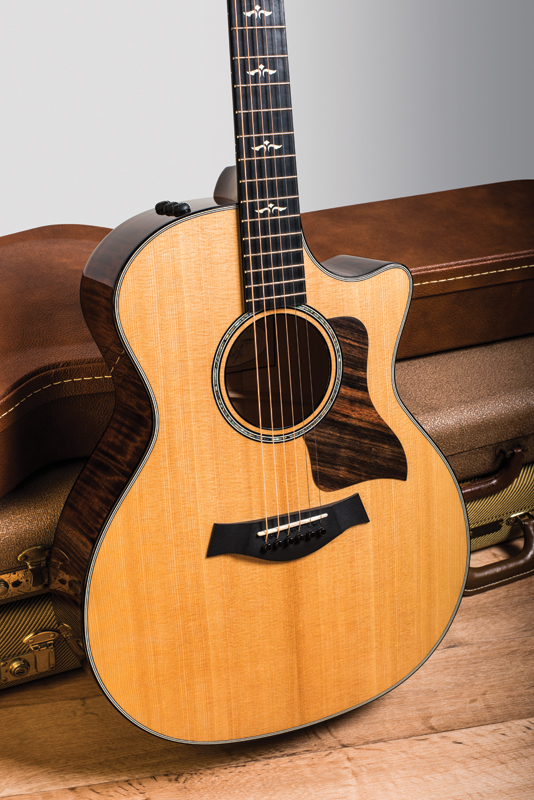 The story with the 2015 Taylor 614ce, in a nutshell, is that we’re seeing all the structural and cosmetic changes implemented by new master luthier Andy Powers trickling gradually down through the series. He began by completely reworking the 700s and 800s (we reviewed the 814ce in August 2014), and now it’s the turn of the maple 600 Series guitars.

Maple has perhaps one of the most undeserved reps of all guitar woods. Clear, hard, bright, transparent – those are still the first words that come to mind, despite all we know about the variations you can find in vintage Gibsons and Guilds, not to mention archtops. Maple is stable, fairly easy to work, has some beautiful figuring and is – very importantly – sustainable; and now Taylor is aiming to annihilate that `clear, hard, bright’ notoriety once and for all with the four-strong 2015 600 Series and, trust us, they’ve gone about the task with quite some vim.

The first big alteration is the introduction of a torrefied sitka spruce top. Torrefaction – a procedure also used by Martin guitars, Bourgeois, Huss & Dalton and others – is a thermal process that aims to improve resonance and lessen the effects of humidity, and it also darkens the colour slightly to a more aged-type hue.

The top finish is still gloss, but thinner than before (Taylor claims just 3.5 thousandths of an inch), revealing the grain lines in a consistent yet appealingly handmade-type way. The top bracing has been redesigned completely, and the back bracing – which is angled, not straight, and stops short of the edges to free up the back for maximum responsiveness – is tweaked specifically to wrestle the best from the maple construction. Protein glues have been used at strategic places to make the most of certain wood-to-wood contact points. It all adds up to
a lot of changes.

Continuing with the theme of challenging our maple expectations, Taylor has stained the back and sides a colour called Brown Sugar – a deep, rich shade that manages to let all the handsome flame of the big leaf maple shine though. Picking up the guitar for the first time without glancing inside, you’d hardly guess it was maple at all. The pickguard is striped ebony, the soundhole rosette is a single band of abalone with bold ebony and grained ivoroid bordering, and the familiar swept-wing Taylor bridge is ebony, with ebony pins and a micarta saddle. The neck, too, is maple – satin-finished this time, but stained the same medium brown. 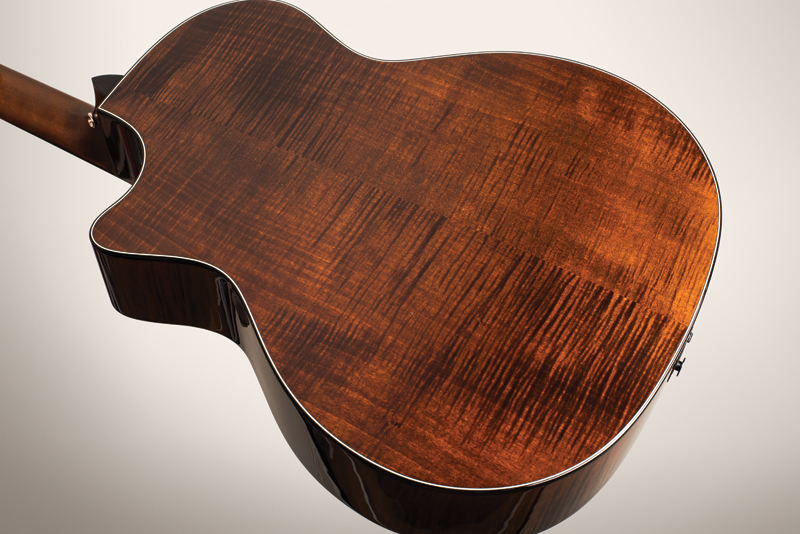 The colouring on the heel isa little patchy, and though the ebony facing at the rear of the headstock with its ivoroid inlay is a posh touch, it just misses the scarf joint where it fades into the neck, giving a slightlyodd look. Around the front, we have a feast of ebony: the fingerboard with its grained ivoroid `wing’ inlays, and the gloss-finished headstock facing with its matching truss rod cover. More ivoroid is employed for the headstock purfling and the logo, and the nut is Tusq. 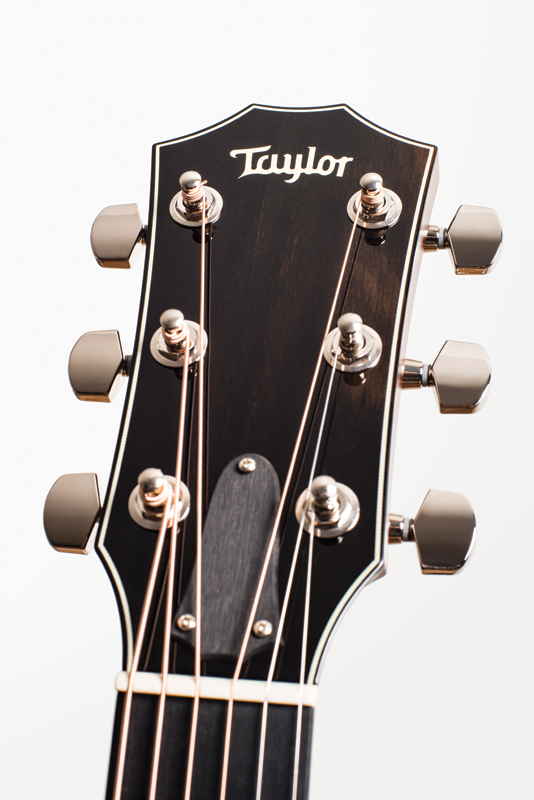 Taylor has long since nailed the art of the easy-playing neck, and this slim example with its slightly wide 38mm nut, gently rounded in profile but with just a touch of `V’ in the lower reaches, is comfy and appealing. The action is low all over; with a pick, it’s possible to force out some fret buzz on the lower strings below the fifth fret, but a touch more relief would sort that.

All the careful voicing notwithstanding, the 614ce doesn’t sound totally unlike a typical maple guitar. There’s good clarity here and a contemporary evenness of sound, but it’s the mellowness, the complexity, the surprising amount of thump from the bass and the notable roundness of the attack to the trebles that raises the eyebrows. The strings surely have a bit to do with this – these are Taylor’s special-spec Elixirs with a heavy top and a skinny bottom – but single-note lines are endowed with a softness and impact that’s still quite unusual for maple.

As ever with Taylor’s Grand Auditoriums, this guitar delivers well both as a fingerpicker and a flatpicker, but it’s as a vocal back-up guitar that it perhaps shines best, with a sensitive, bouncy midrange and a stentorian richness at the bottom end that all adds up to a fine, full pillow of sound.

The ES2 system represents a move back to the centre-ground of accepted electro-acoustic tone after the complex body sensors and neck pickup of the ES1. Here, the three sensors are placed just behind the bridge saddle, rather than beneath it, and you can fine-tune the string balance by altering the pressure on the sensors via the bridge tension screws. 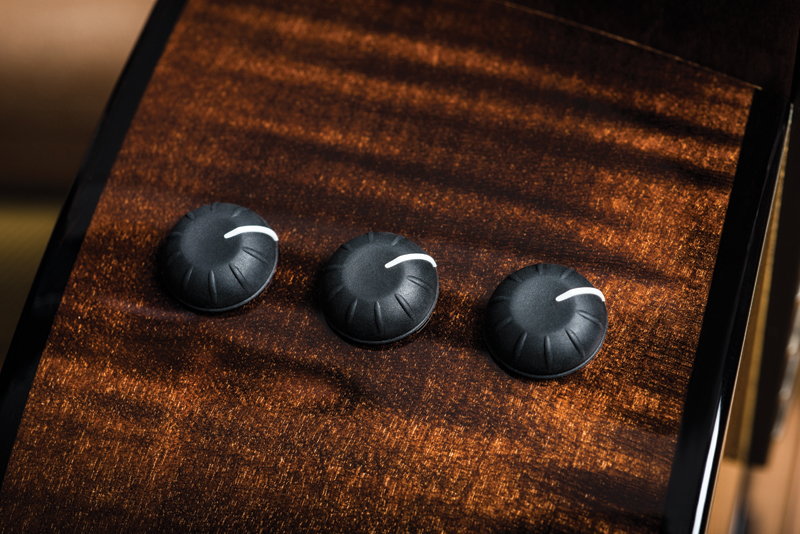 The sensors are linked to three upper rim-mounted centre-detented controls for volume, treble and bass (though there’s no mid control, you can access a degree of mid-scoop by advancing the treble and bass). Inside the guitar, on the edge of the circuit board behind the controls, is a mini switch for phase reverse ± not easy to reach without putting the guitar flat on your lap and forcing your hand past the strings.

It’s a pretty simple, what-you-see-is-what-you-get arangement, and though the tone is in the bridge-piezo ball park and has a fairly breathy attack, it’s likeably quack-free, with no undue harshness. The battery is located by the endpin, and it’s a cinch to change. 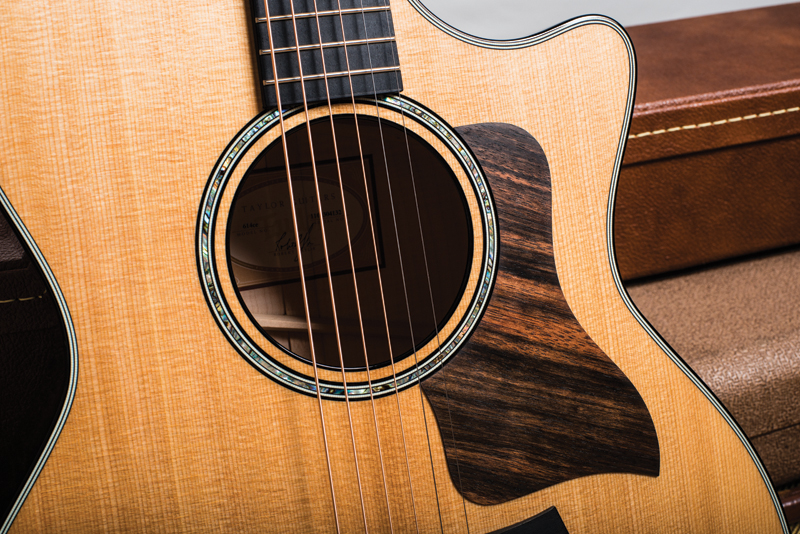 Taylor’s success with the new 614ce, to force an automobile analogy, has been to coax a high-end, luxury experience out of a guitar that you might have expected to offer a rather harsh ride. To push that comparison further, it’s a bit like a Lexus: totally smooth, very well-honed, hard to fault and definitely not cheap. Looking at the bigger picture, we’re going to see a lot more torrefied spruce this year than last, and the use of sustainable maple in high-end guitars is surely only going to increase as the decades roll on. If the 2015 614ce is a harbinger of that sonic future, then the future’s looking – and sounding – pretty good. 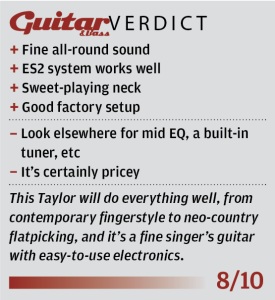