Taylor’s revolutionary V-Class bracing makes the jump to its 600 series in the shape of two 614ce Grand Auditorium models. Michael Watts finds out if V-Class is permanent…

Taylor Guitars is no longer the young upstart that shot to prominence seemingly out of nowhere in the late 1970s. Never strangers to controversy in the quest to build the finest instrument possible (remember when people balked at the company’s bolt-on NT neck joint?), Taylor’s new V-Class bracing has led to much pearl clutching among the more conservative members of the acoustic guitar community. We welcome any move that makes for a more responsive and inspiring musical instrument and have been looking forward to seeing more examples of this bracing system as it filters through the Taylor range.

Here we have two versions of Taylor’s long-established 614ce Grand Auditorium model. The 614ce has traditionally found most favour as a stage instrument (and both of these guitars come with Taylor’s ES2 active pickup system) but with a more open sonic palette afforded by the new V-Class bracing system, there’s every reason to expect excellent acoustic performance, too. 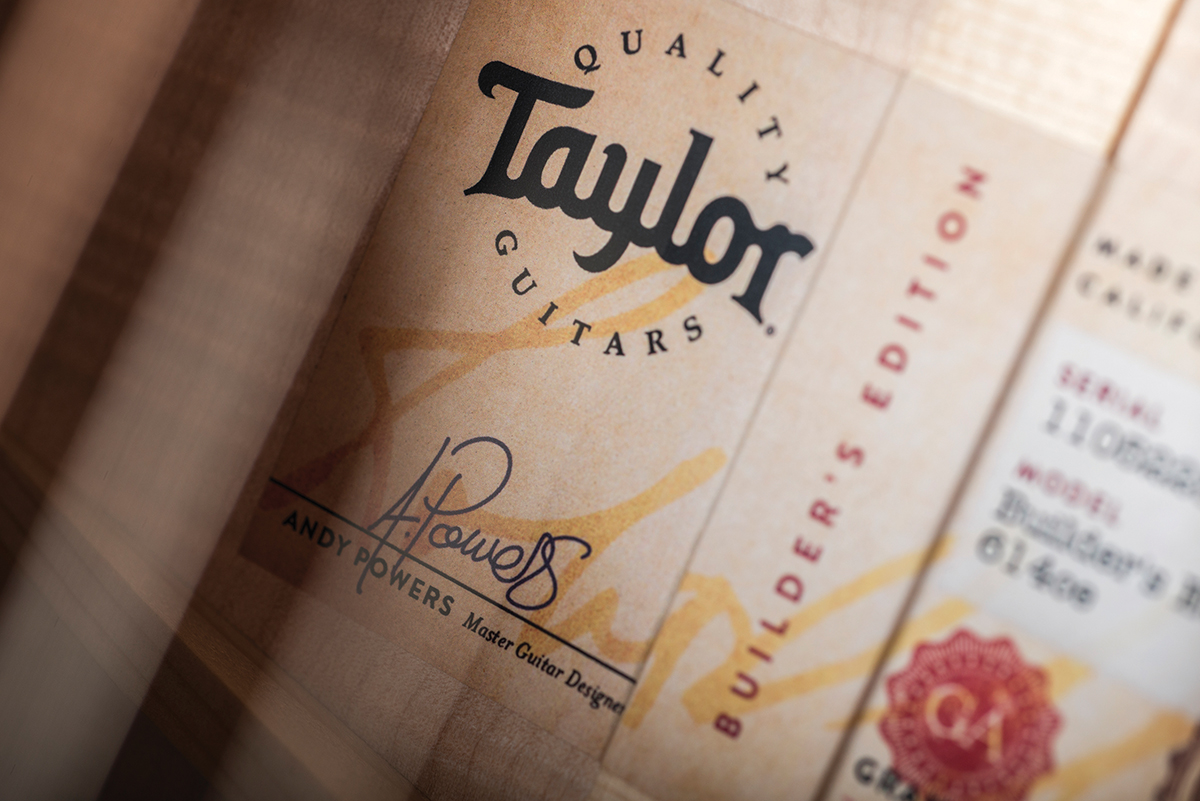 Back in the day, Taylor 600 series guitars would often feature quilted maple. In this case however, we have two beautiful examples of the denser, flamed variant under a dark stain. Bob Taylor’s heir apparent Andy Powers has been very vocal about his love for this great tonewood and its historic role in the creation of superlative instruments. Maple has long been a wood that divides opinion and it’s true that if you approach it with the same thicknessing and voicing measurements as rosewood or mahogany the results will be unlikely to unlock the timber’s full potential.

However, when its more latent characteristics are unleashed the wood is capable of providing a huge dynamic and sonic range, proving as inspiring for the singer/songwriter as it is for the solo fingerstyle player.

Incidentally, both these guitars feature torrefied Sitka Spruce tops, an increasingly popular approach which uses heat treatment to dry out the wood, often lending a smoother, more mature timbre to the instrument. 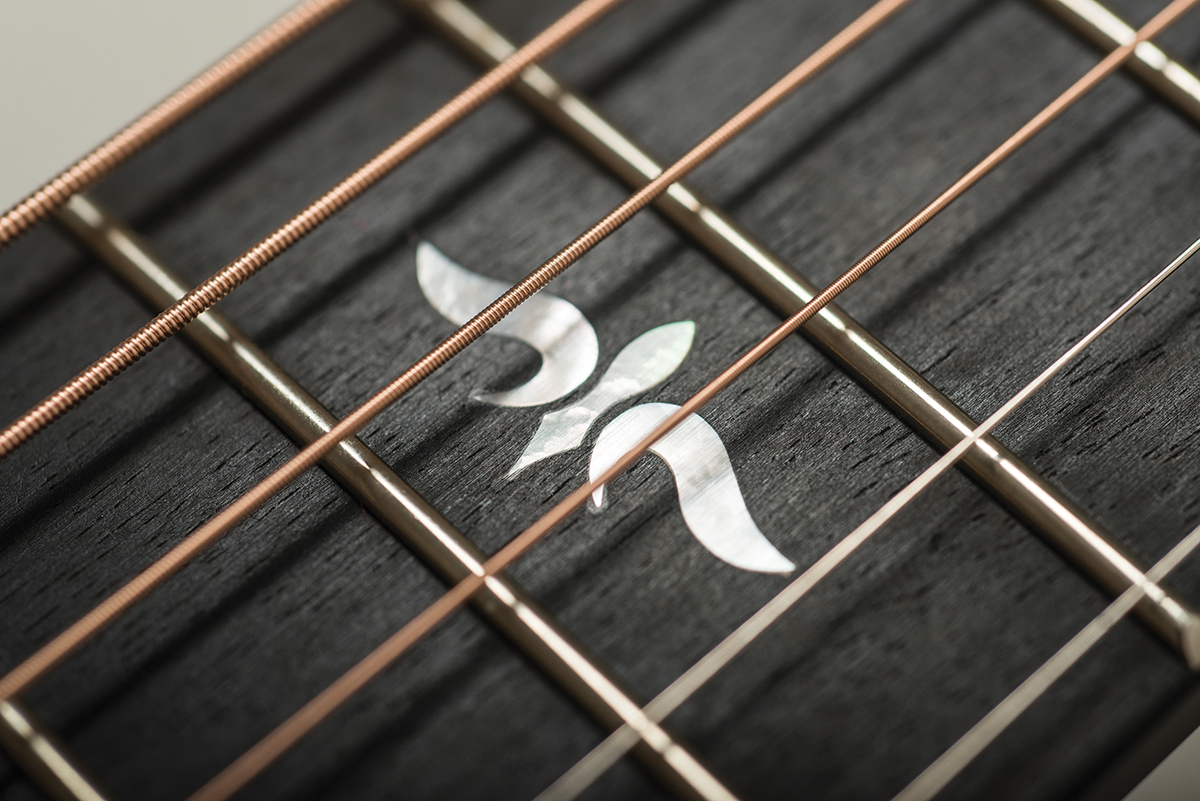 Looking more like a sole luthier-built instrument than a production guitar, the Builder’s Edition of the 614ce features rounded edges and bevels for the forearm and cutaway reminiscent of the work of luthiers such as Kevin Ryan or Bill Tippin. 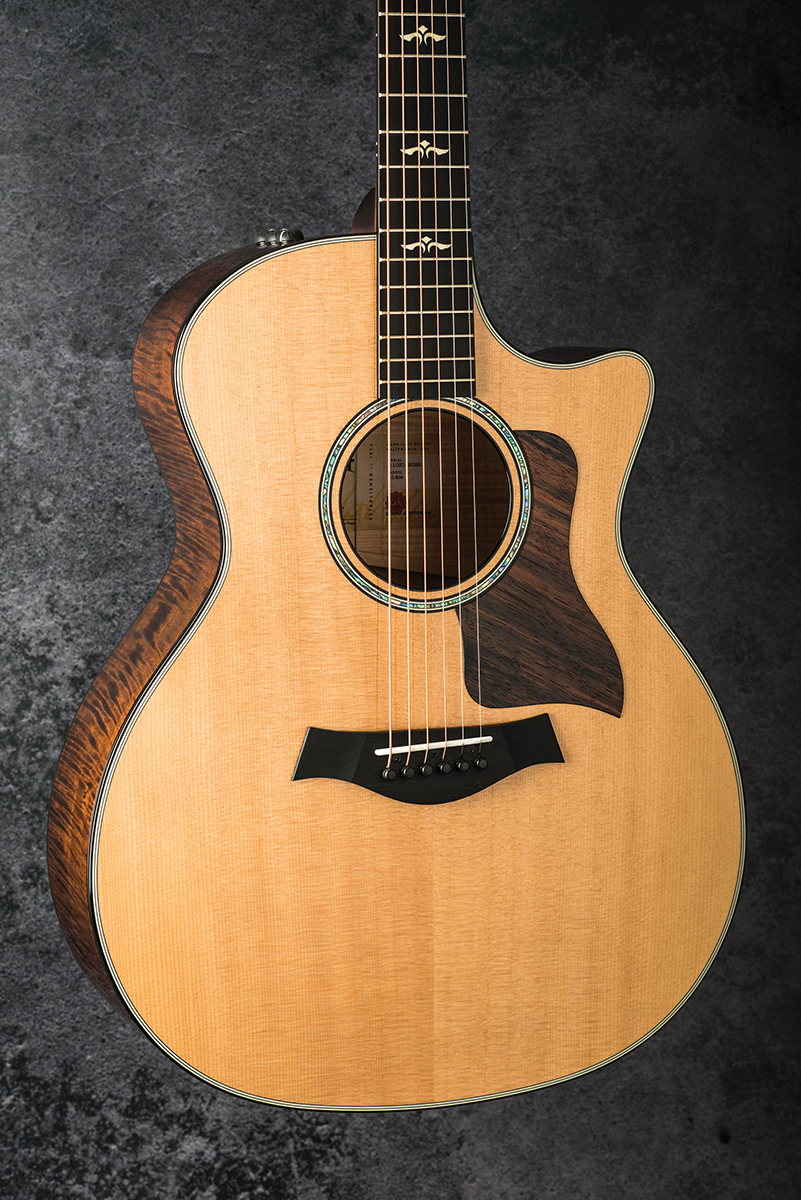 This ergonomic approach makes the guitar’s 16-inch lower bout immediately more approachable, certainly for the forearm. The cutaway bevel, while visually attractive and well executed, makes less practical difference as access to the very top frets is still a stretch due to the depth of the heel.

While this guitar feels very comfortable against the body, the weight of the rock maple neck and Gotoh tuners combined with the rounded edges and Silent Satin finish can sometimes make it challenging to keep in place for the seated player. Again, this is not an issue when played standing. 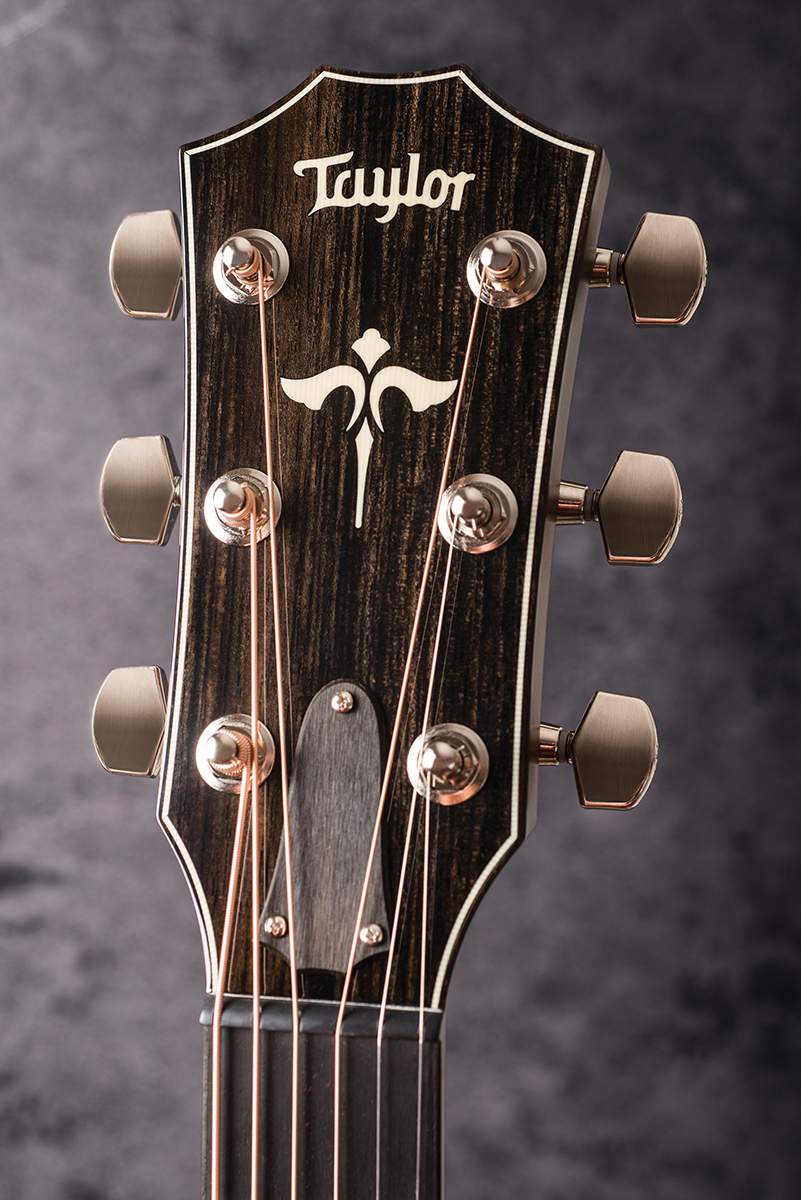 Sitting down with the regular 614ce, it’s immediately apparent that Taylor’s V-Class bracing adds stiffness along the centre of the top. In effect this controls the long dipole (the vibrations along the length of the soundboard) while the routed braces (with only the upper and lower transverse braces meeting the kerfing of the guitar) open up cross dipole movement leading to an increase in bass response and a more immediate attack. The human ear interprets most of the character of a sound from the attack itself and this increased responsiveness and immediacy gives a sense of clarity and presence to both player and listener.

From the point of view of timbre this guitar has everything you’d expect from a Taylor. Shimmering highs (smoothed off no doubt by the torrefied top), scooped mids and a workable, but never overpowering bass end. It’s an updated, more sophisticated version of the classic maple Taylor sound. Open tunings sound detailed and rich and there is good balance along the whole fretboard. As you’d expect, playability and intonation are excellent throughout. 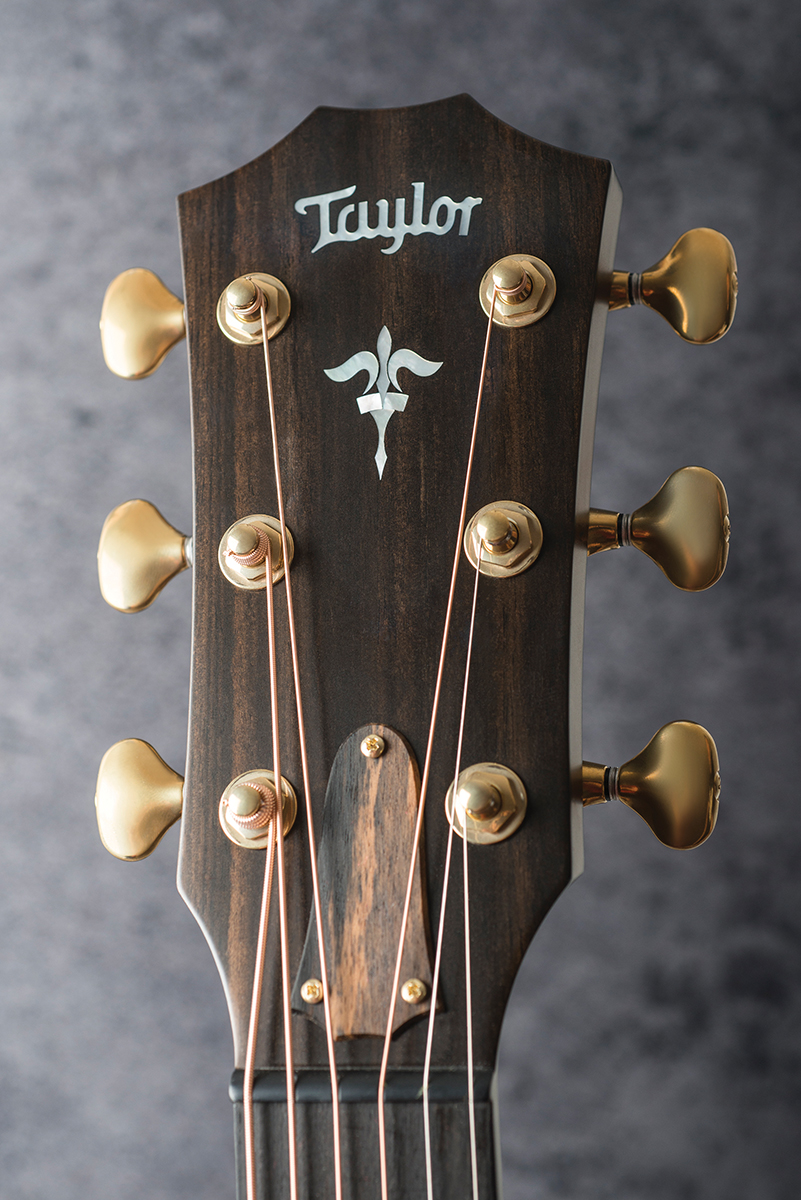 The Builder’s Edition is, of course, a more refined take on the theme. Bevels can often affect the bass response of an instrument but despite the reduced surface area of the top, this still has an open voice, which comes into its own in altered tunings. There’s no scratchplate, suggesting that the guitar is aimed more at the fingerstyle player than the plectrum enthusiast. Nevertheless, there is headroom to spare when you dig in with a pick.

Particularly worthy of note is the Silent Satin UV finish in this case in Taylor’s Wild Honey Burst stain. Those of us who have used satin-finished guitars in the studio will have learned all manner of manoeuvres to prevent body squeaks and rubbing sounds while recording. In this case unwanted noise is all but eliminated. 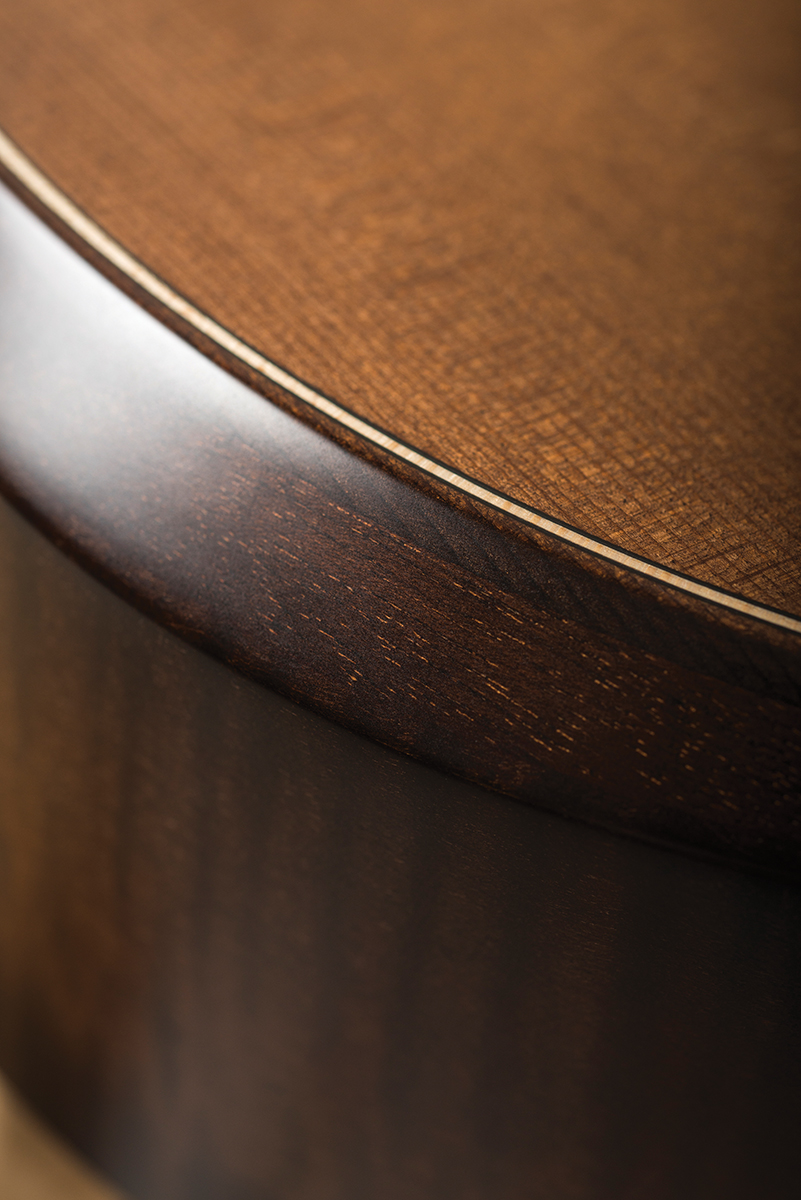 Plugged in, both instruments sound very natural, the ES2 active pickup being a massive improvement upon the piezo systems in earlier iterations of the 614ce. Going through a dedicated acoustic amp both guitars sound full and powerful and when recorded directly to the desk the results are impressive. The slightly scooped midrange also makes both instruments ideal candidates for supporting vocals.

Taylor guitars are famed for their impeccable finish, playability and clear tone. These two versions of the 614ce model will exceed the standards demanded by guitar buyers even at this not inconsiderable price-point, and also demonstrate that this pioneering brand remains determined to challenge conventions in guitar building. 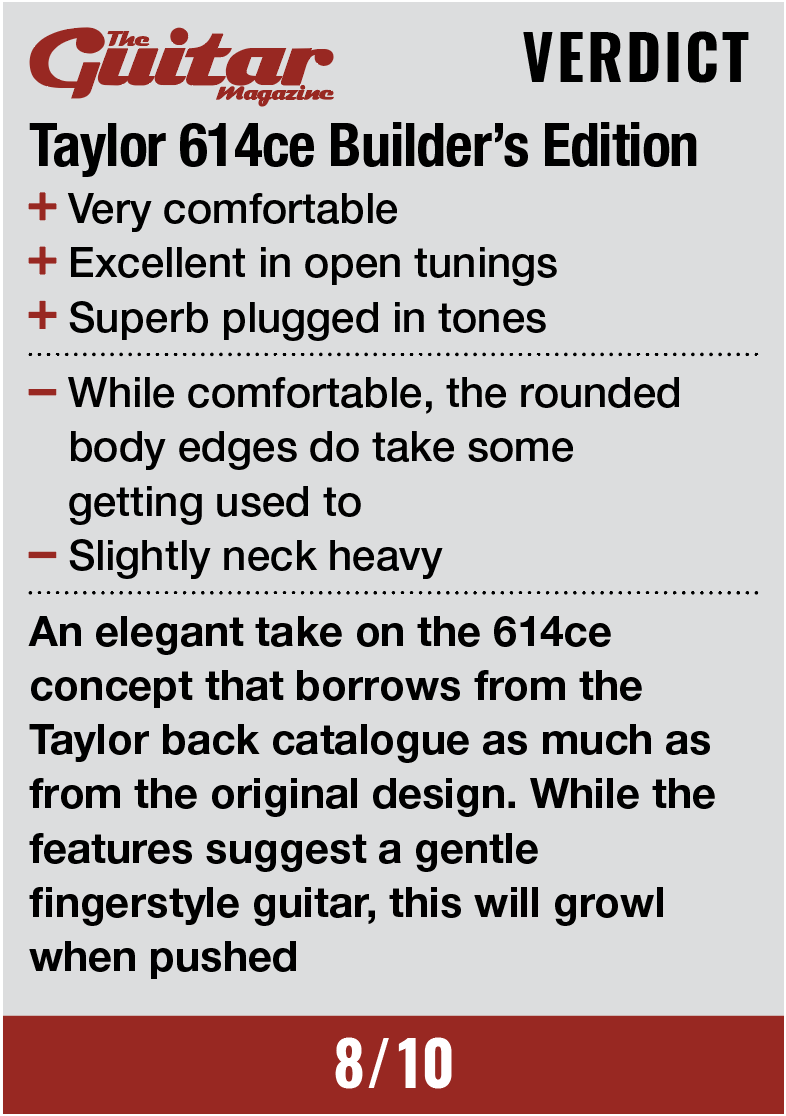 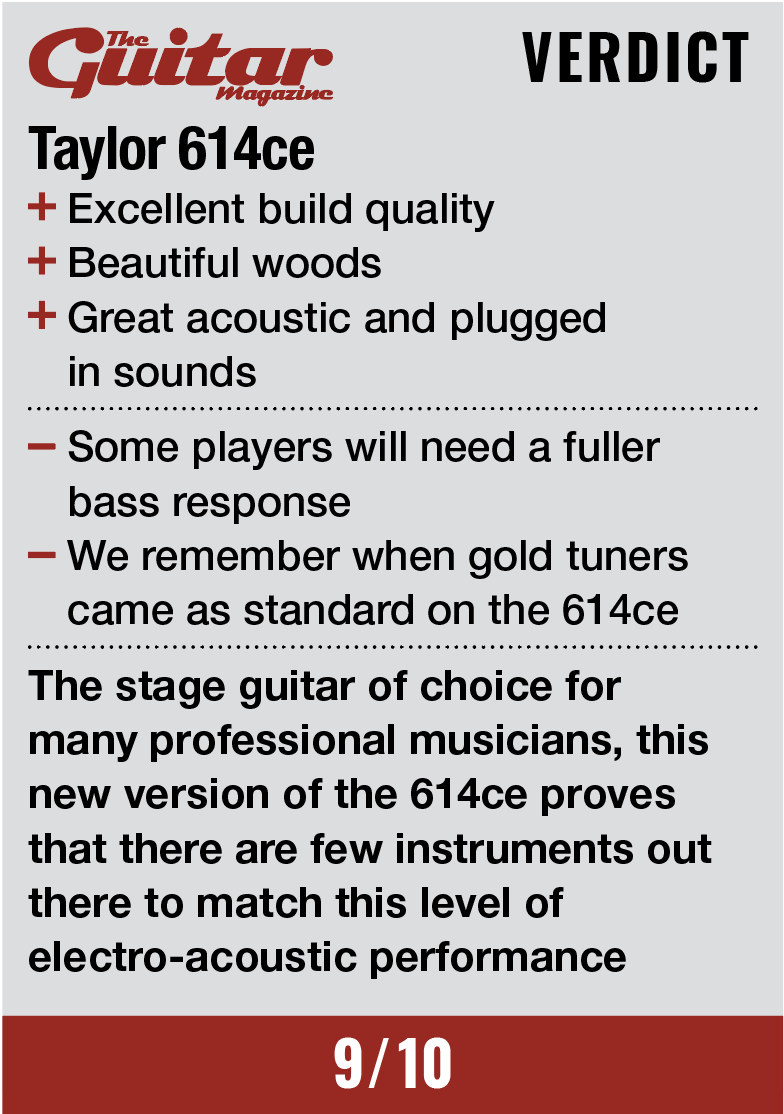