Taylor has updated its popular 700 Series acoustics, refining the range’s looks and tweaking the designs for a more powerful voice. We saddle up the 12-Fret model… 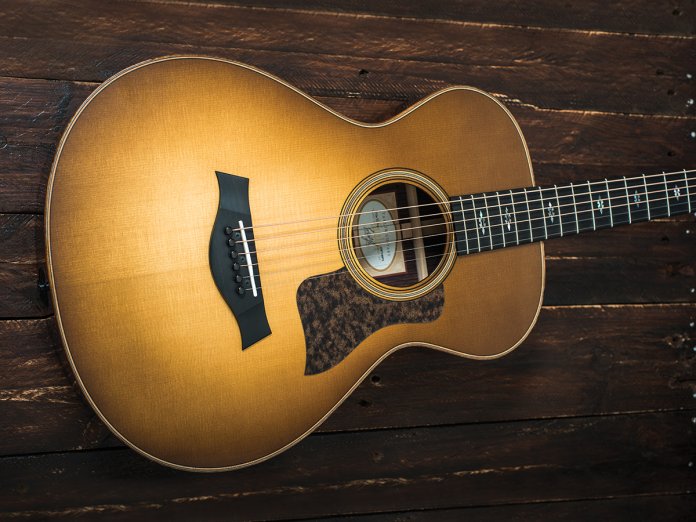 Taylor brands its newly ‘revoiced’ 700 Series as a ‘Rosewood Reboot,’ promising a richer tone together with refined ‘neo-vintage’ style. Predictably enough, the first thing that grabbed us was the Western Sunburst gloss finish. It’s beautifully done and a remarkable shade of soft brown graduating to honey amber in the middle. It doesn’t look like a vintage burst, but it doesn’t look particularly modern either: ‘neo-vintage’ is a perfect description.

Flipping the body, we see straight-grained Indian rosewood with a deep chocolate brown and a hint of violet. A pin-neat koa centre strip matches the koa binding, all of which comes from Taylor’s sustainable tonewood project in Hawaii. Douglas fir is used to create a herringbone effect for the purfling and rosette, with thin bands of black separating the layers. It’s all executed with real precision; the result is striking, yet subtle and harmonious.

Like the rosewood back and sides, the Lutz spruce top is solid – it’s a naturally occurring hybrid of white and sitka spruce that is claimed to be similar to Adirondak spruce in tone. The fingerboard, bridge, pins and peghead overlay are all ebony, with a tropical mahogany neck. As usual, Taylor has stacked the heel and scarf-jointed the slotted headstock; the finish has a smooth, fast satin sheen.

We think the abalone position markers and headstock logo sit beautifully with the warm sunburst tones. The bespoke open-gear tuners look the part, too, and we like the ivory-grain effect on the off-white buttons. As a design, it has flair and coherence, with none of the stark contrasts of older Taylor models.

Taylor seems to have a one-size-fits-all approach to pickups and every electro-acoustic Taylor in the catalogue now comes fitted with an Expression System 2 (ES2). It’s a sleek and low-profile design, with three controls on the upper bout and three piezo sensors located behind, rather than under, the saddle. 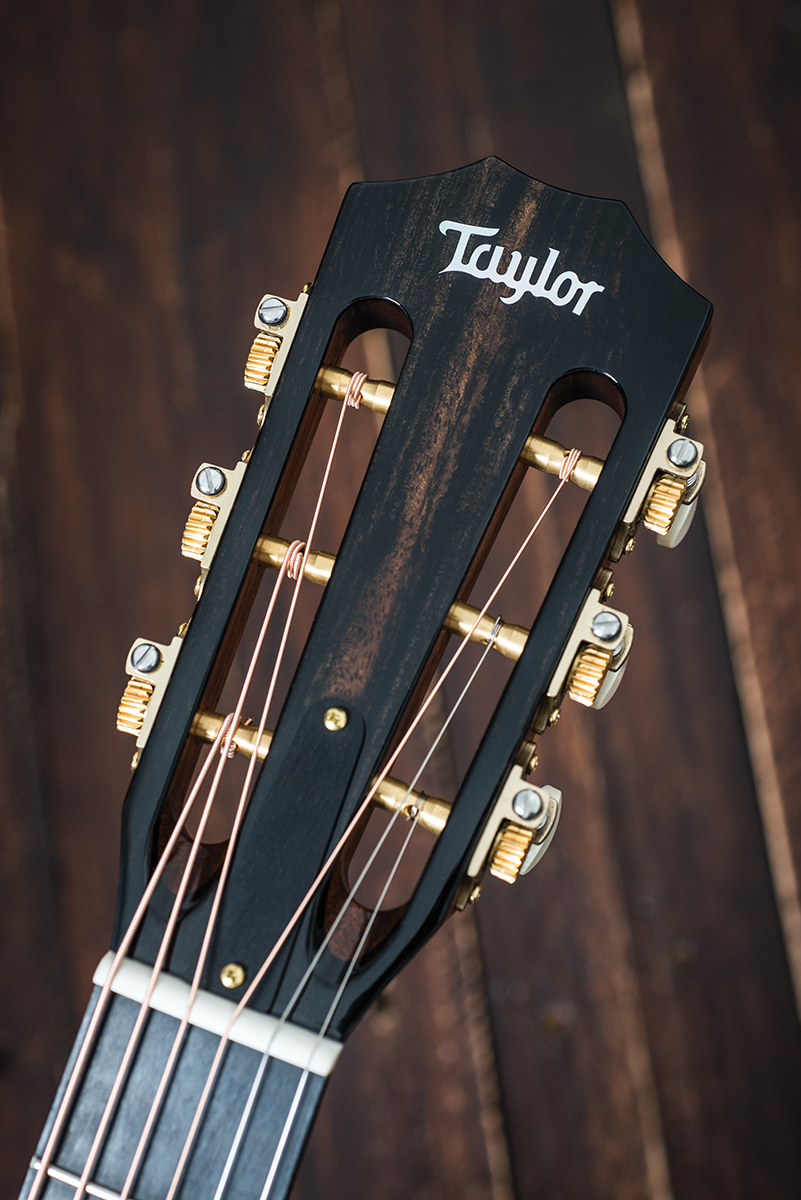 Frankly, it’s hard to imagine how an acoustic guitar could be easier or more comfortable to play than this. It’s likely down to the combination of low but buzz-free action, the short-ish scale length and the expertly slotted nut. Then there’s 38mm string spacing at the nut that’s equally picker and strummer friendly. The neck contributes, too, with a slim but not skinny profile that walks an assured line between vintage V and modern C. With the satin finish, it’s grippy but fast, and the overall vibe is of instant familiarity. 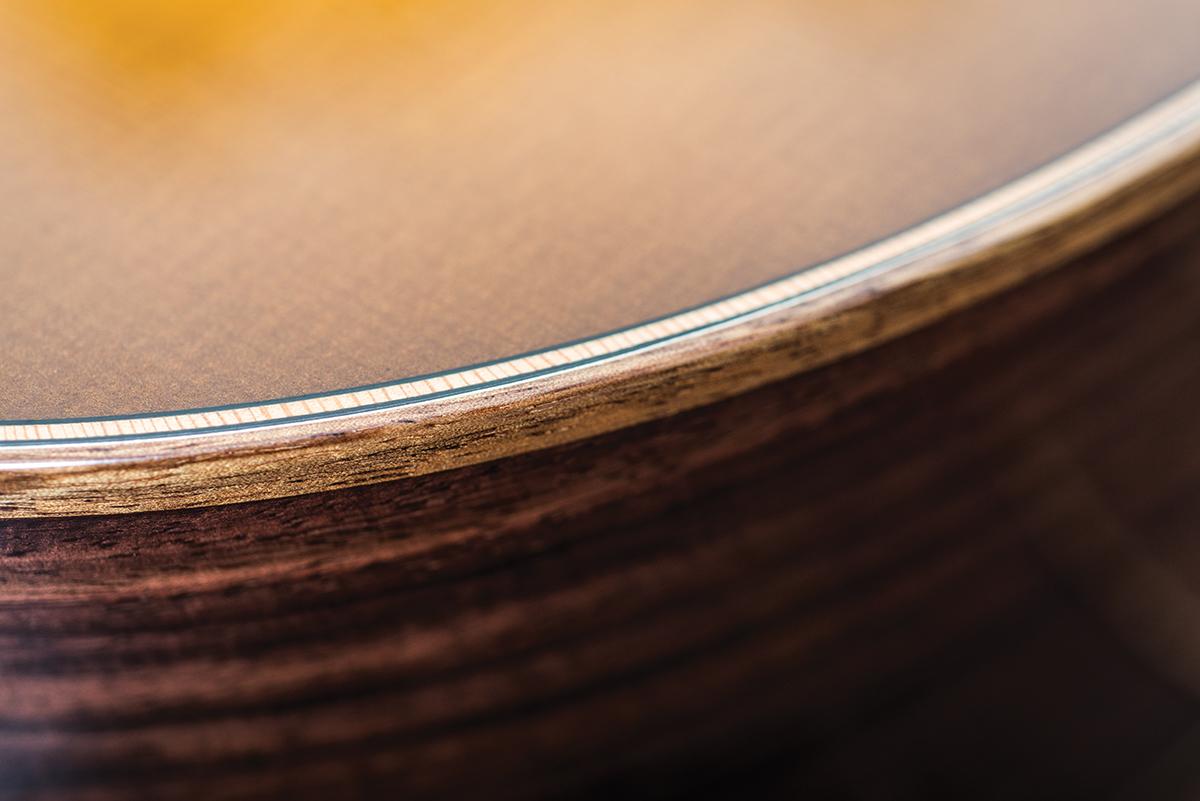 Much the same could be said of the acoustic tone, because it has a dynamic immediacy that feels as though someone has spent the last few years playing the guitar in for you. We first noticed it with the bass end’s warm punchiness and unexpected depth. Although the bass is well defined and has a nice hint of snappiness, the overriding characteristic is soft and slightly thuddy woodiness that really encourages you to dig in.

Treble response is another pleasant surprise. Fresh spruce and rosewood, in conjunction with a medium-sized body, can be a bright-sounding combination. However, the 712e displays a mellow maturity, which is by no means short on harmonic complexity, yet steers well clear of metallic ping. Instead, there’s a very strong fundamental frequency, with more than enough overtones to add interest without cluttering chords or overpowering the lower registers. 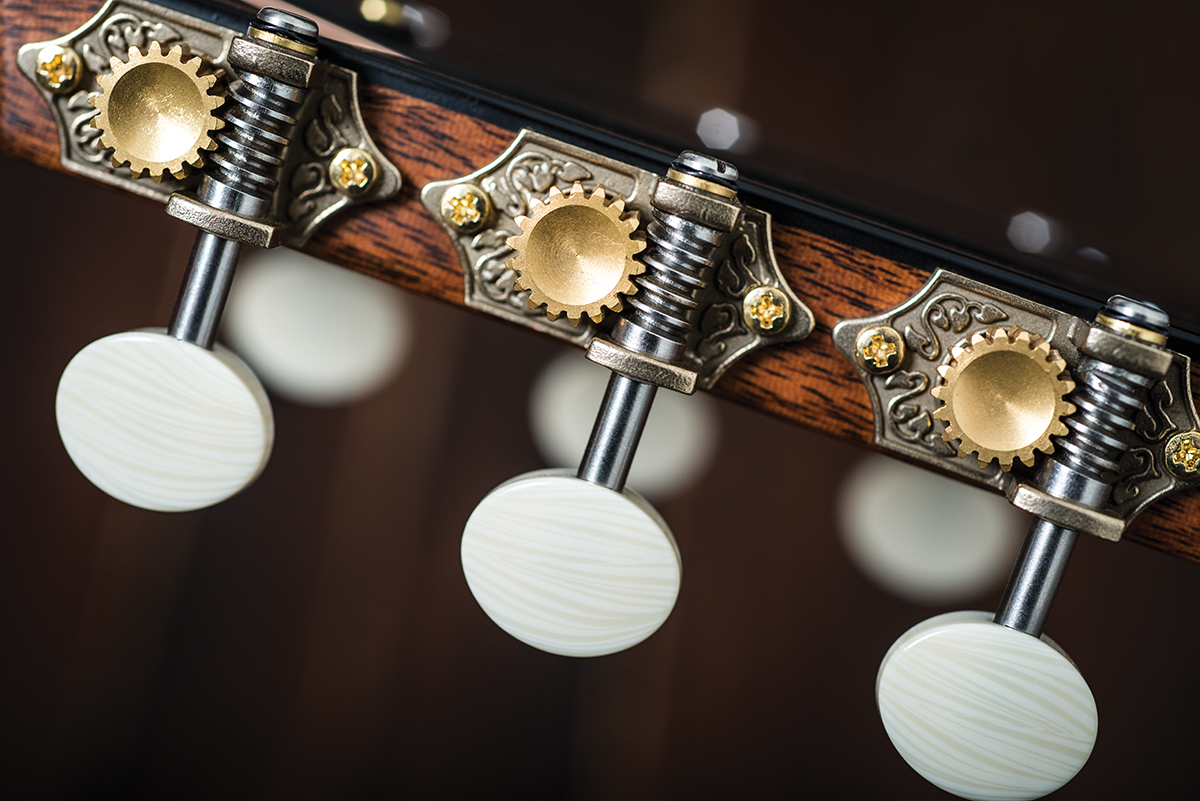 However, the characteristic that really sets the 712e apart is its string-to-string balance and well-behaved nature. In a nutshell, it’s very easy to play smoothly on this guitar, so if your fingerpicking technique isn’t quite as well honed as it could be, the 712e is very forgiving.

Sonically, the 712e spans the eras – much like its neck profile. It’s not an especially loud guitar, but it’s perfectly loud enough and never sounds forced or crashy.

There isn’t even a trace of small-body boxiness and the midrange is both full and forward. Although perfectly suited to roots-related styles, it doesn’t coerce you into a stylistic corner with a sonic identity that’s too identifiable. In open tunings, it has a fluidity and balance few vintage guitars offer, but it’s perhaps not bright or percussive enough for the ‘beatbox’ playing styles of recent years.

Having reviewed several guitars with the ES2 of late, we expected more of the same. But that’s not quite how things turned out. Firstly, the ES2 on this guitar has no audible noise floor – hiss and hum are entirely absent and there’s no discernible resonant frequency.

Instead, you’re presented with a very convincing electrified version of the natural acoustic sound, with the facility to gently tweak the bass and treble. The behind-the-saddle transducer placement ensures the sound and dynamics bear little resemblance to most undersaddle piezo systems and, by any measure, the ES2 produces professional-quality sound in conjunction with the 712e.

Open-tuning specialists may find the tuners a tad stiff for quick changes, but they’re rock solid and Gotoh 510 tuners are an optional extra. We’re not entirely convinced by the ‘weathered brown’ pickguard: we assumed an opaque protective layer of plastic was covering it until we researched the specs. 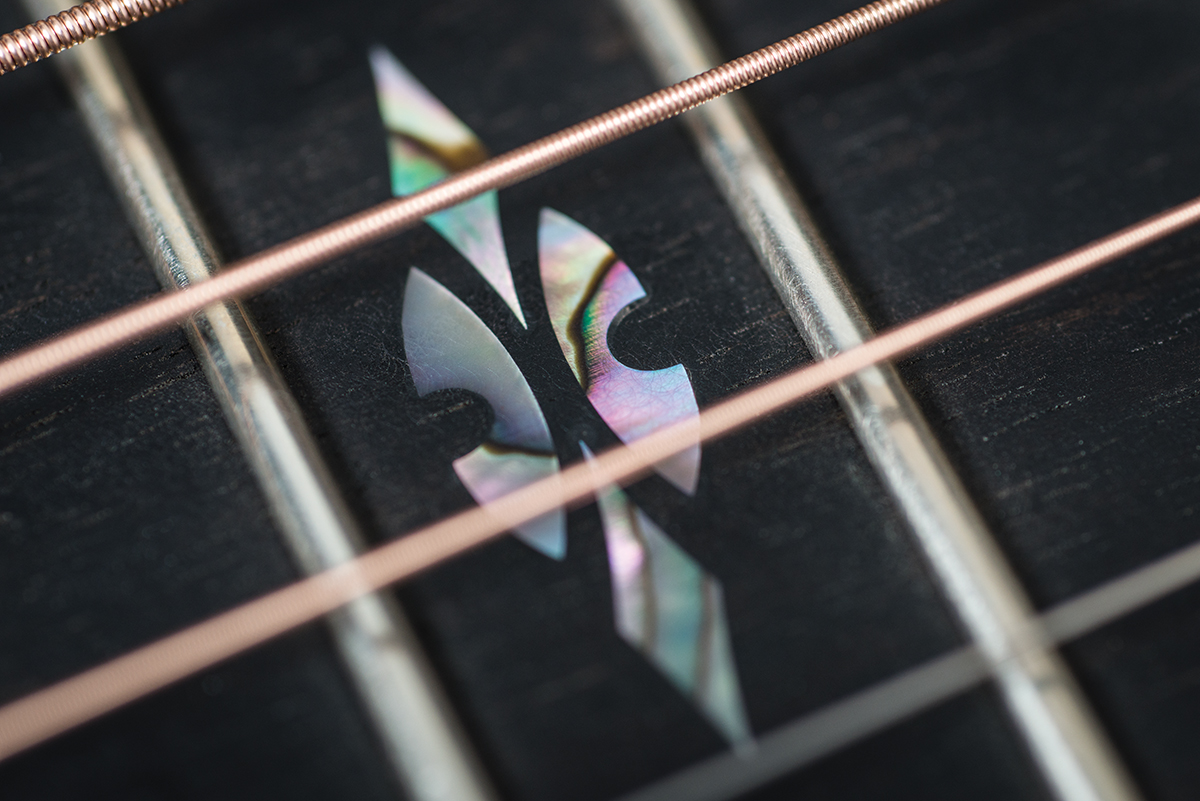 This is yet another in a line of recent Taylor models that has been turning preconceptions about the brand on their head. Many of the familiar features are there, including the pickguard, headstock and bridge shapes, but the overall vibe is completely different.

The 712e is precise without being clinical, inspiring rather than merely functional and it has a cuddly brown warmth that almost compels you to reach out to grab it for a quick strum every time it catches your eye. 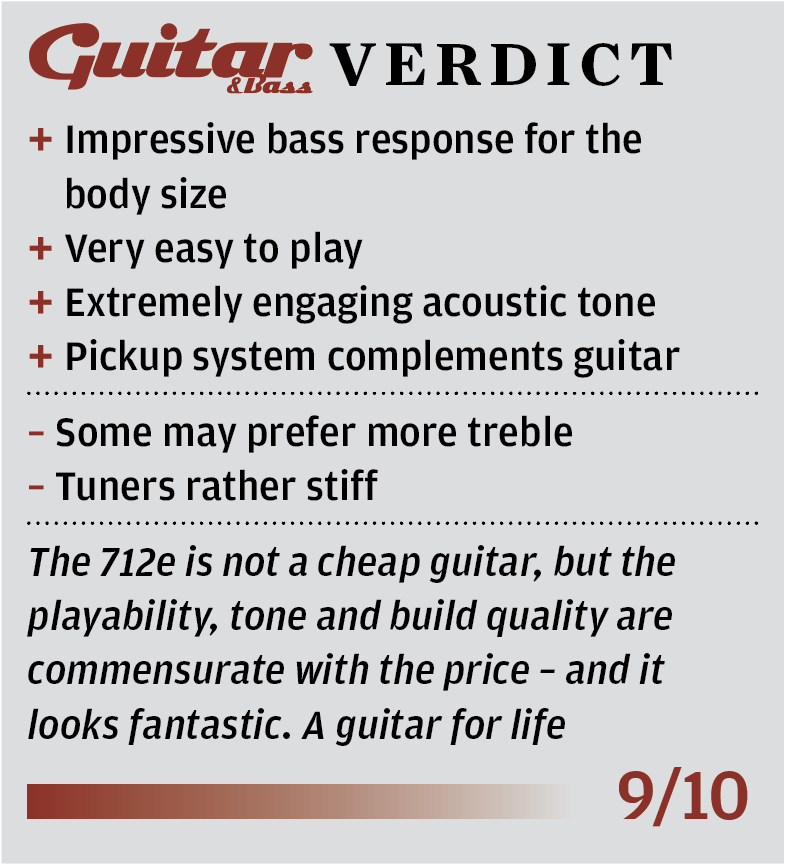