Incredible as it may seem, not so long ago Taylor Guitars was still a fairly obscure operation. As a kid, I would buy imported American guitar magazines, and I remember Taylor adverts in black and white featuring the company’s flagship 12-string model.

Out of curiosity, I dug one out of the archive, and you could contact Taylor via a PO box in Lemon Grove, California or phone and (presumably) ask to speak with Bob. Although Taylor went on to become the world’s biggest acoustic guitar brand, it’s surprising how some things remained unchanged. 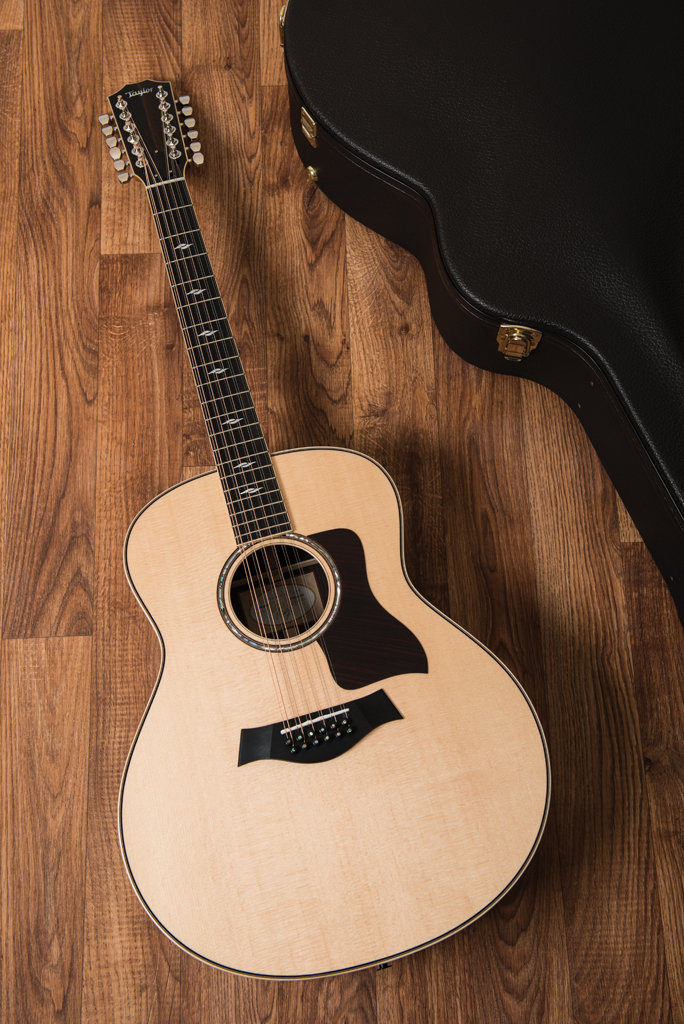 The headstock and pickguard shapes were fully formed by 1983 and, from what I can make out, Taylor was using abalone to inlay the rosette back then, but the fussy bridge is long gone. The Grand Orchestra shape of this 858e is smoother and less derivative than the hourglass curves of the 80s jumbo.

It’s hardly contentious to suggest Taylor guitars have divided opinion. Countless players have appreciated the build quality, easy playability and contemporary styling and tone. However, those with traditional tastes have sometimes found Taylors a bit clinical. There are even those who see Taylors as superb gigging tools, but choose to play different guitars at home and in the studio. 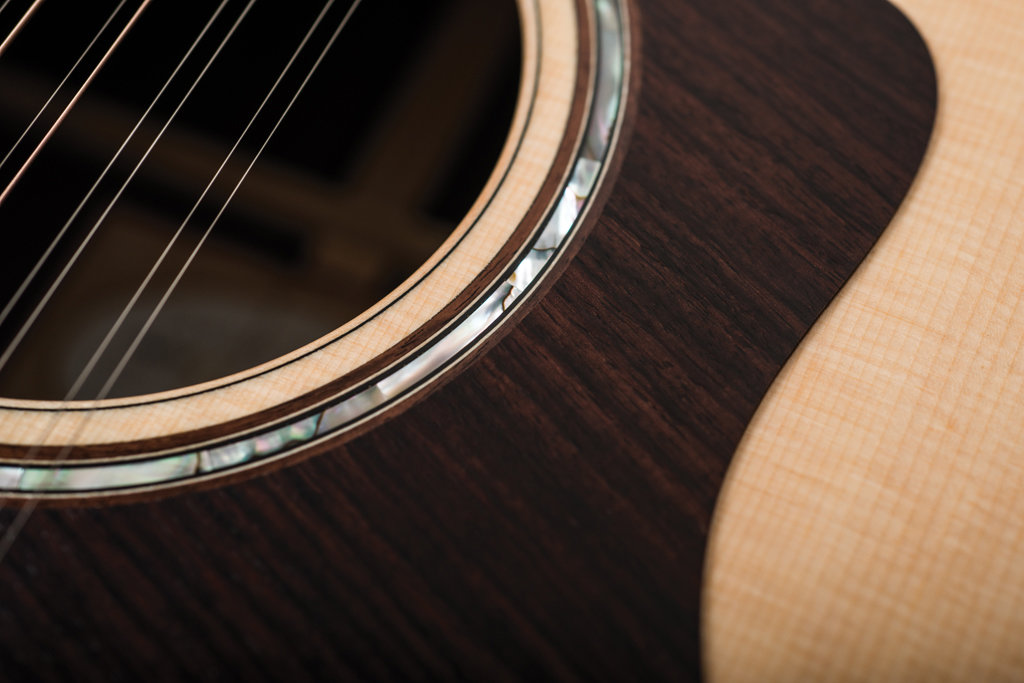 The appointment of master luthier Andy Powers a few years ago seemed to coincide with positive changes at Taylor. On certain models, wood binding replaced the sterile white plastic, nickel plating replaced the chrome and the finishes became softer and less stark.

There are undoubtedly too many other little things to list here, but the upshot is that Taylor guitars started to feel more `human’. The 858e is an example of these newer Taylors that sit there on a stand enticing you to pick it up and start playing.

The solid sitka spruce top is a fantastic-looking piece of tone timber with straight grain, an even colour and generous cross silking. The solid Indian rosewood back and sides have a deep chocolate hue, although the grain is more vivid on the sides than the back. The back itself sounds extremely lively, with a variety of clearly defined tap tones all across its surface.

Taylor was a trailblazer for bolt-on acoustic necks – something now commonplace in the industry. This allows bodies and necks to be finished separately, so in this case the body is gloss and the neck is satin. A Taylor I reviewed several years ago had a gap between the heel cap and binding that was filled by a gummy white paste, but I’m pleased to report this guitar’s neck joint is flawless and paste-free. 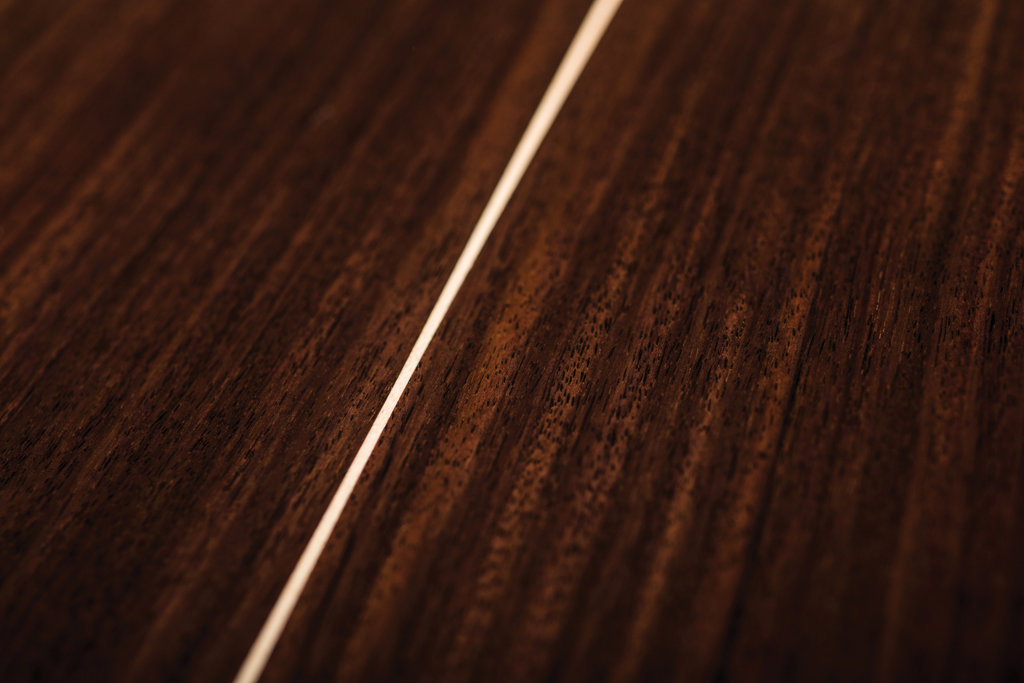 Bob Taylor’s concern for the sustainability of tonewoods is well known, and his company’s approach to neck construction may not please some purists, but it keeps down waste. We’re looking at tropical mahogany with a stacked heel and a scarf jointed headstock.

The headstock has a rosewood overlay and, like the body and ebony fretboard, maple binding. The nut and compensated saddle are Tusq, and behind the saddle are three circular inserts. They’re noticeable upon close inspection only because they’re jet black, but these are the piezo sensors for Taylor’s Expression II system. So why are the sensors behind the saddle rather than under it?

The idea that string vibration causes a soundboard to move backwards and forwards like a loudspeaker is more applicable to archtop than flat-top guitars. With flat tops, the bridge rocks back and forth along the line of the strings. 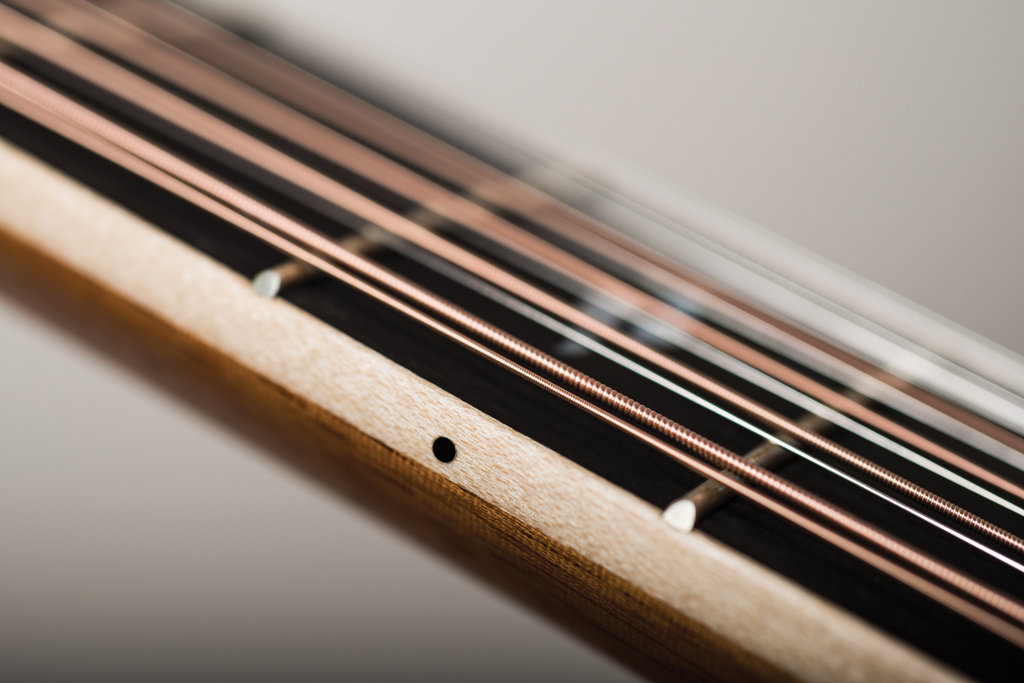 Taylor’s electronics designer David Hosler concluded the strings’ pressure on the saddle restricted movement, which is a cause of the thin and unnatural tone associated with undersaddle piezo transducers.

The piezo sensors can be calibrated individually by tiny allen head screws, and they combine with Taylor’s custom-designed onboard preamp. The controls are identical to the original Expression system, but the preamp’s gain structure has been altered to increase output and bring it more in line with pickup systems from other manufacturers. Battery access is external, with a hatch adjacent to the combination jack socket/strap button on the tail block.

The 858e has a slim neck with a wide fingerboard, helping to prevent the feel becoming too daunting, while the extra width aids the string spacing. Some 12-strings feel cramped and demand accuracy when you are picking out notes or playing fingerstyle, but after a short period of familiarisation I found it easy to be accurate on the 858e. 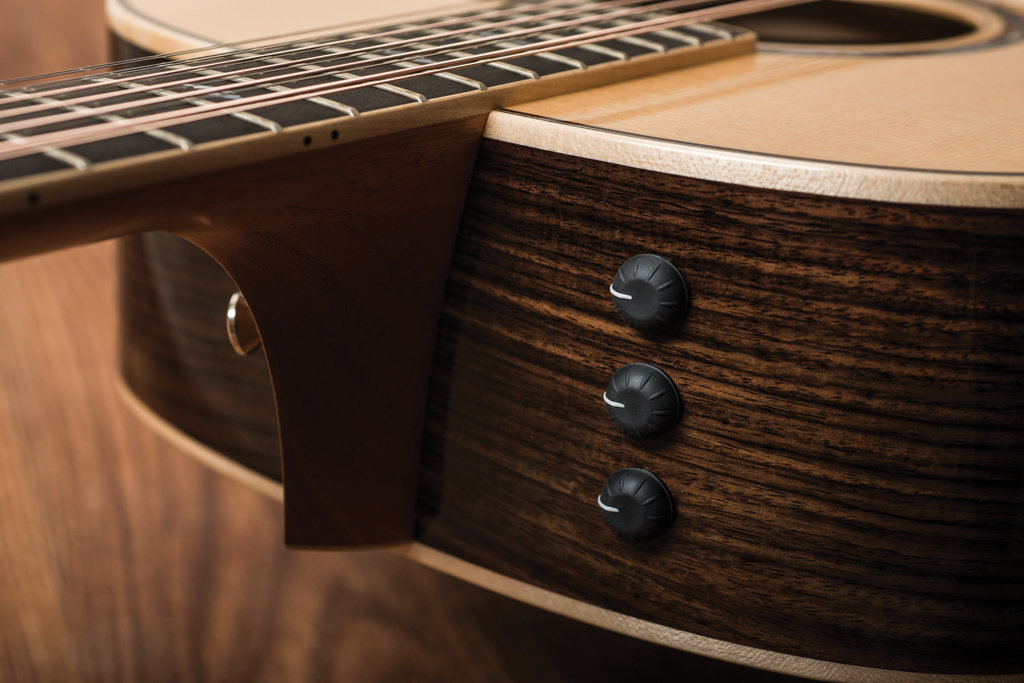 Equally, some-12 strings are over-built, but the 858e is responsive and dynamic, even with a light touch. Spruce and rosewood accentuate the highs and focus the lows, and the slight mid scoop is beautifully judged because it keeps the sound clear and boom-free.

When I need a 12-string sound in the studio, I generally use a Nashville-strung six-string, or I end up radically equalising and compressing the sound to get the airy chime without the track-filling clutter. The 858e produces almost an idealised 12-string sound without any electronic assistance, however solo performers who need an old-school bassy and muscular 12-string accompaniment may feel otherwise.

The bass is full without being dominant or overbearing, the high strings have a harpsichord-like quality and the sound is more about flow than thump. This guitar can certainly be big and loud, but it can do delicate and subtle equally well. The 858e is also the most in-tune 12-string I’ve played. Troublesome cowboy chords and Townshend powerchords with open and fretted strings all ring true and clear. 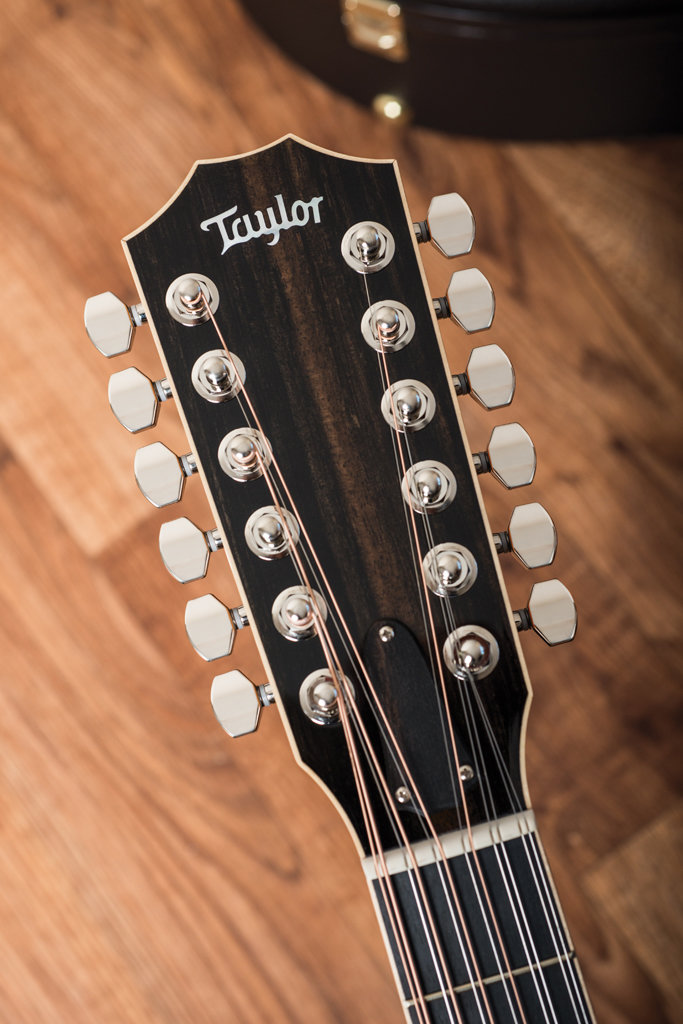 The Expression II produces a healthy output level and the tone is fuller and less squawky than a typical undersaddle piezo. More fully featured equalisation or a notch filter would make it even better, because the low end can feed back. The treble is sweet and fairly natural, but there are other after-market pickup systems with even better audio quality and there’s no built-in tuner or polarity switching.

Returning to that 80s advert, Taylor claimed its 12-string was “easier to play than most six-strings” and it played “in tune all the way up the neck”. In those days, being a 12-string player demanded strength and commitment, and Taylor earned a reputation for building the easiest-playing 12-strings. The 858e maintains the company tradition, and the current crop of Taylors is going from strength to strength. 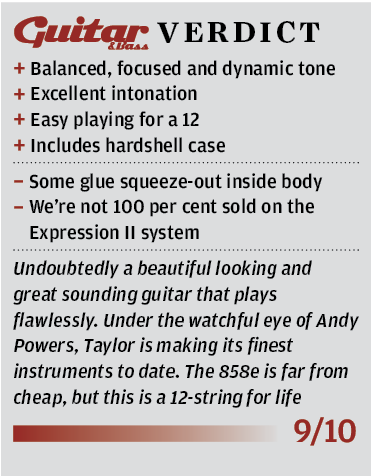