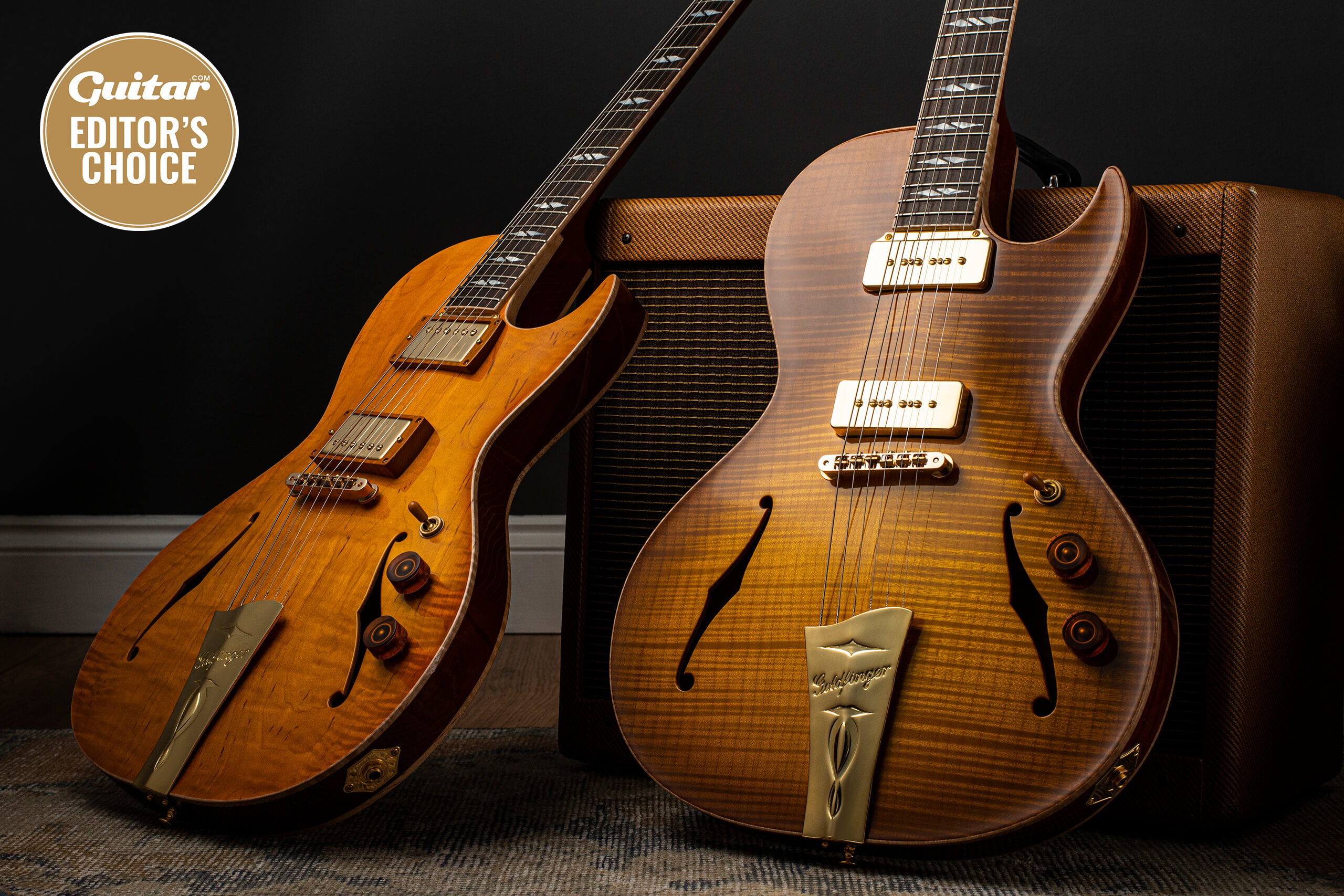 Does this boutique dream machine prove B&G has the Midas touch?

It’s been four years since we visited B&G’s headquarters in Tel Aviv, but even back then, a forthcoming model known as the Goldfinger was under development. With a larger body than its much-loved Little Sister and Step Sister stablemates, and a 16th fret neck join for easy upper-fret access, the Goldfinger is a flagship boutique design for players who refuse to compromise. Here we check out a pair of Goldfingers in P-90 and humbucker flavours.

Both guitars certainly have a discernibly golden quality, and it’s been achieved through the use of tinted transparent nitrocellulose lacquer. On the humbucker model it’s a rich amber yellow that imparts a deep glow to the carved maple top. On the P-90 model, it’s more like a faded vintage sunburst that never had any red mixed into the shading coats. 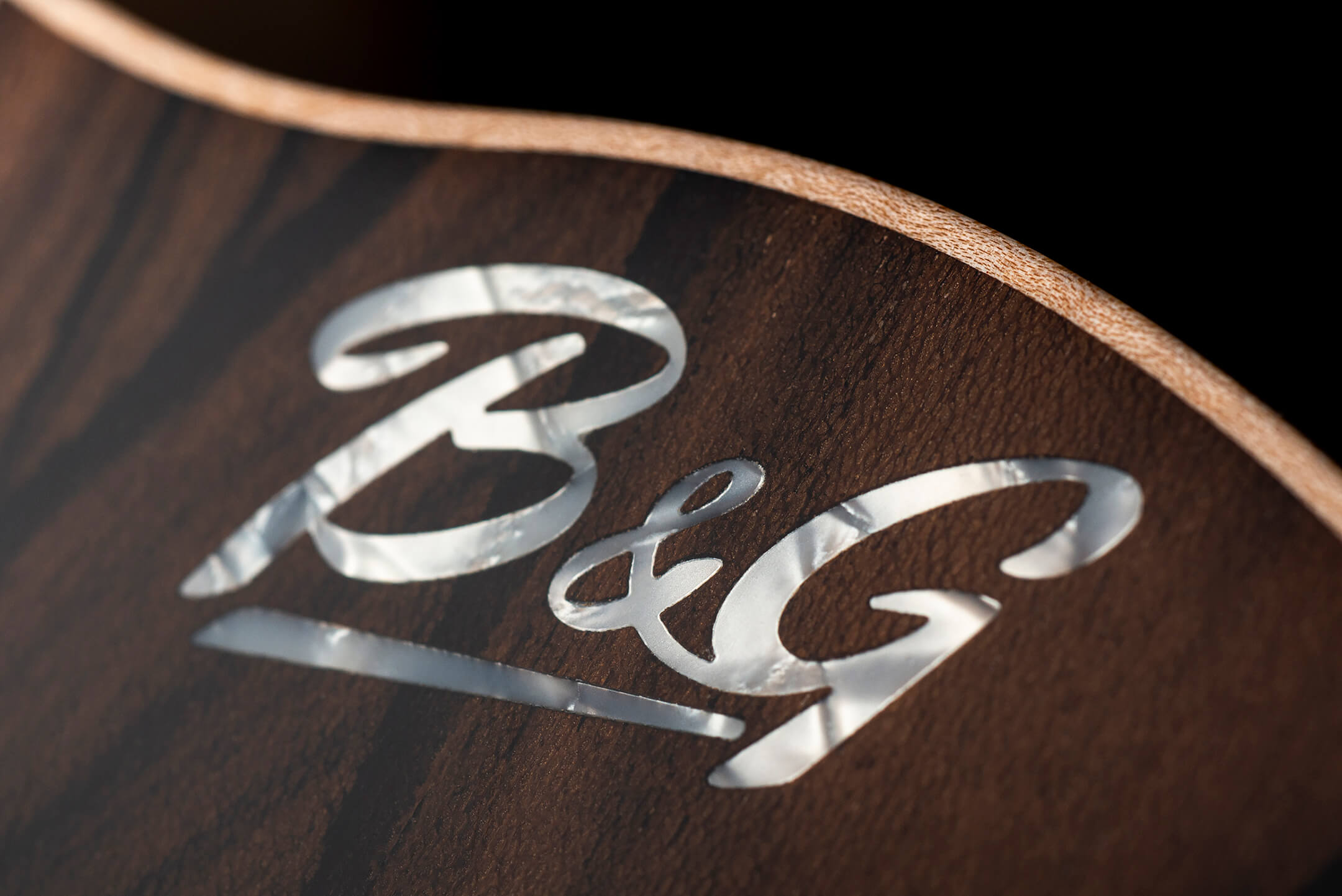 Instead, there’s a wonderfully smooth transition from the golden yellow centre into a mid-brown. It has an impressive glow and the maple’s figuring leaps right out. Flipping both guitars over, the solid maple backs have been given the same treatment and the timber is of no lesser quality.

B&G’s nitrocellulose finishes are always superb and, as usual, a faux binding effect is achieved by sanding away the tinted coats around the edges. The maple itself isn’t stained; because the colour tones come from the lacquer, it prevents the flame from becoming fixed. This creates a holographic effect, and very much like a vintage Les Paul Standard, the sumptuous maple figuring appears to move depending on the angle of the light.

Peeking inside the control cavity gives us a clearer idea about the way the Goldfinger models are constructed. You can tell from the outside that the maple sandwich has a mahogany filling, but rather than the bent plywood sides of a Gibson-style semi, B&G has designed the body around a central frame of solid mahogany that incorporates the sides and centre block.

Where the Little Sister’s mahogany back is blind routed, the voids in Goldfinger’s mahogany section are created by cutting all the way through the wood. The sides are about 10mm in thickness, while the inside surfaces of the maple top and back are carved to leave full-depth ‘platforms’ that are subsequently glued to the mahogany centre sections. It’s all very neatly done and, judging by the small amount of visible brown squeeze-out, B&G is using hide glue.

“Precise and comfortable, both guitars feel absolutely wonderful to play”

Under the hood, you’ll also notice Switchcraft switches, CTS potentiometers and a tone capacitor wired 1950s-style, from the output lug of the volume control. The capacitor is inserted into what appears to be a brass tube with B&G branding; it’s little details such as this that really impress.

B&G has never installed stop tailpieces, instead using bespoke cast units. The approach continues here with a specially designed tailpiece featuring the ‘Goldfinger’ legend in a script font and visual flourishes that echo the pearl inlays on the ziricote fretboard and elegant headstock.

“Tonally it sits between a really good ES-335 and a Les Paul, with an extra degree of clarity and definition” 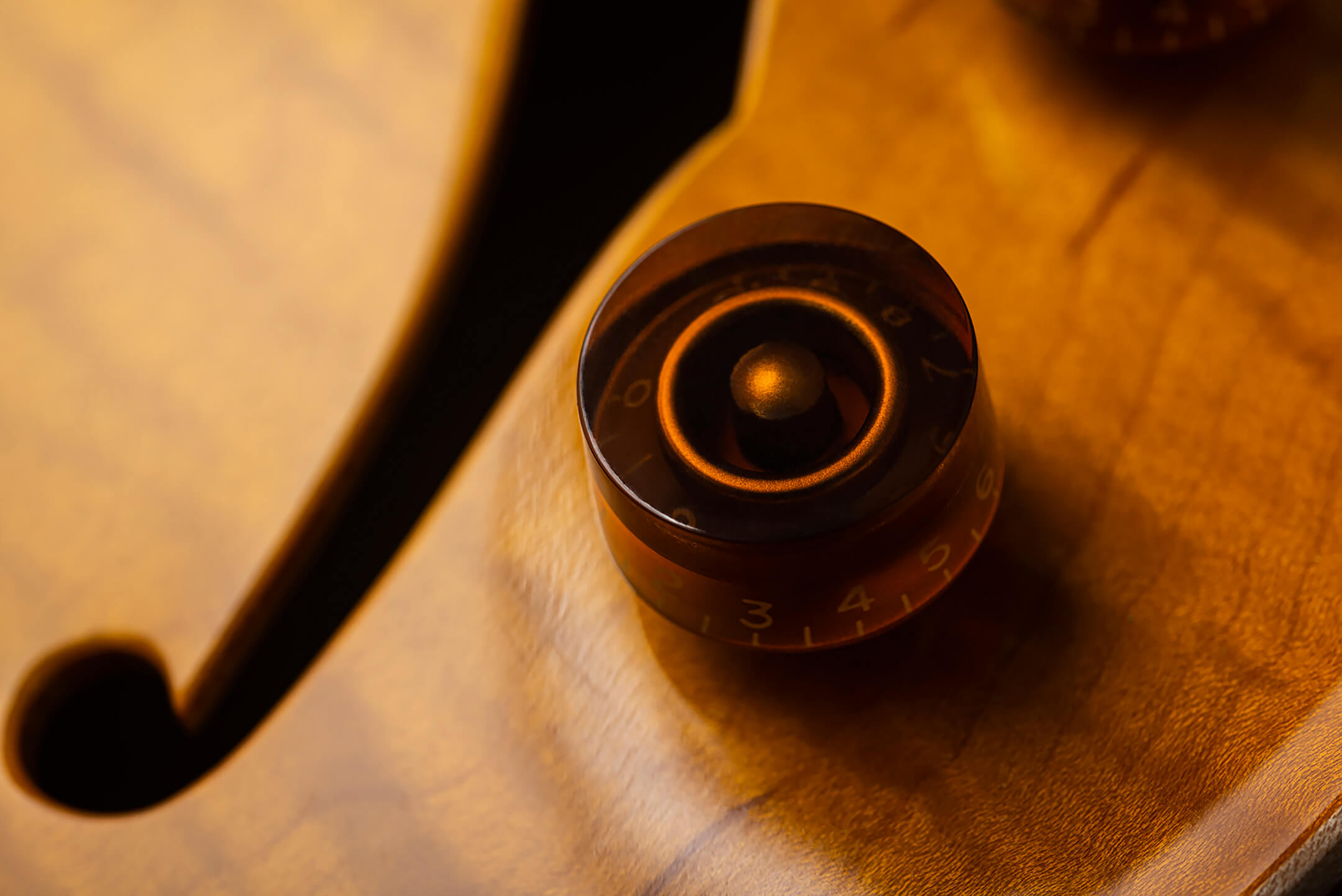 The headstock is solid like the Step Sister rather than slotted like the Little Sister, and features maple binding to match the fretboard’s. There’s a ziricote veneer on the front and gold-plated open gear Gotoh tuners with B&G Private Build branding. The tune-o-matic bridge and pickup covers are gold plated too, along with the SG-style spacer at the end of the neck that conceals the truss-rod adjuster wheel.

The only significant differences between these two Goldfingers are the pickups and the level of figuring on their maple tops and backs, with the P-90 model here having a much more pronounced flame. B&G pickups are made in-house and unpotted in the vintage style. The humbucker rings are made in-house too, from maple that’s stained to match the top. 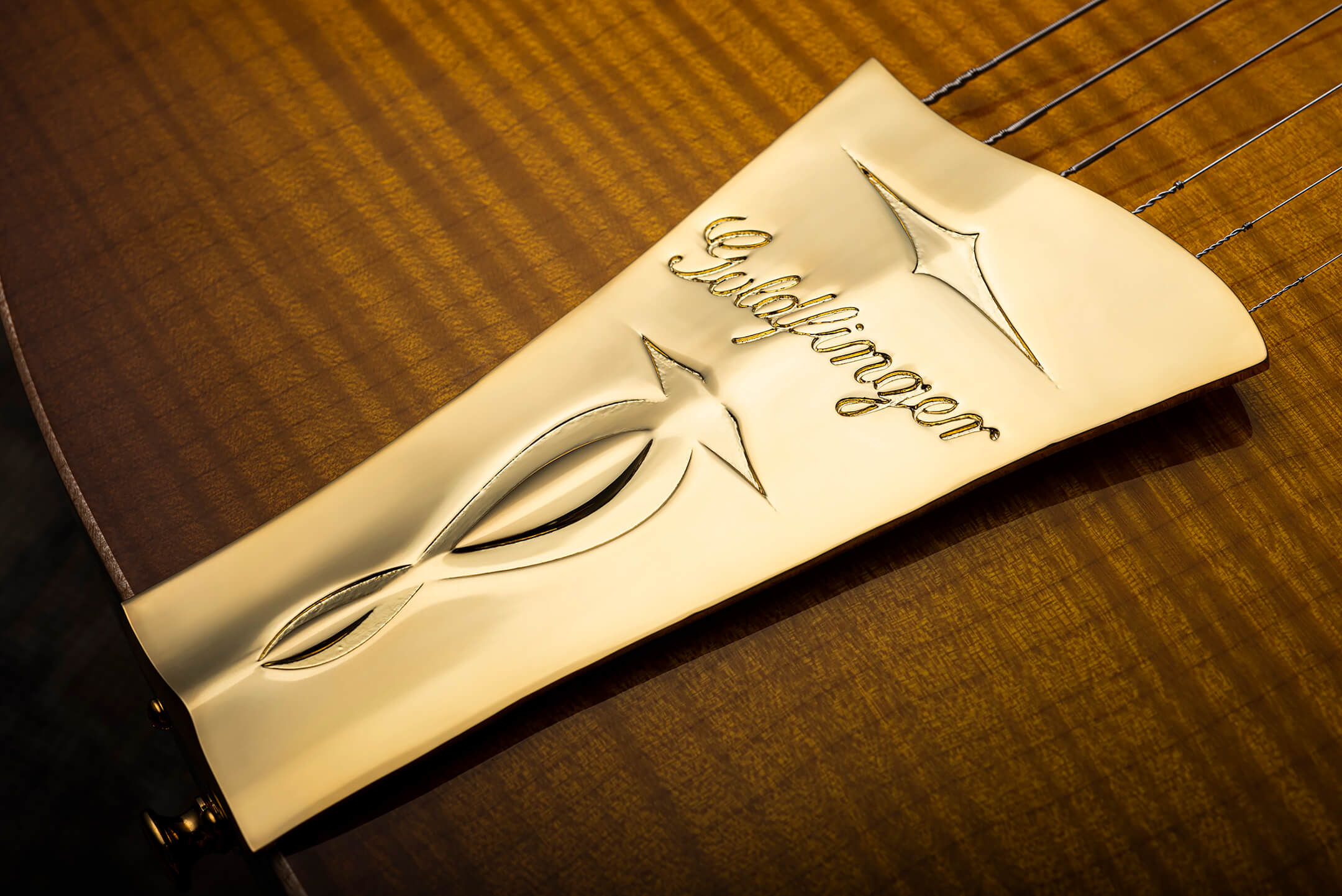 The Goldfinger is a long guitar – about 50mm longer than a Les Paul from headstock to tail – but the balance is excellent and everything falls right into place. When compared to the Little Sister, it seems B&G has opted to increase the size of the hollow areas within the body by adding length rather than width. As a result, the Little Sister’s visual vibe is retained, while providing the easier upper-fret access and two additional frets of the Step Sister.

Compared to the last batch of Little Sister models we encountered, we find that B&G’s neck carve has changed, quite subtly, for the better. The profile has acquired a slightly more precise and comfortable feel, and though it was very good to begin with, the soft V is now a little more pronounced. Both review guitars feel absolutely wonderful.

Despite identical construction and hardware, these instruments sound slightly different unplugged. Whether that’s attributable to variations in natural materials or the fact that the P-90s sit inside the body and the humbuckers are mounted to the top, it’s hard to say. Either way, the P-90 version has a louder and brighter chime while the humbucker model is smoother, warmer and more compressed. But the differences are small, neither is ‘better’ as such, and both guitars have ample vibrancy, depth and sustain.

We plug into our Princeton-style Rift PR18 and just about manage to resist the strong urge to launch into a Bond theme. The P-90s are microphonic and extremely sensitive, and combine chiming twang with a full midrange growl. They’re far closer to the P-90s of the late 1950s than those from earlier in that decade, and capture the acoustic qualities of the guitar rather well when played clean.

“This is contemporary guitar building at its finest”

Switching over to our humbucker-loaded Goldfinger, the pickup screws have been set for optimum string balance and it really pays off. This is a superior set of PAF-style pickups that sound bright yet warm, powerful and clear. They also have just the right amount of microphony. Tonally we hear something between a really good ES-335 and a Les Paul, with an extra degree of clarity and definition.

“The P-90 version has a louder and brighter chime, while the humbucker model is smoother, warmer and more compressed”

Both guitars sustain impressively, and they are surprisingly feedback resistant. We also hear three distinct tones across each of the three pickup settings and the middle positions of both guitars are a real highlight. Our only reservation is the beautifully carved but pointed heel, because it may be at odds with a guitar designed for upper-fret access. But in all other regards, this is contemporary guitar building at its finest.