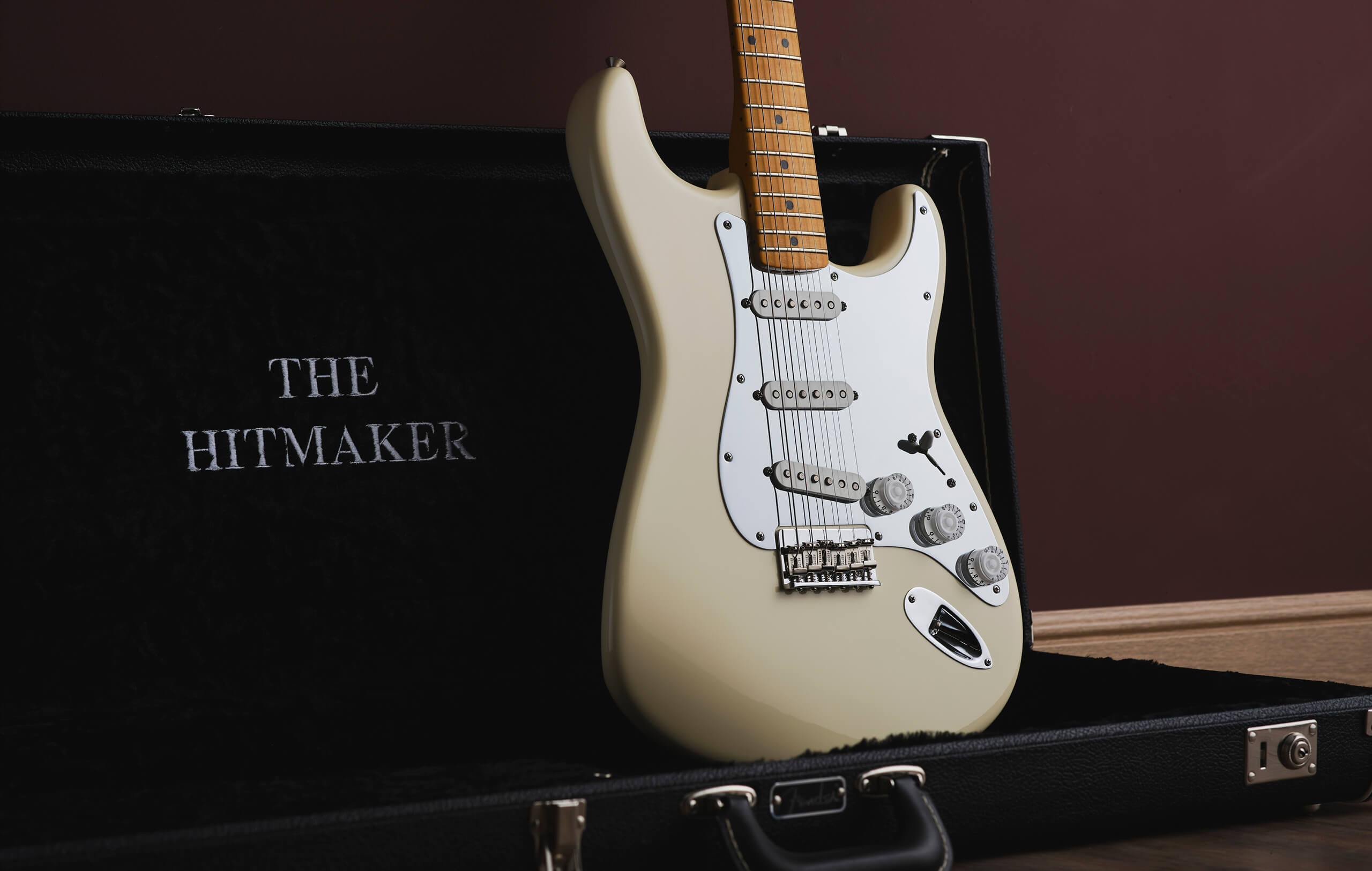 The Big Review: Fender Nile Rodgers Hitmaker Stratocaster – Are we freaking out over this chic Strat?

Fender releases a new signature model for one of the most prolific guitarists in pop history… and it’s more than just a funk strumming machine.

To us cynical musicians, signature guitars can seem like the ultimate act of self-indulgence – an expensive way to dress up something ordinary and sell it for big bucks. But often you’ll get a unique feature set on these instruments, with little touches you won’t find anywhere else. With the Fender Nile Rodgers Hitmaker Stratocaster, you’re getting arguably the most omnipresent guitar sound in modern music.

Nile Rodgers isn’t the flashiest guitar player you’ll come across – no finger-busting two-tone bends here, nor much in the way of three-note-per-string legato runs. But Rodgers’ sound is so pervasive it’s pushed beyond anything that even the most technical of guitar heroes can muster. 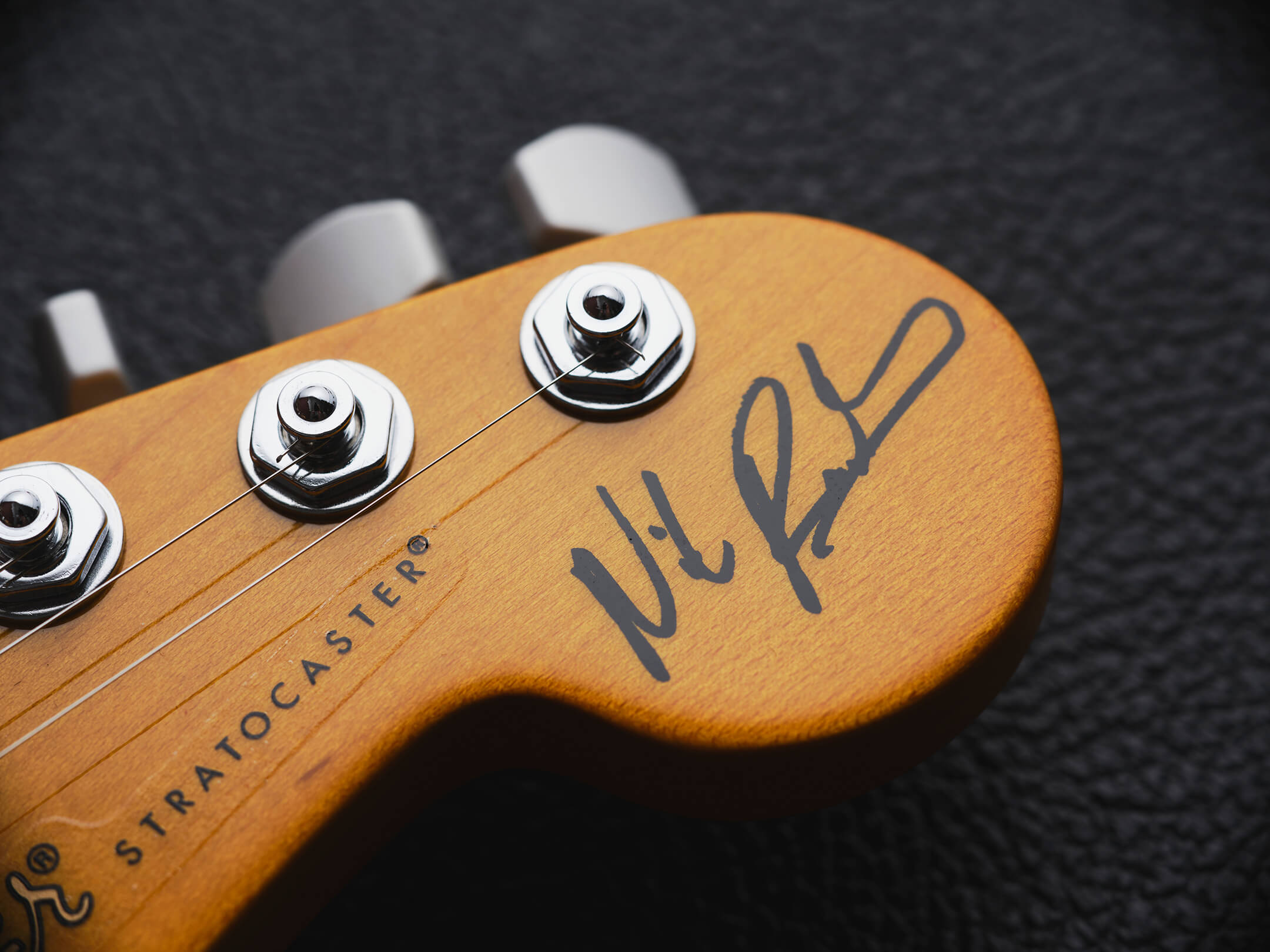 According to the man himself, they call it the ‘two-billion-dollar guitar’ – and that’s because it’s appeared on records by everyone from Rodgers’ original band Chic to David Bowie, all the way through to Daft Punk and Avicii. You’d be hard pushed to find anyone on the planet who hasn’t heard its tone somewhere.

And it’s not just about disco. Many famous hip-hop records used that signature sound through sampling, including the Sugarhill Gang’s hugely influential Rapper’s Delight. In fact, Nile Rodgers’ guitar is routinely credited as being a driving force in the sound of hip-hop. 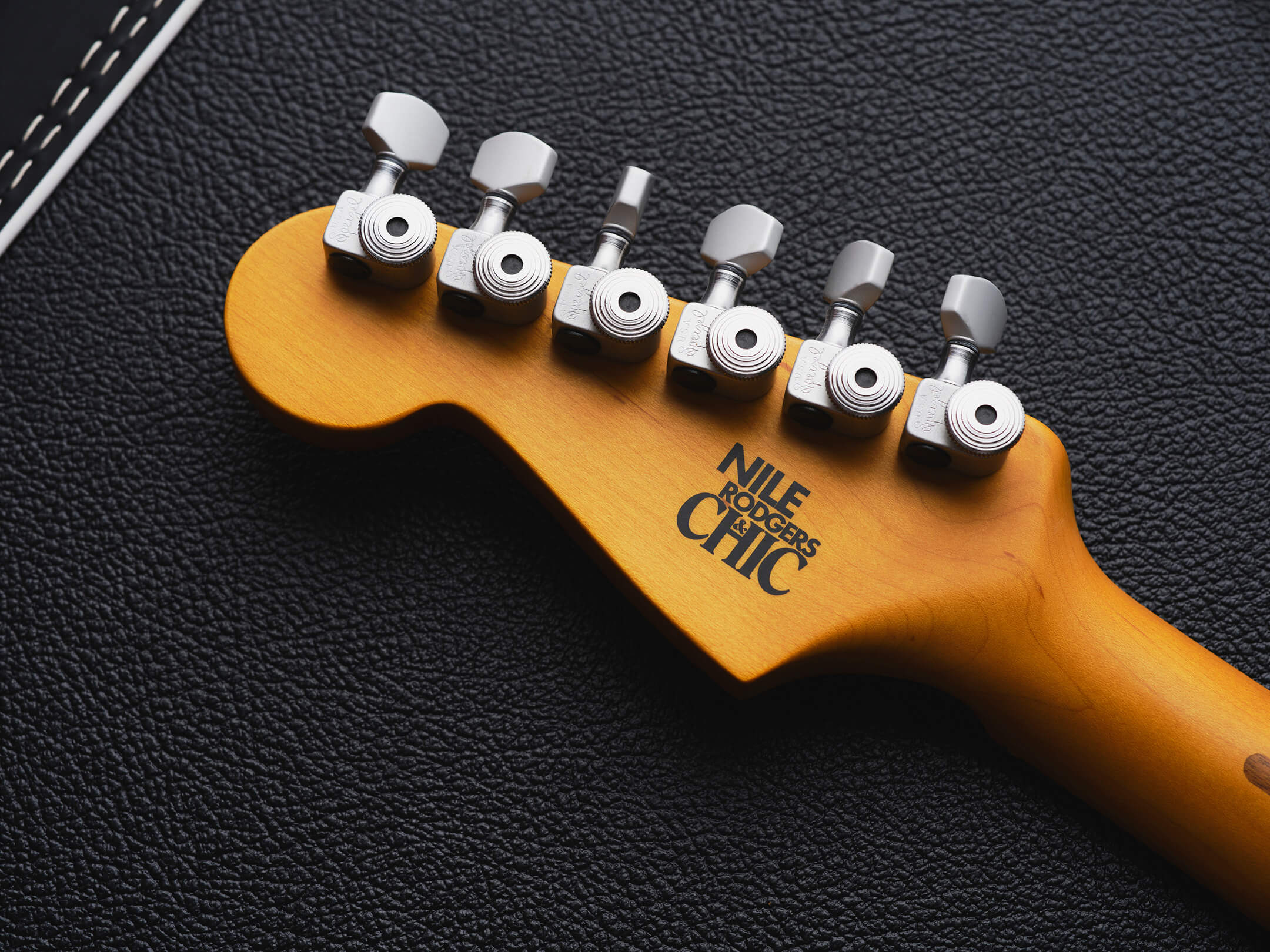 The story of the Hitmaker starts in 1973, when Rodgers picked up a Strat on a trade-in at a music store in Miami Beach. Being a huge fan of Hendrix, he stripped it down and repainted it in the famous Olympic White of the guitar his own hero played at Woodstock. A chrome-plated brass scratchplate was added for extra pizzazz, allowing Nile to deflect the stage lighting back into the audience. Finally, he switched the regular knurled controls for speed knobs, allowing for easier volume swells.

Just like its antecedent, the new Fender Nile Rodgers Hitmaker Stratocaster is something of a mongrel, featuring the slightly smaller alder body of a 1960s Strat but the neck of a ’59. There’s a lot of forum talk about what exactly defines a 1959 neck profile, but we’ll get to that a little later. A hardtail bridge takes the place of the typical vibrato, making its own contribution to the timbre of this instrument. 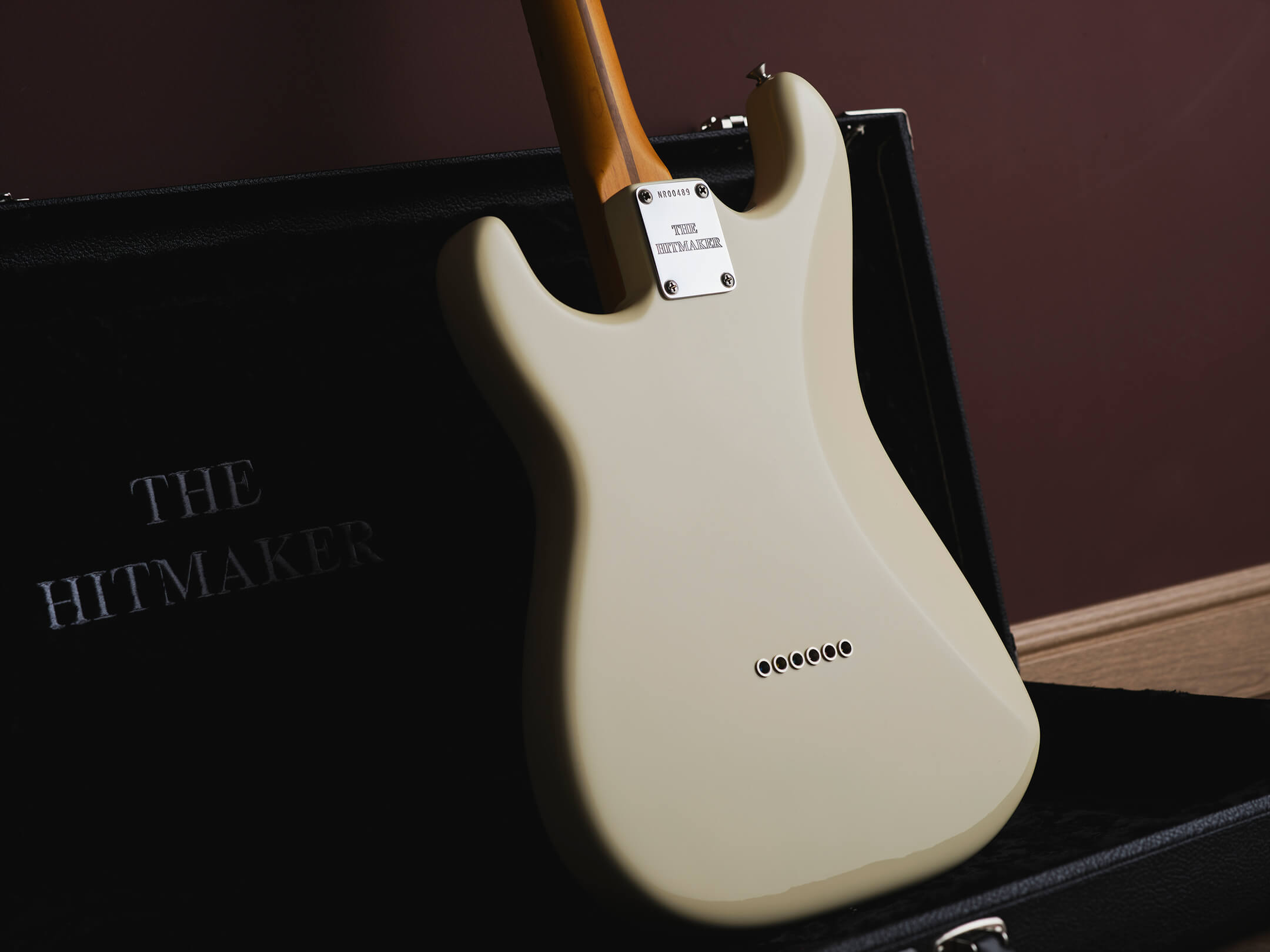 The pickups have been voiced after the 60s units that came as stock in the original guitar. Adorning the headstock alongside the familiar logo of the big F is Nile’s own signature, with a set of Sperzel locking tuners and the Chic logo on the reverse. The look is completed by a stamped neck plate that reads ‘The Hitmaker’. 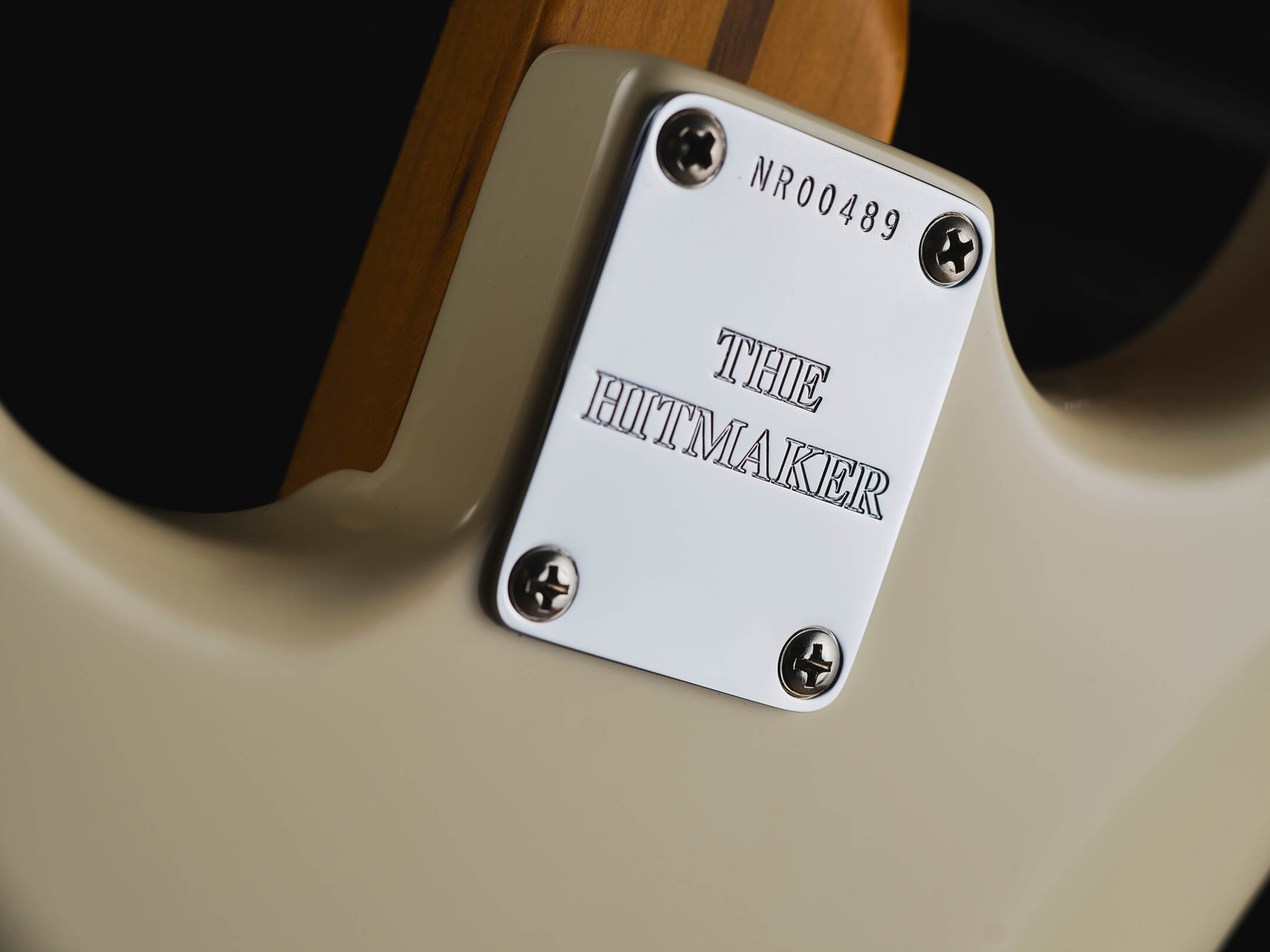 Unlike the old Custom Shop version of Rodgers’ instantly recognisable guitar, this one hasn’t been relic’d, looking sharp-dressed and shiny from the moment you open the hard case. Embroidered into the black velour of the case’s interior are those same iconic words, ‘The Hitmaker’, just to remind you of that slightly intimidating pedigree.

The mirrored scratchplate really stands out from the off… but if you’re looking to keep this guitar looking brand new you’re in for an uphill battle. After no less than a couple of minutes of percussive funk guitar lines, ours was covered in fingerprints and smudges from our rapid-fire string muting and upstroke chord stabs. If you’re the kind of player who likes their guitars pristine, be prepared to wipe this one down every time you pick it up. 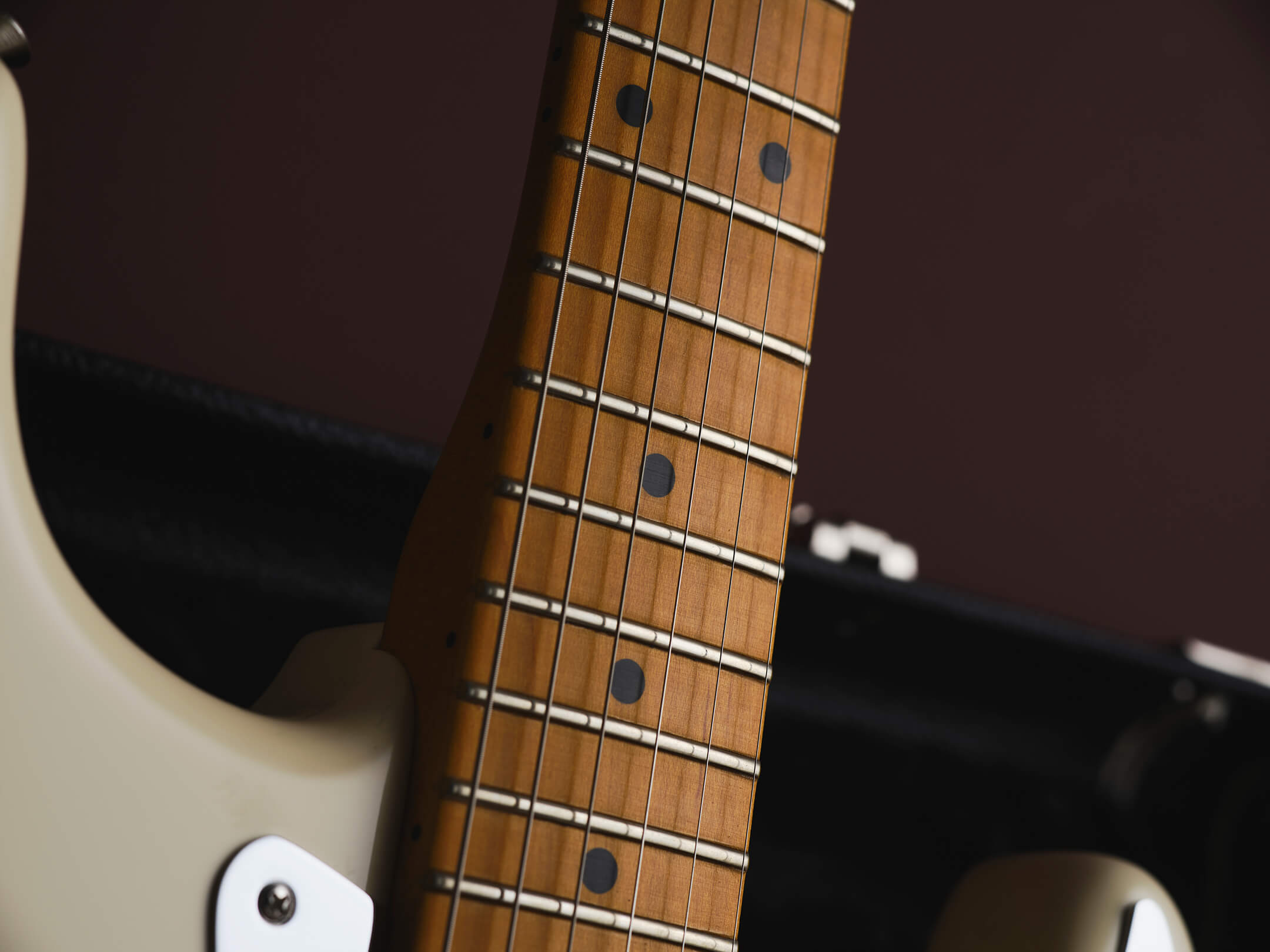 The slightly slimmer Strat body is difficult to judge from sight alone, but you can feel it in the weight: it’s distinctly less hefty than most S-types.

The satin nitrocellulose neck is very sticky out of the case but it doesn’t take too long to break it in a bit, although some may want to speed up the process with a little sanding to really nail those quick chord changes. The ’59 neck profile certainly feels slinkier than the modern C on our other Fenders, but not so much that it’ll force you to adjust your playing style as some vintage necks do. We’re talking about millimetric differences. 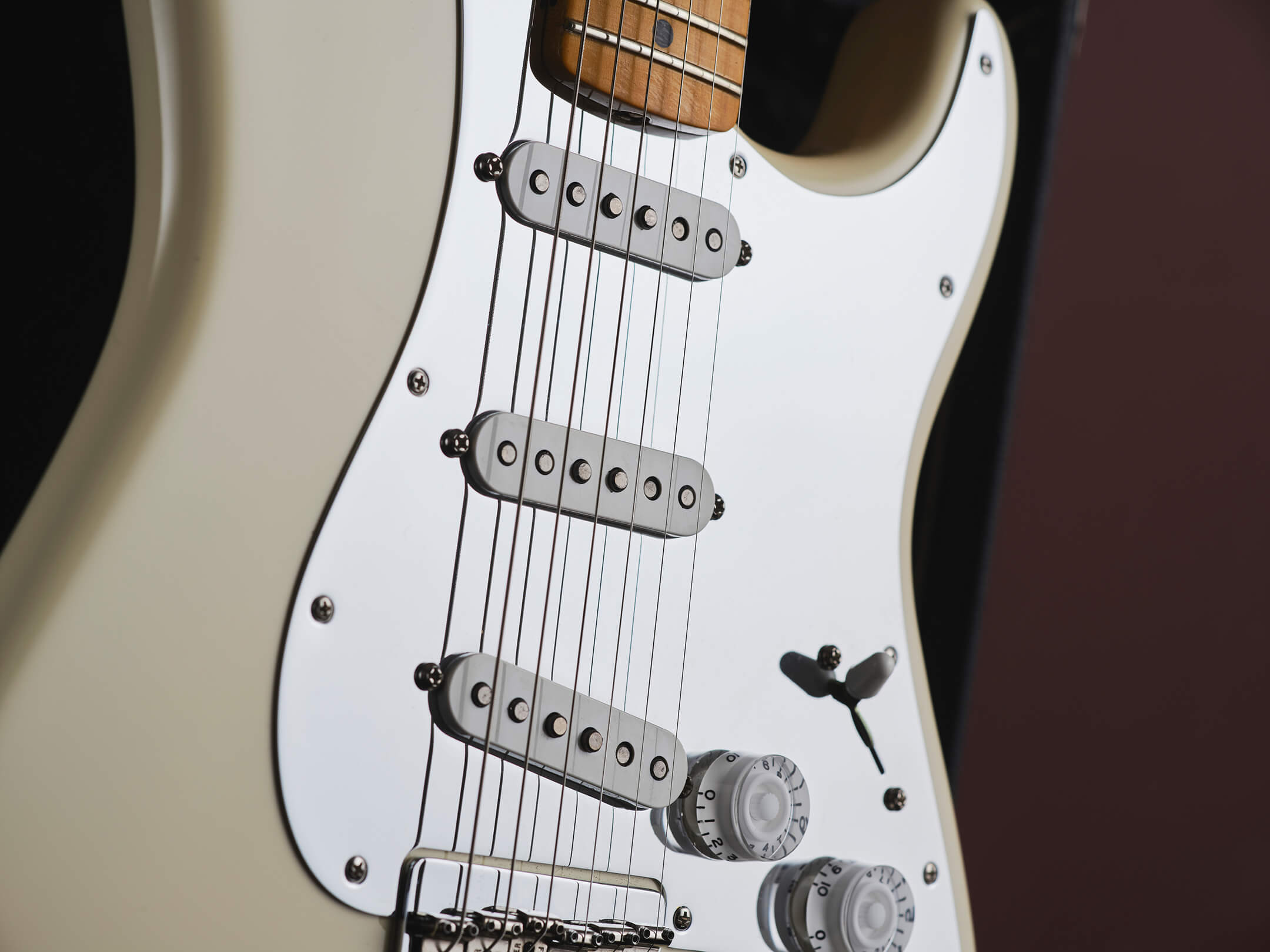 Plugging into a small tube combo, we start off in the neck position – just as the man himself does almost exclusively. It’s that glorious Strat neck sound we all know and love, smooth and creamy without a hint of any mud. If these pickups are as accurate as Fender says they are, then it’s no surprise that Nile spends most of his time in the neck position with its warm yet articulate tone.

Quickly flicking through the other settings we find the usual quack in positions two and four, with solid if unspectacular sounds from the middle and bridge pickups – though we do need to roll back the treble significantly on the bridge unit, such is the brightness of its voicing. They’re all sweet and usable tones… but we keep coming back to that glorious neck pup. 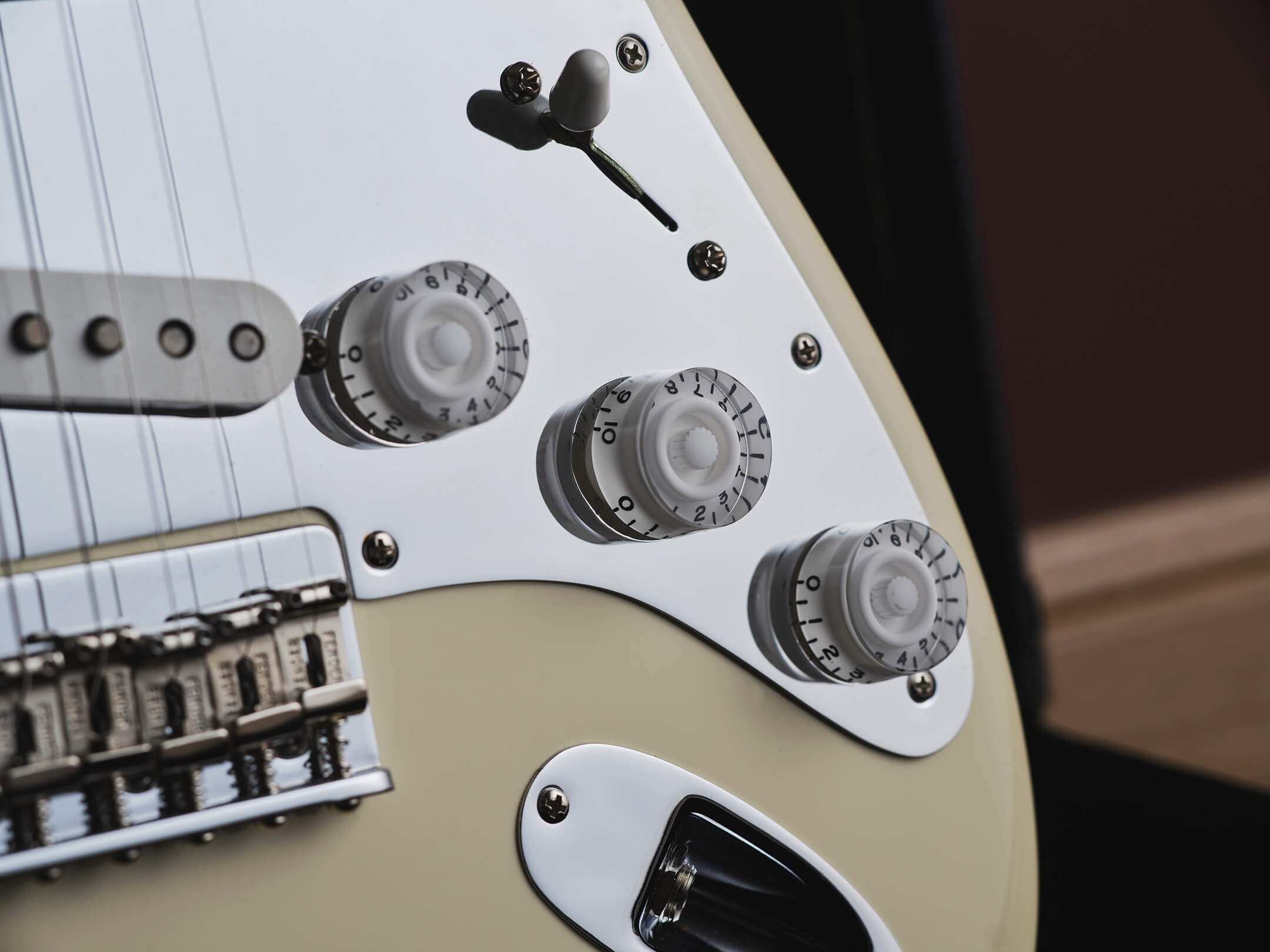 As you might expect on a simple clean channel, these pickups excel at the staccato strums of the classic funk style, but now we want to find out if this guitar is more than a one-trick pony. And it doesn’t take long to answer that question: with an atmospheric reverb pedal in the signal chain, things quickly get very post-rock. These sweetly voiced pickups make slow-picked arpeggios sound boundless.

Cranking the amp’s gain or adding a drive pedal, meanwhile, livens up those other four positions significantly. The sweet Strat-y chime is still present, but this guitar can really roar when driven hard. Suddenly it feels as though anything is within our grasp, from gritty blues soloing right the way through to hard rock. Even some dabbling in noise-rock tritone chords offers up a delicious sonorousness, inviting plenty of sonic exploration.

As you might expect from a premium-level Fender Strat, the Nile Rodgers Hitmaker looks impeccable and plays beautifully. But the tonal versatility of this guitar means it can do much more than you might think, proving just as adaptable as its architect.