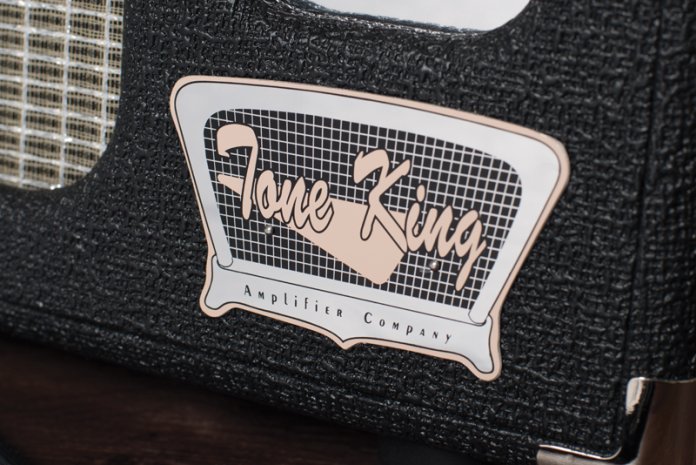 I can’t help but admire amps that look like vintage TVs or hi-fi consoles. The Falcon Grande is a prime example, and it’s an appropriate match for the Supro-style circuitry here. Tone King describes this as an ultra-linear output stage with cathode biased 5881 power valves and no negative feedback. It’s designed to be sweeter, smoother and more rounded in a late-40s or 50s way. Tweakers can also try 6L6s with no need for adjustments.

It’s not all retro, though, because the Falcon Grande features very high-grade PCB construction, an integral acoustic lens to eliminate treble beaming and a built-in Ironman attenuator. This reactive device costs around £350 in standalone guise and relies on a set of custom transformers and automatic EQ adjustment to compensate for tonal changes at various volume levels. 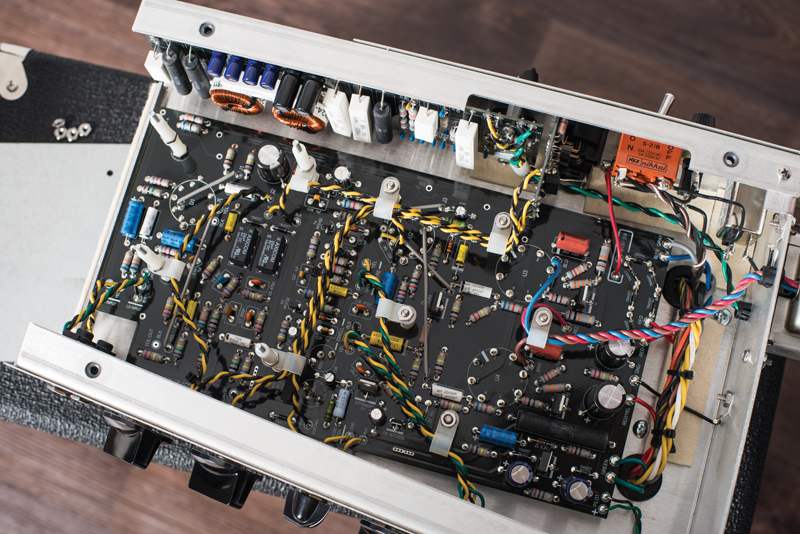 With volume, tone, a three-way mode switch and two controls for the onboard spring reverb, there’s more going on than first appearances might suggest. Even the two inputs provide slightly different voicings, and the amp ships with a four-button footswitch.

Most of us are used to tweaking effects pedals with our toes while playing, but this is the first amp I’ve seen that allows you to do the same. Those big knobs may appear to be a retro affectation, but the design makes practical sense – as long as the amp’s on the floor. 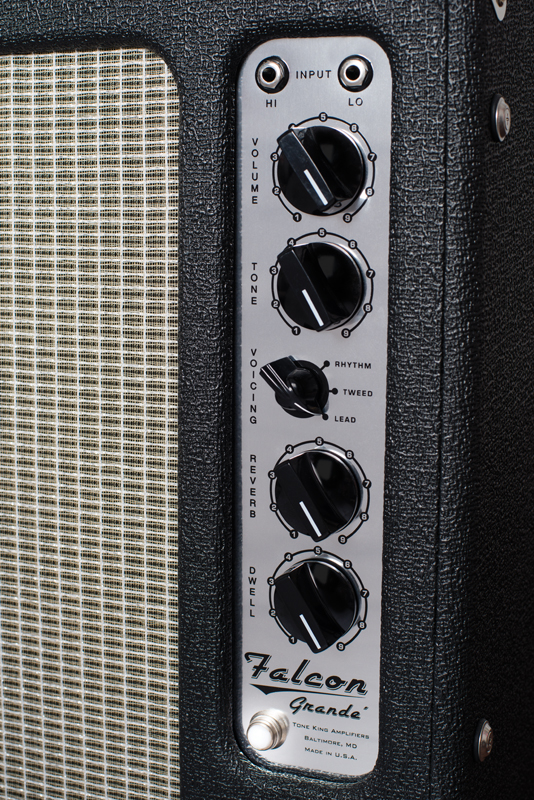 With only volume and tone controls, the Falcon Grande is an extremely versatile and tweakable amp. As a player who uses tweed amps a lot, I went straight for the tweed preset and felt immediately at home.

On amps such as the tweed Deluxe, turning up the tone control makes the amp sound brighter and more overdriven. With this Tone King, you can explore the full gain range using the volume control alone, and the tone control can be set exactly where you want it. But even at maximum with the bridge pickup of a maple-neck Strat, the Falcon Grande never gets edgy. 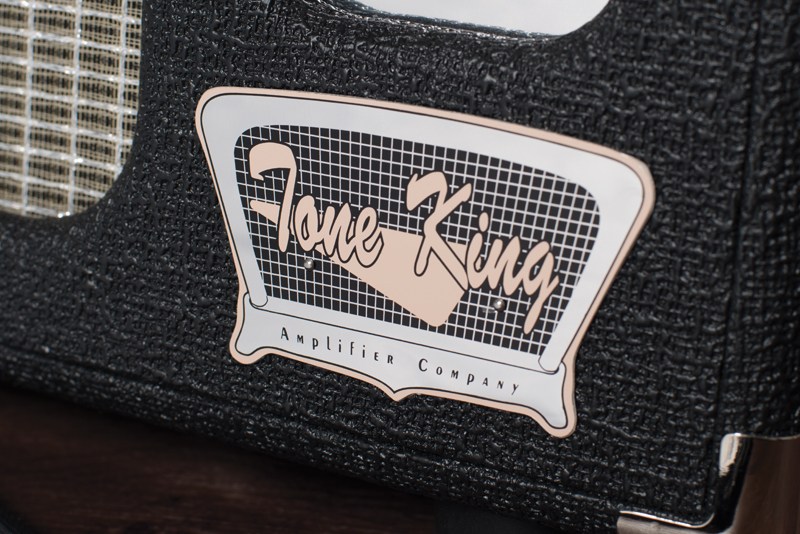 Roll the tone fully back and crank the volume and you get into some seriously old-school, boxy blues overdrive tones. There’s enough upper-harmonic activity to retain clarity, but this amp honks in a snarly sort of way that’s perfect for playing contemporary garage-style blues and roots.

So much for the extremes. With moderate volume and fairly high tone control settings, the Falcon Grande has the pure, silky and shimmering treble of a medium-power, late-50s tweed. Very minor adjustments to the controls can make a big difference to the degree of compression and overdrive you can find with your fingertips.

Pushing the tweed mode harder moves you though Eagles and yacht rock sustain into a ferocious overdrive that you can moderate by playing lightly or rolling back your volume. So, in essence, this mode gives you a taste of medium-sized tweed tone with extended frequency range and none of the limitations or compromises inherent in 5E3-type circuits.

By this point, I was so taken with the Falcon Grande’s versatility, I was wondering why Tone King felt the need for two other modes. Switching over to the rhythm mode provided answers very quickly. In addition to dropping some gain, the midrange becomes less full and up-front, while the bass end tightens up considerably. 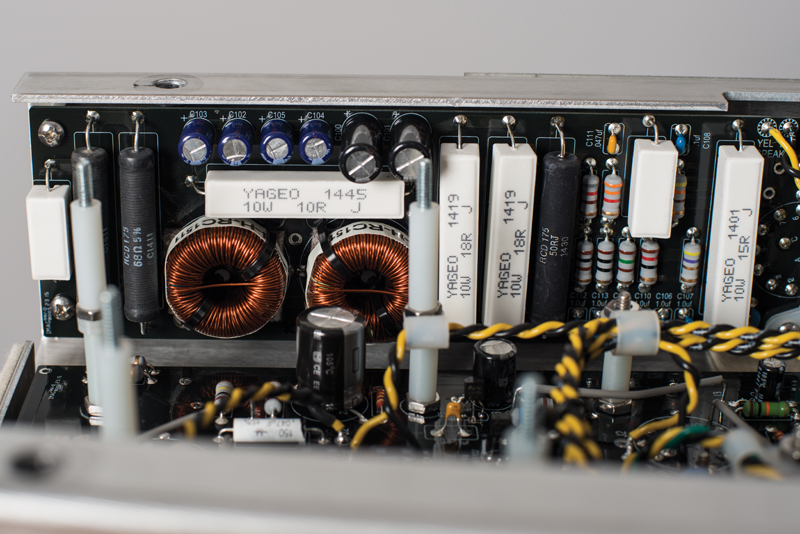 The treble remains devoid of glassy shrillness, but there is a sense of it opening out. This is where you’ll find your funk, country and jazz tones – staying clean up to halfway, before easing into overdrive. If tweed is 50s mode, then rhythm is the 60s, but both have a softer quality with less attack and punch than mid-power Fender circuits of those eras.

I had expected the lead mode to be simply a hotter version of the tweed setting, but it has a personality of its own. Yes, it’s hotter, but it’s also crisper in the treble and very much tighter in the lows. There’s even a hint of cocked wah to the midrange that works wonders with a Les Paul.

Tweed mode is inescapably retro in flavour, but lead mode has a more contemporary edge at equivalent tone settings. It’s hardly alt. rock or metal, but there’s a menacing bite that enhances pick attack and helps to retain definition through the pumped-up mids. 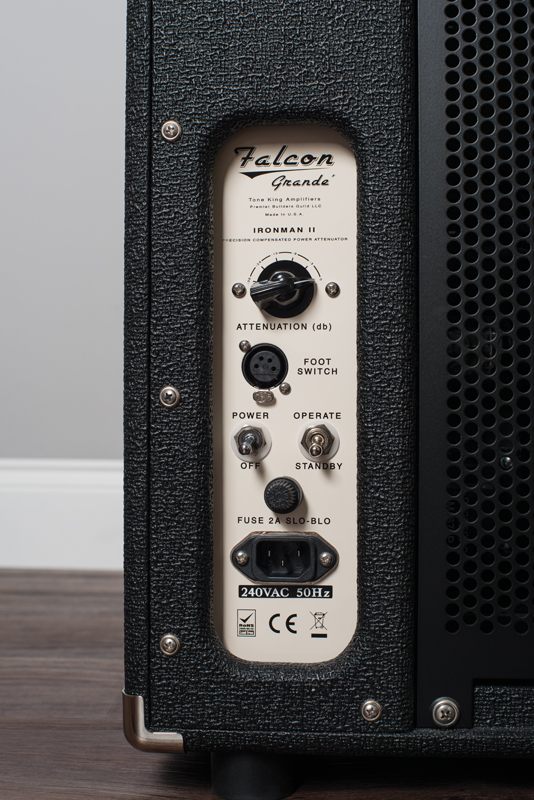 If you roll back the tone, lead mode assumes a more vintage and lo-fi quality that works really well for dirty riffing and bottleneck. Flat-out, you can hear the speaker getting involved as it begins to add a hint of extra compression, but it’s a world away from the papery rasp of some driven speakers.

My feelings about the reverb are mixed. I had hoped that the dwell control would range from a short bathroom-style decay to something more enveloping. Instead, the decay time doesn’t change, but the reverb tone gets brighter and more prominent.

Some may feel that the Falcon Grande’s tonal subtlety and harmonic bloom are obscured somewhat by the lushness of the reverb – especially with overdriven tones. To my ears, it works best with rhythm mode – and if cavernous spring reverb effects are your thing, you’ll certainly have no cause for complaint. 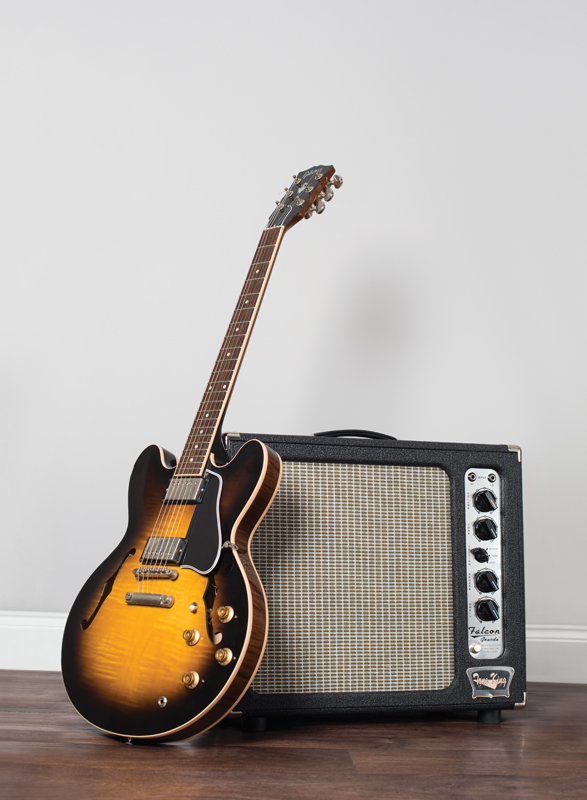 Personally, I’d prefer to have the attenuator foot-switchable rather than the reverb to bump any one of these modes up for soloing without adding overdrive or altering the tone. Tone King’s Ironman attenuator has justifiably earned plaudits, and having it integral to the amp adds considerable value. Being able to use it as a pseudo boost might add even more.

Considering that the three modes share the same volume and tone controls, it’s remarkable how compatible they all are. Although tweed and lead are both louder than rhythm, there’s not that much level difference between them, yet each sounds distinct and performs a specific range of functions. This can work only when expert electronic engineering combines with a core amp tone that’s pretty special. The Falcon Grande has both in spades. 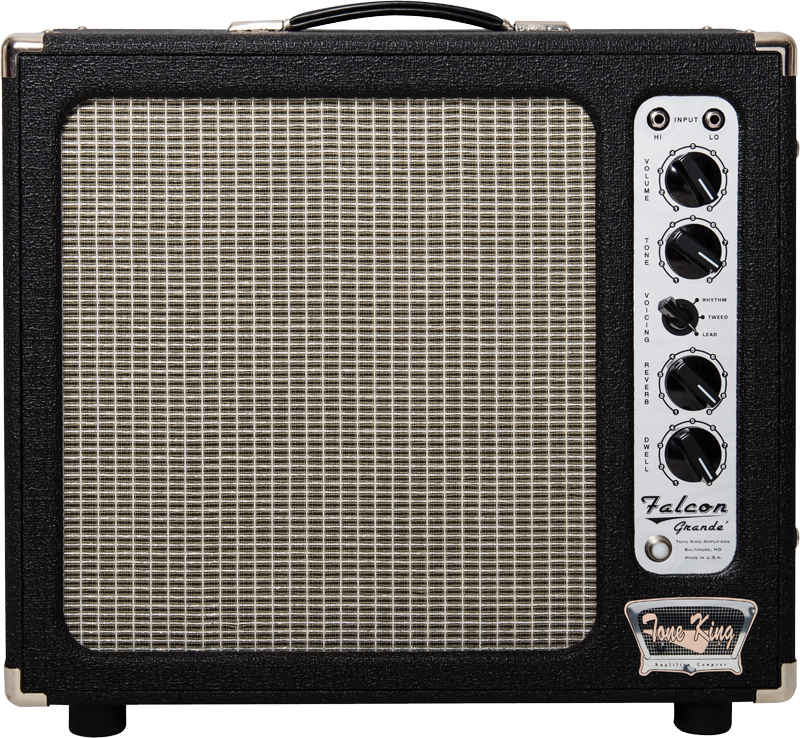 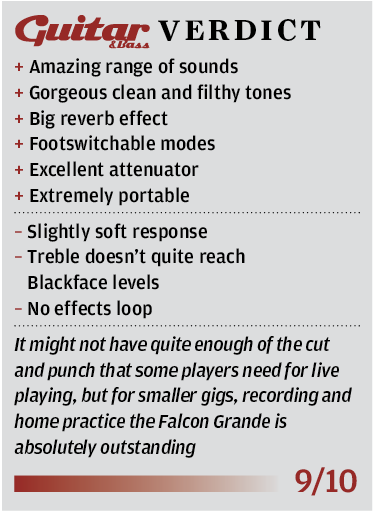