With designer Bill Krinard back on board at Two-Rock, this latest offering promises vintage and modern tweed voicings in one amp. 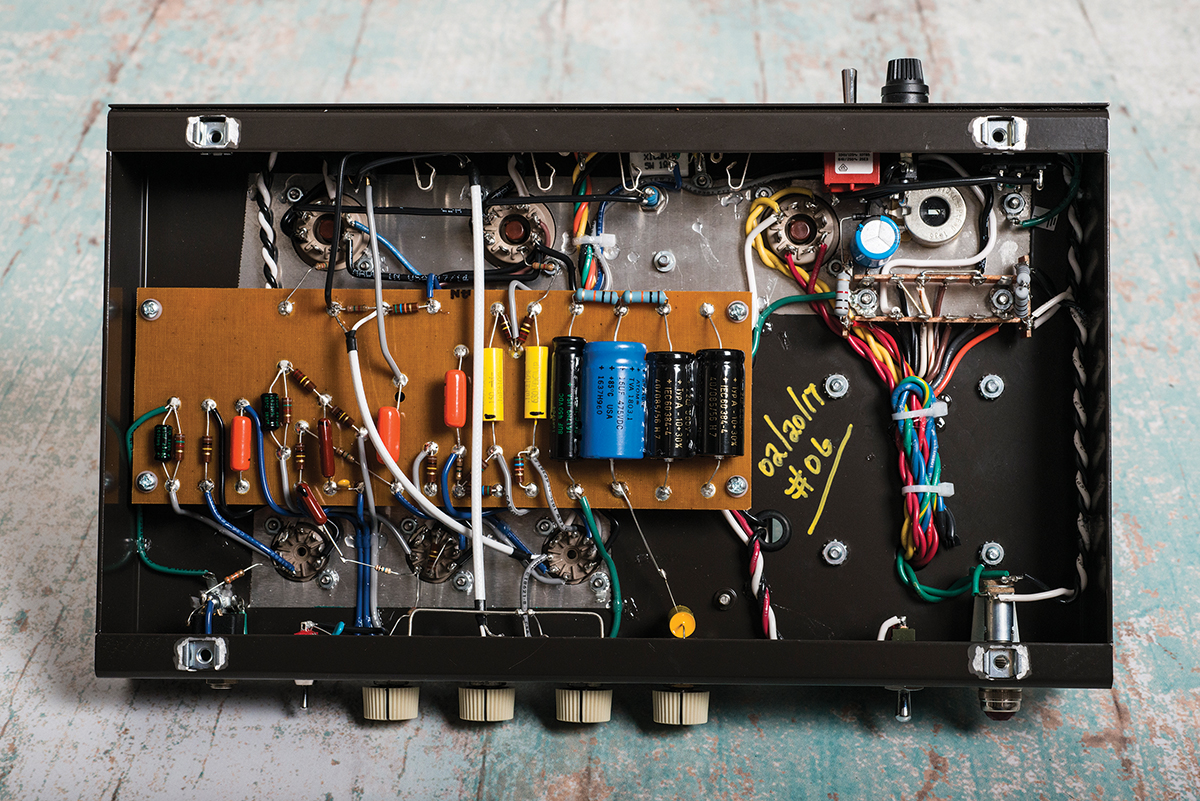 Two-Rock amps have become a regular sight on stages and studios all over the globe thanks to their flawless build quality and stunning interpretations of big-bottle blackface tone. The Burnside is a little bit different, however, as it takes inspiration from further back in the timeline of guitar amp evolution and attempts to offer a new take on tones from Fender’s classic and hugely influential tweed era. 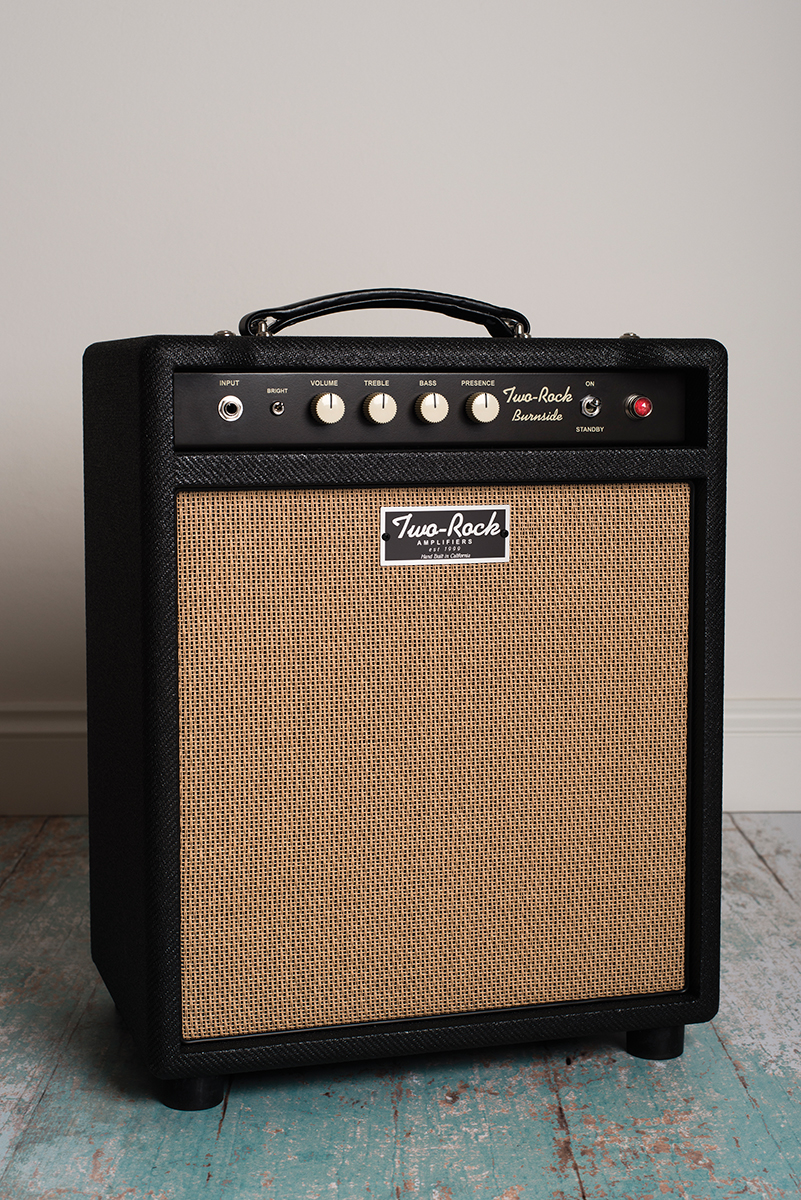 Two-Rock amps have always won plaudits for the quality of their internals but for our money, the Burnside is the company’s best-looking amplifier to date. With an en vogue black lacquered tweed cabinet and a wheat-coloured woven grille cloth, plus a stylish metal nameplate adorning the front, this amp looks really smart – and of course, it’s all flawlessly finished.

Available in combo and head formats, the Burnside’s front panel provides easy access and on the back panel you’ll find passive effects loop connections and three speaker outputs. This combo has a Warehouse WGS G12C speaker and its 75W power handling is copes easily with the Burnside’s 18W 6V6 powered output. 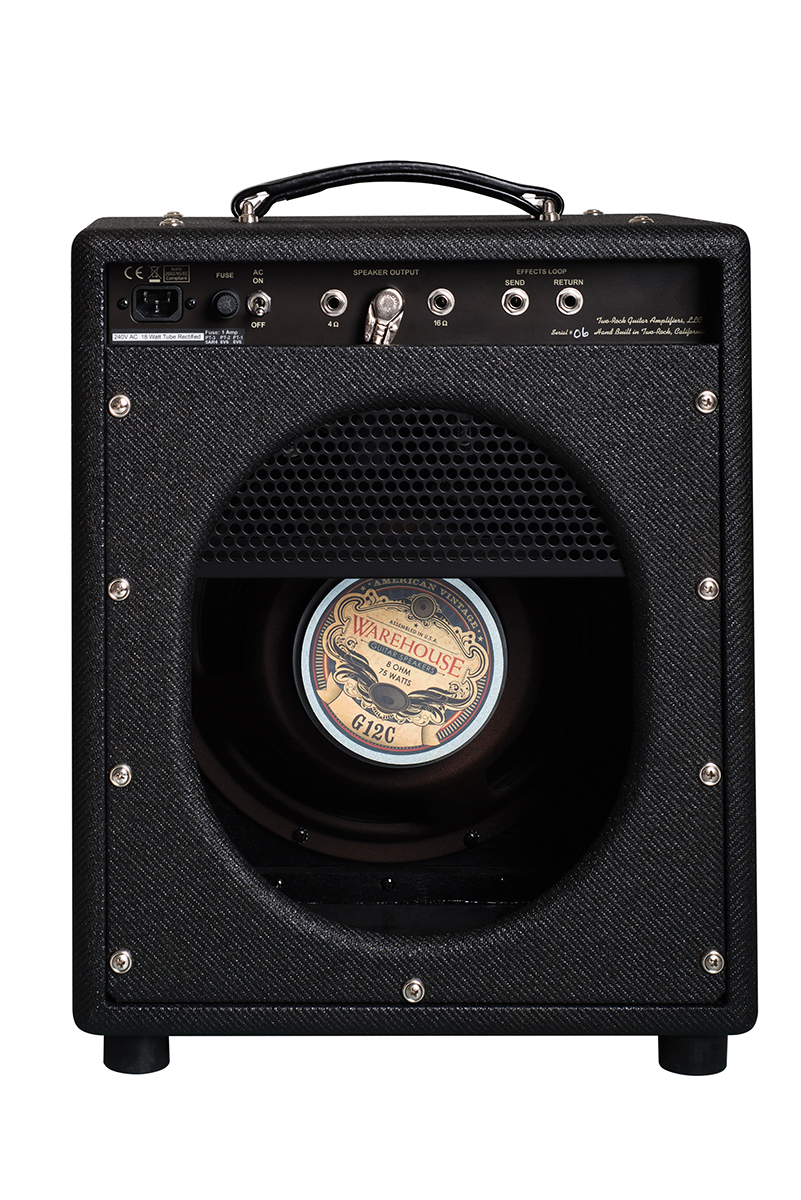 It’s billed as Two-Rock’s version of the wide panel tweed circuit but no mention is made of a specific tweed amplifier. With treble, bass and presence controls we ventured a 5E4 Super with the GZ34 rectifier beefing up the power supply and Two-Rock confirmed this.

Since the Burnside operates in fixed-bias mode, easy access is provided to a measurement point and a bias potentiometer from the outside of the chassis.

The internal circuitry is mostly mounted on an eyelet board with a small amount of point-to-point wiring. The majority of resistors are carbon comps and signal capacitors include Sprague Orange Drops and Mallory 150s.

In Use
If, like this reviewer, you’re used to using tweed amps with three controls – and you only ever really use two of them – the provision of separate treble and bass controls is a little disorienting at first. You won’t be able to do the usual tone and volume balancing technique you’re familiar with, but the increased controls are actually very powerful once you get to know them.

As described, the Burnside covers vintage and modern flavours of tweed tone and you need to get to grips with the way the controls and bright switch assist you to access the full range of sounds.

Bright switches were a feature on various blackface Fender amps, but it was never a tweed thing. Although some of the later and bigger tweeds could deliver extended high frequency sheen, many low-and mid-powered tweeds tended to have slightly rolled-off treble. The Burnside’s bright switch gives you that extended treble, but things can get edgy and shrill if you don’t adjust volume and treble accordingly. 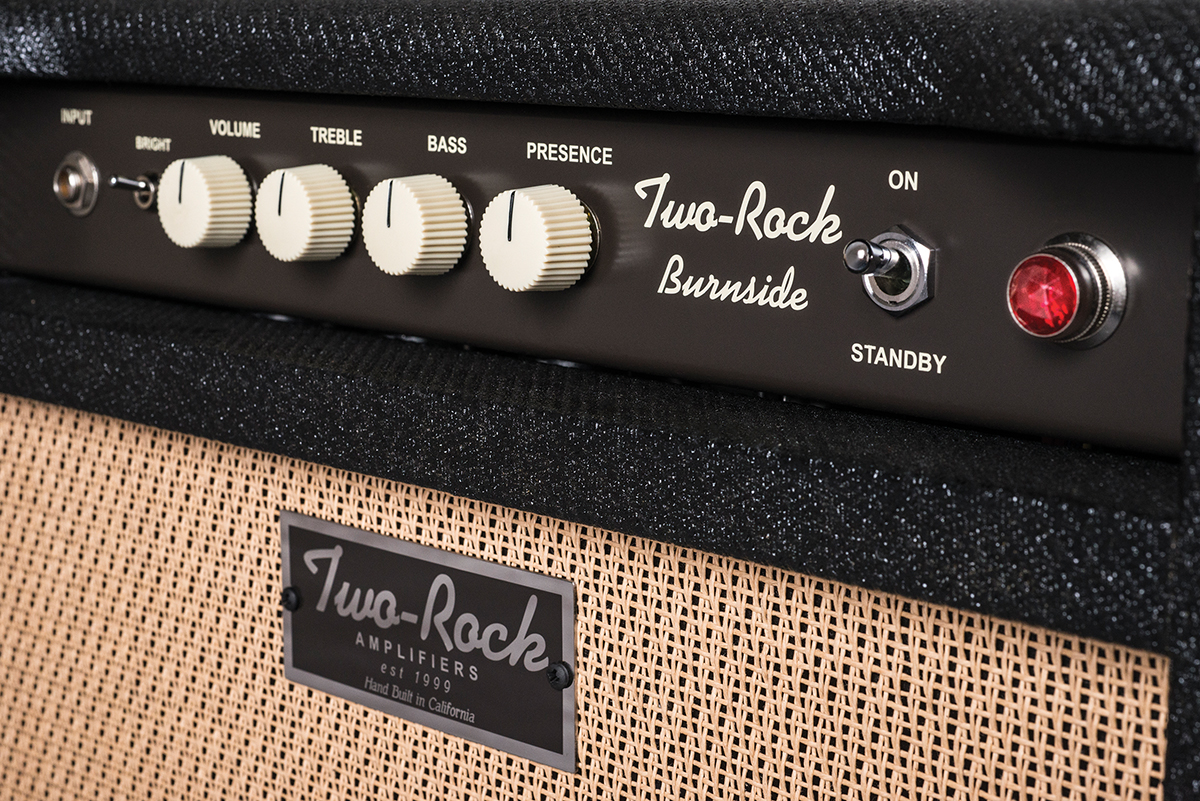 As with the various tweed Deluxe models, there’s an interaction between the Burnside’s volume and treble control. So turning up treble simultaneously brightens the sound and increases gain. With the bright switch engaged, you may feel inclined to sweeten things by backing off treble, but you need to increase volume to maintain the same amount of drive. On the other hand, the bright switch allows you to brighten the tone without increasing gain, so in a sense you get brightness without compromising clean headroom.

With late-50s big box tweed and blackface-style tone circuits (and this also applies to many amp brands in addition to Fender) the bass control’s function is to shape the low end to retain definition and prevent boominess. The Burnside’s bass control performs differently.

Roll back the treble and presence, roll off the bass, then crank the volume and you get a sweet small box tweed tone with tight, snappy bass, and full midrange. Slowly turn up the bass and there’s a dramatic increase in gain that is mostly confined to the bass and low midrange.

It’s a delicious, horn-like grind and the Warehouse speaker holds its composure in a way an old Jensen never could. Pushing the bass, things get even hairier as the overdrive extends higher into the midrange.

Things continue in this vein until the very last twist of the knob where the upper mids suddenly and unexpectedly dip. It’s a fabulous setting that makes our T-style test guitar sound more like a baritone saxophone on the low strings, while the sweetened plain strings drift effortlessly into blooming sustain.

Having established its credentials as a fire-breathing early 50s handful, it’s time to explore the Burnside’s more nuanced and refined side. This is an amp that can certainly do the pretty and shimmery stuff, though we can’t quite nail the ethereal, floating harmonics of a vintage tweed Super or Deluxe. 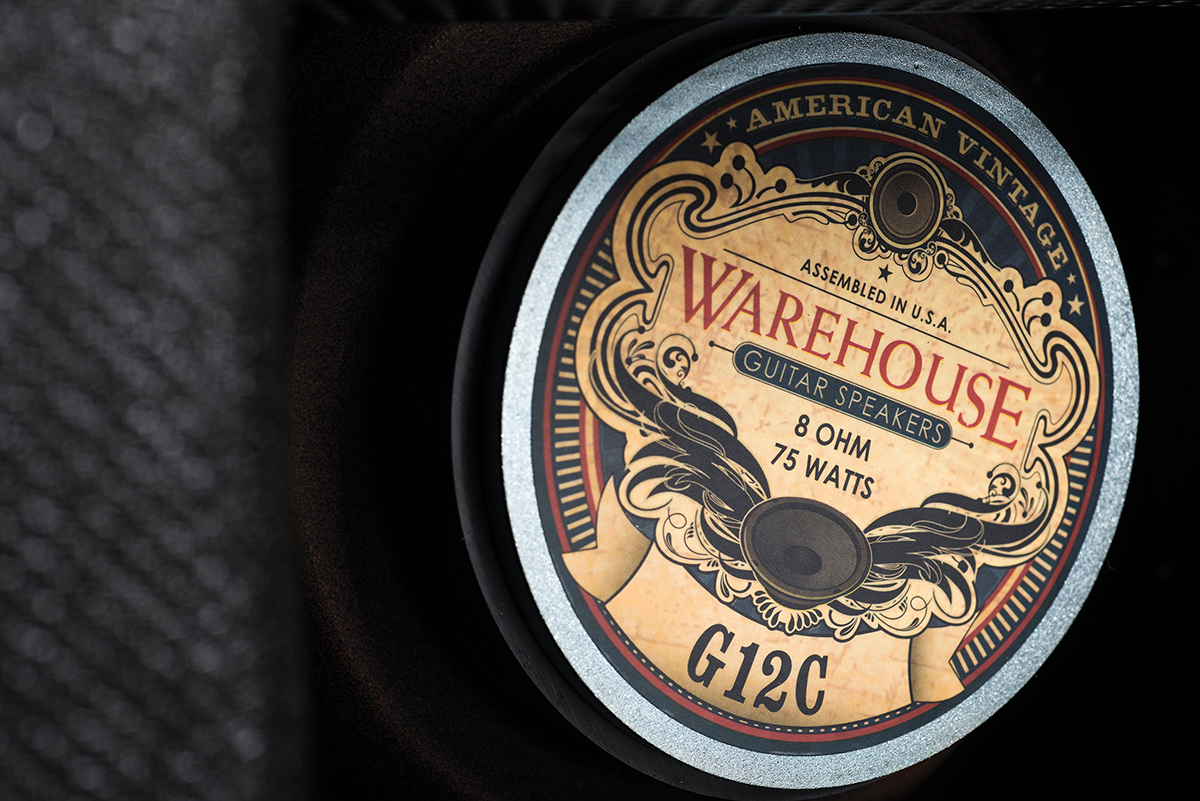 Thinking it might be attributable to the ceramic magnet speaker we try running the Burnside through a Celestion Blue and a Fane A60 – both of which have alnico magnets. This reveals that the Burnside has no shortage of upper harmonics and that Two-Rock has chosen a speaker that matches the Burnside’s circuit and cabinet particularly well.

The Warehouse softens what might otherwise be quite aggressive, strident highs and provides an interesting upper midrange bite that cuts through mixes particularly well. However the Warehouse’s 134Hz resonance frequency puts it in the danger zone for semis and semi-solids and the low-mid feedback is hard to avoid with guitars like big-bodied Gretsches and ES-330s.

Tweed players will also notice how a lack of speaker compression and breakup combines with the robust power supply. The result is less of a ‘vintage’ touchy feely quality, but the firmer and more robust response will be a positive for many. Two-Rock confirms you can change the GZ34 to a 5U4, 5Y3 or a 5V4 for a softer feel. Having tried all three, a 5V4 or 5U4 provides more vintage touch dynamics and a far sweeter treble response without losing bass cohesion, but the 5Y3 is a tad soft.

We find the Burnside’s stock circuit is oriented a little on the bright side, which means that the treble and presence controls mostly end up being used for cuts rather than boosts. The volume control’s hair-trigger contour makes it tricky to fine-tune the required amount of overdrive, however this is somewhat related to the tone control settings. 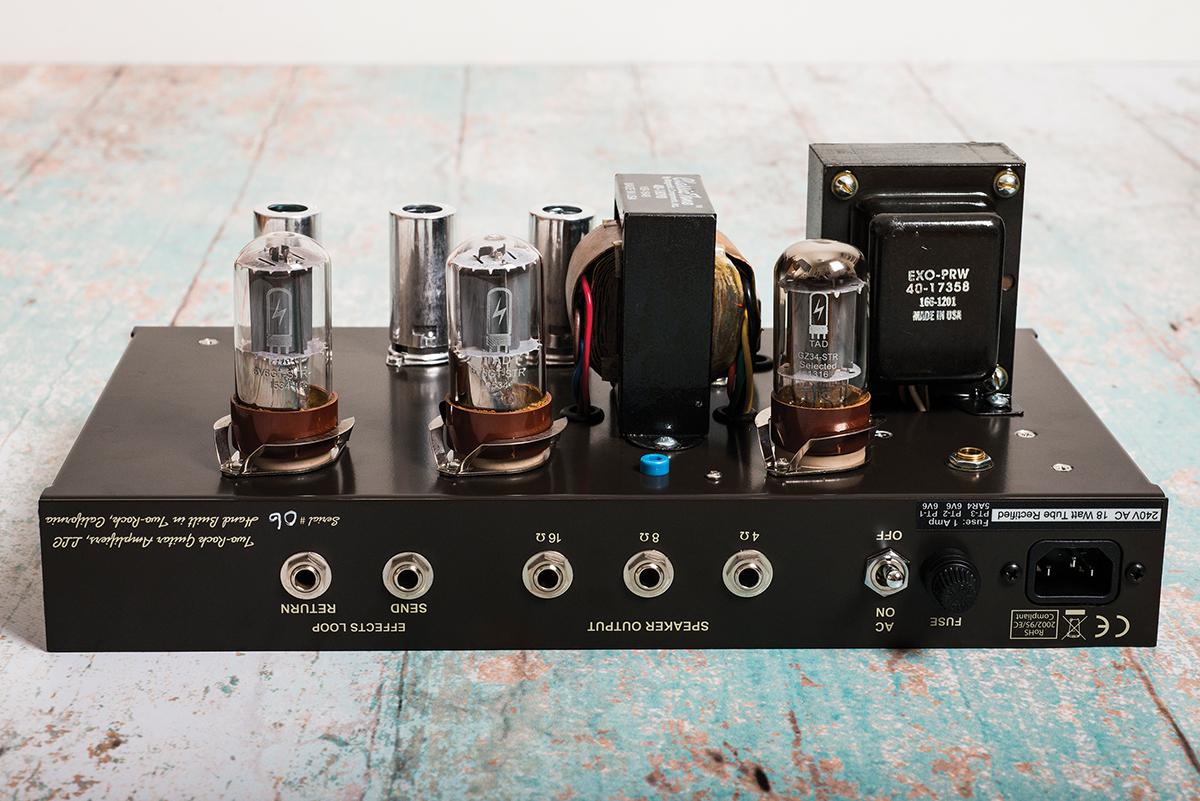 Two-Rock is to be commended for adding a modern twist to the tweed Super format and it’s good to know that the Burnside can deliver old-school tones, too. 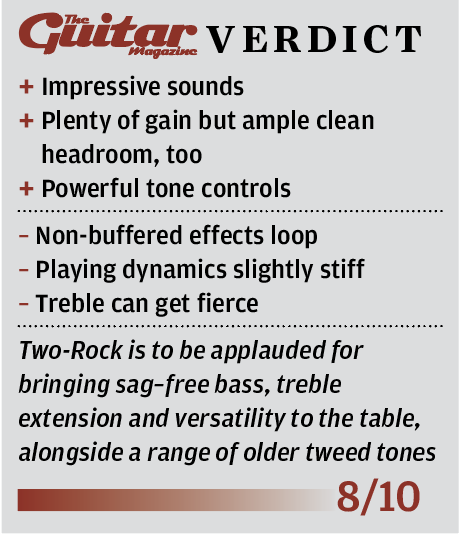