With its sheet metal body and internal pickup, the Tyyster Pelti is more than a retro-modernist fancy. 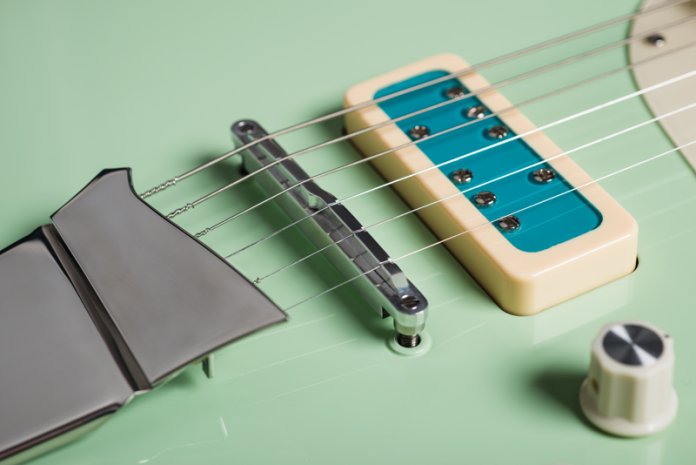 Maybe it’s something to do with the persistent cold, or the long winter months with little or no sunlight, but playing the blues has been a popular pastime throughout Scandinavia for decades. Finnish luthier Ville Tyyster’s passion is electric and acoustic blues and he’s always been drawn to resonator guitars, in addition to the usual electrics.

Ville’s dream was to design an electric guitar with a resonator tone, but his early attempts produced mixed results, which saw feedback problems limiting his efforts. After a `creative pause’, Ville revisited the concept, decided to dispense with the resonator cone and instead to use a sheet metal body, which would transfer its tonal characteristics to the guitar’s pickups.

Peeking inside the Tyyster Pelti reveals a fully hollow body with two stiffeners spot-welded across the top. The neck and pickups are attached to a longitudinal beam that’s fixed to the body at both ends. The upshot of this arrangement is that the front and back of the body are free-floating.

Painting a bolt-on neck to match the body is certainly a road less travelled, but colouring the fingerboard is even more unusual. Even so, it looks superb and the fretwork is top-drawer. The only downside of the painted neck is `disappearing’ dots. The side dots are quite hard to see and I found myself struggling under normal lighting conditions, especially when playing slide. Before I even mentioned this to Ville, he told me that he’d be using black dots in future, which should fix the issue.

The humbucking pickups are also unusual because they have two individual coils, which are offset to span three strings each. The pups’ specs include AWG 43 wire and ceramic magnets, but customers can request Alnico for a mellower tone.

Pelti is actually a Finnish word for sheet metal, and in this case it’s steel because the internal pickup requires a ferromagnetic material. Specially made for the Pelti, it’s a very narrow humbucker located in the space between the rear pickup and the bridge itself. 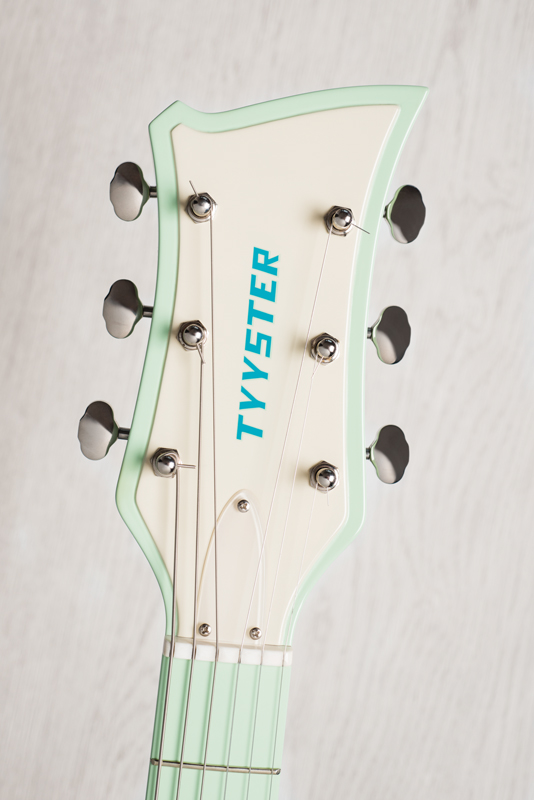 The open-gear Schaller tuners add to the retro vibe, but more importantly they’re smooth and accurate, whichis vital for a guitar that’s designed to be played in multiple tunings. Two of the three control knobs operate the external pickups. Youget volume and tone, with theformer doubling up as a push/pull phase switch. The third knob pulls up to route the internal pickup to the main output and also adjusts its volume.

The Pelti is supplied with two intonation-compensated bar bridges, for `plain’ and `wound G’ string sets. The post spacing can also accommodate a tune-o-matic bridge, which may intonate more accurately, but the extra weight could hamper the Pelti’s tone.

Since the Pelti is designed for bottleneck just as much as regular playing, it arrived fitted with a set of 11s. For hardcore slide playing, heavier strings are recommended, but I found this `in between’ gauge quite workable. The neck has a reasonably slim `C’ profile, which retains a fairly constant depth along its length and the action, as supplied, was medium-low. 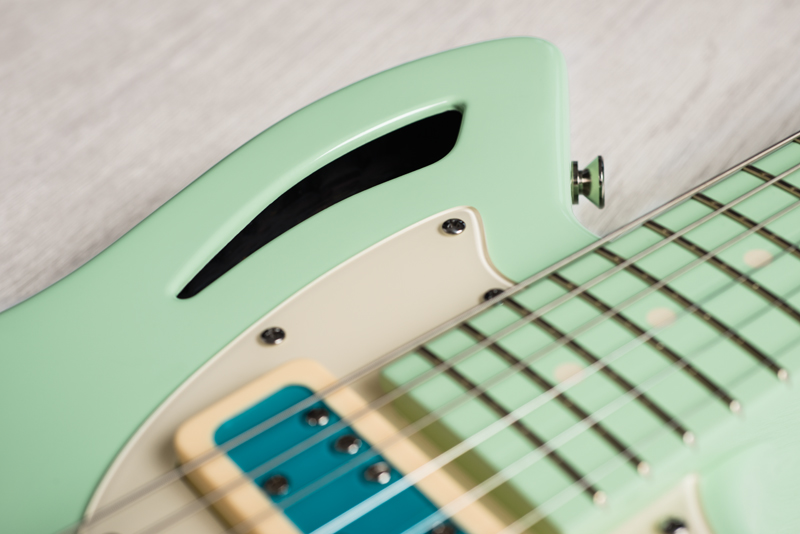 Just like tonewoods, many metals seem to have their own sound. Had the body been brass, I might have expected a brighter, quicker and more harmonically complex tone. Instead, the steel has a warmer, smoother and more compressed response ± but there’s still a discernibly `metallic’, boxy clang. The best overall description would be sweet and mellow brashnessº

The Pelti’s acoustic tone is lively and responsive. It’s fairly loud, too, but there’s less sustain than I’d expect from a wooden semi-solid or a conventional acoustic.

Sadly, the internal pickup isn’t an unqualified success. The output level is fairly low, so it requires a low-noise/high-gain preamp. The directly injected tone is very interesting ± it’s almost as if a miniature dynamic microphone had been installed inside the body.

This is something that could certainly be used in a recording context – on its own or in conjunction with the amplified sound. However, I found the pickup so susceptible to feedback that it couldn’t be used, even with low-power guitar amps.

The Pelti is supplied with a stereo cable and a splitter box, but when  I tried running the signals through two separate amps I encountered ground loop issues. The wiring scheme also prevents you from blending in some of the internal signal with the external pickups, to lend the overall tone a tad more `acoustic’ quality. 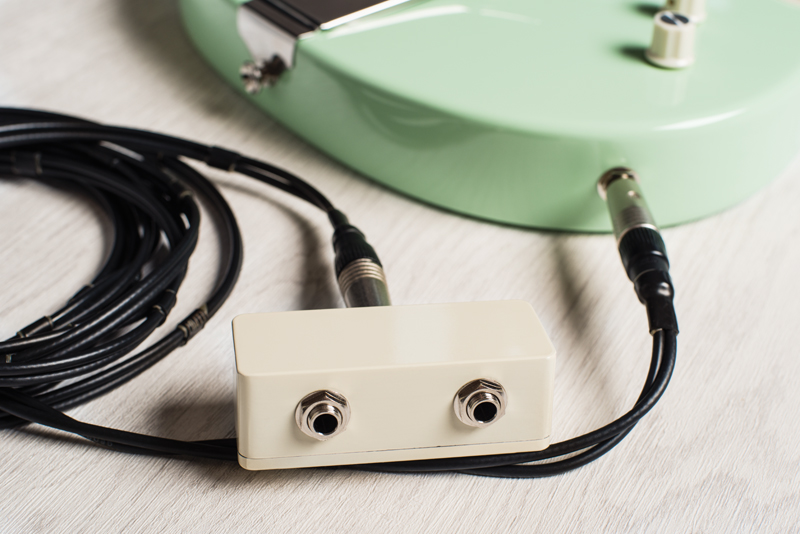 Having dealt with the Pelti’s drawbacks, there’s a great deal to recommend it. The external pickups produce exceptional results, offering brightness, clarity and touch sensitivity. Through a clean amp, they offer excellent definition, with the Pelti’s natural acoustic qualities very much a part of the sonic mix.

There’s a touch of Firebird-style humbucker about them, coupled with a vintage P-90 midrange snarl, a solid bass thump and a dusting of chime over the top. All three settings are distinct and the tone control’s gradual roll-off adds plenty of sonic shading.

I particularly liked the out-of-phase tone for its hollowed-out, nasal honk, which sounds not unlike an old blues 78. For slide work, clean arpeggios and fingerstyle playing, it’s an inspiring sound and, helpfully, rolling back the treble fattens up the tone rather than dulling it down.

The atmospheric and surprisingly ethereal clean tones take on a meaner bite as you move into overdrive, and the touch response encourages you to dig into the strings with your fingers and work the amp. Feedback comes on quite quickly, so large, loud amps probably aren’t an ideal match. The Pelti works particularly well with medium-powered valve combos.

Ville Tyyster certainly deserves credit for his efforts to create something original and `lo-tech’, but the internal pickup doesn’t entirely convince. However, in every other regard, the Pelti really does. It juxtaposes pawnshop chic with excellent build quality, distinctive looks and unique tone. 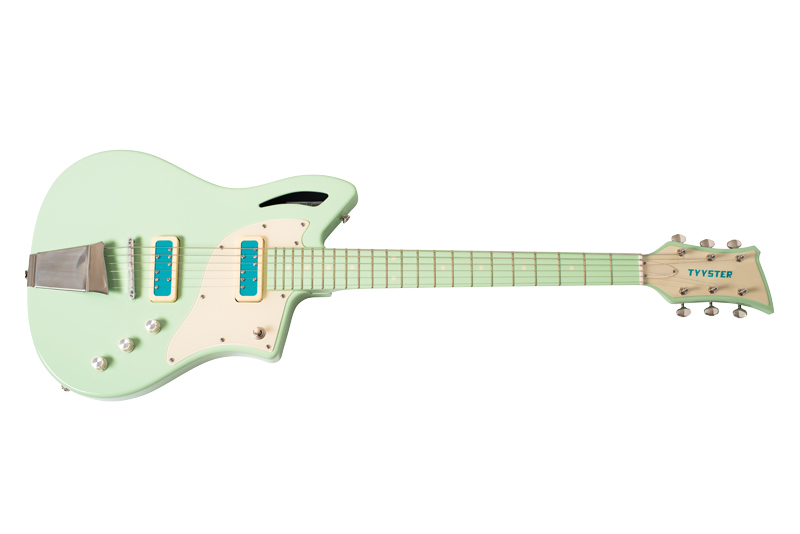 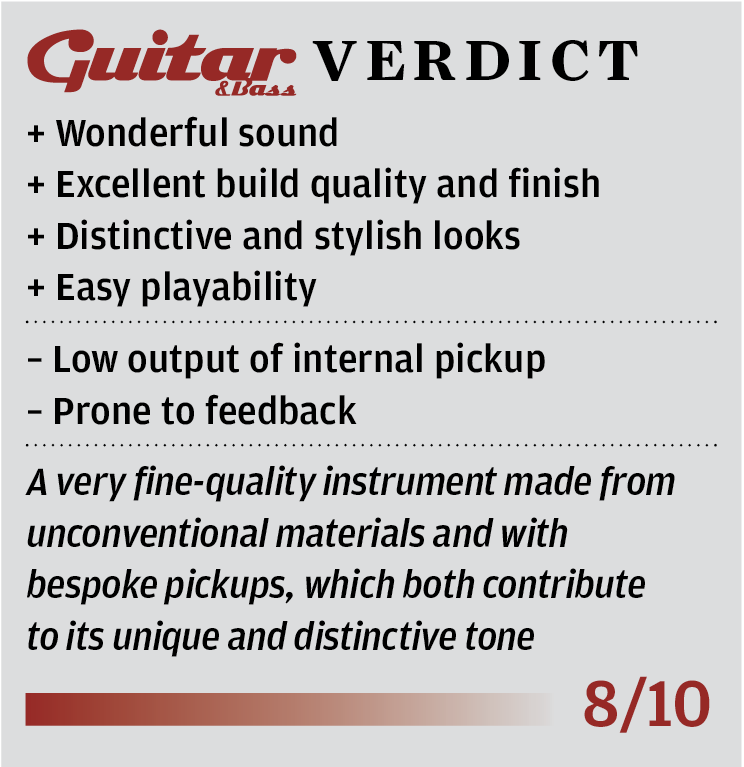